As a PC system builder in my dark and murky past, I was reasonably familiar with ECS, or to give it its full moniker, Elitegroup Computer Systems. Invariably its products were specified for budget systems where cost was more important than capability. Despite the fact that ECS was, and still is, a high volume manufacturer, its boards were seen as a poor and often unreliable alternative to the better specified alternatives. In fact you’d be surprised how many unflattering phrases you can make from the acronym “ECS”.


With this in mind I’m sure you can imagine my concerns when regarding this review. This was despite a succession of genuinely innovative recent products from ECS, not least of which was the eminently sensible dual-platform PF88 Extreme, accommodating both Socket 939 AMD CPUs and also LGA775 Intel processors by way of nothing more than an add-in daughter board. Nevertheless, I was all too aware that it takes more than one moment of genius to build a reputation. 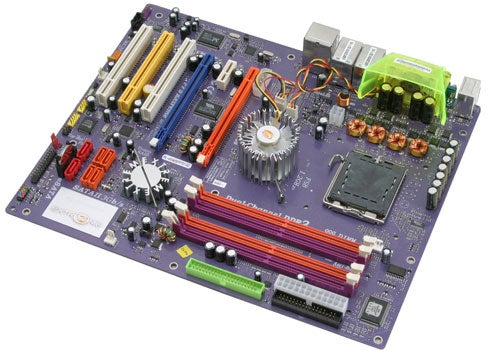 The ECS PF5 Extreme is an LGA775 motherboard based on Intel’s popular 945P Express (945P + ICH7R) chipset. Although Intel positions this chipset as a value desktop part, it in fact boasts some high-end features including 1066, 800 and 533 MHz system bus support, PCI-Express x16 graphics, dual-channel DDR2, SATA RAID and high definition audio to name but a few.


First reactions on seeing the PF5 are that something is missing. The clean design and nearly invisible traces combine with what seems like acres of bare, purple PCB to give the impression of it being almost spartan in nature.


Despite the illusion, it’s pretty much all there. Three PCI slots sit alongside a pair of PCI Express x16 slots and a single PCI Express x1 slot. A bank of five blue LED status lights sit alongside each of them, bar the primary PCI Express x16 slot. These either flash to denote that the slot is empty or if the card is not seated or functioning, correctly, or light constantly to denote the slot is in use and is functioning properly. Surface-mount LEDs would have looked neater than the clumsy looking 5mm units ECS opted for.


I mentioned there are two PCI Express slots on this motherboard but before you start thinking SLI let me set you straight. You can run dual graphics cards, and from these you can power up to four displays, but they run discretely. At this point nVidia hasn’t released drivers for SLI on anything but its own nForce4 chipset, but ATI claims that Crossfire will work, though I couldn’t test this. If you do populate both PCI Express slots, the x1 slot that sits between them is disabled due to PCI Express bandwidth limitations.

The locking lug on both PCI Express slots is small and not especially finger friendly. It’s also a nightmare to release when used with bulkier graphics cards.


Two IEEE 1394a (FireWire) channels are available, one of which is a four-pin connector and another coming off a motherboard header, both powered off the VIA VT6307 controller. Dual LAN comes courtesy of the Marvel 88E8053 Gigabit controller and Realtek 8100C, the latter of which uses the PCI bus rather than the PCI Express bus which is a shame.


The South Bridge is passively cooled using a small and not particularly efficient looking cooler which has the word “EXTREME” machined around its circumference. The taller North Bridge sink is fan cooled and although this and the power circuit cooling fan, which I’ll discuss in a moment, both take up a three-pin fan header, the board still has a further three available, one of which is reserved for the CPU fan.


Layout is very clean and uncluttered though not perfect. The 24-pin ATX connecter is right alongside the floppy connector which can be fiddly. Also we run into the common problem whereby the graphics card sits too close to the memory slots to be able to properly add or remove modules without unseating it. 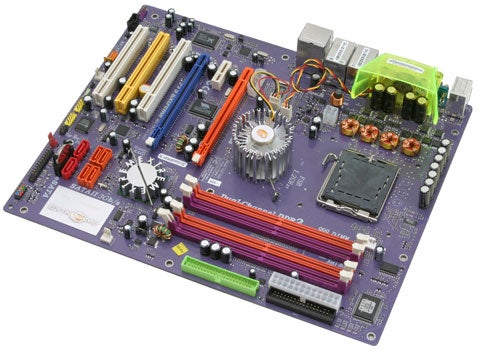 One thing that’s sure to catch your eye is the lime green shroud that sits nestled amongst the rear hardwired connectors. This uses a small cooling fan to draw air over the power circuit components and exhaust it out of the rear. This may seem like a needless gimmick that everyone seems to be jumping on at present, but my trusty Raytek MT4 reported a MOSFET temperature of 75 Celsius even with the fan blowing out a gentle stream of tepid air so perhaps it’s not entirely pointless.


Because of its design, the cooling shroud actually takes up very little of the I/O connector real estate which still manages to cram in PS/2 keyboard and PS/2 mouse connectors, four USB and two RJ45 LAN connectors, a four-pin FireWire connector, a serial port, five audio jacks and an optical S/PDIF in and out, both of which have dust shutters. 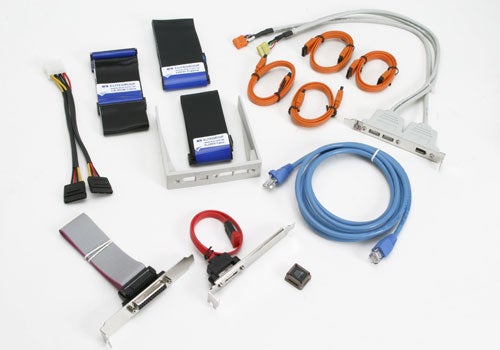 Bundled alongside the board is an unusually comprehensive set of extras. A set of regular flat IDE cables sit in place of the increasingly ubiquitous rounded IDE cables but accompanying them are a set of four SATA cables, an Ethernet Cross Over (CAT5) cable, a four-pin Molex to dual SATA power adaptor, a parallel port bracket, an external SATA bracket and a further bracket sporting two USB and a single FireWire port. The latter also comes supplied with a 3.5in drive bay insert so by releasing three screws the connectors can be removed from the expansion slot bracket and attached to the bay insert making them available from the front of your PC.

An odd find in the box was what looked like a spare BIOS chip sat in a plastic housing. This is in fact part of the ECS Top Hat Flash System and enables you to restore a corrupt BIOS by placing it over the onboard hardwired BIOS chip and using it to boot the system into Windows, from where the most recent BIOS file can be downloaded and flashed. 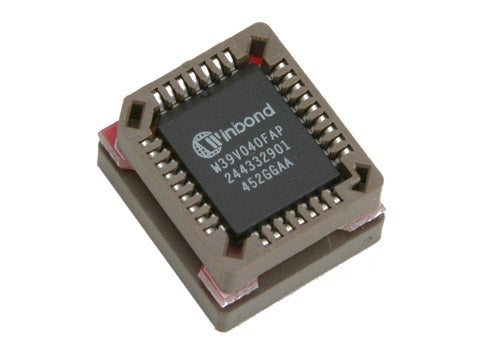 The manual is impressive, and while it doesn’t rank with the greats it was clear and well laid out and vastly superior to the majority.


BIOS options were fairly comprehensive and adequate even for demanding users. Odd was the lack of any option to set CAS latency, made more of an issue by the board’s apparent inability to correctly set SPD values from my PQI DDR2 modules. Rated to run at 4-4-4-12 the board insisted on setting them to 4-5-5-12, and forcing them to x-4-4-12 resulted in a CAS latency of 5 and thus a setting of 5-4-4-12. ECS clearly need to implement CAS latency setting to overcome this problem.


The PF5, like many current motherboards, uses dynamic overclocking to boost board performance without any user intervention. Unfortunately there was no way do disable this function in the BIOS without enabling the overclocking function and locking the FSB at 200MHz. As a result, the 3DMark and SysMark tests were run at the default setting, which set an FSB of around 215MHz and thus ran my 3.6GHz CPU at 3.87GHz, I then locked the FSB to the proper 200MHz setting and ran them again for comparison. 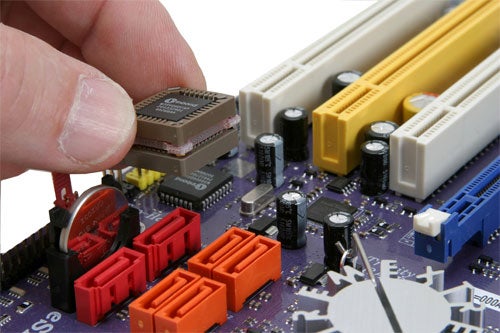 Finally, a quick note about the onboard audio. Although quality from the eight-channel Intel High Definition powered Realtek Codec was comparatively very good, through headphones there was a lot of blitter noise as the mouse cursor was moved. This may be isolated to my test conditions but I’d sooner mention it than not.


On balance the PF5 was a very good performer with some creditable pluses and some niggling weaknesses. It bares all the hallmarks of a product from a company determined to bring new and innovative ideas to a competitive market but who are still finding their feet to some extent. But for a street price around £90 you do get a lot of technology for your money.