Speaking from my own personal experience, ECS motherboards haven’t had the greatest reputation in the market when it comes to performance and high-end features. However, over the last year or so it seems that ECS has worked hard on improving its image with a new range of high-end motherboards.


The motherboard I’m reviewing here, the 915P-A, isn’t one of these high-end offerings, but still reflects the company’s new approach by offering an innovative new feature called AGP Express,


As its name suggests, the 915-A is based on the 915 chipset. As such it supports DDR2 and PCI Express, with two slots of the former, a single x16 PCI Express for graphics and two x1 PCI Express slots for peripherals. There are also a further two PCI slots for your peripherals. A downside though for anyone upgrading an older PC, is that there is only one IDE connector supporting two drives. This is a limitation of the 915P chipset, but you do get four SATA connectors in exchange. It would have been good though if ECS had provided a SATA to EIDE converter for upgraders. The 915P-A only features the plain ICH6 rather than the RAID enabled version. 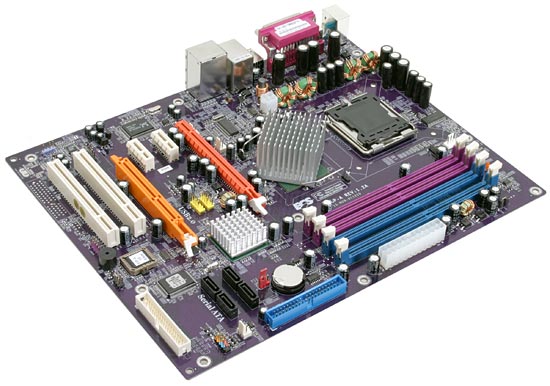 In addition, ECS has also added two DDR memory slots. Moving to PCI Express normally means dumping your AGP card and switching to DDR2. However, thanks to AGP Express and the DDR sockets ECS is proving a cost effective upgrade path. If you’re desperate to upgrade your computer, but can’t afford to get all the components at once, then this might be a suitable option for you.


So what is AGP Express? Essentially, the bandwidth of two PCI slots have been fused together to create an AGP compatible interface. However, this still doesn’t quite match the performance of a proper AGP implementation. The result is lower bandwidth and no support for ‘DIME’, the AGP feature that enables the graphics card to access system memory. However, this feature was not frequently employed by applications so is unlikely to be missed. Nevertheless, as you’ll see from the benchmarks, AGP Express proved to be less than ideal for 3D applications. 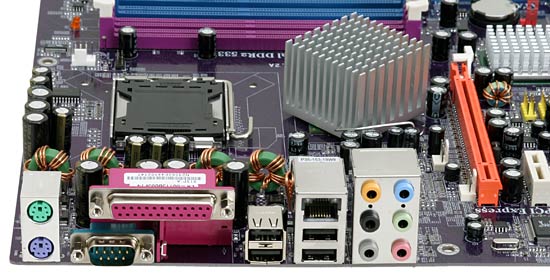 The I/O configuration consists of two PS/2 ports, one serial, one parallel and four USB 2.0 ports, an Ethernet connector and six audio sockets. Onboard Ethernet is provided by a Realtek Gigabit controller, which sadly connects over the PCI bus rather than PCI Express. Using the PCI bus rather than the PCI Express bus means lower performance and higher CPU usage, not to mention potentially affecting the bandwidth available to the AGP Express slot, as all PCI devices shares the same bus.

The C-Media audio controller offer eight-channel Intel HD compliant audio. All of the rear ports can be reconfigured for various output and input options by using the supplied software application. There is no S/PDIF option supplied, although there is a header on the motherboard that would enable this to be added via a rear bracket.


ECS hasn’t supplied any extra connectivity via rear brackets of any type though. There are a further two headers that would provide another four USB 2.0 ports so omitting the bracket ports seems quite stingy. By contrast, Biostar managed to supply at least one bracket with its budget boards. Even more disappointing is that you only get a single SATA cable and a single SATA power adapter. This means that you’d have to buy an additional three cables if you wanted to take advantage of all the SATA connectors in the future. 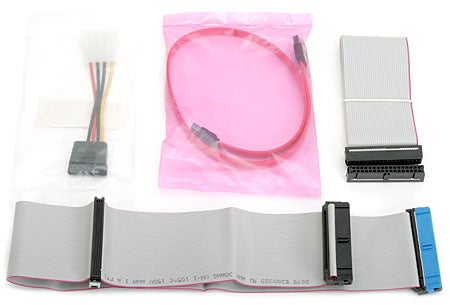 On the upside, the 915P-A is passively cooled and ECS has even fitted a heatsink to the ICH. Board layout is reasonably tidy and there are three spare fan connctors, not counting the four pin CPU fan connector. The only minor complaint is that to change the memory you would have to remove any PCI Express graphics card first.


Another advantage that AGP Express brings is that it (theoretically) gives you the option to use two graphics cards – one in the x1 PCI Express slot and the other in the AGP Express slot. It’s very important to note that only version 1.2a works with two graphics cards – and earlier versions can’t be made to work in this configuration even with a BIOS upgrade. However, even version 1.2a isn’t without its flaws, as during my testing I couldn’t get it to work with any combination of nVidia graphics cards. According to the technician at ECS I spoke with, this might be resolved in a future BIOS update, but currently you have to use ATI cards. Again, I didn’t have a one hundred per cent success rate with all the ATI cards I tried, but the chance that it will work is much greater. 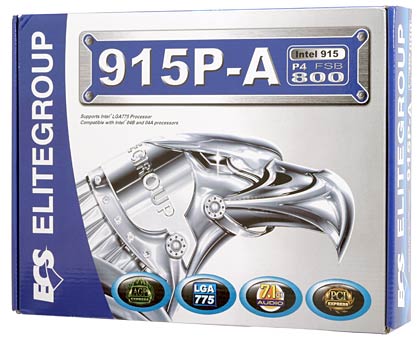 Using a Radeon X800XL and then later an X300SE card in the PCI Express slot in combination with a Radeon 7500 in the AGP Express slot worked just fine. However, swapping the Radeon 7500 for a Radeon 9250 or Radeon 9550 was a failure. I could boot into Windows, which I couldn’t do with the nVidia cards, but neither of the 9000 cards were recognised in conjunction with a PCI Express card.

When it does work, it means that you can have four displays, as long as you are aware of the limitations. The implementation could do with some further tuning, but as an inexpensive path to a quad display solution it has plenty of potential.


To test some of the various configuration options of the 915P-A, I set it up in three different ways. To remove as many bottlenecks as possible the tests were run using a 3.6GHz Socket-775 Pentium 4 processor, a 250GB Maxtor SATA hard drive, 1GB of PC4300 DDR2 memory, and in another test with 1GB of PC3200 DDR memory. For comparing the graphics performance a PCI Express and an AGP GeForce 6600GT card were used. 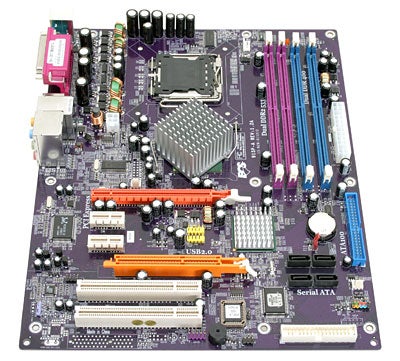 Looking at the performance numbers there are clear differences between the different configurations. In SYSMark 2004 the overall score using DDR1 memory and the AGP Express slot produced a score of 209. Swapping the graphics card for the PCI Express solution upped the score to 211, while changing the memory to DDR2 again increased the score to 214.


The small increases of a couple of points with each upgrade may not seem like a big deal, but when you look at the 3D scores you’ll see a huge jump up in performance. Starting again with the AGP Express setup, the 3DMark05 score is a very low 1419. With the PCI Express card however, the score went up to 3556 and swapping the memory over to DDR2 brought it up further to 3563.


As you can see the AGP Express slot is far from ideal for game performance, but considering its not a full AGP implementation it’s no real surprise. The advantage of DDR2 memory over DDR is fairly minor, although some will take the opportunity to grab any performance increase, no matter how small. However, for most, the extra cost doesn’t justify running out to get DDR2 straight away.


At £60.05, the 915P-A does reflect its intended market cost wise, being quite reasonable for a Socket-775 board. But considering the mixed impressions I’ve had from this board I can’t recommend it for everyone. However, as an cost-effective upgrade solution or if you need a cheap quad display setup, there are few other options out there though its hardware compatibility issues should be taken into account.