Eclipse has been busting out beautiful egg-shaped speakers for years now, all featuring just a single full-range driver per cabinet. So no separate tweeter and mid/bass drivers – just one cone working all the frequencies.

The TD510 Mk2 sit just below the astounding, top-of-the-range TD712z Mk2, and present a pretty sizeable pair of faux oeuf perched on short stands. As near-field monitors they’re a decent size, but for hi-fi duties in a larger space the limitations of that single-driver arrangement are going to expose them – hence Eclipse developing a perfect partner in the TD520SW subwoofer. 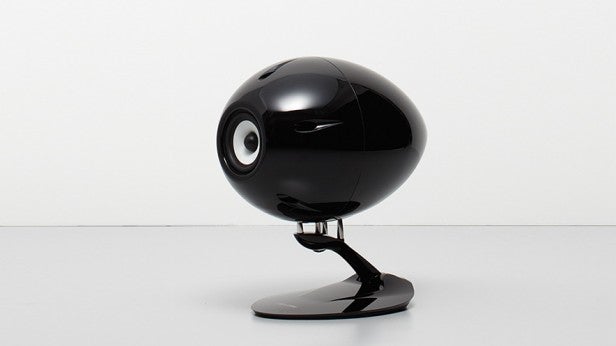 The TD510 Mk2 very much follow the same design concept and aesthetic as all other speakers from Eclipse, from the wireless TD-M1 to the sizeable 712z. Each cabinet is made from two synthetic parts joined around the middle, with the 10cm fibre-glass driver seated in the front section and a bass port in the rear.

The black dustcap in the centre of the white driver cone gives a feeling of being stared at by a pair of giant alien eyes – and I like it. Maybe not so much when I played Jeff Wayne’s ‘War of the Worlds’ through them, though.

The desk stand of the TD510 Mk2 looks very in keeping with the overall space-age style, but it’s practical too. It can be adjusted to various angles and has integrated fittings, so it can be mounted on a wall at different heights, or even on a ceiling. 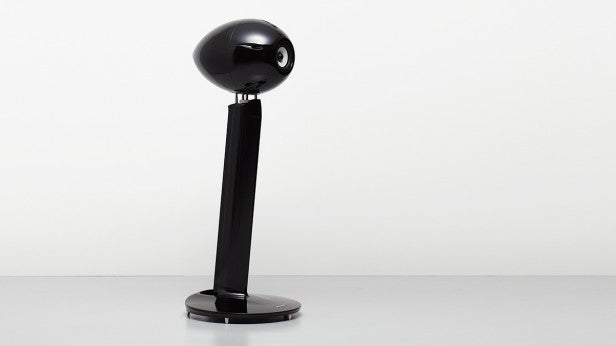 The TD510 are also available as a floor-standing model, the TD510z, but at double the cost. Sadly, you can’t upgrade the standard 510 to the 510z spec at a later date. The floor stands are pretty stunning, but that price premium really is excessive.

Both versions of the TD510 come in a choice of three glossy paint finishes: white, black or silver.

The TD520SW, by comparison, looks a little prosaic; like your average subwoofer, really. Maybe the corners are a tad more rounded, but it’s otherwise just a big black box – and yes, it does only come in black.

On either side of the glossy, beautifully finished cabinet are chrome-framed round grilles to hide the drivers, while the front has an LED-lit status panel. Connections are all around the back, with the option of either using it hooked up to a subwoofer pre-out or to your amp’s speaker terminals. Both sets of input have dedicated volume trimming and low-pass filter control knobs, which are motorised so they can be adjusted via remote control. 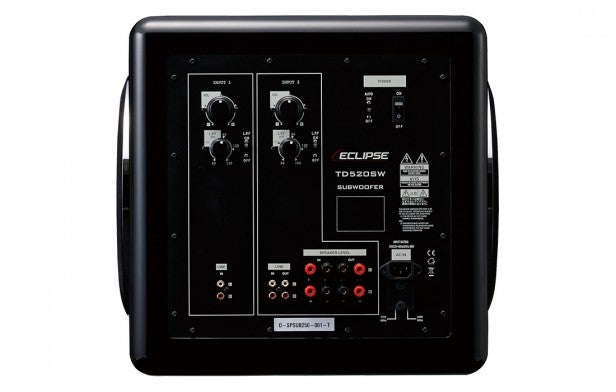 Unusually, the TD520SW uses a pair of comparatively small 20cm drivers, rather than one larger-diameter cone. This is intended to maintain the pace and timing that’s become the trademark of Eclipse’s sound, without compromising the bass depth you’d expect from a large sub; huge drivers are difficult to shift at speed.

As mentioned, there’s a remote control for the sub, but it’s an unattractive plastic unit. You’d hope for more at this price. It does the job, though.

Eclipse advised me to give the sub a bit of room to breathe – at least a foot away from the wall – so that’s what I did. It means positioning this imposing cube is a little tricky, and since the TD510 are rear-ported, you’ll need to give them a bit of space, too.

The results are worthwhile, though. And remember, if ground space is limited, this 2.1 system is still preferable to having huge floor-standing speakers hogging the room.

Setting up a subwoofer is always a balancing act. You don’t want it taking on too much of the work and thickening the sound, but you also need to avoid that obvious disjoint between mid-range and bass. There’s also some personal preference involved, of course. Once I hit that magic spot for me, this Eclipse combo just soared.

That pace and impeccable timing that Eclipse strives for – and for which it has become famous – is all there, and isn’t dragged down one tiny bit by the subwoofer. The treble and upper mid-range are both agile and sweet. 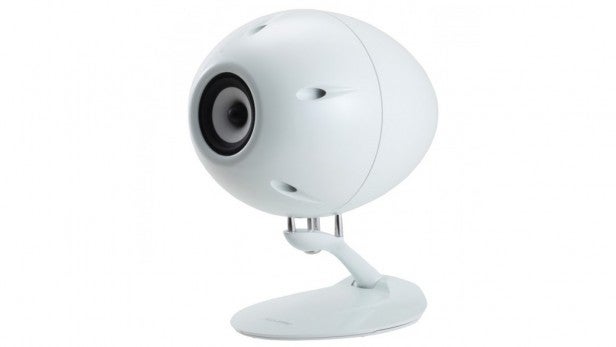 Listening to Jesca Hoop’s ‘Memories Are Now’ album, this system shows off its deftness of touch and remarkable clarity. The gentle bass rumble at the close of ‘Animal Kingdom Chaotic’ is nicely controlled and perfectly subtle, as is the bass drum thumping along in the background of ‘Cut Connection’. The sublime ‘Pegasi’ sees the TD510 at their pinpoint-precision best, seemingly conjuring Hoop and her guitar out of thin air, with the speakers disappearing like very few other models of this size can.

Moving onto Massive Attack’s ‘Mezzanine’, the sheer force of the bass that builds up through ‘Angel’ seems to come less from the volume of air being shifted as from the speed at which it thumps you in the chest. It’s less earth tremor and more thunder crack – and it comes as a bit of a revelation, to be honest.

As someone who’s owned a pair of TD712z Mk2 – and sold them on, to my lasting regret – I can tell you that the TD510/TD520SW combo is the equal of those magnificent speakers and then some. It makes me wonder how my TD712z would have sounded with the bigger TD725SW Mk2 subwoofer sat between them… It’s probably best I don’t think about that too much, eh?

On the slight downside, you’ll find the TD510 Mk2 require a fair amount of driving. You’ll rarely have turned your amp’s volume knob as far as you will with these hooked up. They’re also quite directional, so you’ll need to be fairly careful with where the drivers are pointing, and try not to stray too far from the sweet spot. 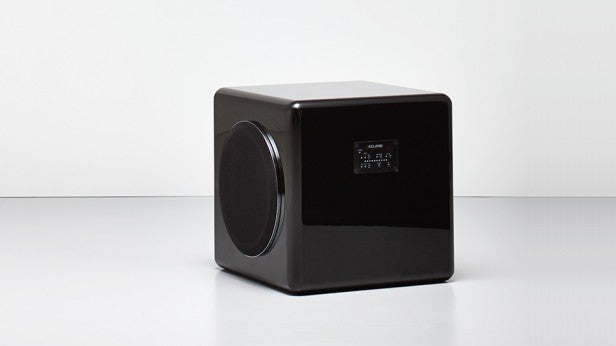 This system won’t be for everyone. I mean, beyond all those people who just can’t afford it. The directionality of the TD510 and general need for breathing space mean that achieving the right setup may be tricky at first. But the results are mind-blowing – and addictive.

Sure, you could opt for more traditional speakers, but you’d be missing out on the Eclipses’ particularly special skills. Get that sub integration just right and you’ll probably never yearn for another set of speakers again. Until you decide maybe the bigger TD712z Mk2 might be worth auditioning after all…

A 2.1 system of the very highest quality, and almost unbeatable in a number of respects.