It’s cute, it’s fun and it’s smart enough to follow your pets around automatically entertaining them with its laser pointer, the Ebo Air is a brilliant little robot in some regards. Yet, for all of its positives, the cluttered interface and poorly-translated notifications let the side down, as does the fact that the robot gets easily trapped on common obstacles, such as cables and rugs. Price is likely to be the main issue and it’s hard to justify spending this much on something that’s for fun only and has little practical application.

Part security camera, part pet toy, the Ebo Air is a fun robot that can automatically keep pets entertained and roam your house so that you can see what’s going on while you’re away.

It has some neat pet-tracking features built-in, in and is rather cute going about its job. The high price and slightly random roaming features make it a hard purchase to justify.

Little bigger than a tennis ball, the Ebo Air is a cute, spherical robot with two tank tracks underneath that let it shift around at some speed (well, provided you don’t have a thick rug, as it will just get stuck).

In the box, there’s a little envelope of feathers that can clip onto the back. As the envelope has a warning about the feathers not being for eating, I decided that I wouldn’t tempt fate with my cats and left them off.

The Ebo Air sits on its little charging dock to top up its internal battery. Once it’s one, I could connect it to my Wi-Fi and use the smartphone app to control it. There are two control modes: manual and automatic.

Manual mode gives you a full-screen view of the front-facing camera, with on-screen sliders to move the Ebo Air around. On Wi-Fi, the robot is very responsive, letting me see exactly where the robot was. I could nip around chair legs and dart across the kitchen floor with ease. Over the internet, there can be a bit of lag, so I recommend taking it a bit easier.

Moving is simple, but the rest of the interface is cluttered with icons. Some make sense, such as the option to record a video or take a photo. These are then saved to the microSD card on the robot.

Other icons, make less sense. There’s radar icon, which turns on the laser pointer causing the robot to say “pew pew”, and a target icon, which gets the robot to track and follow a pet automatically. There are also some crazy automatic modes, such as spinning in a circle or rearing up.

They’re fun to use, with the robot babbling and making noises in a cute voice, but the icons make no sense: what is an emoji of a face spewing rainbow vomit for? I gave up trying to make sense of it and tapped the buttons at random when playing with my cats.

If you don’t want to manually move the robot around, then there are two options. First, there’s a play mode. In this mode, the Ebo Air will leave its dock, move around hunting for pets and then ‘play’ with them automatically. Of course, your pet has to be visible and in the mood for playing for this to be any use.

If that’s the case, then the Ebo Air does a surprisingly good job of keeping your pet in focus. It will even take some video and photos of the interaction, so you can see what your robot and pet got up to when you were out.

Secondly, the Ebo Air can also be sent on a patrol of your house, reporting back on the number of people and pets that it spotted. There are some very strange, badly translated messages as a result: “infested pet has been found during cruise” being the highlight.

Not that the Ebo Air is particularly useful as a security camera: its low-down camera meant that I could see a lot of the floor, but not a lot else. I ignored the roaming option but I did find a use for a manual cruise.

While I was away, I had a notification that my alarm had gone off, triggered by the back door sensor. I got the Ebo Air into action and found the alarm sensor was on the floor: the heat had made the sticky pad come loose.

There’s two-way talk built into the app, with the Ebo Air having a microphone on top. It’s a feature that works as advertised, but I didn’t find it particularly useful, particularly with pets: I try not to talk to my cats when I’m not there, as I don’t want to confuse them.

For the most part, the Ebo Air does a good job of wandering around. It largely avoids any issues, and is small enough to get under furniture and around chair legs: the kinds of obstacle that robot vacuum cleaners often have issues with.

As it’s ball-shaped, the Ebo Air can mostly roll back onto its wheels if it falls over or, more likely, a cat takes a swipe at it. I say mostly, as I did have a few issues with the robot.

Hitting my chair legs at just the wrong angle, or bouncing into the lip of the door, the Ebo Air would rear up into the air, resting on its back with the wheels off the ground. At this point, with no wheels on the ground, the Air can’t move until it’s knocked free.

It also struggles with wires, thick rugs and even pet blankets, and you’ll get a notification telling you that the Ebo Air is stuck and needs rescuing. Tidying up before you let the robot loose is essential.

I’ve got four cats to test the Ebo Air with. Out of all of them, Behemoth is the keenest and loved the laser point. He’d chase it around, pouncing on it and wasn’t bothered by the robot itself. At no point did he decide that the robot should be the focus of his attention, and left it well enough alone.

If you want a funky way of keeping pets entertained automatically, the Ebo Air is a smart and capable robot.

A laser pen is cheaper for manual interaction and a security camera better for home monitoring: this is a product that’s hard to justify buying.

There’s nothing else quite like this product and the closest thing I’ve reviewed is the Petcub Bites 2, an automated treat dispenser with camera. The Ebo Air is far more interactive, actively playing with your cats (or letting you take manual control).

It’s a clever product, automatically scanning and finding pets, although how much my cats wanted to be entertained is up for debate. I found that the robot mostly navigated well, although it did get stuck a few times.

Taking manual control is useful for seeing what’s going on while away, and for playing with pets. The cluttered interface needs some work, as it can be hard to understand what each button does. The bigger issue is price: it’s a fun toy, but spening this much money on something that’s a bit of fun could be hard to justify.

Unlike other sites, we test every smart home product we review thoroughly over an extended period of time. We use industry standard tests to compare features properly. We’ll always tell you what we find. We never, ever, accept money to review a product.

We test how each product integrates with other smart home systems including Amazon Alexa, Google Assistant, Apple HomeKit, IFTTT and Samsung SmartThings

We use each smart home product in a real world setting, integrating it into our home. 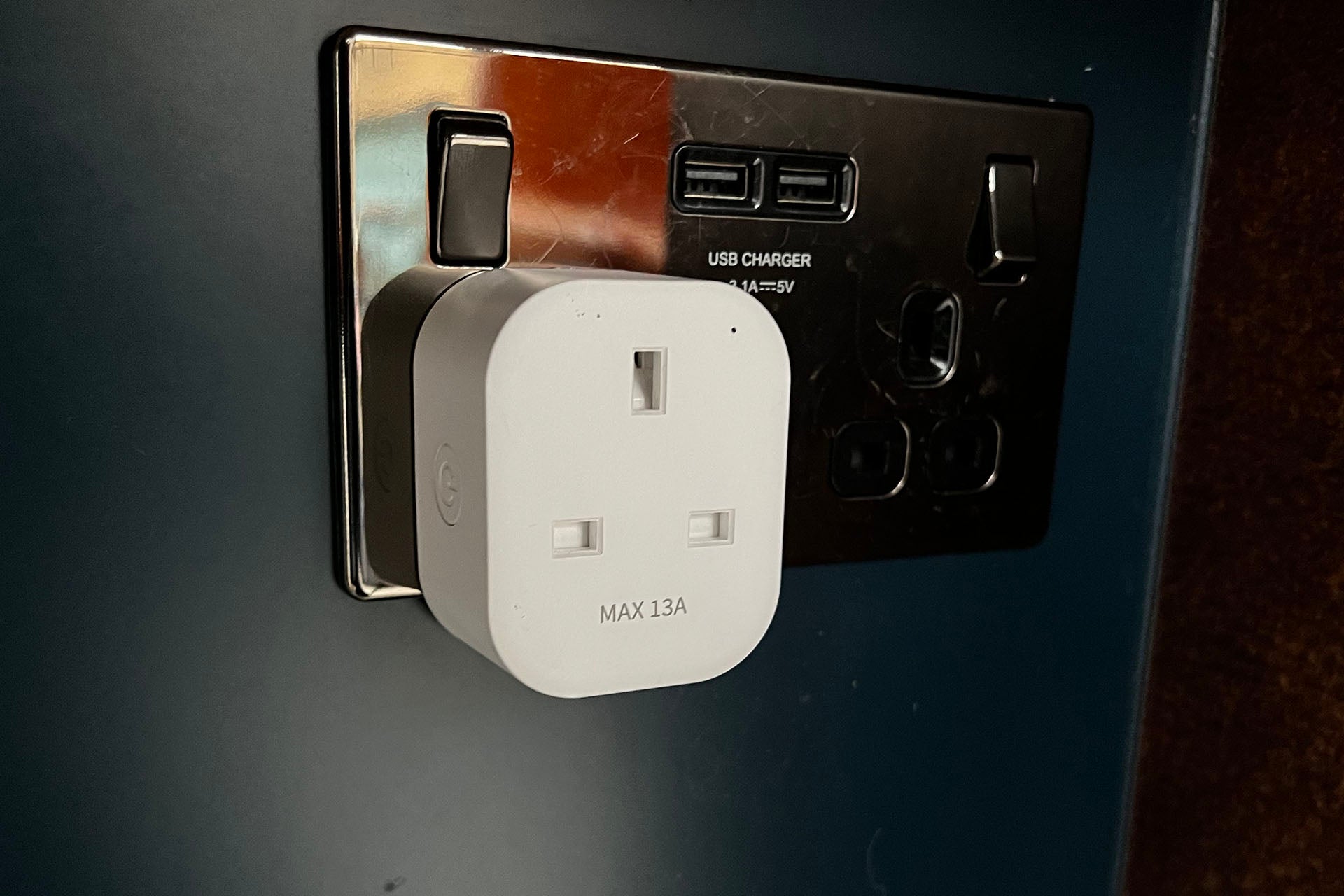 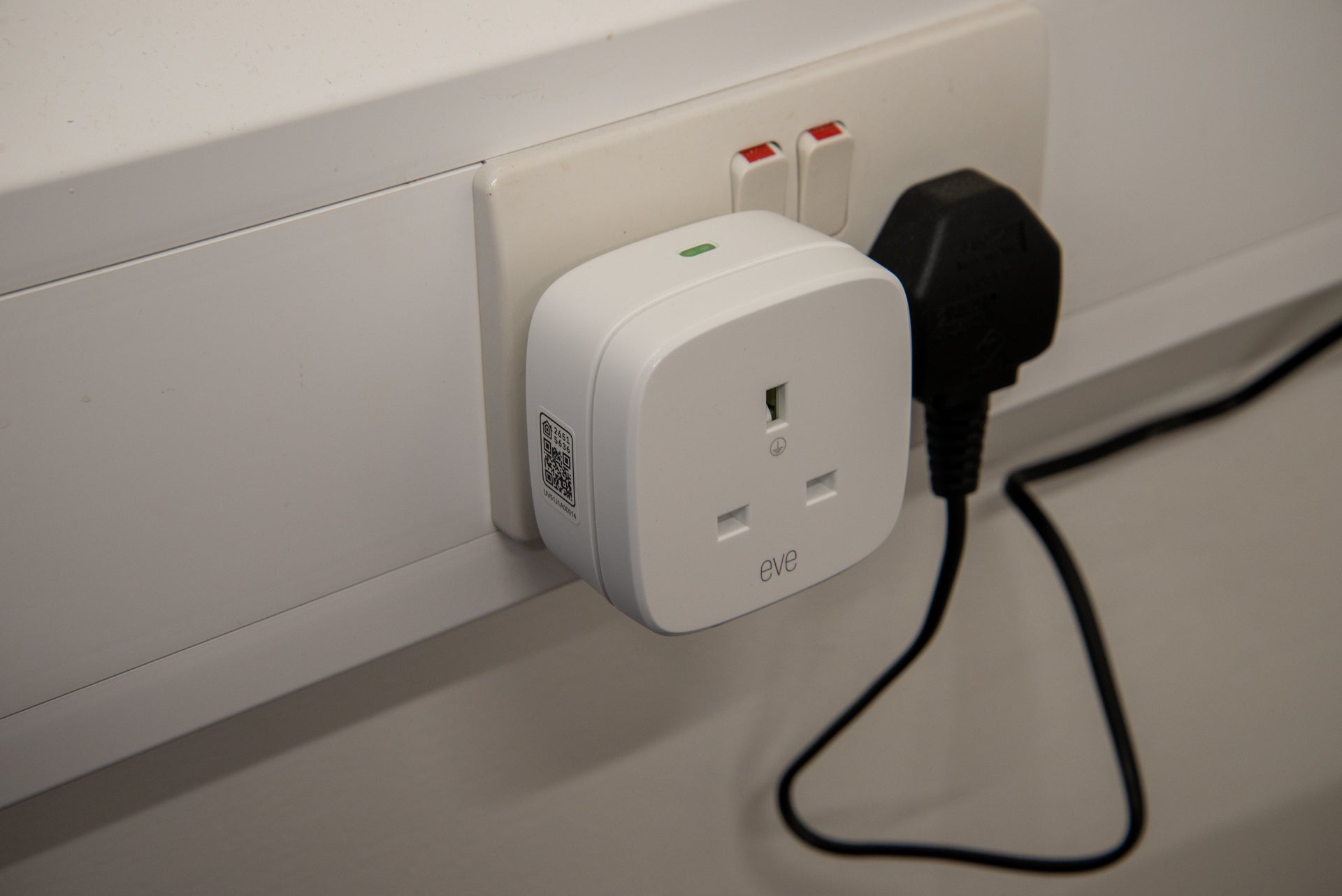 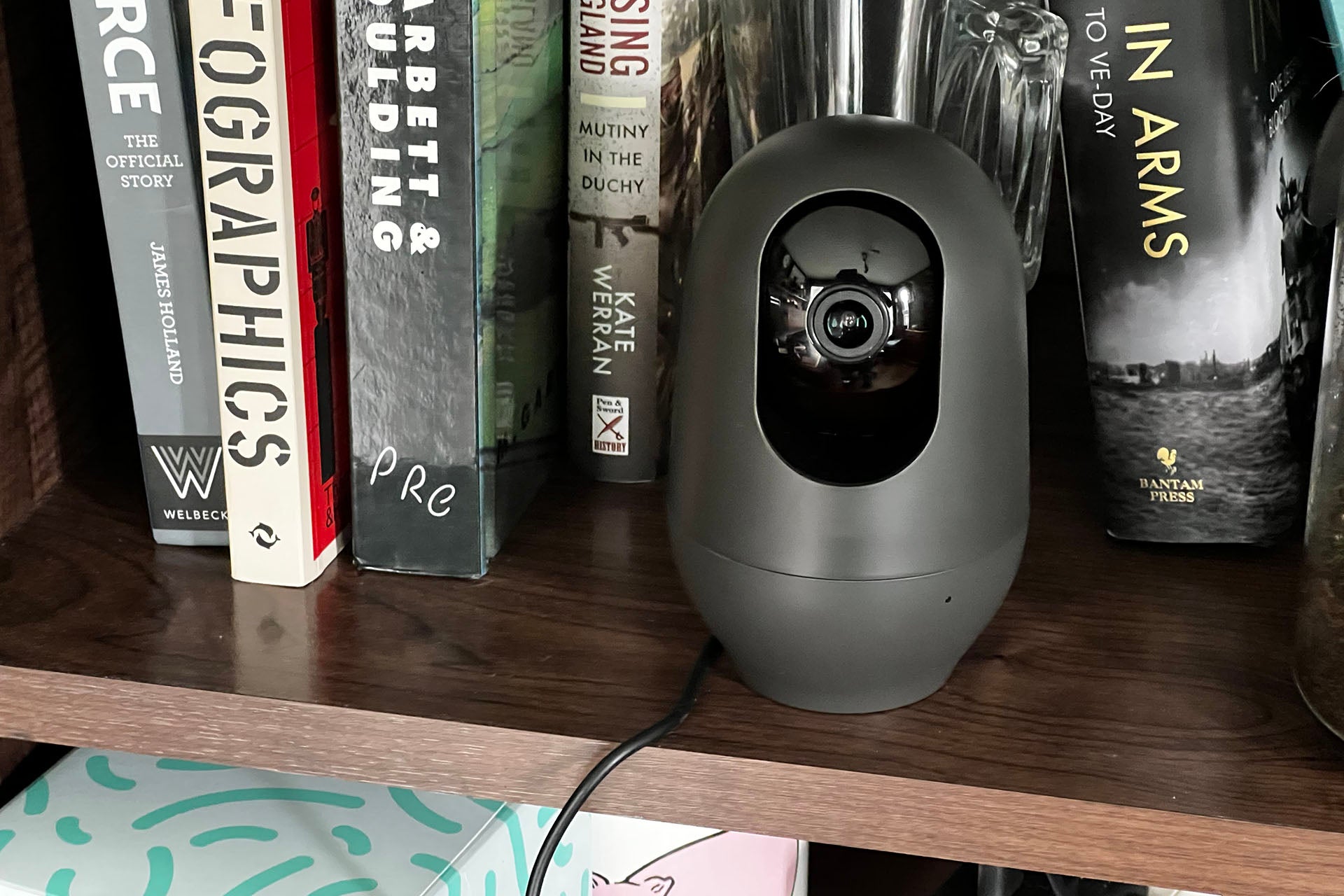 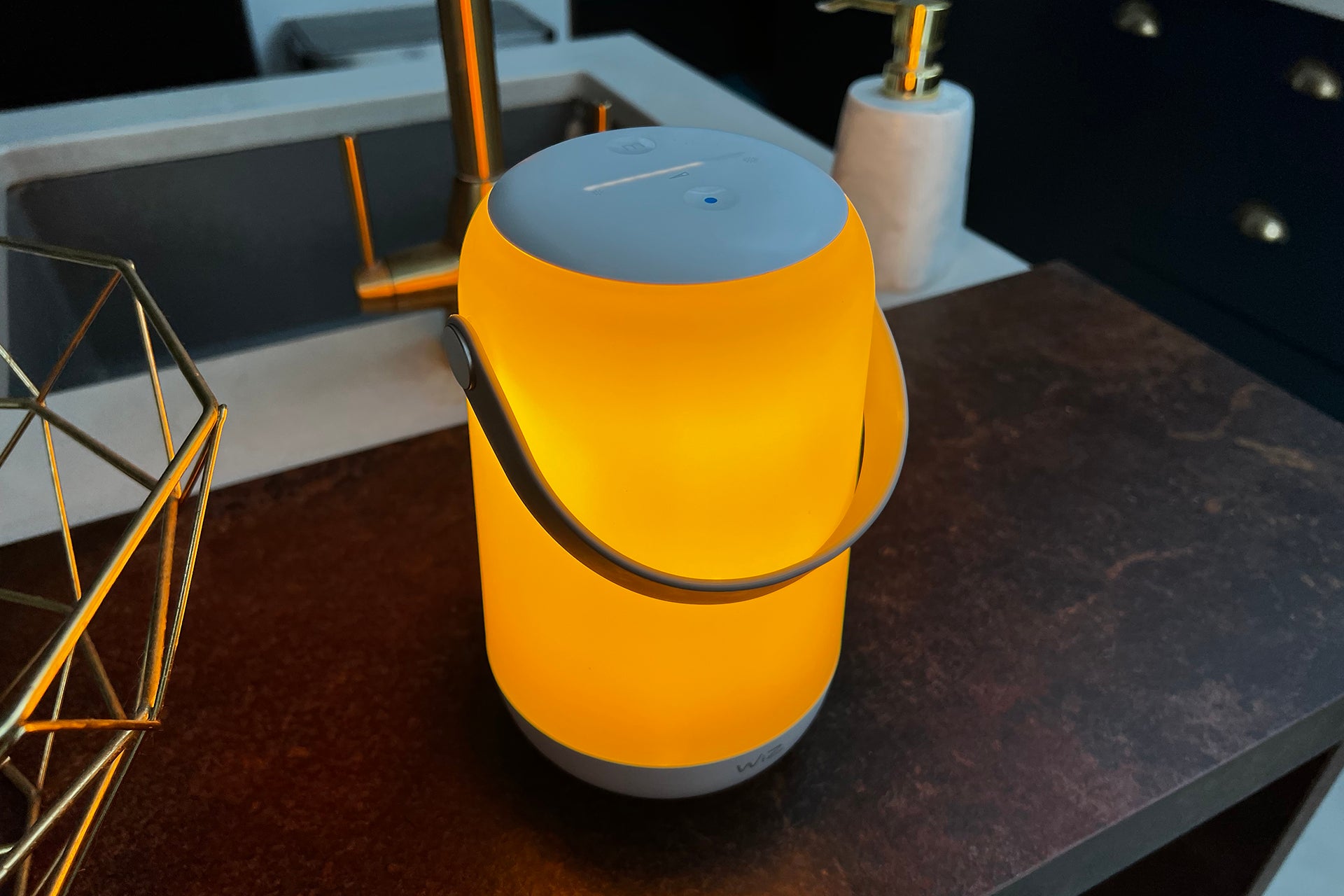 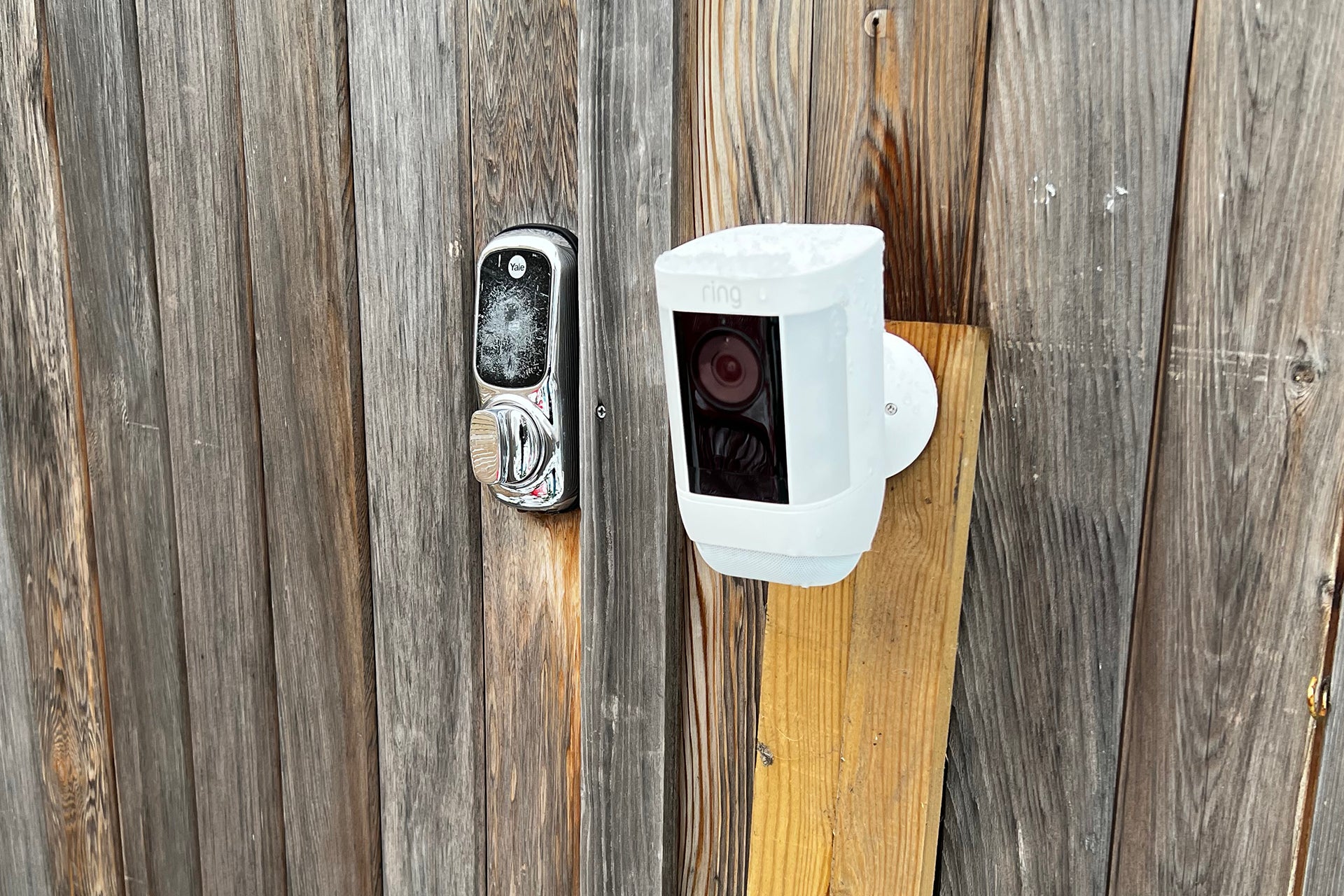 How can the Ebo Air interact with pets?

It can be set to find and track pets, playing with them automatically.

What security features does the Ebo Air have?

It can go on a patrol automatically, letting you know if people or animals are spotted.