I’ll admit it: I came in rooting for Earthfall. Sure, it’s Left 4 Dead with aliens, but who’s complaining when Left 4 Dead 2 is now nearly nine years old and neither Valve nor Turtle Rock seem to have any plans for a sequel. And you can see this is a passion project for a small team, working with a minimal budget and minimal assets. In that conext, Earthfall is an impressive achievement.

But it’s also a game beset with problems. At the time of writing, the Xbox One version doesn’t have functional matchmaking – surely one of the core requirements of an online co-op game. The PS4 version has had its European release pushed back a week. Beyond this, there are issues with the AI, the pacing, the basic game design and long-term appeal. Most of all, Earthfall comes away feeling like an inferior version of a ten-year-old game, missing the style, suspense and artistry of the Valve/Turtle Rock original.

In some ways, Left 4 Dead had it easier. Everyone’s seen a zombie apocalypse TV series or movie, and Left 4 Dead was clever in the way it played with the clichés, paid homage to zombie movie archetypes and introduced fearsome new threats. Who can forget the Hunter or that goddamn terrifying Witch. Earthfall has a whole alien invasion to contend with, and it doesn’t do that fantastic a job of explaining what has happened, why it’s happened, who your heroes are or why they have to stop it, though snippets of background lore are there to be unlocked throughout the two five-level campaigns. 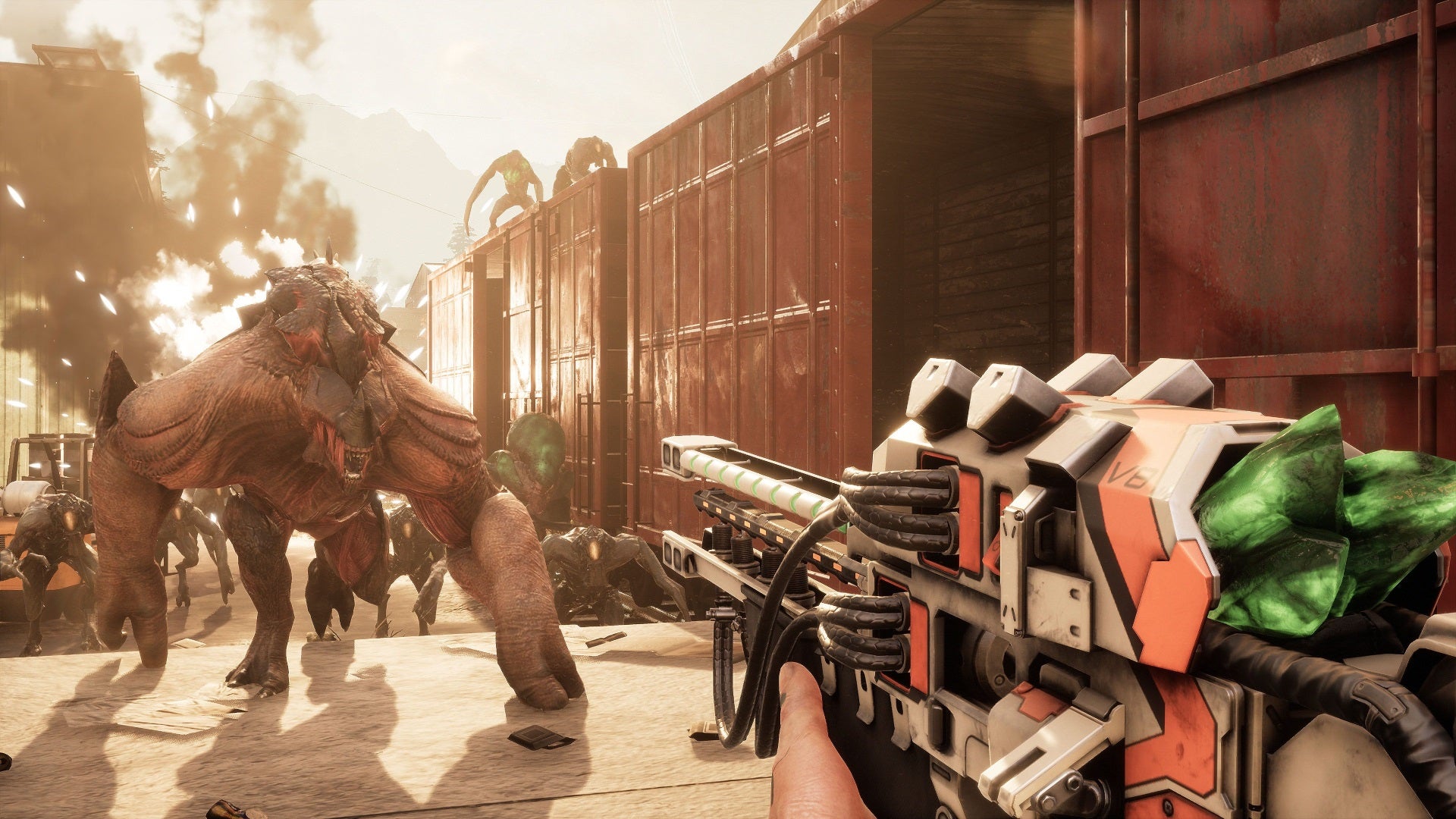 The aliens themselves aren’t bad at all, even if they draw a little too much on existing templates. You’ve got your standard shambling, clawing grunts plus variations on Left 4 Dead’s Boomer, Spitter and Tank (i.e the exploding one, the long-range, acid-spitting menace and the really big, hard bugger who takes ages to bring down). However, Earthfall also has some nasty, aggressive dog-like critters, some weird, pulsating eyeball things that get the other aliens riled up, and a nasty, shield-protected fiend with teleportation powers and a vicious charge move. When they’re all coming at you en-masse, it makes for some intense and demanding firefights.

There’s not much wrong with the core combat, either. You start with a pistol but can pack your two slots with any assault rifle, SMG, shotgun or hand cannon you find along the way, not to mention melee weapons like machetes or an axe. A few more futuristic weapons are thrown in later on, while heavy weapons like mini-guns and flamethrowers can be grabbed and used until their ammo runs dry. At certain points you can also 3D print one of a choice of weapons; this invariably summons a horde of monsters, but the pay-off will be worth it, right?

Aiming feels solid and the different arms pack a punch, while you can pick up porta-barricades and turrets to help you fight off incoming hordes (though you’re unable to wield a gun while lugging them around). Landmines and napalm grenades are always fun to muck around with. When high explosives meet a horde of monsters, what’s not to love? 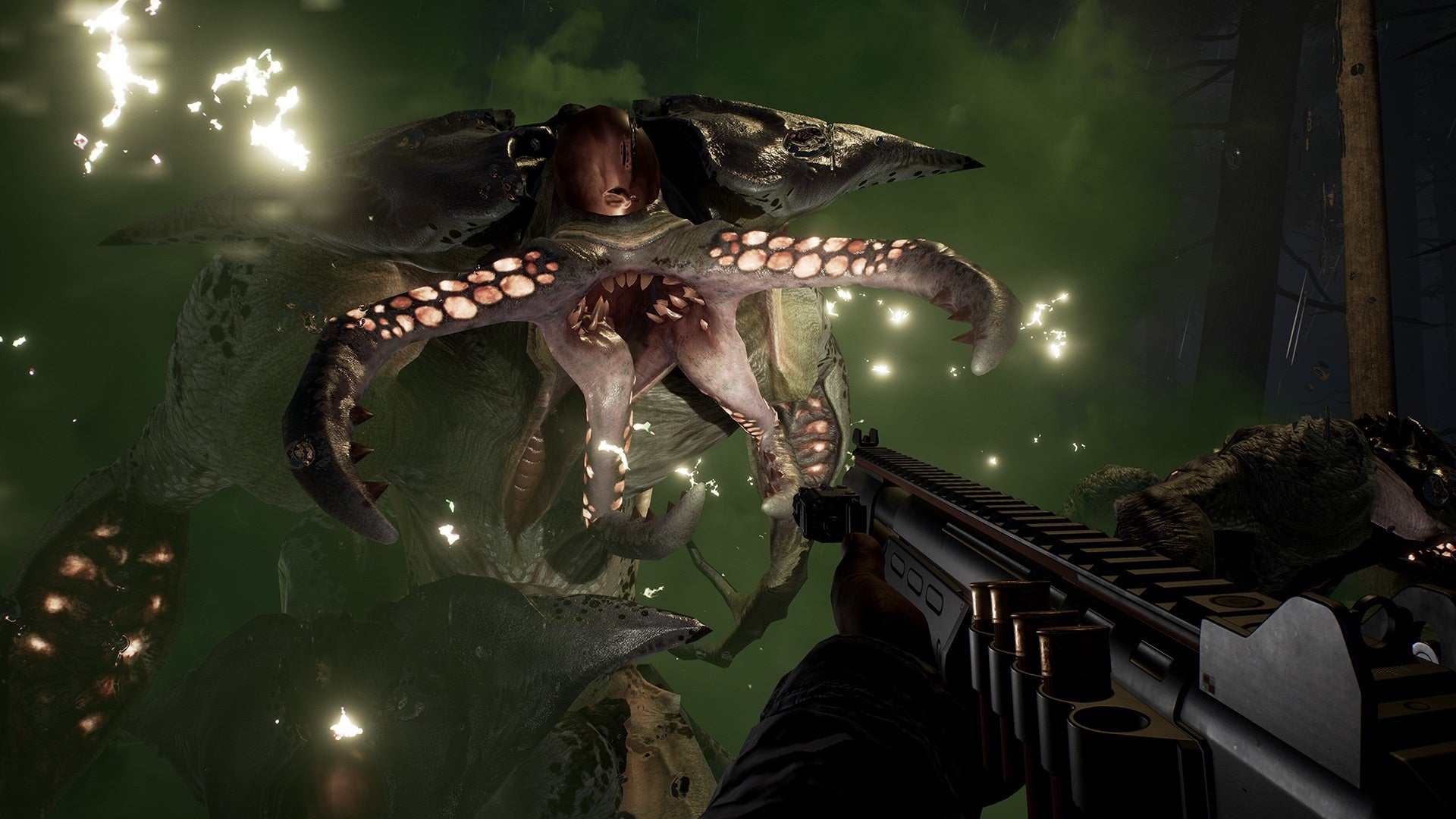 As far as the visuals go, you can see signs of the budget in the low-detail scenery and sometimes clumsy animation, but use of the Unreal 4.0 engine stops the game looking dated, while the monster designs and sci-fi effects hold up well. Earthfall doesn’t immediately look like a low-budget indie shooter.

In fact, at its best it looks and feels like a Left 4 Dead expansion, the game’s internal AI director throwing aliens at you whenever the pace starts falling flat, with the best set-pieces delivering the same mix of competition (to see who can kill most), cooperation (helping your buddies when they’re down) and nervous panic (how the hell do they expect us to survive this?).

Yet the level design tends to be drab, pedestrian and predictable. It’s a game full of pretty but generic forest settings and dull industrial complexes, where you’re always looking for a sneaky way in to a vital area, or for the button or device you have to interact with before you’ll be allowed to move on to the next section. And guess what? Pressing that button or interacting with that device will invariably call in a new horde of monsters, appearing as if from nowhere (and sometimes visibly so). 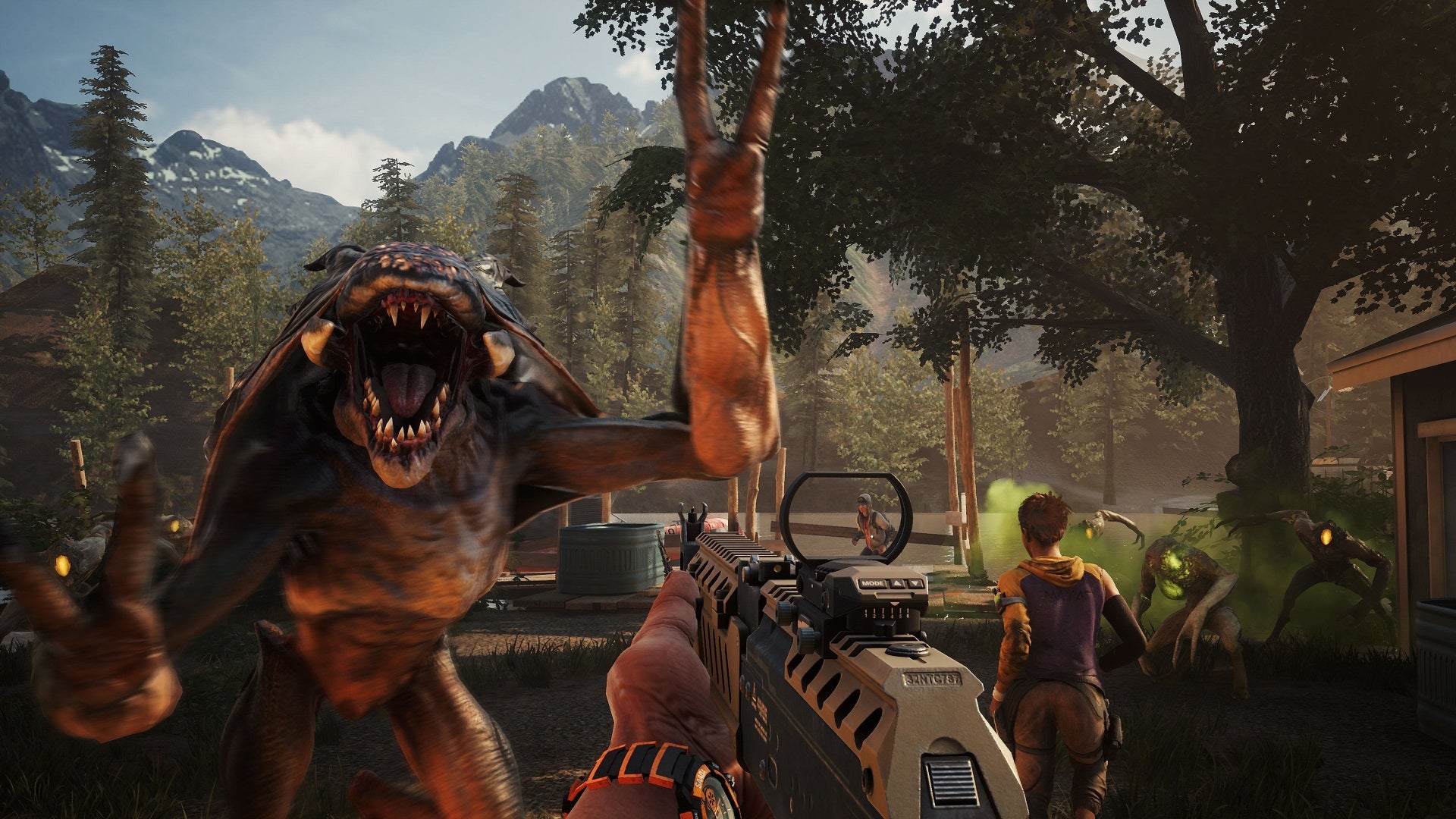 There are sections that stick in the memory – fighting around a snow-covered town, battles through an alien-infested trainyard with a great climactic set-piece near the end – but a lot of the action becomes very routine, very quickly. And when it’s not simply uninspired, it can be actively aggravating; the director has a horrible tendency to throw in one or more of the hulking Beast aliens right at the end of a chapter, just in time to wipe your whole party out seconds before the mission ends.

This wouldn’t be such a problem, but Earthfall isn’t as astute as Left 4 Dead in how it handles death and respawns. Lose enough health and you collapse to the floor, where you can still provide support with your pistol until revived. Lose all your health, and you leave the game temporarily, though you can still be revived (it just takes longer). There are no safe rooms where survivors can respawn and no survivor closets where they’ll reappear spontaneously. If three-quarters of your four-strong squad goes down in the middle of a swarm, you’ve pretty much had it. You’re looking at restarting the whole level.

This is a particular problem if you’re reliant on AI bots to fill out your party (a dead cert given the current matchmaking issues). They’re terrible at using healing packs and, while better at reviving, no good at playing for survival when the rest of the team is down. If you’re even thinking of playing Earthfall solo, I really wouldn’t recommend it. If it’s not actually boring you, it’s busy wearing your patience thin. 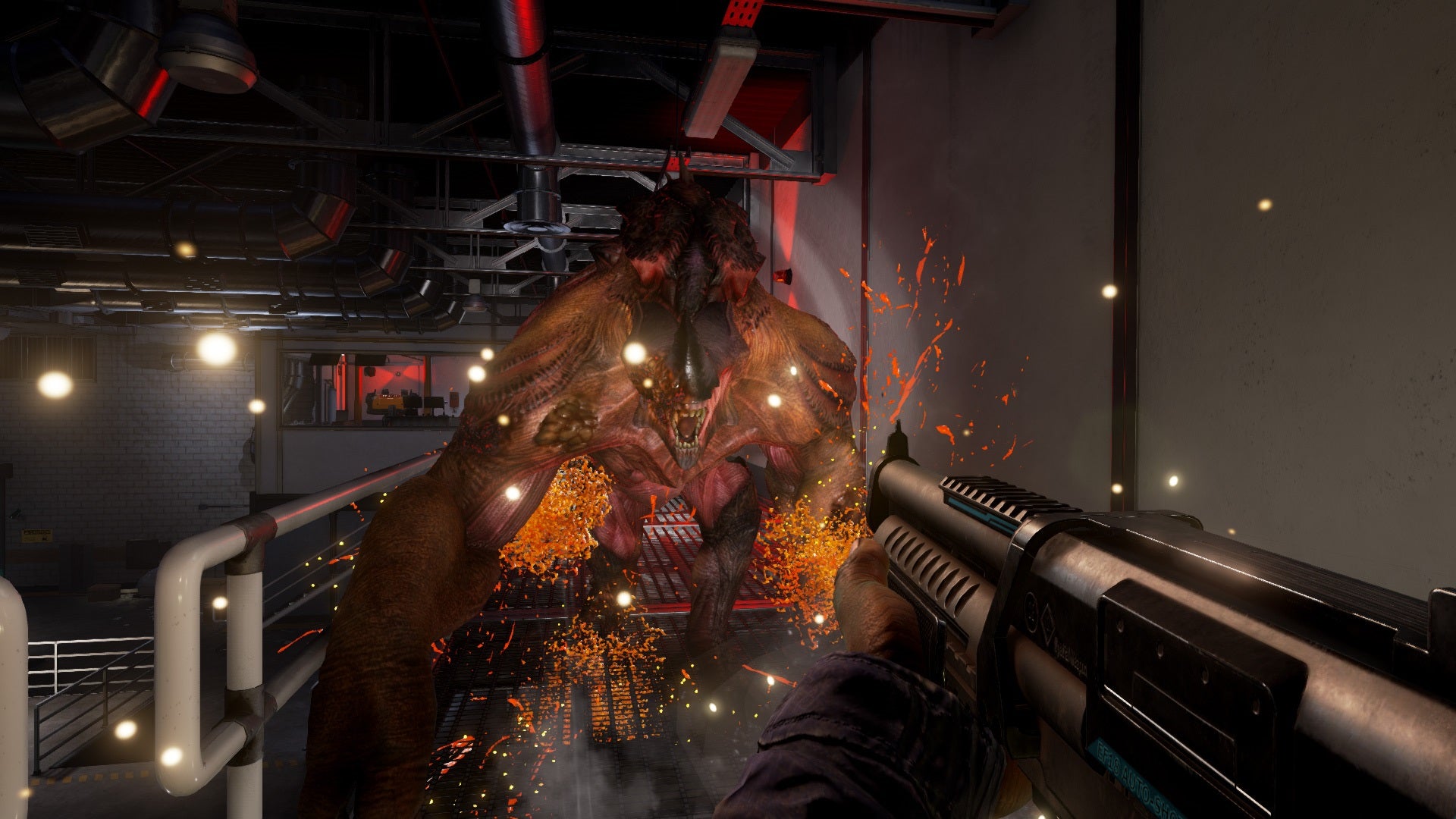 I’ve been playing online with a friend, and there it’s a big improvement. Earthfall is good enough to create the sense of camaraderie and friendly competition that’s part of any decent co-op game. There’s fun to be had in working with your buddies, fighting off the hordes, occasionally bringing down an unwanted alien apocalypse or doing something disastrous with napalm and exploding gas canisters. It works in the way Left 4 Dead worked all those years ago.

And yet, you can’t help feeling that there are a lot of other games that do the same kind of fun, but better. After all, co-op shooters aren’t exactly as rare as they were in Left 4 Dead’s day. Mainstream shooters like Gears of War 4, Ghost Recon: Wildlands, Far Cry 5 or Halo 5 allow you to storm through the whole campaign in co-op. Online shooters like Destiny 2 and The Division are designed explicitly with co-op play in mind.

Play Call of Duty? Just crack into Zombies mode. And meanwhile, smaller titles like Warhammer: Vermintide 2 or Killing Floor 2 have found ways to evolve the Left 4 Dead template in more interesting and satisfying ways. Earthfall doesn’t reach the same high standard, leaving it feeling as dated – if not more so – than it’s decade-old inspiration.

There’s space out there for more games in the Left 4 Dead mould, and Earthfall tries its best with limited assets and a limited budget. Sadly, it lacks the things that could have made up for both: imagination, invention, thrilling pacing, suspense and brilliant level design. Even without the current – and frankly unforgivable – matchmaking problems, it’s a game that struggles to match the ten-year-old classic it’s cloning, let alone surpass it.