Can these small true wireless in-ears from Earin challenge the likes of Apple and Sony?

Go back a few decades and headphones were often flimsy-looking with fuzzy earpads or big, chunky cans that clamped onto your ears. Suffice to say, headphone technology has come on a long way since.

This is no more evident than with the Earin M-2. These earphones are incredibly small, lightweight and packed full of technology – an ambitious pair of true wireless in-ears that aspire to challenge Apple’s AirPods. The question is, are they the real deal? 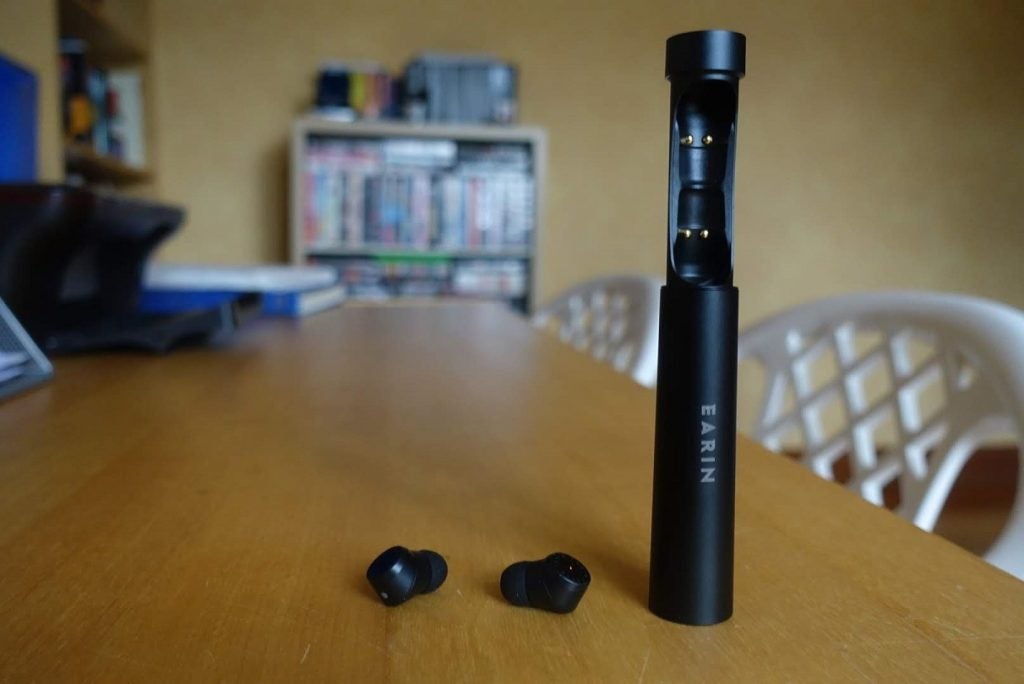 Upon first catching sight of the Earin M-2s, you can’t help but be impressed by their minuscule size. Roll them around in the palm of your hand and they could easily escape your grasp, so take care upon removing them from the case.

Speaking of the charging case, the M-2 eschews the usual style for something that bears more of a resemblance to a tube of Smarties. Lift the top edge and you can liberate the earbuds from the magnetised attachment. Also at the top end of the capsule is a micro-USB cable connection for charging – our review sample didn’t come with one, but any cable will do.

Amusingly, the M-2 capsule looks like the Neuralyzer gadget from Men in Black when extended. Sadly, it won’t be possible to use this to erase Brexit from your memory.

Build quality is slick. The M-2s sport a premium look and are robust enough to withstand a few drops from a decent height.

They feel good in the hand, too, the combination of glossy and matte-black surfaces allowing for a grippy texture whilst facilitating decent feedback from the touch panels. At the centre is an indicator light that’s solid when charged or flashes when charging.

We’d recommend using your thumb and index finger for inserting the earbuds, to avoid inadvertently pressing the touchpad and bringing up Siri (or your voice assistant of choice). The M-2s come with several tips for fitting, although we found the original worked well enough.

In light of their size, you’ll need to move the earbuds around and angle them in to get the tightest and best fit. 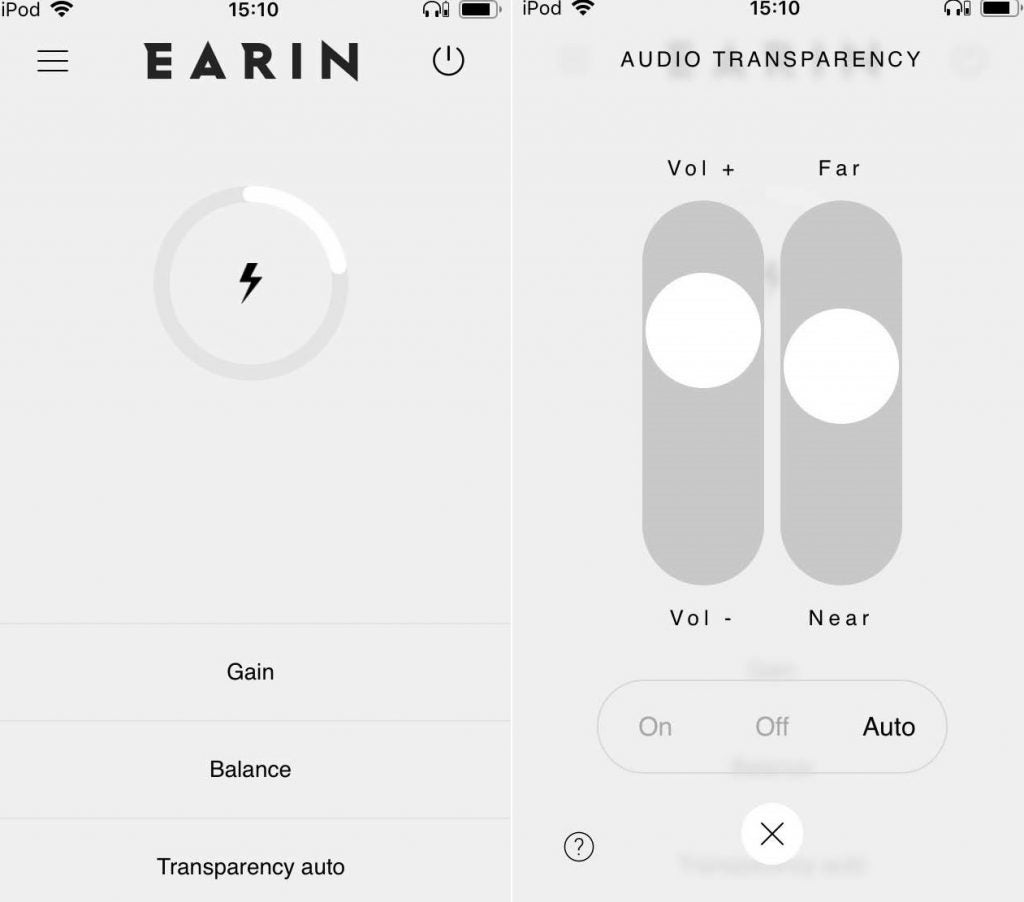 It’s also worth getting the M-2 app from the Apple App and Google Play stores before you start. Once the earbuds are paired with the app, you can download updates, customise Gain and Balance levels, and also fiddle with the Audio Transparency setting.

Pairing them to our iPod Touch for the first time was fairly painless. Subsequent use has proved the M-2s can be fidgety in this regard.

Each bud is paired independently, with the first acting as master and the other as slave. More often than we’d like, pairing the second bud would result in disconnecting the first, which would then require another attempt. In some cases both were paired, but only one appeared as connected.

Pairing isn’t always the fast, seamless operation you’d like. Annoying, yes, but it would eventually work after a few tries. Problems weren’t frequent enough to get on our bad side, but your mileage and experience may vary. 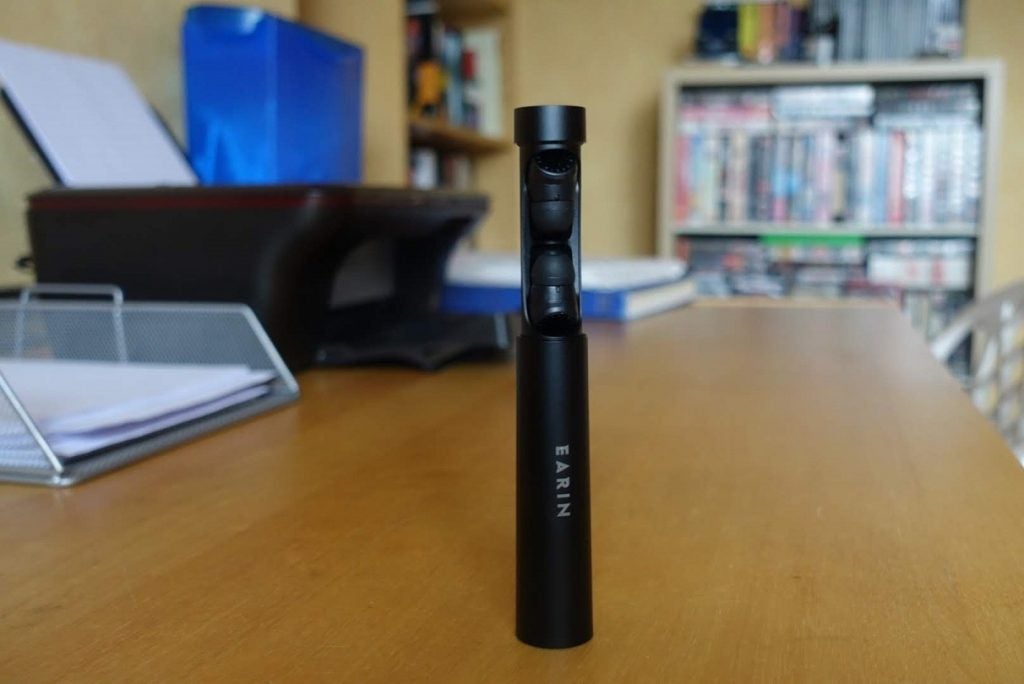 For those who are more technically inclined, adjustment of Gain and Balance settings is available through the app. You can also change the transparency of the audio: move the slider up or down in the app, and you can hear sounds close or far away.

The feature is useful for being able to engage in conversation or hearing ambient noise without interrupting your music. It does mean you’ll need to open the app to adjust the levels, but that’s a fair compromise. Some noises did come across as having a processed sound to them, and note that regularly tweaking the EQ settings appears to affect battery life too.

Earin claims up to four hours for continuous usage (14 hours with the capsule). It’s less than the five hours of the Apple AirPods, but better than the Sony WF-1000X‘s three hours, which does come with ANC to muddy the comparison.

We found playback averaged 3.5 hours, and dropped further when adjusting the EQ settings – resulting in the need for a second charge to see out the day. If you’re a heavy user then you’d be wise to keep the capsule close by.

In terms of operation, a single tap of the touch panel starts or stops playback; a long tap activates a voice assistant; two quick taps skips to the next track and three returns to the previous track. At first we skipped forward as often as we jumped back, but as long as you’re precise and fairly quick with your taps, the touch panel is responsive. Standing still, rather than doing it on the move, aids accuracy too.

One neat feature is that you can stop playback by taking the master earbud out of your ear, holding it away from your head. Pop it back in and playback starts again. It’s a nice touch, although this did result in the earbuds switching to mono sound instead of stereo on one occasion. 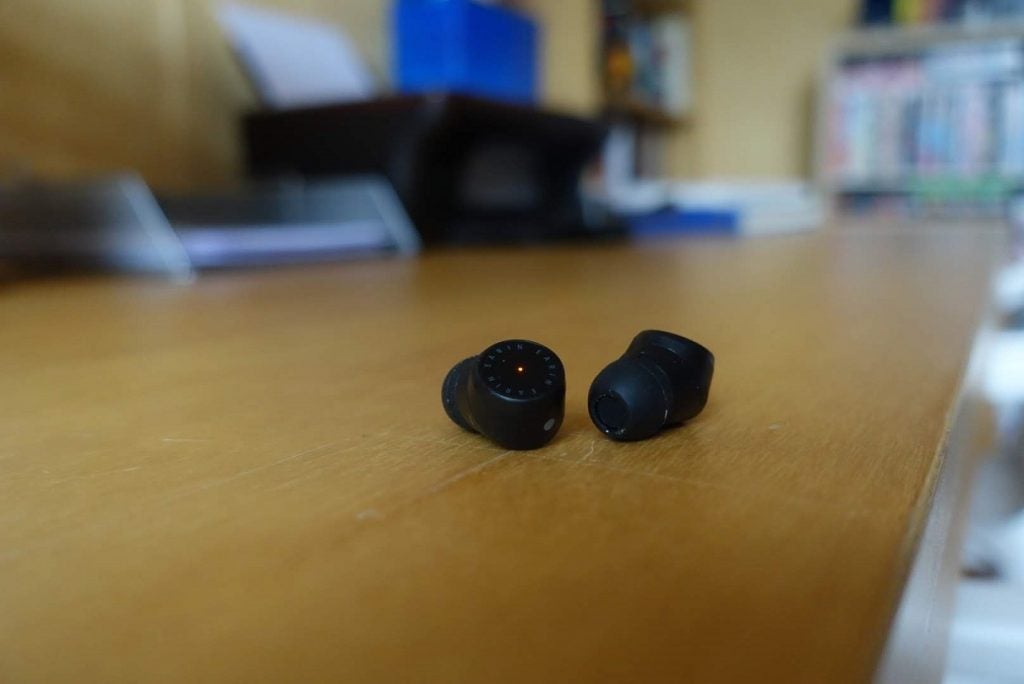 The Earin M-2s are smooth and refined performers. Play Alicia Keys’ So Simple and there’s enough bass to feel its presence – but, not surprisingly for their size, the M-2s often feel underpowered.

There’s a good degree of space and detail, though. The sense of dynamics in Crash Decisions from Michael Giacchino’s Star Trek Beyond soundtrack allows the M-2s to get behind and propel the song in a rousing manner.

The M-2s lack punch and heft, though. Detach from Interstellar dwindles when it ought to soar.

At other times the earbuds display an impressive sense of breadth and scale , the soundstage bigger than you may expect, with a fine sense of stereo imaging thrown into the mix.

There’s a clarity to the mid-range that’s expressive, particularly when listening to Chris Cornell’s voice in Audioslave’s What you Are. Play a track such as What Planet is This? by Yoko Kanno & The Seatbelts and the song explodes with verve, the M-2s keeping up with the energy of track without losing a sense of composure.

The M-2s needs good recordings to shine, though. Poor or muddy recordings sound lifeless and drab.

Connectivity-wise, we did experience a few drop-outs. The M-2s use Bluetooth 4.2, which isn’t the latest version of Bluetooth. Walking through a busy train station always provoked an unstable connection as did – for some reason – walking outside The Old Vic theatre. Complete disconnections were infrequent, but did happen when the charge was low. 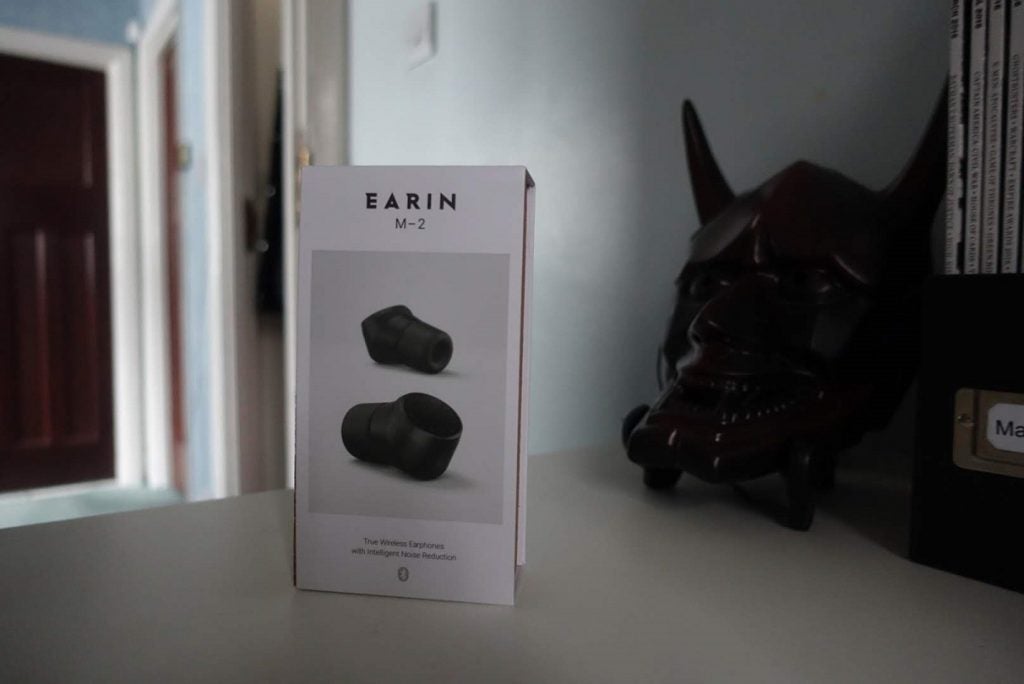 If you’re in the market for true wireless in-ears then the M-2s are worth an audition. They produce an inviting sound and apply themselves well to a number of genres.

Priced at £219, they cost more than the Apple AirPods and Sony’s WF-1000X, which is still one of the better true wireless in-ears. Nevertheless, the features are clever and useful, especially if you like tweaking the sound to your liking. And their minimalist design is pleasing, even if they’ll be buried in your ear most of the time.

Great sound from a tiny true wireless in-ear, but the M-2s aren’t without a few issues.