No matter how far we move into the digital age, we just can’t seem to get rid of the good old pen. From graphics tablets to stylus interfaces to handwriting recognition, the tool that’s mightier than the sword sticks with us tenaciously. Today we’re taking a look at a peripheral that combines the best of both worlds: e-Pens’ Mobile Notes, a digital pen with ink that can write on normal paper too.


You might think Logitech got there first in 2003 with its now-discontinued io Digital Pen, which also wrote to real paper at the same time as interpreting a digital copy, but the two technologies are fundamentally different. For the end user, the difference that matters is that Logitech’s pen required special ‘digital paper’ (real paper, but with an invisible dot pattern imprinted on it), while e-Pens’ device works with any old scrap – or indeed, any writable surface at all. In addition, it can also function as a wireless mouse.


E-Pens’ secret lies in the small sensor you must put on the top of any page or area you intend to write, doodle or draw on. The company offers two different digital pens. The e-Pens Create is, as the name suggests, aimed at designer and artist types, and comes with a wired sensor and a bundled copy of Serif Draw Plus. The more expensive and work-oriented e-Pens Mobile Notes under review today, on the other hand, comes with a wireless sensor with its own built-in rechargeable battery and bundles Vision Objects’ MyScript Notes for handwriting recognition and conversion.

Before you can get started, you first need to pop in two V392 cell batteries at the top of the pen, insert either the plastic stylus or metal biro pen nib at the tip, and charge the sensor for around three hours using the supplied USB cable – all of which is covered not only in the colour quick-start guide, but also in a handy if rather hand-leading tutorial-video e-Pens provides online.


Then it’s time to install the software, which requires Internet Explorer to be your default browser for an automatic install. Naturally, users of other browsers can just do it manually, so it’s not a big issue. Minimum specifications for e-Pens Mobile Notes include Windows 2000, XP or Vista, so as is frequently the case Linux and Mac users need not apply.

Aesthetically the pen itself looks decent enough and it’s comfortable to use, though a rubberised grip wouldn’t have gone amiss. There’s a metal clip for fastening and the cap fits snugly on the pen’s top, so there is no fear of losing it while the pen is in use.


Like the pen, the sensor-housing is quite sturdy. It has a monochrome 1.3in wide LCD screen and a single multi-function control button. When in use the display shows pen activity, how many ‘notes’ you have stored in the device’s internal memory (more on this later) and a three-bar presentation of battery life, while the single button stores notes and turns the device on or off with a three-second press.

Thanks to the sensor’s rechargeable battery and its compatibility with any kind of paper or flat surface, you can use the Mobile Notes pen pretty much anywhere. Portability is not a problem since the sensor is just under 7cm wide and 3cm across, so is perfectly pocketable. To prevent the battery running down, the sensor switches itself off after a period of inactivity.


E-Pens has provided a bulky case for carrying the set around and though it’s better than nothing it is not very impressive. It is made from cardboard with a magnetic clasp, while foam cut-out internals protect the pen and sensor. Aside from the case’s large size, the major annoyance is that it doesn’t provide any cut-outs for spare pen batteries or, more importantly, for the spare nib. Depending on usage you might want the stylus or biro nib installed and it is all too easy to loose the nib you aren’t using – as we found found out firsthand! 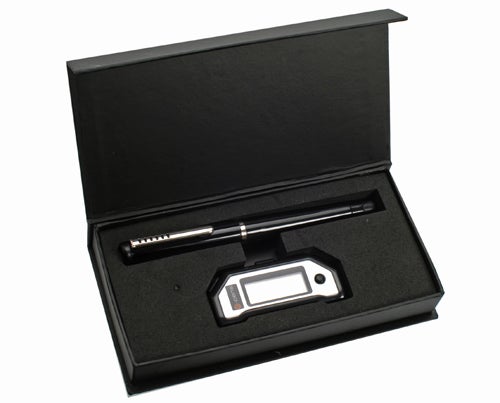 At least switching nibs is made as easy as pie by the nib-extractor e-Pens has cleverly built into the pen’s cap. Merely turn the cap backwards, push it onto the nib and the latter should come away smoothly. The only downside is that with each extraction nibs do get damaged slightly, but then they aren’t meant to last forever and are easily replaced.


So what is e-Pens’ digital pen actually like to use? For anyone who’s worked with styli from various graphics tablets this ambidextrous pen feels much the same, down to the small rocker switch on the bottom section. It’s heavier than a normal pen of course, and the e-Pens’ broad base extends quite far down, leaving only 3mm of the nib visible. This is usually not an issue, but can lead to problems if you write holding your pen at a pronounced angle. 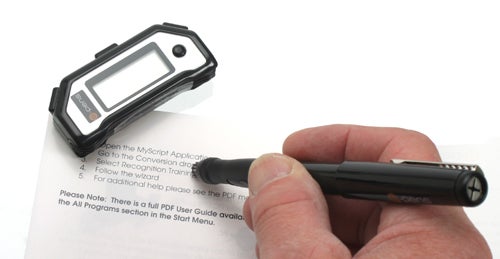 Range for the device is excellent: the sensor comfortably covers an A4 page, and as long as you don’t block it and keep fairly even pressure on the pen it will pick up everything – technically impressive, to say the least. The LCD will always show whether it’s receiving a signal by displaying a pen icon.


When you are done writing or drawing in Mobile Mode (i.e. using the combo on battery), simply save your notes or drawings with a press of the function button. The sensor’s memory can hold about 50 A4 pages and its LCD will always show how many you’ve stored so far. Annoyingly, there’s no way to not save scribbles once you start (since even if you turn the device off it will still save your most recent pen session), but at least you’ll never delete something by accident.

Transferring data from the sensor to your PC is very simple. Just connect it using the provided cable through the sensor’s mini-USB connector, open Note Manager, and press the upload button. You can then choose to view, save, send or edit the pen session, or you can choose to convert it to text using Vision Objects’ multilingual MyScript Notes.


Interestingly, MyScript Notes is a newer version of the same third-party intelligent character recognition (ICR) software that came bundled with Logitech’s io Pen back in the day, and it’s easy to see why since it does an excellent job. As long as you write in a straight line (lined paper is recommended) and with a modicum of clarity, MyScript Notes picks up most words accurately (check out Page 4 for a sample sequence).


Between a colleague and myself with completely different handwriting styles, Vision Objects’ software managed an accuracy rate of about 90 per cent. Better yet, you can train the software to improve recognition using MyScript Trainer, which sets up a unique profile for each user. 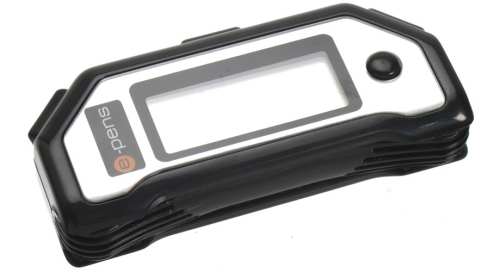 Another nifty feature of the e-Pens Mobile Notes Digital Pen is that it can be used as a mouse when the dongle is connected to a PC – this is called Connected mode. Switching between mouse and pen while Connected can be achieved in several ways, but the simplest is just to tap with the pen close to the sensor’s front, at which the pen icon on the LCD screen will change to a mouse icon.


In mouse mode (where you’ll probably want to use the plastic stylus nib), you hover the pen over a surface to move your pointer, use the rocker switch or tap to left-click, and tap and hold to right-click. It’s a pretty good alternative to a mouse and it will work on any surface (including mirrors) as long as nothing comes between it and the sensor. Heck, you can even use it in the air if you stay within the sensor’s flat plane and use the rocker switch to click.


Of course you can also drag the nib around to draw lines, so this digital pen makes for an interesting alternative to a tablet. Its lack of pressure or tilt sensitivity means it’s not for serious designers and artists, but for anyone who wants to experiment or for those who can’t afford a tablet it might be just the thing. 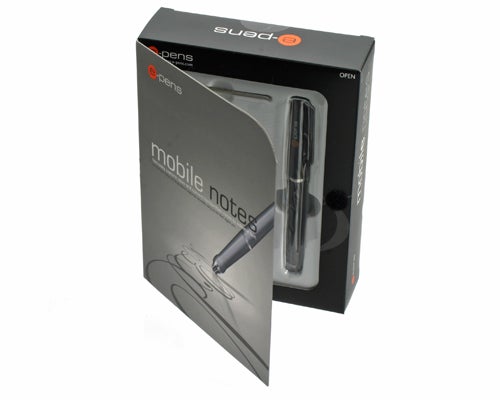 In terms of value for money, the portable e-Pens Mobile Notes Digital Pen doesn’t seem too expensive at £72.44. Though the likes of NEWLink appear to be offering the same hardware for around £40, this doesn’t include a full version of Vision Objects’ MyScript Notes which is worth at least £30 retail.


Technology has moved on since the days when digital pens required ‘digital paper’ and e-Pens’ Mobile Notes Digital Pen is a fine example. It’s not for everyone, but if you still write a lot of handwritten notes or want to doodle without the expense and weight of a tablet, e-Pens’ device is worth considering.

(centre)Here we have a photo of the original text written on lined paper using the digital pen with biro nib.(/centre)

(centre)This digital image is how the e-Pens pen ‘interprets’ what I have written.(/centre)

(centre)And this is the result after Vision Objects MyScript Notes has changed the handwritten sample to computer text.(/centre)