The Dyson Pure Humidify+Cool is powerful and sanitary humidifier, while also purifying the air in your room. The company’s use of independently moving fan barrels in this model has allowed for the introduction of a new Breeze mode, which makes airflow feel more natural. Sure, this model is expensive, but you can use it all year round – and it will prove invaluable for those who suffer allergies and dry skin conditions.

Dyson has been moving away from simply making standard bladeless fans, kitting out all of its latest models with purification at a minimum. The Dyson Pure Humidify+Cool adds an extra feature into the mix: a powerful, automatic humidifier that adds moisture into the air of your home.

Adding a water tank to the bottom of the fan has meant that Dyson has had to get inventive; the fan is too heavy to physically turn. The result is a smart new oscillation system that makes this Dyson’s best purifying fan yet.

Dyson Pure Humidify+Cool design and features – Quite chunky, but it looks as good as anything Dyson has ever made

In order to add humidity to its surroundings, the Dyson Pure Humidify+Cool has to include a water tank as the source. The 5-litre unit makes for a rather chunky base, with the fan measuring 312 x 312 x 925mm.

The size is a fair trade-off: five litres should last a day, depending on how much humidifying your home needs. And for those concerned about regularly replacing that tank full of water, Dyson has made the job simple: the tank rolls out on wheels, after which a handle flips up to make the unit easy to carry. The tank is relatively squat, so it should fit under most taps without issue. 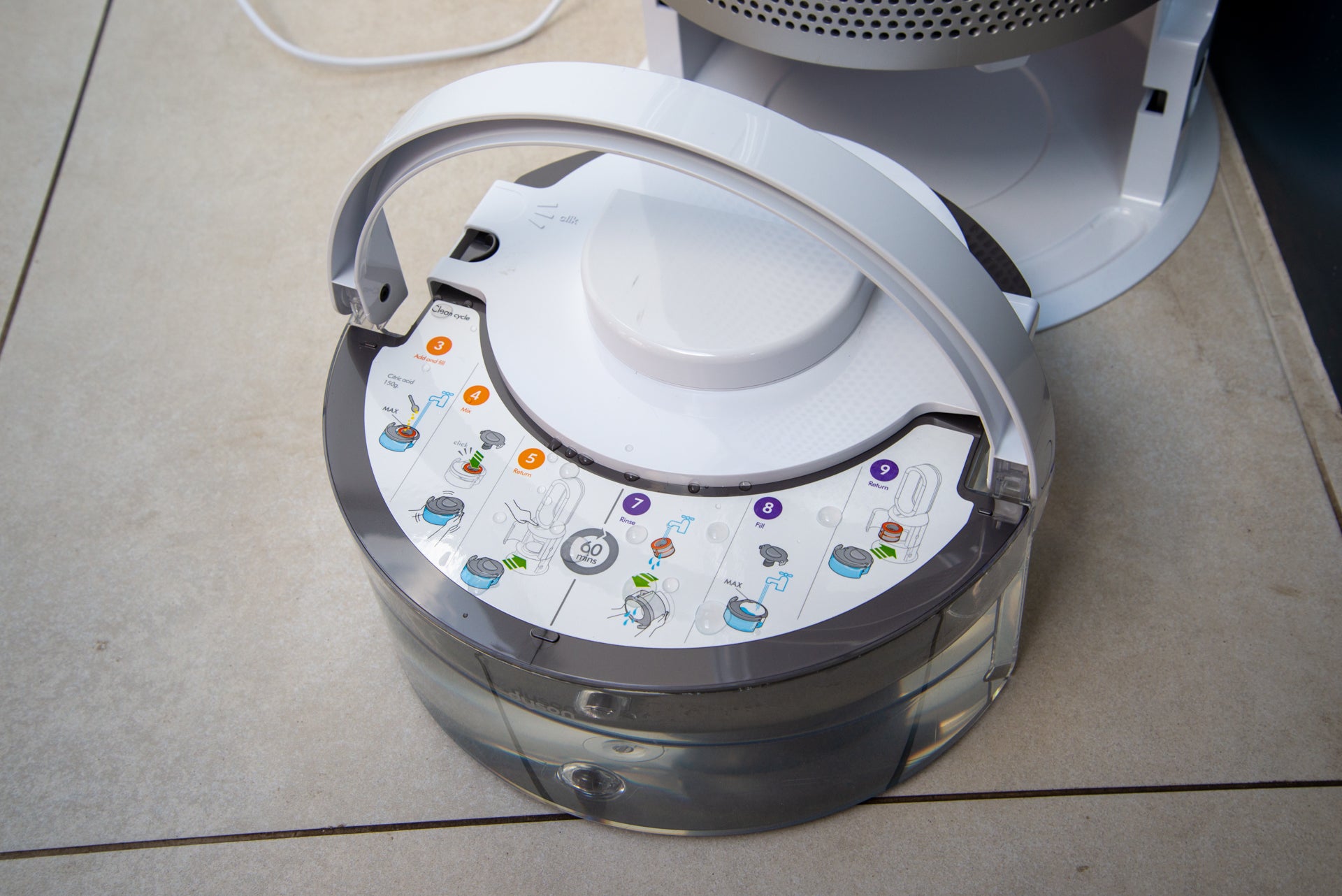 The water tank slides out on wheels

Water from the tank is sucked up through a PTFE tube, which is highly reflective to the UV-C light shining through it, effectively killing 99.9% of bacteria. Next, there’s a 3D Air-mesh evaporator, which uses silver thread to stop bacterial growth. The result is that the system can be used with a water tank that’s been left in place for some time without worry of spreading bacteria around your home: something to watch out for in a lot of humidifiers.

The evaporator has to be cleaned regularly – the fan will provide warning – but it can be dropped into the water tank along with some cleaning crystals, before engaging the simple hour-long cleaning cycle. The task is similar to descaling your coffee machine regularly for optimum performance.

As well as humidifying, the fan can also purify your home thanks to the filter. This model has a microfibre filter to capture particles as small as 0.1-microns (including allergens, bacteria and pollen), and an activated carbon filter that deals with gasses. Here, the two parts of the filter are combined into a single unit that will need replacing, on average, annually – although the fan keeps track of usage and will provide notification it’s time to change the filters.

The main fan unit may look like others in the Dyson range, but there’s a slight difference. Rather than having a thin slit running around the fan’s head, there are two barrels in the side of the fan that move independently. The reason for this is because the water tank makes it impossible for the fan to oscillate, so the barrels do the job instead, giving you a 90-degree arc. 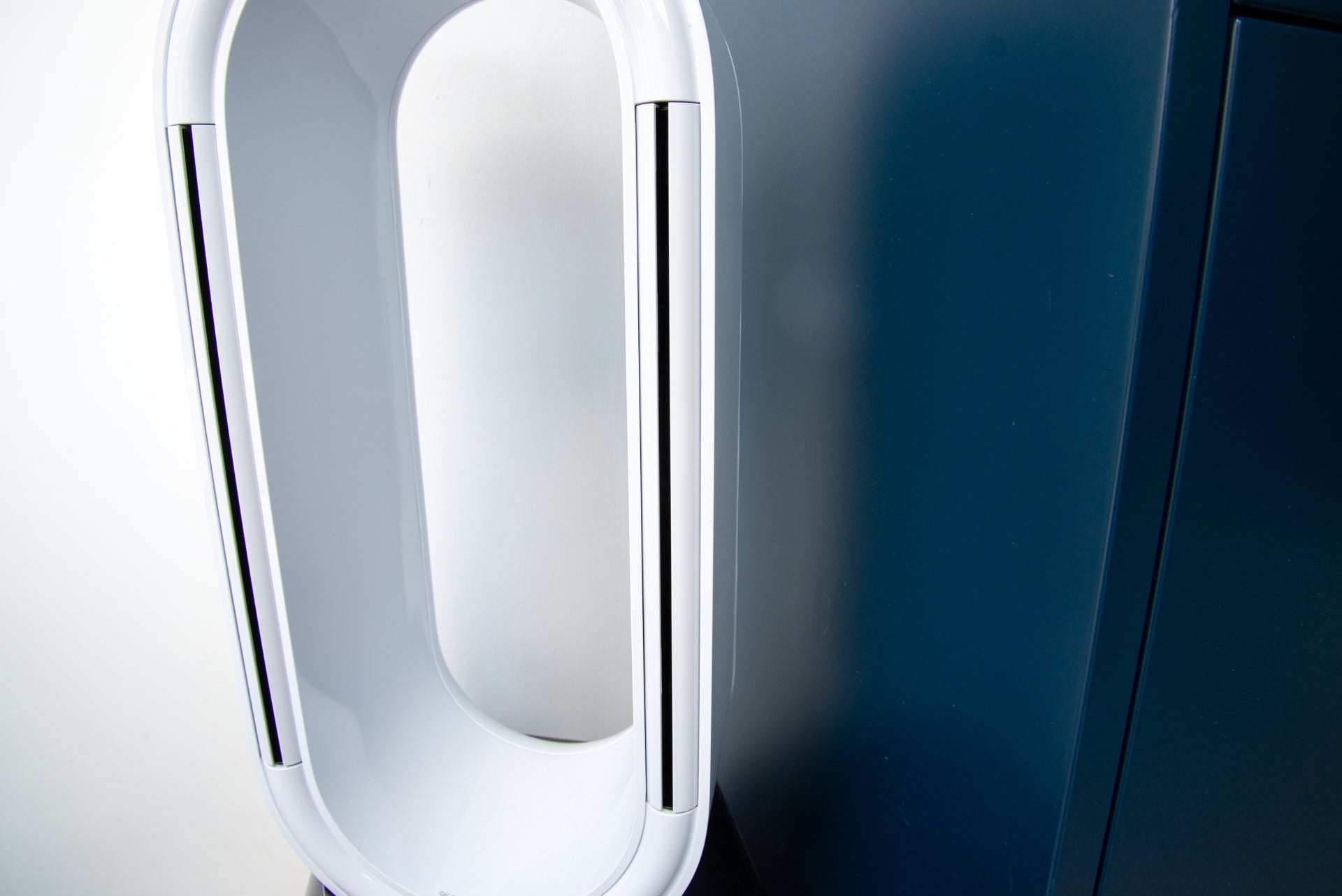 They also enable the new Breeze mode, where the barrels rotate independently of each other. The result is that you should always have a bit of air on you, increasing and decreasing in intensity, rather than the famine or feast of traditional oscillation.

If you want to purify or humidify when the weather is colder, the barrels can rotate all the way round and expel air out of the back in diffuse mode, giving you all-weather use.

A screen on the front of the fan displays the current settings, and you can cycle through the information screens using the “i” button on the remote control. These show everything from the current temperature, to air quality, to the level of particulate matter (PM2.5 and PM10), NO2 (a gaseous pollutant from cars) and VOCs (Volatile Organic Compounds), plus humidity levels.

As always, direct control is via the remote control, which neatly attaches to the top of the fan. The remote accompanying this model is a little more complicated than units supplied with some other Dyson fans, since there are controls for the fan and for the humidification.

Using the remote you can set the humidity level by using the up/down controls on the remote, with settings from 30% to 70%. You’ll want to aim for 40% or 50% for general use. You can turn the humidifier on or off using the Auto mode button, although the fan will do this automatically when the target humidity has been reached. 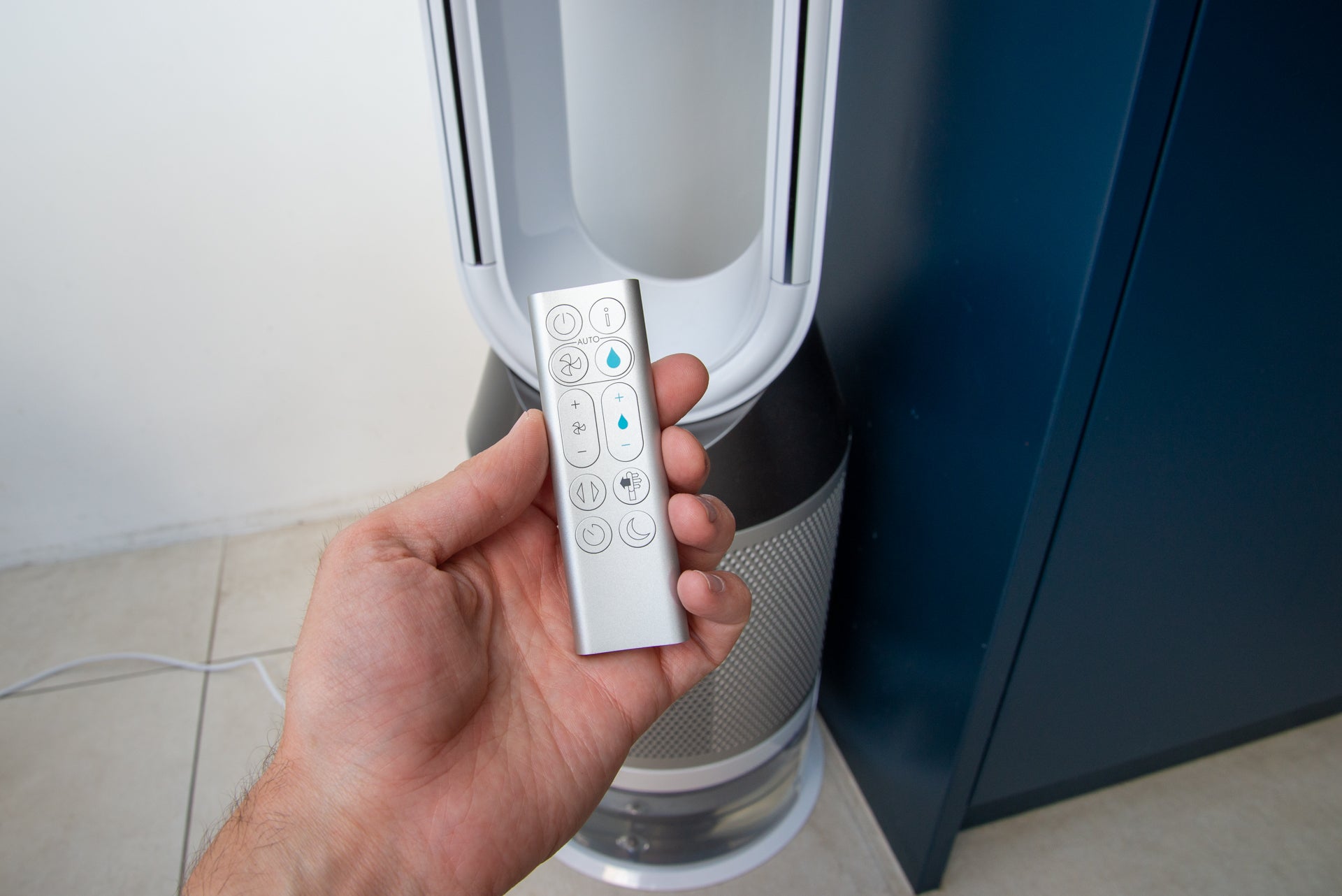 Fan controls are similar to those included on other Dyson fans, letting you set a fan speed between one and 10. If you use the Auto mode, the fan will automatically use its sensors to detect air quality, boosting fan speed when it’s dirty and turning off automatically when the air is clear.

The oscillation button lets you choose 45-degree, 90-degree or the new 90-degree Breeze mode, and you can also select to direct air out the back of the fan. There’s a Night mode, too, which dims the screen and limits the fan speed. A handy timer gives you the option of a 30-minute countdown, or hourly from one hour to eight hours.

As with most of Dyson’s new kit, the fan can also be controlled through the Dyson Link app. Here, you get all of the same controls, plus historical air quality readings. You can set a Schedule for when you want to your fan to operate (and the mode in which to operate) and when you want it to turn off, too. Full control is available in the Dyson Link app

The Dyson Pure Humidify+Cool works with Amazon Alexa; the skill has recently been updated so that the fan (and other Dyson fans) appear as proper devices. This lets you control features from the Alexa app directly, include options in Alexa Routines (say, turning the fan off if there’s no motion detected from a Hue Motion Sensor), as well as letting you use voice control. Sadly, there’s still no Google Assistant option. 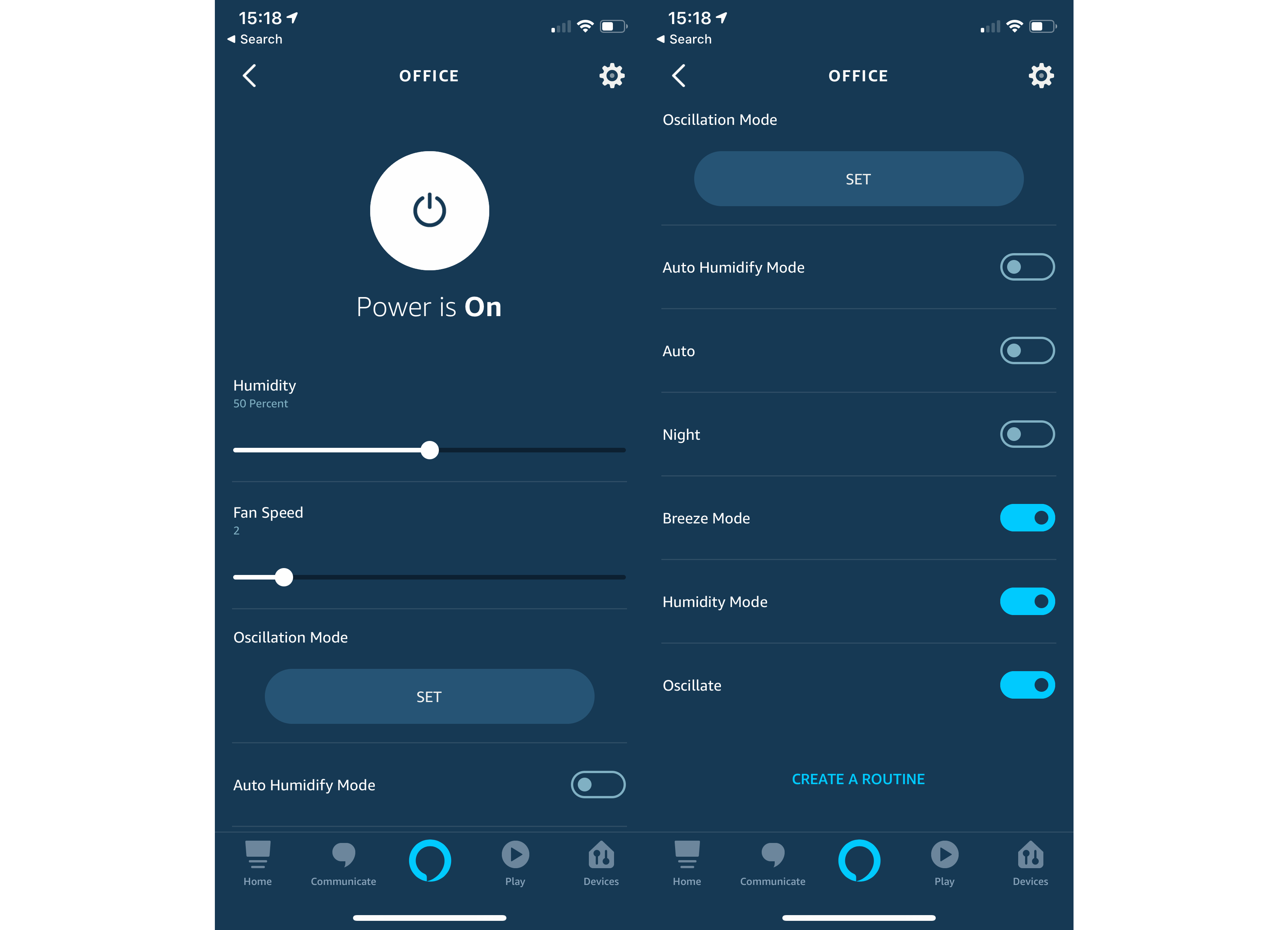 Dyson Pure Humidify+Cool performance – From a gentle breeze to a huge jet of purified, humidified air

Using separate humidity sensors, I found that the Dyson Pure Humidify+Cool was able to get my room to the target humidity level, cutting off at the right point. That’s important, since a room that’s too humid can result in issues such as mould growth. For those who suffer dry skin conditions, at the right humidity level skin is healthier and less prone to cracking. You’ll notice this is more of an issue in the winter, when the heating dries out the air out, but it can be a problem in rooms with air conditioning too.

Observationally, the new Breeze mode is brilliant. With it engaged you’ll always feel a gentle waft of air on you; but it feels more natural than modes used on other devices, where the fan speed is adjusted.

In Auto mode you’ll find the fan regularly ramps up, since the sensors spot problems in air quality, whether that’s a result of cooking, dusting or pollution entering the home from outdoors.

To see how quickly the Dyson Pure Humidify+Cool would deal with pollution, I lit a smoke pellet and shut the doors to my office, burning it for 60 seconds. Through the window I could see smoke being pulled into the fan, clearing the room to increase visibility. Using my Nest Protect as a guide for air quality, the Dyson Pure Humidify+Cool managed to clear the room in 10mins 33secs, which is impressive given the amount of smoke and particulate matter in the air. Thereafter opening the office door, the room smelt fresh without a trace of smokiness.

As a fan, the Dyson Pure Humidify+Cool performs as well as other models in the range. Air movement is hugely varied between settings. On the lowest fan setting, the Dyson Pure Humidify+Cool pushed air out at 1.2m/s from 15cm away; from a metre, the airflow can be felt a little but I couldn’t measure it. Sound is a gentle hum that can’t be separated from background noise.

At full power, I measured the fan at a huge 4.4m/s from 15cm and 1.6m/s from a metre away. It’s a powerful gust of unbuffered air. Even at this level, the fan is quiet, and I measured it at 59.7dB from one metre away.

Should you buy the Dyson Pure Humidify+Cool?

You can buy cheaper fans from my best list that will simply cool, but the Dyson Pure Humidify+Cool offers so much more – although it’s an excellent and powerful fan too.

Then there’s its accurate and clean humidifying. Humidifiers are oft-overlooked in homes, but by increasing moisture in excessively dry conditions, you can improve skin health and reduce nose, throat and lip problems.

With the smart features providing total control, the Dyson Pure Humidify+Cool is a great way to keep yourself cool and improve air quality all year round.