Whilst considerably quieter than you would expect a device kicking out 28 litres of heated or cooled air per second to be, the Dyson Hot + Cool is far from whisper quiet.

Located in a sizeable living room, the multipurpose device managed to warm us to around the 20 degrees mark with little effort, only requiring us to increase the volume on the television two clicks, an increase that saw the hum produced by the Dyson Hot + Cool disappear into almost soothing background noise.

Although with first use there was a slight electrical odour to the air kicked out by the machine, this soon passed and the Dyson Hot + Cool left us with a room filling heater that offers instant effects in an otherwise chilly environment.

Despite being able to heat a room to up to 28 degrees, this process takes a considerable amount of time, pushing the device to its limits. Although offering noticeable increases in temperature from the off, hitting these higher limits felt more of a strain, especially when tested in a somewhat drafty bedroom with extremely high ceilings.

When attempting to catch the machine out, the Dyson Hot + Cool really showed its true potential. Having heated our room to beyond 20 degrees, we quickly shuffled the device’s temperature down into full-on cooling fan mode. Despite this slightly unlikely use, the unit offered instant response, switching its heated airflow to a refreshingly cool output in surprisingly spritely fashion. 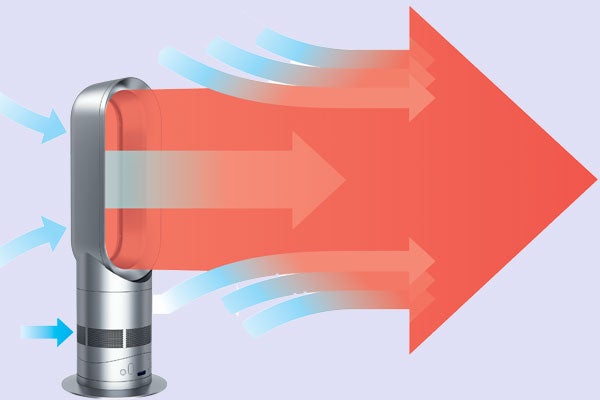 Having dramatically improved the cooling elements of the device over the original Dyson Hot, the Dyson Hot + Cool is more than capable of being a sole cooling fan, producing a smooth, even stream of air that, thanks to its brushless motor is clean and refreshing.

Pushing the fan hard, returning home from a sweat-inducing run, the fan elements of the multiuse device produced instant reprieve from the discomfort of carrying excessive warmth.

As well as producing strong results, the Dyson Hot + Cool is brilliantly simplistic to use. Paired with a compact remote control that features a sensible layout, the device’s temperature, intensity and oscillation can also be altered by a selection of controls built into the unit’s base. Adding to this, the oscillation and tilt mechanisms of the Dyson heater turn fan allowed us to be more precise when directing our airflow stream, perfect for when trying to cool down fast (directed tilt) or add some instant heat to a larger space (wide angle oscillation).

Building on strong foundations, Dyson has added a selection of sensible safety features to the Dyson Hot + Cool which help offer piece of mind when leaving the heated unit unattended. As well as having no external heating elements, if knocked over the device turns itself off. Although in practise it took a couple of seconds to recognise the fact that it is no longer upright, the air multiplier was relatively prompt in sensing the potential danger and finding a solution to the issue in shutting down.

Adding to the safety elements, even after almost an hour’s heavy usage, the exterior of the device was not too hot to touch, again perfect for those with young ones who could otherwise be hurt. 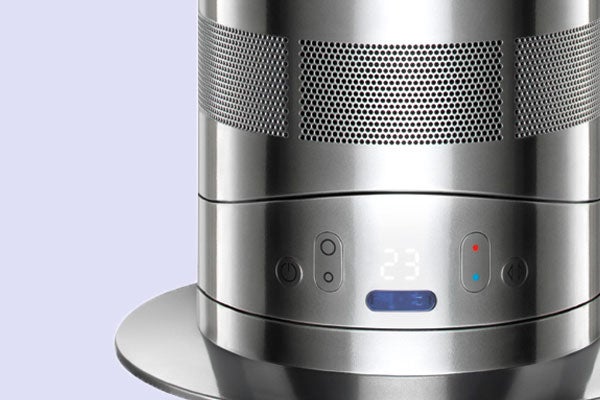 With a Dyson Hot + Cool price tag seeing wannabe owners tasked with forking out a hefty £349.99, there is no getting away from the fact that this is one extremely expensive luxury fan.

Although in being paired with a two year parts and labour guarantee, the Dyson Hot + Cool helps justify its steep price tag, it is impossible to avoid the fact that this is a premium device designed for those with a premium budget.

That said, once the initial outlay has been made, the Dyson Hot + Cool does much to help save users money, skimping on the energy consumption to offer maximum heating potential for the minimal outlay. Ideal for those who spend a lot of time at home in a single room and are deterred from using central heating to unnecessarily warm the entire building, the unit’s inbuilt intelligent thermostat helps maintain a desired temperature.

Cutting out when a set temperature is achieved evenly throughout the room, the Dyson Hot + Cool uses just 1w of energy whilst on standby mode, further helping to save the pennies, before kicking in to top up the heated airflow if temperatures once again dip. 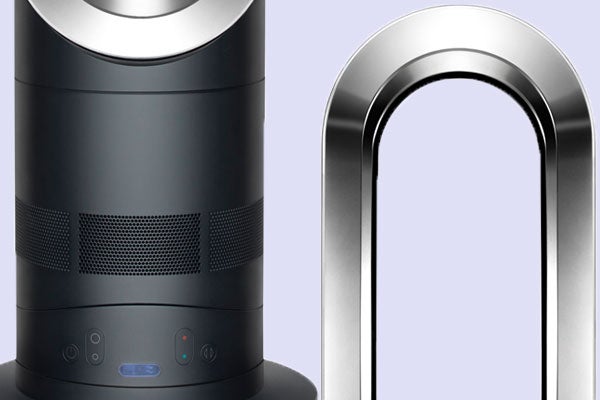 Aside from the obvious £349.99 pricing constraints, the Dyson Hot + Cool is a strong performer that handles its dual heating and cooling capabilities with equal, user satisfying aplomb.

Heating our high ceiling, spacious rooms quickly, relatively quietly and with a welcome lack of fuss, the Dyson Hot + Cool is brimmed with performance enhancing safety features and money saving energy efficiency that make it a more viable option than its lofty price tag might first suggest. What’s more, there is not getting away from the fact that it looks fantastic.

Although not an option for everyone, the Dyson Hot + Cool will be a much loved addition to the gadget arsenal of anyone who buys it and, with the ability to satisfy the temperature demands of users all year round, could potentially just about justify its price tag, eventually.