There is something hugely admirable about Dyson.

The British company regularly invents what arguably could be considered revolutionary technology, but chooses to do so for humdrum household objects like vacuum cleaners, hand dryers and fans. It’s bonkers, but brilliant and typically with price tags to match. So what happens when Dyson makes a heater?

The result is the Dyson Hot (AM04) and, naturally enough, it aims to revolutionise the way the well heeled keep warm. The design is pure Dyson, minimalist yet curvy, though it diverges from the lollipop-shaped Air Multiplier (AM01) fan in favour of a straighter design which looks like the close up of the eye of a needle. The shape change is largerly down to the heating elements that need to be incorporated into the tall sides of the new design.

As for build quality, the same love it/hate it Dyson qualities are also on show with a primarily plastic construction, matt finish and the usual choice of just two colours: white and silver or grey and blue. The latter looks better to us, though clearly your choice will depend on your existing decor. Like most Dyson products the Hot gives the impression it will be durable and wear well.

Of course what really sells the Hot, however, is the technology inside. This is the same Air Multiplier technology Dyson uses in the AM01 (which we now think should be rebranded the ‘Cold’) and it works by sucking in air through the grilles in the base and firing the airflow from a continuous thin vent that runs around the inside of the open section. The benefits are a more consistent flow of air, increased safety from no exposed fan blades and most importantly of all a much more powerful, longer range flow of air.

The Dyson Hot uses ceramic heating elements so avoids the burning smell you get with cheaper metal coil-based fan heaters. Also, the way the elements are mounted in the sides of the fan means that the top curved section remains relatively cool to the touch so acts as a carry handle that can be used even when the fan is on – very convenient for quickly aiming the fan in another direction. 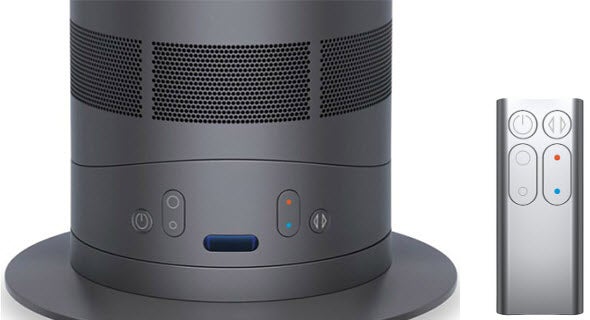 Other innovations inside the Hot include an automatic cut out if the unit is tipped over, tilt adjustment and – like a desk fan – automatic rotation on its base to distribute air over a wide angle. Most importantly of all, though, is that you can drop the temperature all the way down and simply use this as a conventional fan, making it a true one-stop replacement for both a desk fan and a fan heater.

For those unable or too lazy to get up, the Hot comes with a simple remote with power, speed and temperature controls as well as the ability to start or stop rotating. A nice touch is the controller contains a magnet and will store neatly on the top of the Hot.

Essentially the Dyson Hot performs very similarly to a bog standard
fan heater in terms of the amount of hot air it pumps out. However, the
way the air is projected means it does heat a room much quicker and more
evenly than other fan heaters we’ve tried.

Also, the air flow is – or, thanks to the temperature control, can be –
pleasingly warm rather than hot even when closeup. This means that
whoever’s sat next to the fan doesn’t get roasted while everyone else is
still freezing. Equally, though, this does mean you don’t quite get
that quick hand-warming effect that a normal fan heater provides.

Our other main gripe is that the temperature control doesn’t control the
ambient room temperature but rather that of the air leaving the fan. So
if you pick a nice ambient temperature of, say, 20 degree Celsius,
instead of getting the room up to temperature and turning off for a
while – giving the user some peace from the fan noise – the Hot simply
steadily churns out rather tepid 20 degree air. 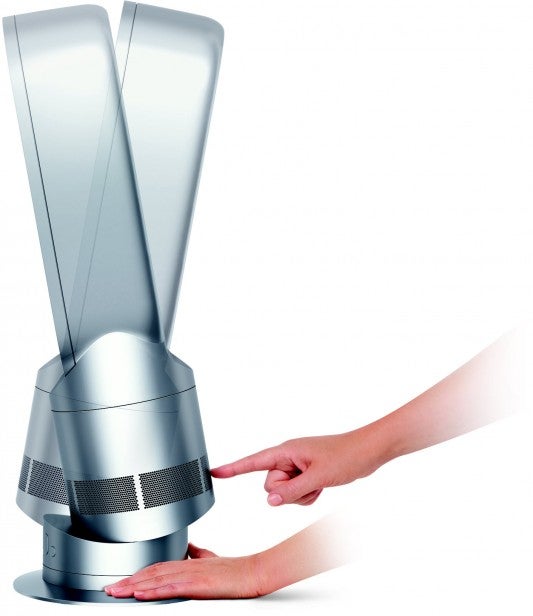 The above is particuarly an issue as the Dyson Hot isn’t exactly quiet. It’s not significantly worse than a normal fan heater but it’s nonetheless the case that you wouldn’t want to use this as a background heater. Instead we’d recommend a classic oil filled radiator for those situations.

On the cold (air) front, the Dyson Hot performs rather better, providing a powerful cooling stream of air that thanks to the automatic rotation can be shared across a whole room of people. As with the not-Hot Air Multipliers, though, there’s no option to mount the Hot on a wall as you can with most normal desk fans.


All
of which brings us to the inevitable downside of any Dyson product:
price. Its 2-in-1 hot and cold functionality arguably suggests it offers
greater value than the cold-only AM01, but with a £299 RRP it is £100
more expensive. We have seen the Hot available online for £250 (and the
AM01 for £170), but it is still a sizeable outlay for something that, when all is said and done, probably won’t get used that often (unlike a vacuum cleaner). We’d suggest the outlay would be best
spent turning up your thermostat during winter months for a number of
years. 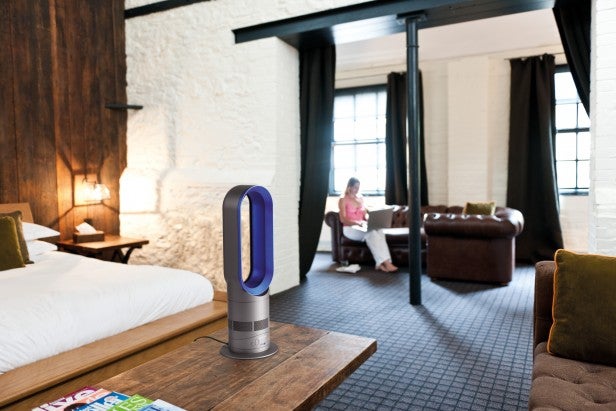 
In
many ways the Hot is a typical Dyson product: smart, innovative and
arguably stylish, but like most Dyson products it also costs rather more than much of the competition. Dyson arguably gets away with charging a premium with its vacuum cleaners (and its hand dryers we suppose) because they’re something everyone needs anyway. But both cooling desk fans and fan heaters are hardly what many people would consider essential to everyday living.

Nonetheless, there is something compelling about the all-in-one approach of the Dyson Hot and if money isn’t an issue it definitely gets the job done.