Introduction
Although its tried diversifying over the years by moving into and out of the washing machine market and even reinventing the desk fan with its Air Multiplier, Dyson is still best known for its vacuum cleaners, and nowadays there are plenty to choose from. The Dyson DC34 Animal is one of the company’s cheapest models – second only to the non-Animal DC34 – though for good reason: it’s a handheld. Claimed to be the most power handheld vacuum cleaner in the world, Dyson reckons it has twice the suction power of any other.

Design and Features
Powerful it may be but what the DC34 Animal isn’t, though, is particularly small. As with all Dyson’s it uses bagless cyclone technology for its suction so has to incorporate a relativity large cylinder section. Add the handle, battery pack and an accessory on the end and it takes up a fair bit of space – 205 x 115 x 322 mm (HxWxD) to be exact. 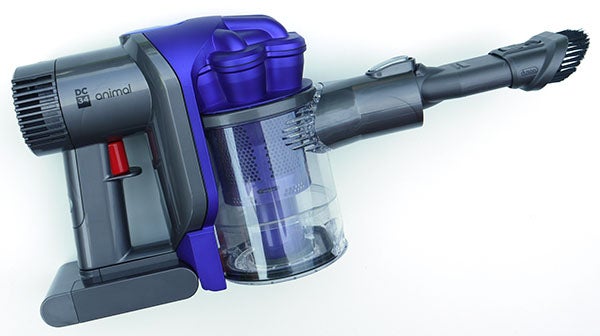 This larger than average-handheld size has its issues when it use, which we’ll come back to later, but the more immediate issue is storage. Many handheld vacuum cleaners come with wall mountable charging and storage cradles. Not so the DC34 Animal. Instead you will need a fairly deep shelf on which to store it and its accessories. And you’ll want it to be reasonably accessible too, as the charger plugs in using a conventional plug rather than an easy docking system.

So far so not-particularly-convenient, but there’s still plenty to like about this cleaner. For a start, you get three genuinely useful accessories included. One is the eponymous Animal, a motorised brush head which is about four inches wide and designed specifically to – you guessed it – help picked up animal hair from carpets. Without this accessory you have a standard DC34 which comes with the same two other extras: an 8in long crevice tool and so called combination tool. The latter is either a wide angled tube with incorporated short bristled brush, or you can slide forward the longer brush element to provide a reasonable size brush tool – great for general purpose dusting-style hoovering. 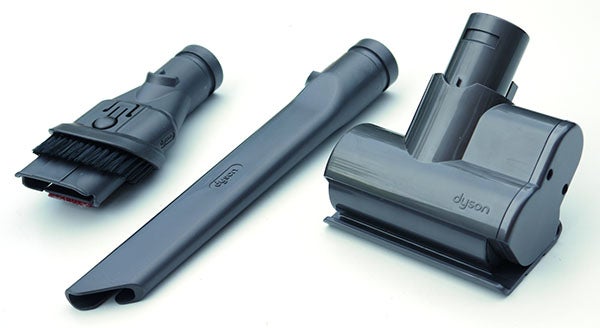 Not only do all the accessories feel like they’re actually designed by someone that knows what it is you want from each one – i.e. they work – but the way they attach to the main body of the cleaner is pleasingly easy. Rather than a friction fit, they use a proper clasp mechanism that makes it really easy to change the tools yet holds them securely when in use. 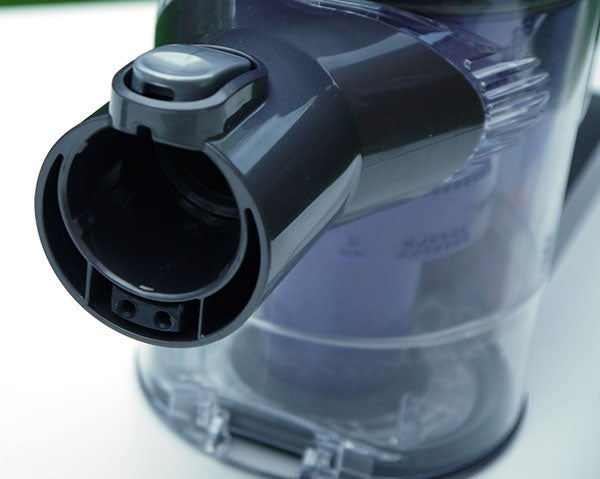 The “designed by someone that knows…” line could easily apply to the rest of the design. We could take or leave the actual styling – it’s funky enough but isn’t exactly a work of art – but what does appeal is that form follows function. The balance of the thing is just right with the weight being towards the back where you hold it. The gun-style upright grip is also very comfortable in use, as is the really light to the touch trigger that only activates after it’s held down for half a second or so (actually, we’re not entirely sure if that delay is a good or bad thing). 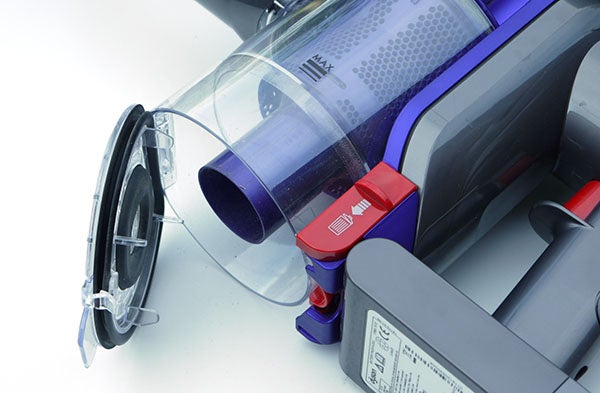 The key selling point for any Dyson vacuum is pretty well taken care of too. Namely, it’s easy to empty the 0.35l bin without getting messy. There’s one slight downside which is that the flap that flips open upon pressing the large red slider on the left edge does so towards you rather than away from you. As such it takes a bit of practice to not tip everything all over yourself or miss the bin.

Press the other red button on the bottom and you can remove the whole clear cyclinder in order to clear out any stubborn detritus. If you find the cleaner starts to become smelly or less effective you can also clean out the replaceable filter – something you should only need to do every few months. Press the purple button on the top and the whole thing spilts in two to easily access the filter.

The DC34 range have two power modes – high and low. The former delivers
8mins of operation while the latter nearly doubles this to 15mins, with
suction power reduced by about half. In normal/low mode, it really is
only suitable for dust-sized particles that are lightly engrained into
any given surface. Stubborn dirt or larger particles will quite often be
missed unless you’re really persist and precise about how you place the
nozzle.


Switch to high power mode, though, and the 104,000rpm motor shows its
chops, making the DC34 immediately become more versatile, picking up
larger loose items and more ingrained dirt. It’s still not a patch on a
full-size mains vacuum but could just about suffice as you main vacuum
if you’re short on space. 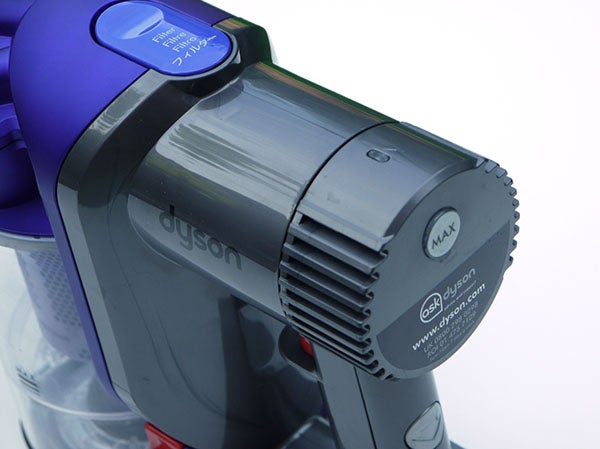 Compared to other handhelds there’s a clear advantage in terms of raw
power but as much of an advantage are those accessories. The crevice
tool and main brush are great for poking in all the nooks and crannies
of your house or car, while the rotor brush is brilliant for carpets,
rugs and other upholstery. 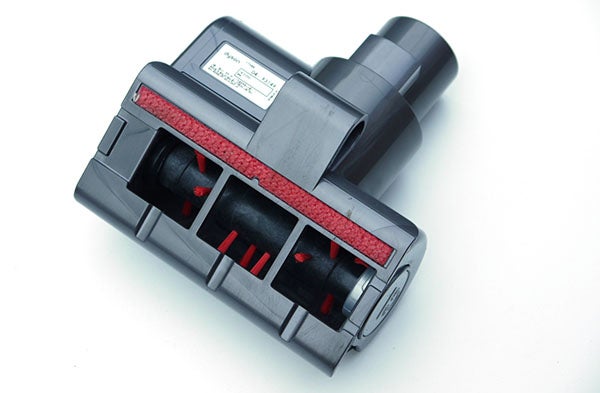 There is a fairly major potential downside when viewing this as mainly a
portable vacuum though, rather than one to perform double duty as your
main cleaner too. As well as simply being portable thanks to being
battery powered, one of the key attributes of a handheld vacuum cleaner
is that it’s small, and as mentioned earlier that isn’t really the case
here. As such, there are times when you simply can’t get an angle to get
the business end of the cleaner into position because the rest of it’s
wedged up against a car seat or such like. The backseat footwells of
cars and gaps underneath furniture or kitchen cupboards are the most
obvious areas of concern here. Some smaller handheld vacuum cleaners are
slender enough that the whole thing will slide under a kitchen cupboard
for instance.

As for longevity, we found Dyson’s claimed figures to be pretty
accurate. This is fine for occasional spillages, cleaning the car or
having a quick spruce up, but if you’re having a proper spring clean
you’ll probably find it only lasts a couple of rooms rooms before
needing a recharge.


A final plus point of note before we look at value is that the clear,
easy to empty collection cyclinder does make it particularly easy to
pick through any rubbish if you think you’ve hovered up a receipt or
precious penny. 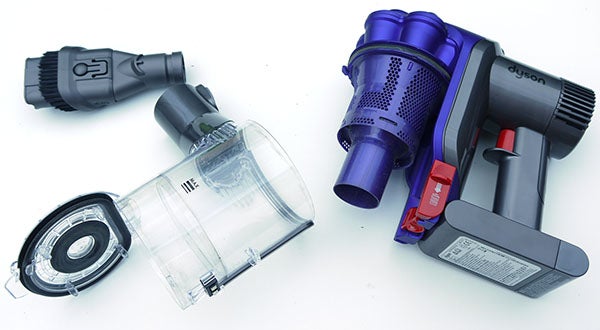 As with nearly all Dyson products, where the DC34 Animal potentially
falls down is price. At list price (£199.99), it’s simply too expensive
but for the £150 or so you can find it online for it’s just about worth
considering. Other handheld vacuums can be had for as little £20 so you
really are paying quite a premium here but we feel there’s just about
enough on offer here to make it worth while.

The Dyson DC34 Animal is a great handheld vacuum cleaner. It’s more
powerful than any other, it has some neat accessories and it’s really
well designed in terms of usability. However, it is bulkier than many
handhelds, doesn’t really rival full-size models for power, and is
expensive. It’s certainly not a foolish purchase but not an outright
recommendation either.