What is the Dyson Cool AM06?

The Dyson Cool AM06 is a direct replacement to Dyson’s first foray into the desktop fan space – the at-the-time forward-thinking AM01. The Dyson Cool AM06 adds a sleep timer, a more refined design, and Dyson reckons it’s 75 per cent quieter and uses 40 per cent less power than the AM01 or the Dyson AM02 tower fan.

With prices starting from £220 for the Iron/Blue and White/Silver options (the Black/Nickel version reviewed is £30 extra still), the Dyson Cool AM06 is far from cheap. But, as before, you’ll struggle to find a desktop fan as sophisticated as this, and we still love it for that. 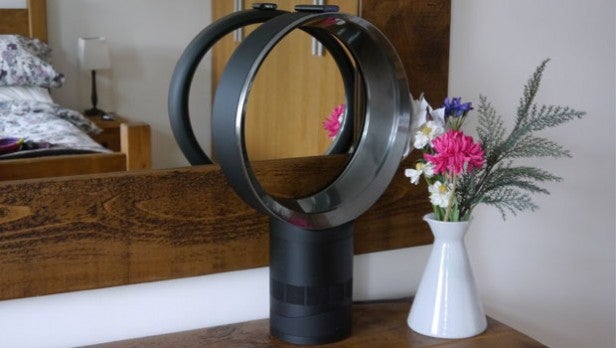 The AM06 is very much an iterative update, rather than a major refresh, but that’s no reason to be disappointed. Despite only small adjustments being made to the still futuristic looking bladeless fan, the AM06 is Dyson’s best looking air multiplier yet.

A larger, 30cm diameter airflow amp (that’s the bit in the middle where the ‘fan’ would normally go) accentuates the air multiplier’s stylish bladeless design, while removing all of the fan’s base mounted physical controls – bar a power switch – gives it a sleek, uncluttered finish.

This new design comes at some costs, however. The AM06 is two inches taller (12-inches total) than the AM01, making it an imposing addition to any desk or tabletop. At 1.8kg, it’s still very portable – you’ll have no problem carting it from desk to bedside or kitchen and back – but you’ll notice it more wherever you keep it. We’re not totally sold on losing the physical controls, either. It means you have to rely solely on the rather easy to lose remote when we’d sooner reach across and adjust the speed directly.

As with past Dyson Air Multipliers, however, this remote – which controls all elements of the fan – can be magnetically attached to the top of the fan when not in use. This handy, clever and stylish storage mechanism goes some way to overcoming the pitfalls of a button-free base unit.

Another hangover from Dyson’s past air multiplier fans – this one unwanted – is the amount of dust the AM06 attracts. Both its soft touch and hard plastic elements are prone to attracting dust in vast quantities. Aside from looking ugly, it means you’ll suffer a gust of dust when turned on unless you’re an attentive duster. We’re not sure how Dyson could combat this, but it’s an annoyance that persists. 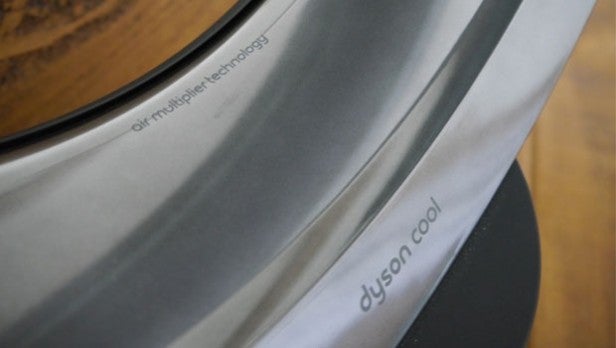 Dyson Cool AM06: Features and Performance

First things first, this is a fan, not an air conditioning unit. The AM06 does not produce cold air itself, instead it draws air in through its base, accelerating it through a tiny, directed aperture in order to create a cooling effect. Unlike traditional bladed fans, however, it does this in a smooth, unbuffeted manner, with a steady continuous flow of air helping better regulate the temperature of your body and room.

As with design, the performance improvements of the Dyson Cool AM06 over its predecessors are very much a case of evolution rather than revolution, with the addition of a sleep timer being the main new addition and one that’s a little overdue.

The sleep timer can be set using the remote control at a number of pre-set intervals from just 15 minutes to a full 9 hours. It’s easy to setup using the remote and the small LED screen, but there’s no way to monitor how long the fan has left. It’s not a major problem, but it would be useful to know.

Using the AM06 for a couple of weeks, we have nothing but praise for the sleep timer. Once the fan’s inbuilt timer hits the desired cut-off point, the AM06 simply shuts down, no fuss, no fanfare, just a gradual decline in airflow until the machine falls completely silent. It’s a very useful way to ensure you don’t wake up all hot and bothered, and that the fan is already running to keep you cool as you go to sleep. 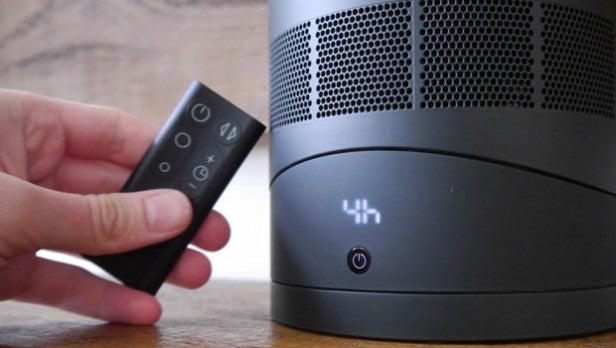 Like the company’s past air multipliers and heaters, the Dyson Cool AM06 benefits from the same tilting head mechanism, allowing you to better direct the outpouring airflow. Similarly, the mechanical oscillation – rotating in a long left to right arch and back again – is included alongside ten power levels that let you choose from everything from a gentle puff of air to a hearty gale.

Even if opting for stormy gusts of air, the latest Dyson Cool is still reasonably quiet. The AM01 was far from loud, but the AM06 is even less disruptive. Used in the living room while watching TV, two upward clicks on the volume control will easily cover the air multiplier’s drone. More importantly, used in a bedroom, the AM06’s gentle whirring of air won’t keep you awake.

Dyson has reduced the noise of its latest fan by 75 per cent, not by witchcraft or sound absorbing cotton wool, just a couple of small alterations that combine to make a big difference.

By tightening the airflow tubes within the fan, Dyson has significantly reduced air turbulence and as such much of the reverb, which can cause a lot of noise. These efforts have earned the AM06 a Quiet Mark award for its reduced noise – an award managed by the Noise Abatement Society charity. 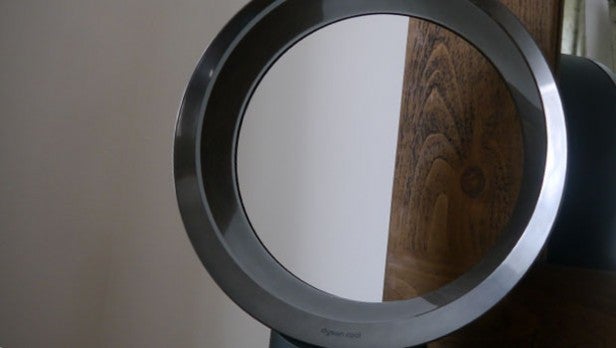 Should I buy the Dyson Cool AM06?

As always with Dyson products, the AM06 is expensive. At £220 this fan is not easy on your wallet and for those concerned only by the need to cool down, there are dozens of basic, traditional fans that will do the job to some extent for the tenth of the price.

A two-year guarantee should go some way to appease those with cost concerns, although the air multiplier is still heavily reliant on its stunning design to make it a worthy purchase.

However, if you’re finding it hard to sleep with our warm summer nights, or need a quick cool down at your office after a lunchtime run or gym session, you can do much worse than the Dyson Cool AM06.

There are not enough new feature additions or benefits to make the AM06 a must-have upgrade, but for those with the cash to burn and the need for something stylish and effective, the Dyson Cool AM06

The Dyson AM06 is a perfect companion for warm, muggy nights. The addition of a sleep timer removes the need to compromise comfort over energy saving, while the reduced noise means keeping cool won’t keep you awake. You are still paying for style and a brand name, though.