The AM08 is the Dyson’s pedestal version of its desktop fan. This model adds in full height adjustment, making it a little more flexible than the desktop versions. It’s a cooling-only product, so you don’t get the heat options or air purifier of the Pure Hot+Cool Link.

There’s no mistaking the distinctive look of Dyson’s fans. On the AM08, the large bladeless fan head still looks as impressive today as it did when the first Dyson fan was launched; there’s something quite neat about being able to stick your head through the middle.

One of the main reasons to opt for a pedestal fan is for the greater range of adjustments that such models offer. With the AM08, you get height adjustment between 1110mm to 1410mm. Cleverly, the fan uses a simple telescopic pole that you pull up or push down. 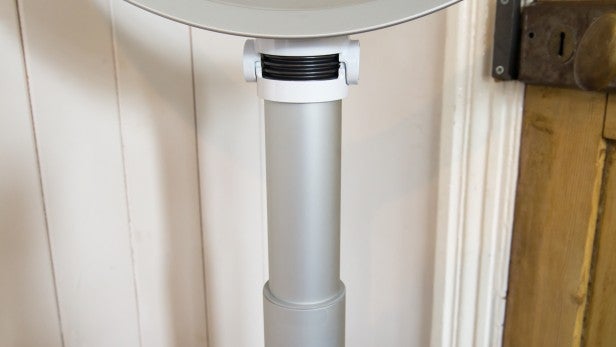 The fan head pivots, too, simply by grabbing the head and pushing it in the direction you want it to go. The tube inside, which looks like a spare part from a vacuum cleaner hose, holds the fan head firmly in position. 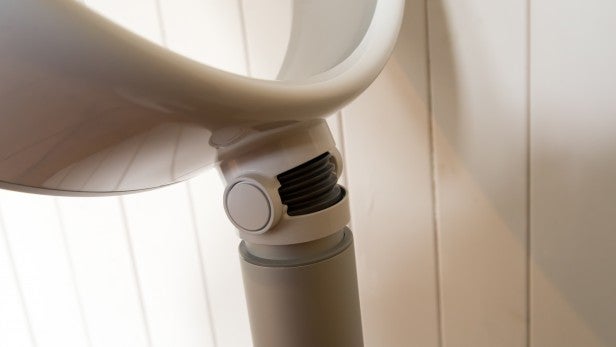 Since the AM08 doesn’t have any of the fiddly screws of other fans, making adjustments quick and easy. As a result, I found myself tweaking the position of the AM08 more regularly, adapting it to my situation, depending on whether I was sat at my desk or resting on the sofa. Motorised oscillation is built in, too, letting the fan rotatefrom side to side to cool an entire room.

There are no controls bar a power button on the base unit, so the neat remote control is crucial. Fortunately, as with previous Dyson fans, the remote is magnetic and attaches to the top of the fan, which makes it harder to lose. 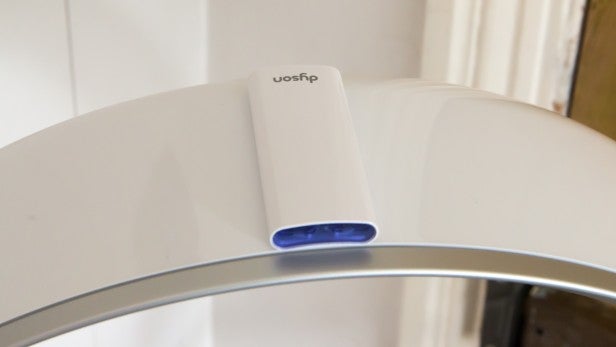 The remote lets you cycle through the fan’s ten speed settings, toggle the oscillation mode, and set the sleep timer: the fan starts in increments of 15 minutes and goes up to nine hours. Of course, you can power the fan on and off. A small digital display at the bottom of the base shows you the current fan speed, or the sleep timer setting that you’ve chosen.

Dyson’s Air Multiplier technology is at the heart of the AM08. Rather than blasting out varying degrees of airflow from a spinning fan blade, Air Multiplier offers up a jet of smoother airflow. If you hold your hand up to the head, you can feel that there’s a solid blast of air from the centre, but a thin jet emanating from all around the sides of the head. 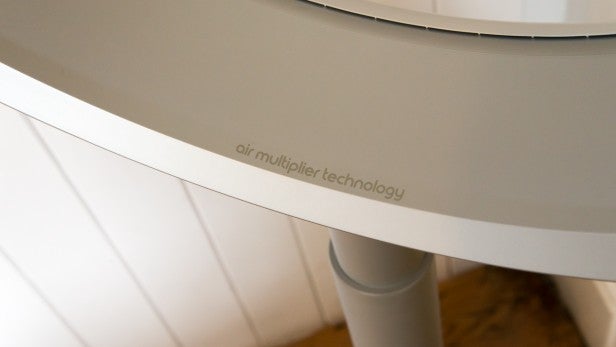 It’s a far less intrusive gust of air than you’d get from a traditional fan. Measuring from a distance of 15cm, I saw air speeds of 3.5m/s on the AM08’s maximum setting and 0.8m/s at the minimum setting. A traditional fan may shift more air when measured centrally, but they’re not as pleasant to sit in front of.

Moving to 1.5m away, airflow was a decent 1.8m/s at maximum, although our anemometer wasn’t sensitive enough to detect the subtle breeze with the fan set to its minimum setting. At maximum speed, the measured drop in air movement from close range to 1.5m is less than you’d see with a traditional bladed fan.

More importantly, the AM08’s ten speed settings offer a huge range. No matter whether you need a strong blast on the hottest day of the year, or just a trickle of airflow to help circulate air in a stuffy room.

One of the biggest problems with most fans is noise, but the AM08 continues Dyson’s tradition. At the lowest setting, I measured fan noise at just 40.08dB. Noise increases with fan speed, but the ten speed settings make it easier to find a balance between noise levels and cooling performance. I certainly found that this was a fan that I was happy to have on constantly, whether sleeping or watching TV. 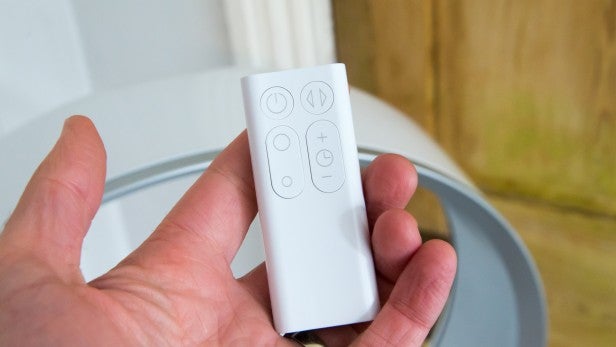 A pure decibel rating doesn’t tell you everything, however. While a lot of traditional fans are quite annoying, with the sound of moving air mixing with the motor and spinning blades, the AM08 is different. Here, you get just a slight hum from the motor and a lower noise from the moving air. Overall, the AM08 produces a far less intrusive sound than traditional fans.

At the lowest setting, I measured the fan as drawing just 5.1W of power. That’s super-low, and demonstrates that the AM08 is cheap to run on its lowest settings for gentle airflow. Go to maximum and power consumption increases to a still reasonable 50.7W.

Should I buy the Dyson AM08?

There’s no ignoring that, at £350, the AM08 is an expensive fan. That’s £100 more than buying the desktop version, the AM06. But, that’s not to say that the AM08 isn’t worth the cash. If you want a fan that offers plenty of adjustment, that you can run near-constantly, then the AM08 is the model to buy.

Arguably, if you just want a blast of air for hot days, a traditional pedestal fan will prove a cheaper option. If you want a model that can output heat and purify your air, the Pure Hot + Cool Link is the best option.