Need a bigger fan? Check out the new Dyson AM02 Mini Tower Fan

Famed for revolutionising the vacuum cleaner market via the appliance of science, Dyson turned its hands to the humble desk fan a few years back and came up with a suitably intriguing take on the design of the Dyson Fan. Called the Dyson Air Multiplier AM01, it forgoes a big fan blowing air directly at you but instead directs a constant stream of air through a large hollow ring, with the aim being to prevent buffeting – that pulsing effect you get from conventional fans as they chop through the air. It’s clever stuff.

So, with summer just about with us at last we thought it was high time we put Dyson’s many claims about the Air Multiplier to the test. 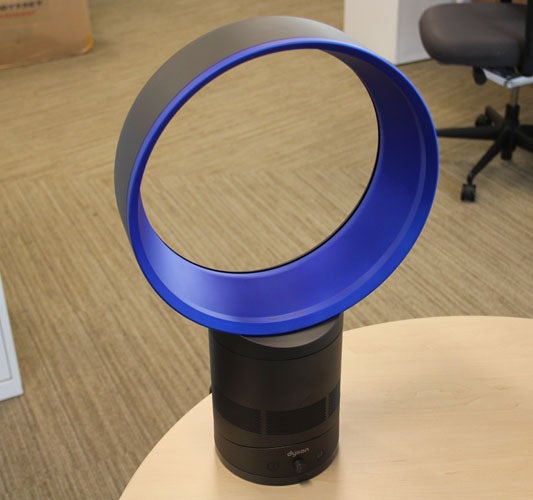 Straight out the box, you’re immediately struck by the same signature perfunctory elegance that typifies Dyson’s vacuum cleaners. The Dyson fan is all plastic but it’s solidly built and the simple colour schemes work well.

However, the AM01 lacks the innards-peeping clear plastic, weird and whacky accessories and various modular sections that the Dyson vacuum cleaners have, making it feel a little less, well, fun. This you just plonk on a sideboard or table and turn on, job done.

Well, not quite job done. You’ve got to choose your angle of tilt, whether to have the fan rotate back and forth, and what power level you want.

The first of these is controlled in a slightly odd manner. Instead of tilting the main ring, the whole assembly slides forward and back on the minimal base. The action works reasonably well, certainly compared to the equivalent adjustment on many cheap fans – you can just about do it with one finger, but is still a bit stiff and awkward. Moreover, you can’t tilt the fan to 45 degrees and use the base as a wall mount, as you can on even the most basic standard fan. 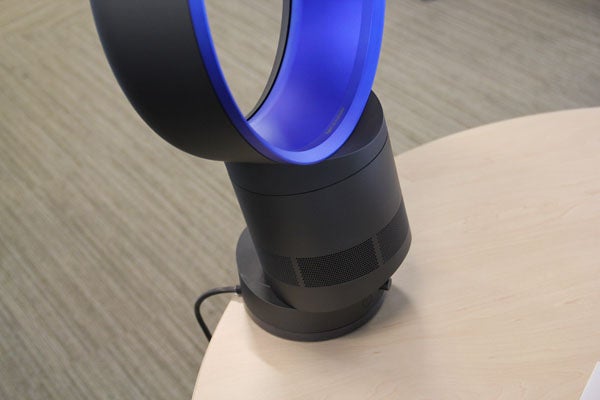 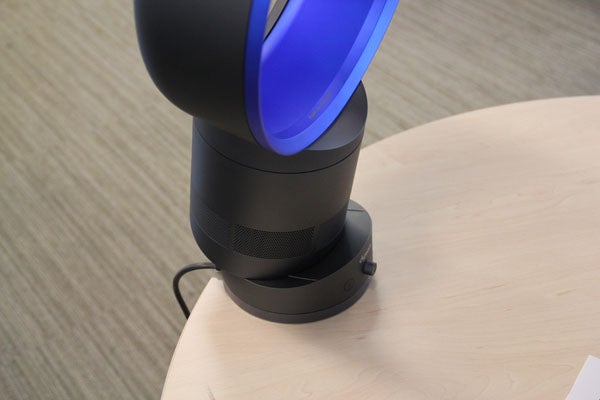 As for auto-rotating, there’s a little backlit button on the right that sets the thing going on a 45 degree arc back and forth.

To the left of this is the power dial. The fan is rated to shift up to 33 litres of air a second, which isn’t actually all that much – it’s about equivalent to a kitchen extractor fan. In comparison a conventional similar size desktop fans will shift up to double this. But, it’s plenty enough for normal household use and, crucially, with that dial you can fine tune the speed to be just right.

This is particularly useful as noise is something of an issue with this fan. Even from a relatively low setting, the high speed fan that sits at the heart of the Air Multiplier is still quite audible. Starting off as a gentle whooshing sound, it ramps up in pitch and volume until it’s quite distracting. It’s not drastically worse than a conventional fan but it’s certainly no better either and by using that dial you can generally find a spot that balances power with noise.

Dyson Fan Air Multiplier AM01 – Blow Me Down

But, what of that all important buffeting and the cooling performance?

First, a quick bit about how the fan works. It uses an impeller (a fan contained in a tube/conduit) to suck in air through the grilles on the fan’s base then blasts this air through a thin gap that runs round the inside of the big ring. This fast moving air creates an area of low pressure inside the ring which draws in further air from behind (inducement) then as it flows out through the front it further draws more air in (entrainment). Dyson calls this effect air multiplying, though any suggestion it’s actually creating something out of nothing is bunkum; as mentioned above it’s just more efficient than a standard fan thanks to clever aerodynamics. 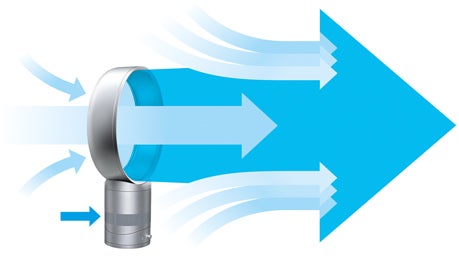 The result is a stream of air that feels continuous rather than chopped up like with a conventional fan. Dyson reckons this buffeting is uncomfortable, but we can’t say it’s something that has ever bothered us in the past, and the Air Multiplier hasn’t in our eyes set a new benchmark for airflow comfort. 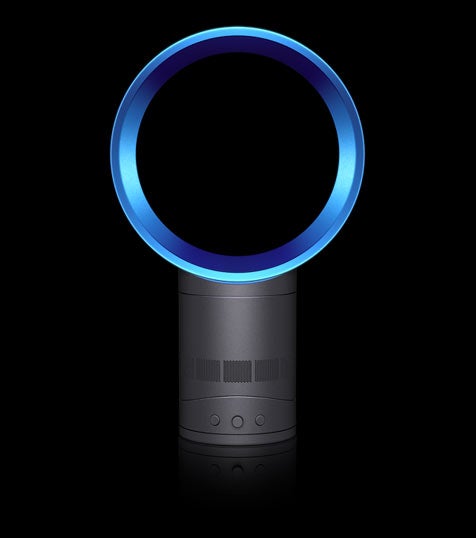 That said, particularly on the lower settings, the constant feeling of a gentle breeze beats the sort of result you get from a conventional fan running at slow speed.

The airflow is also much more directional and with a longer range. Where a normal fan looses its effect from a few feet away, the Air Multiplier still does its thing from metres away. What’s more, step away from being directly in front of the fan and there’s a surprising drop off – it really is like a column of air shooting out the front. There are arguments for and against this highly directional performance, but it does mean you can control air flow that much more easily.

Another advantage of this design is that it means there are no enormous spinning blades that inquisitive fingers could get bashed by. And, you can shoot balloons through the middle!

Sadly while we’re impressed by aspects of the Air Multiplier, it is phenomenally expensive. At around £170 it’s a good five times more expensive than your average desk fan, and we can think of few situations where it really outperforms these fans – balloon firing excepted. A two year warranty is worthy of note, though with it being a desk fan, it’s unlikely to take too much of a beating and thus require repair. That said, it just about holds enough caché through its design and rarity that those with money to burn may find some joy in having one, just because they can.