What is the Dynaudio Emit 5.1?

Like its Danish compatriot, DALI, Dynaudio specialises in high-end, high-performance speaker systems, most of which you’d need to remortgage the house to afford. But with this Emit 5.1-channel surround package, Dynaudio has its sights set on the more affordable end of the market.

Admittedly, north of three grand might not be everyone’s idea of affordable. But according to Dynaudio, this “entry-level” high-end system outguns rival systems in its class, bringing the company’s technical expertise and high-calibre craftsmanship to a lower price point. 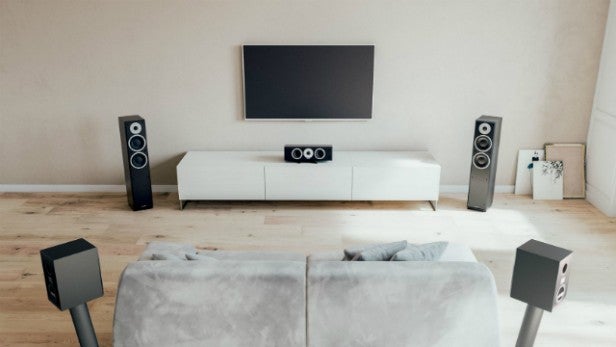 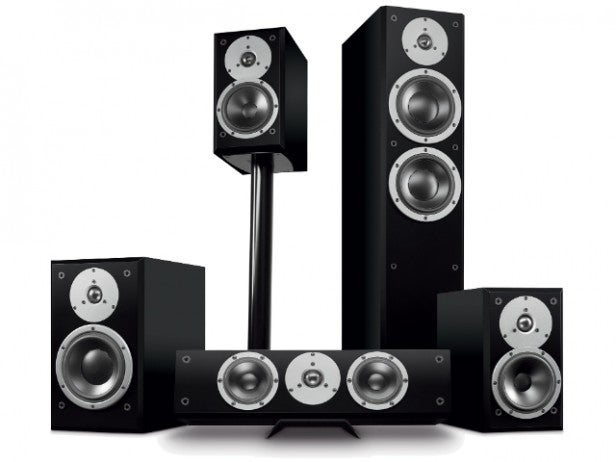 The Emit series doesn’t have its own subwoofer, but Dynaudio reckons the £1395 SUB 600 is a good fit. Snap it up as part of this 5.1 package and Dynaudio will knock it down to £999.

In terms of shape and styling, the M30 plays it safe. It’s a handsome floorstander, no doubt, but in a stark, Scandinavian sort of way. One thing’s for sure, though – it’s stunningly constructed. 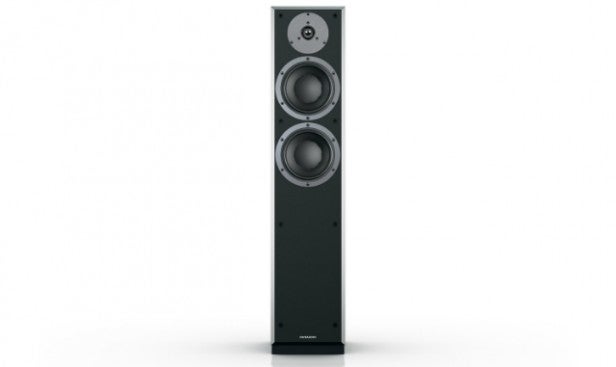 The M30 comes in a choice of white or black satin lacquer, giving it the polished, luxurious feel you’d expect for the money. The 960mm-high cabinet is remarkably solid and heavy, weighing in at a meaty 18kg. But somehow it doesn’t feel imposing, retaining a reasonably small footprint despite its back-breaking bulk.

Yank off the removable grille and you’ll notice some lovely details, such as the chamfered edges and heavy-duty silver driver surrounds studded with industrial-looking screws. A single pair of gold-plated binding posts adorns the back, which means there’s no bi-wiring option – the first sniff of Emit’s entry-level price tag.

The M15C centre is surprisingly compact for a high-end centre speaker. It sits on a heavy-duty metal plinth that angles the speaker upwards, helping to project dialogue into the room. Or you can flip the plinth to make it fire downwards, depending on where you’ve installed it. 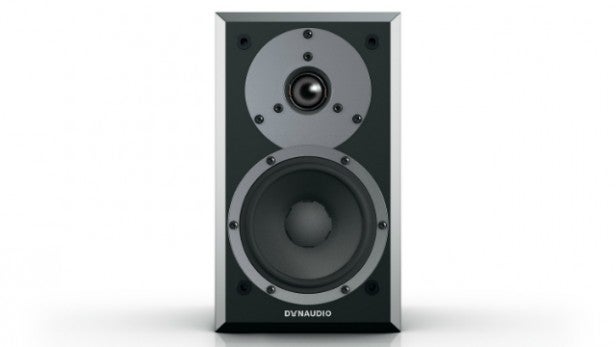 Those hoping to keep clutter to a minimum will love the M10’s compact dimensions – it can be easily perched on shelves or stands. Again, its minimal, understated styling lacks wow-factor, but it’s incredibly well made. Both the M10 and M15C share the M30’s luxurious construction, with the same choice of lacquer finishes and solid, seamless cabinets.

The system’s aesthetic Achilles heel is the SUB 600. My test sample was clad in a cheaper Black Ash wood veneer that didn’t sit quite right with the other speakers. 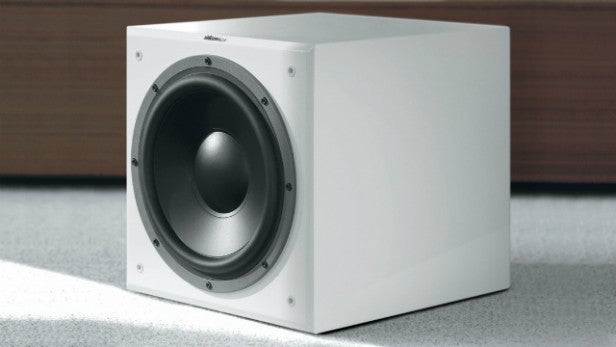 It also comes in a choice of Maple, Cherry, Walnut and Rosewood, as well as Black Piano Lacquer which would be a better match for the speakers. There’s a Gloss White version, too.

But as we all know, it’s what’s on the inside that counts, and the SUB 600 has a lovely personality. The cube-shaped cabinet packs a 12-inch front-firing woofer and a 300W amplifier – the sort of specs that might land you in trouble with the neighbours.

On the back you’ll find RCA LFE and stereo inputs, while RCA outputs allow you to daisy-chain extra subwoofers. Rear controls include gain and crossover frequency dials, a phase-inversion switch and a three-stage high-pass filter switch (Flat, 60Hz and 80Hz).

The M30’s driver line-up is designed to deliver a bigger sound than its relatively compact dimensions would suggest. It boasts dual 17cm magnesium silicate polymer (MSP) woofers – backed by 75mm lightweight aluminium voice coils – and a 28mm soft dome tweeter at the top. 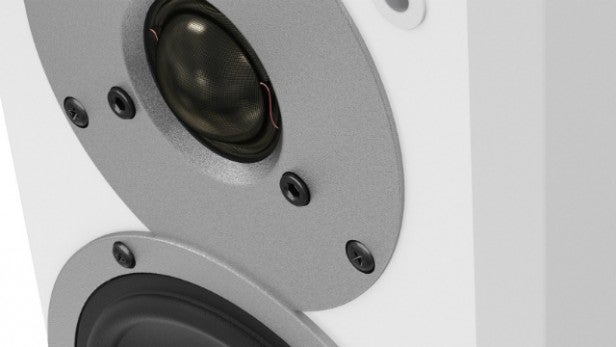 The M15C also features the 28mm soft dome tweeter, but it’s flanked by smaller 11cm MSP woofers. The M10 uses an identical tweeter – a key factor in delivering consistent tonality across the system – but this time it’s joined by a single 14mm MSP woofer.

Play one Blu-ray through the Emit and you’ll want to watch your entire collection. It’s a stunning performer. What jumps out straight away is the system’s wonderful detail reproduction. Silky, precise, natural high frequencies emanate from every speaker, making effects sound believable.

With its neutral tone the Emit steps out of the way and allows you to hear exactly what’s on the disc. It teases out the finest nuances and textures, which pays dividends when viewing Guillermo del Toro’s Crimson Peak. 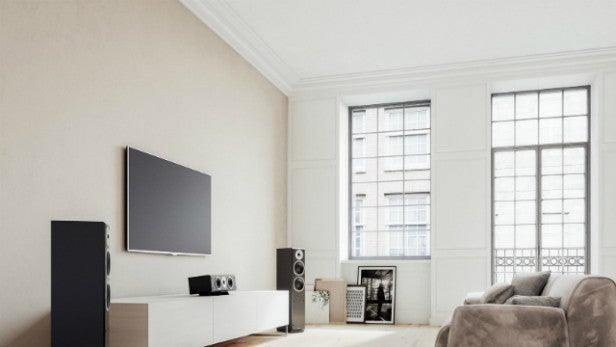 As the camera glides around the huge, creepy mansion, the Dynaudios fill the soundstage with creaking floorboards, ghostly whispers and gurgling pipes. Nothing escapes their attention.

All this finesse and delicacy is utterly captivating, but don’t be fooled – the Emit system is a real powerhouse when it needs to be. Switch to another del Toro flick, Pacific Rim, and it tackles the punishing monster-versus-robot fight scenes with aplomb. 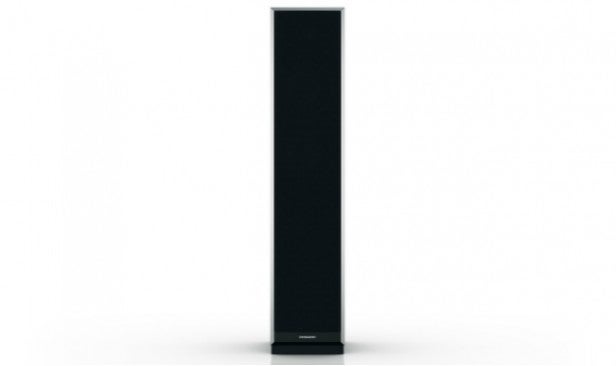 When the Knifehead Kaiju punches the Jaeger in the first battle, the collisions have plenty of vigour. The crashing waves and roaring monsters fill the room, but there isn’t a trace of brashness. Such composure means you can happily watch scenes like this at loud volumes and for long periods without fear of fatigue. That’s what you’re paying all that money for.

The Emit system is also easy to drive, which is important for any entry-level system, as it’s likely to be partnered by a modestly powered AV receiver. With an Onkyo TX-NR818 at the helm, the system created a huge, potent sound without the need to crank the volume unreasonably loud.

The soundstage is clear and cohesive across the entire system – I couldn’t detect any shift in timbre as objects panned around the room. Ambient backdrops are lush and immersive. 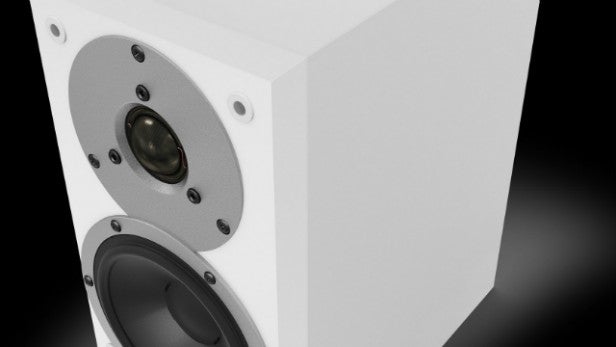 The M10s deliver superb detail, full-bodied mid-range and plenty of bass. To be honest, they’re overqualified for surround duties – they also make accomplished stereo speakers in a proper hi-fi setup.

This excellent surround presence is complemented by rich, expressive dialogue, spearheaded by the superb M15C. Voices have in-the-room presence and luxurious detail – small inflections and sibilance are laid bare.

Although the SUB 600 isn’t an Emit native, it’s a welcome addition that integrates well and delivers bass on a massive scale. It’s phenomenally powerful, agile and well controlled – during Crimson Peak the deep rumble that occurs before a ghost appears sent a visceral shudder through my chest.

But with transient effects such as gunshots and jump shocks it demonstrates remarkable speed and slam. It also has the subtlety to pad out less aggressive sounds like footsteps and voices without sounding heavy-handed.

Unsurprisingly the M30s are a dab hand with stereo music, offering exquisite top-end detail and a clear, full mid-range. Vocals and instruments sound pure and realistic, while their excellent rhythmic sense makes drum beats urgent and exciting. And without any help from the subwoofer the floorstanders generate plenty of bass, lending scale and punch.

Should I buy the Dynaudio Emit 5.1?

If you’re spending £3k on a speaker system, a top-drawer performance is pretty much guaranteed, but the Dynaudio Emit system goes beyond what’s expected.

It’s highly articulate, frighteningly powerful and wonderfully refined. The innate transparency and stunning clarity of every speaker in the system results in one of the most immersive and believable 5.1 soundstages I’ve heard. What’s more, build quality is of the highest order, even though the design might not set your pulse racing.

The only fly in the ointment is the high quality of the competition. The Opticon 5.1 system from fellow Danish company DALI offers a similarly accomplished sound for a slightly cheaper price, although the Dynaudio boasts a more luxurious finish. It’s your call, but either way you’re getting a stunning speaker system.