Dynasty Warriors is a cult classic series that managed to carve a special place in hack-and-slash fans’ hearts in the early 2000s. The franchise follows a tried-and-tested format, letting you take control of one of the heroes from China’s Romance of the Three Kingdoms epic, cracking skulls in a series of sandbox arcade levels.

Originally the DW games were amazing, offering easy-to-understand combat, an amazing number of enemies and a cast of wonderfully over-the-top characters into whose shoes you can jump. Sadly, following the arrival of more complex mechanics and exploration dynamics over the last few years, the last three or four entries have felt a little stagnant and old-school, even for hardcore fans.

Dynasty Warriors 9 is developer Omega Force’s attempt to rectify this and inject new life into the series, by adding Legend of Zelda: Breath of the Wild-like open-world RPG and crafting dynamics to the fast-paced action. On paper this sounds like a dream come true, and at times it is. But technical issues and repetitive mission formats stop it from truly shining, making it a bit of a mixed bag. 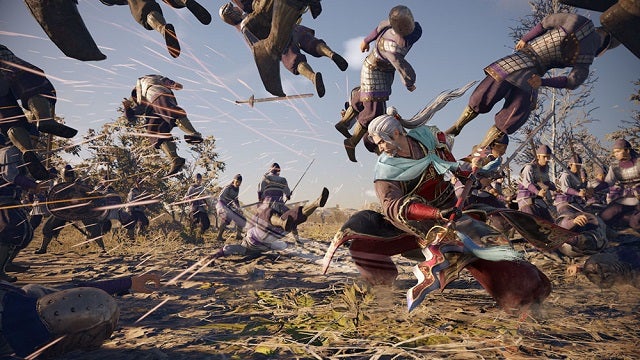 Let’s start with the positive changes. Dynasty Warriors 9 is, in theory, a completely open-world game where every battle in the story takes place on a single, gigantic map. This is a big departure from prior entries, which took a mission format, where every character’s story simply involved playing through a series of 5-8 sandboxed levels based on one of the books’ historical battles.

Character selection has also been reworked to follow the historical timeline of the books. Starting off you can only pick between the three founders of each faction: Sun Jiang, Cao Cao and Liu Bei. From their you’re dropped into the start of the Yellow Turban Rebellion – a key moment in history credited as the beginning of the end for the Han dynasty.

Secondary characters only became playable after I reached the point in history that they actually appeared. This is a small but important change that gives Dynasty Warriors 9’s story modes a sense of continuity and overarching, followable narrative. Past games’ arcade format, that would jump you into differing parts of the Three Kingdoms history in a fairly shambolic, non-linear order, made keeping track of what was going on a close-to-impossible task unless you’d read the books.

In the new format, it’s easier to see exactly what part they played, as you’re forced to follow the historical narrative, even if you change characters mid-story. 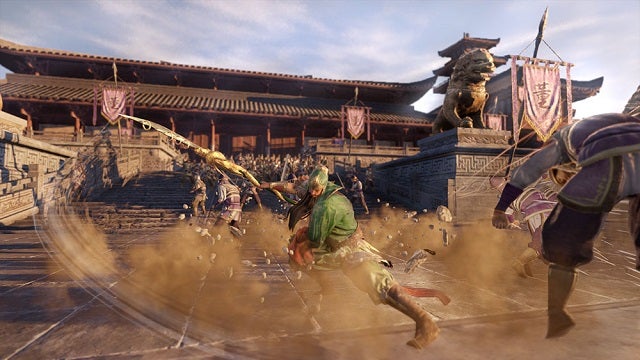 The game’s timeline format also means you can change characters without having to repeat a segment you’ve already conquered – which was a constant annoyance in the previous games.

The combat also remains as fun as ever and has been improved with the addition of more in-depth mechanics. On paper Dynasty Warriors 9’s combat is pretty similar to past titles, tasking you to use a combination of regular and super-powered “Musou” attacks to carve a path through a ridonculous number of enemies. But it’s been given a pleasing layer of depth thanks to the addition of specialist lift,knockdown, stun, special attacks and “reactive” attacks.

The first four are power hits that can be charged to break enemy guards and inflict a number of status effects on your foes. The emphasis on using them to chain together combos is a powerful tool that can be used to keep overpowered enemy generals on the back foot. Fighting against Lu Bu, a famous general who was close to unbeatable in his prime, was a particularly fun experience. Though he had the power to kill me in two hits, I managed to avoid disaster when he appeared during a heated siege by using a panicked combo of lift and stun strikes to buy valuable time to retreat.

The reactive attacks are another nice touch. These are custom attacks that are activated using the Y button (tested on an Xbox One controller). What they do changes depending on the situation you’re in. If an enemy is about to attack, you can use them to launch a counter with a carefully pressed reactive blow. You can also use them to mount powerful execution attacks against enemy officers when their health is low. This feature sounds small, but it adds an element of fluidity to combat I felt was missing from past Dynasty Warriors titles, when coupled with the four power attacks. 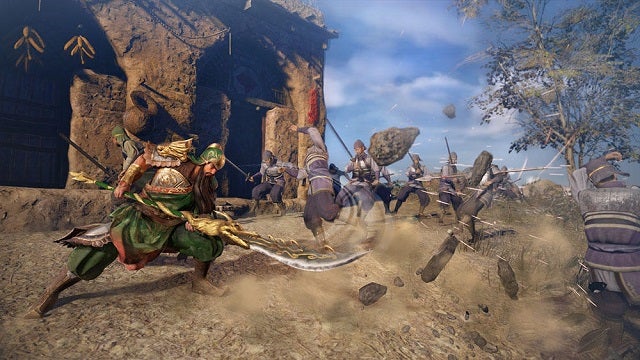 The sheer diversity of characters, each with their own specialisation and attacks, also remains excellent. The game still lets you play as pretty much every historical character you can think of, ranging from powerhouse fighters to famous strategists. If they did anything of note in the books, chances are you’ll be able to play as them in Dynasty Warriors 9.

This combination of factors makes the game a blast to play, and mean fans of the series will definitely get their money’s worth out of Dynasty Warriors 9. For everyone else, however, I’m not sure.

The issue is that all the game’s positive mechanics are still housed in a fairly shallow, repetitive, slightly broken environment. Despite being set in an open world, the game’s narrative and big battles are fairly linear. Each big battle is introduced as a “story mission”. These are highlighted as orange scroll icons on the map. Around them you’ll find a number of secondary missions and requests, which are highlighted white scrolls and speech icons respectively.

Secondary objectives are optional side quests that help your army build morale. They’re generally limited to things like capturing key bases to let ally troops move forward, or rescuing ally commanders from enemy attacks. Side quests are even more basic mini-quests from base captains that never involve anything other than killing a nearby enemy squad, or recapturing supplies.

Picking which bases to capture is fun at first, but after a while you realise the quests never deviate from their tried and tested go here and kill these things, or pick up this item format

The time-sensitive nature of some bigger battles also still means the path to success is fairly rigid. When you start a story mission, the game’s troop movements make straying too far from the beaten path a little tricky as the enemies will become more aggressive and start actively trying to capture your bases. The game also takes still takes all its queues from the Three Kingdoms books and as a result the supposedly open world can feel fairly scripted. Going into one of the later famous battles *no spoilers* the only way to achieve victory without heavy losses was to follow the exact same strategy detailed in the game’s source material, making any illusion of strategy and player choice being important fall apart fairly quickly.

There are frequent quiet periods where you’re free to explore and take on secondary tasks and delve deeper into the game’s crafting and character development mechanics, but again after a few hours, it quickly becomes clear they don’t have the depth you’d expect of a 2018 game.

In Dynasty Warriors 9 you still can’t change each character’s appearance. All you can do is tweak their weapon and basic equipment. The weapons system is pretty shallow, letting you buy or forge new armaments at settlement’s stores and blacksmiths.

The only real variety comes from the gem system, that lets you add special effects to each of your power attacks, or boost their effectiveness and character stat upgrade options. For example, grab a flame gem and add it to the lift segment of your weapon and going forward the attacks will include fire damage. But even with this, outside of the addition of a new fire effect to your attack animation and a minor stat upgrade the changes are largely superfluous and fairly by the books. If you grind enough and have a higher level than your enemy, chances are you’ll win regardless of what equipment you pick.

The same is true of the crafting system. Dynasty Warriors 9 lets you craft specific items using resources by gathering resources from the wilds or animals you’ve hunted in a similar way to other open-world games, like Monster Hunter World. This again sounds great, but the mechanics again lack depth.

The items are freely littered throughout the map and easily collected when rushing between bases and missions without prior forthought. Issues with the AI also all but ruin the hunting segments. In theory the hunting system requires you to use the game’s stealth mechanics to snipe your prey with a bow, or set a trap. But the animal’s AI is so basic you can kill most animals using a Leeroy Jenkins strategy and rushing in sword swinging. As a result it takes too little time to collect enough items to craft the item you’re after, even when playing at high difficulties. 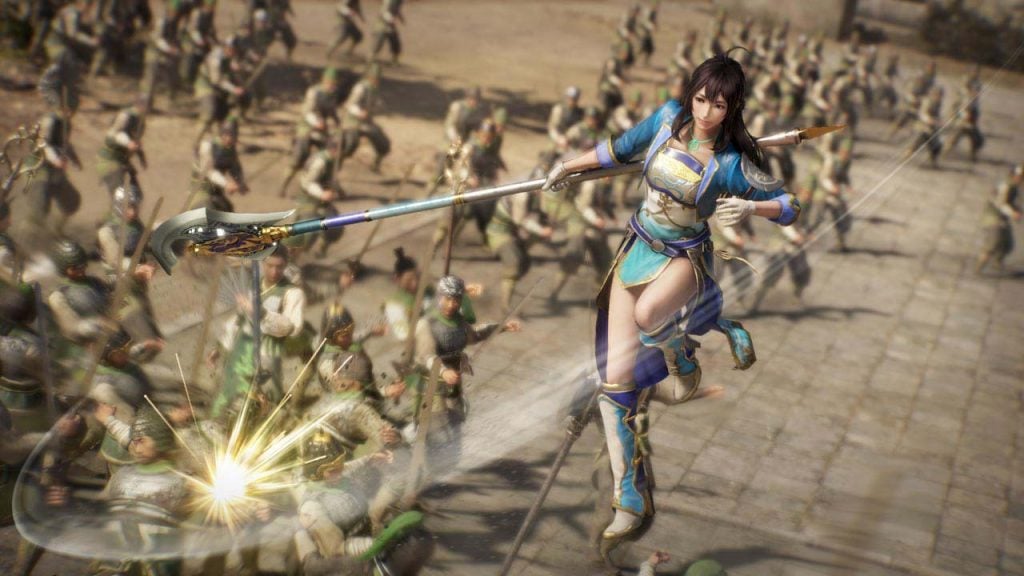 Issues with the game’s dialogue and numerous bugs further hinder any chance of immersion in Dynasty Warriors 9’s world. The English language actors are so ham fisted in their execution of what is already a fairly simplistic script that they make Bruce Campbell performances look like hard hitting theatre.

The PC version I tested is also fundamentally broken. I can forgive odd AI blips on a game that regularly renders 100s of troops at any one time, but the consistent drops in framerate regularly make Dynasty Warriors 9 close to unplayable. Despite having a top end PC with an Eighth Gen i7, GTX 1080 and 16GB RAM, no matter what graphics settings I picked the game would inexplicably start to drop to below 30fps, having started at 60fps, every half hour. I haven’t been able to confirm if the issue also occurs on the console versions, but it’s something any PC gamer should be aware of before parting with their cash. Hopefully a patch fix will appear soon.

Featuring reworked combat and open-world story mechanics, Dynasty Warriors 9 is a definite step in the right direction. But even without the technical issues around its framerate, Dynasty Warriors 9 feels like a fundamentally compromised game that lacks depth. Fans of the franchise will likely be able to see past its shortcomings, but everyone else looking for a hack-and-slash fix would do better to look at one of Omega Force’s other titles, like Berserk and the Band of the Hawk.