It’s not every day that I get exited about something as potentially boring as a docking station, but then, considering the DynaDock is from the maker of the eminently stylish Regza 40ZF355D, it’s hardly surprising. Not only has Toshiba given it stunning looks, but it also has some unique tricks up its sleeve that should make it rather special.


Docking stations in general are an interesting conundrum. They tend to be rather large and quite heavy, and more annoyingly, proprietary to a specific make or even model of laptop. Now there are two good reasons for this: connectivity and bandwidth. The cynic in me thinks a third reason might be so manufacturers can charge more for proprietary products that you have to purchase from them, but to be fair, making a good and versatile universal dock can otherwise be a challenge. 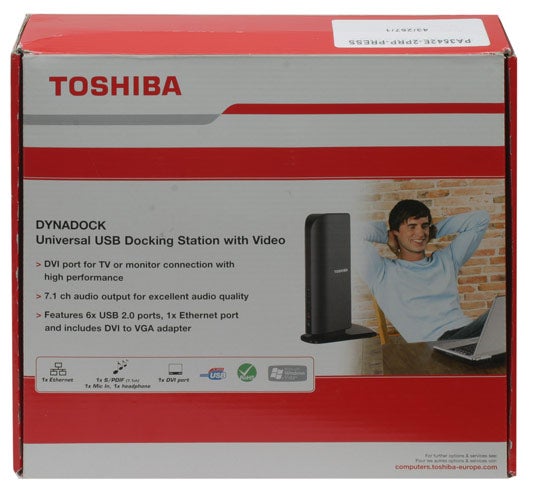 In terms of connectivity, to replicate all the ports on your laptop (and ideally add a few more), a universal dock would normally require you to plug cables into at least some of those ports, somewhat defeating the whole purpose of using a dock in the first place.


There are two versions of Toshiba’s sleek and slim unit available: the VGA and substantially more expensive DVI version (which comes with a VGA adapter). Of course we are reviewing the superior DVI model, which not only offers a digital connection but one that is HDCP enabled to boot. Together with its support for 7.1 virtual audio channels through S/PDIF, this version of the DynaDock ought to be pretty accomplished as a home entertainment extender, theoretically having all the elements in place to handle Blu-ray. In this respect it certainly goes far beyond most, but do keep in mind that you’ll want to run movies at 720p rather than 1080p, as the dock’s maximum supported widescreen resolution at 24-bit is 1,680 x 1,050 (1,600 x 1,200 in 4:3).

Despite all this entertainment oriented functionality, it’s nice to see that Toshiba hasn’t left business customers out in the cold, with the addition of a legacy RS232 serial port for those ancient devices some offices still use. Having gone this far, one might argue for the benefits of a printer port too, but that’s just being greedy. Instead, the DynaDock offers six USB 2 ports (two of which are powered), microphone and headphone connections, and a 10/100Mbit Ethernet port. Frankly, we can’t think of anything more we’d want.


The thing that makes this dock so special is that it achieves all of this, including video, over just a single USB 2 connection. The DynaDock manages this is by using an extraordinary little technology – which frequent TR visitors might already have read about in our Samsung SyncMaster 940UX monitor or the widescreen LG Flatron L206WU reviews – called DisplayLink.

Instead of the DisplayLink chip tranferring the digital data being sent across the USB port to a monitor, in this case it merely sends it to the DVI port, ready to hook up to any display you wish. Which is why calling the DVI DynaDock a port replicator is actually selling it slightly short; not least because it gives any notebook with only analogue out the ability to digitally connect to a DVI (or HDMI)-enabled monitor. Just keep in mind that DisplayLink does not yet support Linux, so to use it with an Asus EeePC you’ll need the XP version.


In terms of looks, Toshiba definitely has another winner on its hands. The DynaDock is designed to stand on its own, rather than forming a support for your laptop like many other docks. And that’s a good thing, as it would be a pity to hide its svelte curves. The DynaDock is available in black, silver and white, but since we prefer the dark side, the black model is the one we’re reviewing.

The unit actually arrived in three parts. First there is the solid and heavy base, made of matte plastic and supported by four rubber feet. Into this slots the port station, which consists of two gunmetal-grey curved sides around a mirror-black centrepiece containing all the ports and indicators, which are sensibly divided. At the front you’ll find a blue LED power indicator and green USB status light, and easy access to two powered USB ports, the headphone and microphone inputs. The rest of the connections are hidden out of sight on the rear of the unit, with an optional metal brace for cable management. Build quality is good, as is spacing around the ports.


Setup is relatively complicated, requiring the installation of multiple drivers, but the user manual on the included CD is clear and extensive. Our sample came with a notice that optimal functionality under Vista requires a (181MB) driver download, rather than the version on the included CDs, but you’ll probably want to check for new drivers anyway, since Toshiba has promised quarterly updates. The easiest place to get them is www.dynadock.com.


In use, the DynaDock DVI was initially quite quirky, often requiring a few restarts before working properly (or at all), and frequently suffering little delays. In one case the sound would randomly stop working. Also, the option for switching between ‘mirrored’ and ‘extended’ modes is not explained in the manual – a major oversight for novice users. However, once running properly, the DynaDock worked mostly as stated. 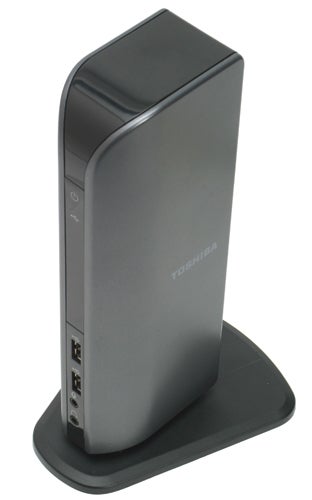 Its standout feature is that Toshiba’s dock lets you connect digitally to an extra monitor using almost any USB-enabled computer, thus, if your notebook only has D-SUB output, you can essentially get a digital display on your monitor. You can also have up to three screens on your desk, (your laptop’s built-in screen, one via its video output and one over the DynaDock’s DVI) and view different applications on each display or one stretched across all three.


The only major disappointment was its entertainment performance. Despite Toshiba claiming its dock supports ‘high resolution video output’ over HDCP-enabled DVI and 5.1 (7.1 virtual) digital sound, its handling of even 720p video was quite jerky and suffered bad judder, especially during camera pans. So high definition entertainment is watchable, but it’s by no means the pleasant experience I was – perhaps naively – hoping for.


For everything but entertainment, the DynaDock DVI does an adequate job – once you get it to work. It is slightly quirky, though hopefully updated drivers will make it easier to recommend. Meanwhile, under XP and Vista it lets you connect digitally to most monitors, and offers all the other connectivity you could want over just a single USB 2 port. If you’re not a Linux user, Toshiba’s slightly flawed but innovative and stylish dock may meet your needs.