Dualit Stand Mixer: At a Glance

The Dualit 88013 Stand Mixer is the British brand’s entry into a market dominated by rivals KitchenAid and Kenwood. It’s a high-quality mixer that handles all of your whipping, whisking, kneading and, of course, mixing needs.

At £300, the Dualit Stand Mixer isn’t cheap, but it is competitively priced compared to popular rivals. But this accessible price doesn’t come at the cost of performance and it’s a great tool for taking the elbow grease out of making cakes, bread, pastries, puddings and much more. 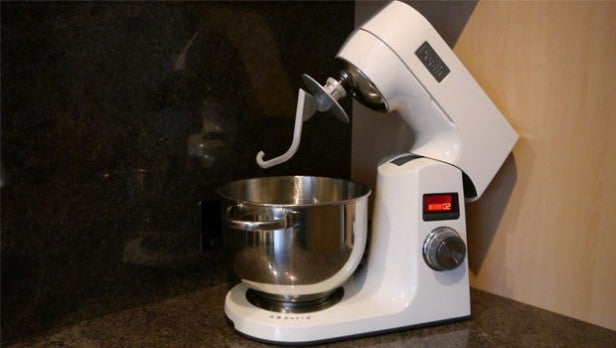 This isn’t a style icon. The Dualit Stand Mixer’s gloss white metal body looks utilitarian — not in an unattractive way, just an unassuming way. It looks like a tool rather than ‘feature’ that will draw the eye in your kitchen. This neutral colour should fit in with any kitchen décor, but a choice of colours and finishes would add some verve.

Build quality cannot be faulted, though. The Dualit Stand Mixer feels like a solid, hardwearing mixer that will happily grace your kitchen for years. As with any stand mixer though, it is very big. It’s too large to fit comfortably in most kitchen cupboards and takes up a considerable area of open counter space. It’s heavy, too — 8.8kg in total — so it’s just as well it has carry handles in the base.

The mixer’s size and weight does have some benefits, however. It remains stable and steady even when cranked up to high speeds when kneading dough. It’s a damn powerful machine, too. Its 1000W motor handles heavy dough and thick cake batter ease and the 12 speed settings ranging from a careful, elegant whip to a knee-trembling beating, provide plenty of fine control. 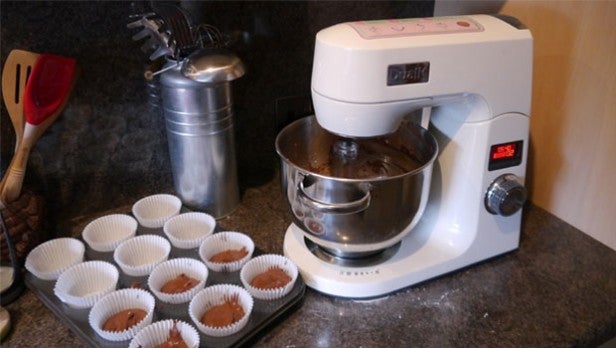 The Dualit Stand Mixer comes boxed with four interchangeable heads. With a whisk (ideal for macaroons) partnering the traditional beater (cake mixes) and dough hook (bread). A plastic spatula beater with a rubber edge makes it easier to reach to the edges and depths of the mixing bowl, though this is the weakest, least robust of the tools provided.

With a 4.8 litre bowl capacity, Dualit’s mixer is more than enough for even the largest of baking sessions. One addition we would have liked to have seen, however, is measurement markings within the mixing bowl. 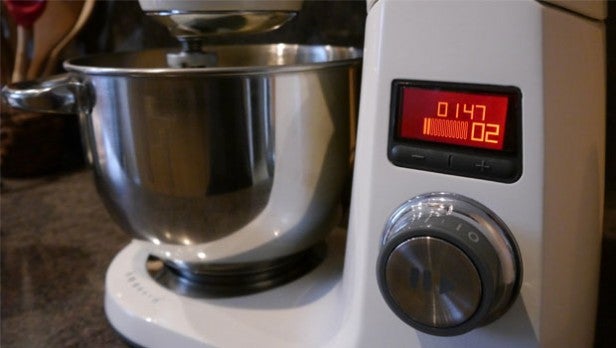 Dualit Stand Mixer: What is it like to use?

Very easy — it’s one of the Dualit’s most endearing qualities. Unlike some of its leading rivals, it is not cluttered by an array of manual knobs, dials and sliders. Instead it has simple, modern controls – a single digital dial and an integrated LED display.

This display shows the power setting, timings and removes much of the guesswork from following recipes. It also saves you having to set timing reminders on your oven or smartphone. We’d love to see more stand mixers use one.

The mixer’s instant pause feature is super useful, too. It’s ideal for quickly checking the consistency of a mix. Simply hitting the large pause button quickly cuts the power and lets you dive into the bowl. The mixer head can even be released and lifted with a single hand, which is useful when you have your hands full.

Power and ease of use, however, are slightly redundant if the mixing isn’t up to scratch. Fortunately – for the most part – the Dualit mixer clears this hurdle. Using the stainless steel whisk attachment to make macaroons, we quickly had a smooth, fluffy mixture with the desired stiff peaks. Making both a large white loaf, and a focaccia with the dough hook we found the mixer perfectly kneaded and folded the dough to desired levels. 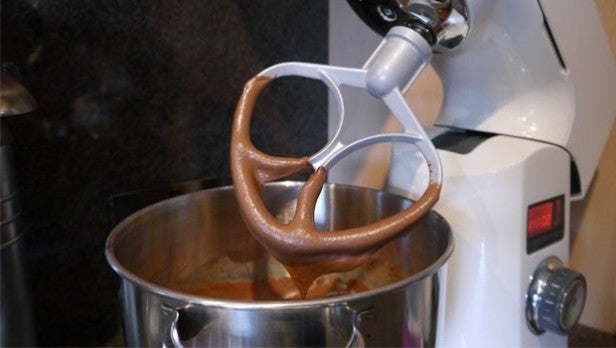 Cake mixes and buttercreams, however, were not without minor issues. The die-cast beater attachment didn’t reach the contents at the base of the bowl on more than one occasion. This left a small patch of unmixed ingredients beneath the otherwise perfectly mixed and whipped batter. Switching to the spatula beater helped solve this minor gripe, but this plastic attachment is less adept at cutting through thicker mixes.

Another design failing that troubles the Dualit Stand Mixer is its spring loaded, mixing head mount. Although faultless in its use during our time with the device, the spring quickly becomes marred with cake mix and dough. Given the small spaces it is nearly impossible to clean.

This is the only part of the mixer troubled by cleaning woes, though. The metal body benefits from a easy, wipe clean surface and the mixer’s bowl and bevy of attachments are all dishwasher safe. A plastic splatter guard comes in handy, but still struggles with the addition of icing sugar. 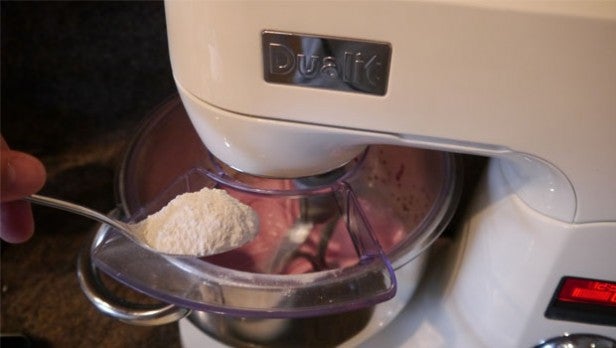 Stability is key to thorough, splatter-free mixing, and here the Dualit offering has no troubles. It does, however, leave you worried. The mixing bowl’s locking mechanism, although secure, features no audible or physical click when locked. The result was much checking and double checking the bowl was safe.

Despite a few locking irritations, the Dualit’s mixing bowl has an added benefit over its rivals: two handles. This helps spread the weight of mixtures — a small but important addition if you struggle with heavier mixtures.

Although the one-metre power cord can be stored neatly with in the mixer’s body, this is not a seamless or elegant process. Unlike on most vacuum cleaners, which feature an auto recoil button for cable storage, the Dualit Stand Mixer requires you to physically push the cable back into the frame. 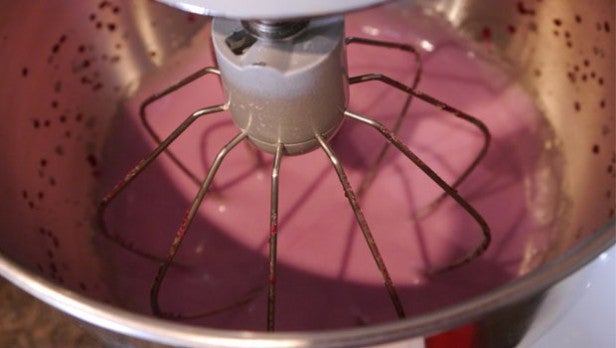 Should I buy the Dualit Stand Mixer?

If you’re a regular baker with a broad repertoire of cakes, breads and baked goods, you could do much worse than the Dualit Stand Mixer. It doesn’t do anything you can’t do by hand, but it removes much of the effort and cuts down the time. It’s also easier to use than some stand mixers, making it a good choice if you’re intimidated by all the options on some models.

This isn’t the last word in stand mixers, though. It looks a little dull and we did encounter small problems mixing some recipes. Also. size and cost mean the casual baker would likely be better off with a good quality hand mixer such as the Kenwood kMix HM808.

For more serious bakers, though, it’s a very good value option that’s easy to use. Its over £100 cheaper than the KitchenAid alternative. What’s more, with a five-year warranty on the motor and a two-year guarantee on all other parts, the mixer will offer piece of mind for years to come.

An effective, easy to use and good value stand mixer, though we wish it looked it looked a little more exciting.

Next, head to our Home Appliances section for all the latest reviews of kitchen gadgets, large appliances and smart home gadgets