Of course the main reason you would give up the greater functionality of a NAS to opt for the 5D is speed. Removing the bottleneck of Gigabit Ethernet releases the potential for USB 3.0 and Thunderbolt and it is here the 5D delivers in spades. 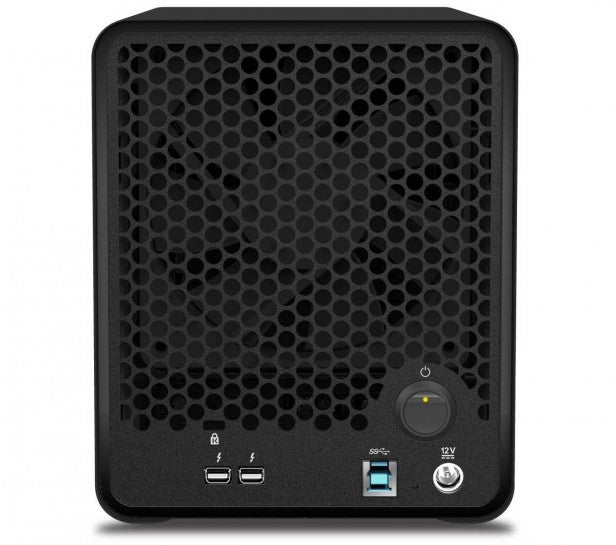 Switching to Thunderbolt (and Mac) initially delivered results that were just 10 per cent faster, which we can only put down to hitting the limits of the Barracuda drives themselves. To overcome this we switched to SSDs – something that is more fiddly as their 2.5-inch form factor requires a 3.5-inch adaptor tray to fit and Drobo doesn’t provide them. 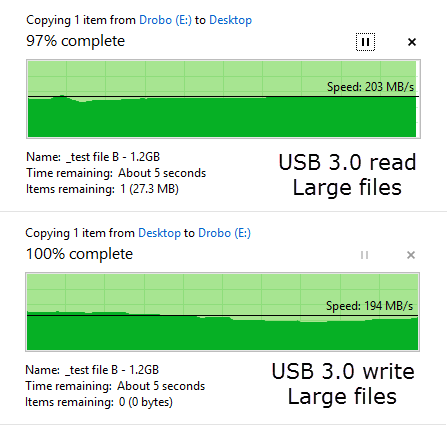 Despite this performance then leapt as the Samsung 840 EVO equipped 5D reached read and write speeds of 362.1MBps (288.7Mbps) and 328.7MBps (2629.6Mbps) for large files and 202.1MBps (1616.8Mbps) and 162.3MBps (1298.4Mbps) for the read and write of small files. These are exceptional figures and while a standard external SSD may beat them it is important to remember they are attained with BeyondRAID working in the background.

It is worth noting that due to the different file systems (NTFS on Windows, HFS on Mac) you cannot use the 5D between both Mac and PC, you have to pick one of the other. That said, comments sections across the internet suggest users tend to strongly favour one or the other! 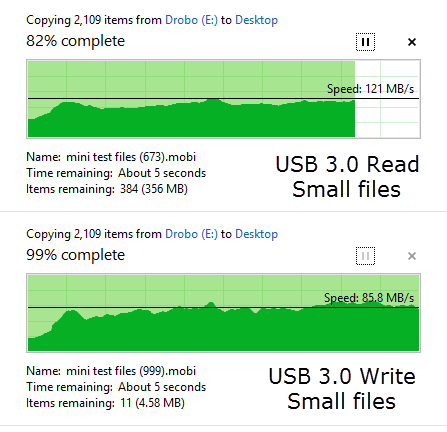 One area where we were disappointed, however, was the mSATA ‘Accelerator Bay’. Fitting an Intel mSATA 525 SSD made virtually no difference to any of our scores, albeit some response times to the handling of small files over USB 3.0. As such we’d suggest putting the funds towards the best drives you can get for the five main bays.

Where the 5D is back on form is noise. At 25 decibels unpopulated the 5D is largely undetectable. This can change dramatically depending on the storage drives you fit (5x 3TB Seagate Barracudas lifted it to an always audible 36db) but Drobo can’t legislate for that. This is an important improvement with the 5D as previous Drobo products have undone some of their good work with excessive noise. 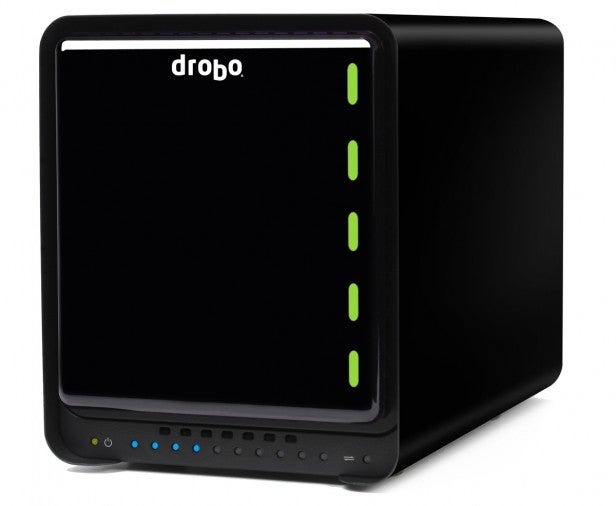 Should I buy the Drobo 5D?

If capacity and speed far outweigh your need to be able to access your data anywhere then the 5D comes highly recommended. Glitches aside it was a doddle to setup and it isn’t as complicated to use as a NAS while providing the same expandability and security for your data. Noise is also greatly reduced (if not quite to Synology whisper-quiet levels) and unleashing the performance over Thunderbolt for Mac owners is particularly impressive.

That said the 5D isn’t perfect. We are disappointed that there is no Thunderbolt support in Windows, a bizarre omission to still have in 2014, and with a £475 asking price unpopulated it is more expensive than more capable NAS like the Synology DS414 which supports Link Aggregation to greatly improve performance. The build quality of the 5D goes some way to consoling us about the size of this outlay, but not entirely.

The Drobo 5D is a fast, quiet and highly intuitive DAS constructed from top-notch materials and its USB 3.0 and Thunderbolt connectivity far outstrip Gigabit Ethernet. That said, limiting Thunderbolt access to Mac OS is a significant flaw and the price tag is higher than you would expect to pay for a high quality four-bay NAS. As such we find the 5D to be an even more niche product than we expected, but it is a good one.