What is the Drobo 5D?

The 5D is Drobo’s high performance, five bay DAS targeted at prosumers. DAS (Direct-attached storage) may be a term less familiar to you than NAS (Network-attached storage) but it simply means the device is designed to connect directly to your computer rather than over a network. Why would anyone buy the 5D over a traditional NAS? In a word: speed. 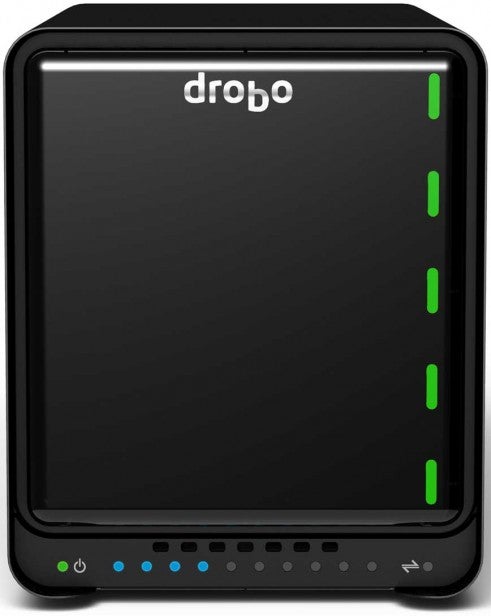 Separating the 5D from its NAS equivalent, the ‘5N’, is virtually impossible from most angles and this is entirely a good thing. The 5D may look like a typical NAS, but at 262 x 185 x 150mm and 3.8Kg unpopulated it is smaller and lighter than many four bay rivals. It is also better built. The 5D has a brushed metal chassis, unlike the prevalent plastics seen elsewhere, and it feels virtually bomb-proof as a result.

The 5D lacks an LCD status panel, but it has an array of smart status lights. Green, yellow and red LEDs indicate each drive’s health plus there’s a separate LED for the power mode and temperature. Meanwhile a series of blue horizontal lights show the available storage capacity. When the 5D boots it is something of a light show, but in practice they are extremely useful. 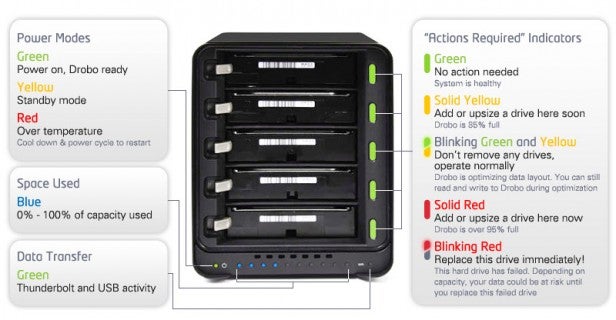 Also worthy of attention is the 5D’s smart functionality. It is the first DAS we’ve seen to come with both USB 3.0 and Thunderbolt connectivity and there are two of the latter to allow up to six 5Ds to be daisy-chained together. The snag is the 5D only supports Thunderbolt using Mac OS X. This is a shame as Thunderbolt is starting to find its way onto a number of PC motherboards and is part of our test rig.

On the upside the 5D can hold an mSATA SSD without compromising any of its five HDD bays. This is courtesy of an ‘Accelerator Bay’ on the bottom of the 5D and Drobo claims this will be intelligently allocated to store frequently accessed files. The theory is this combination means the best of both worlds: the speed of SSD with the capacity of HDDs. 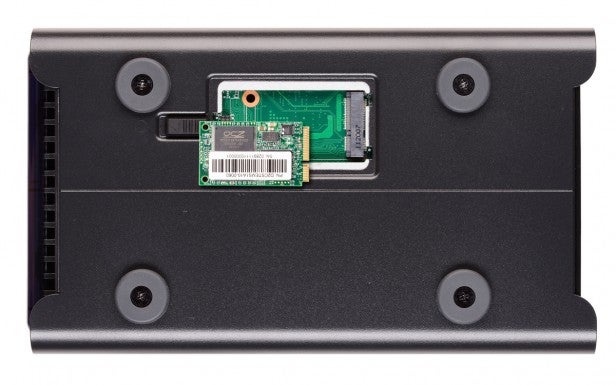 Like Netgear’s X-RAID and Synology Hybrid RAID, Drobo has ‘Beyond RAID’ – a proprietary RAID array that allows a volume to be dynamically enlarged using drives of any size. While both Asus and Western Digital still don’t offer a rival for their storage products we’d argue it is a must have for any serious DAS or NAS contender these days.

Last but not least Drobo fits the 5D with a small battery that protects data in the event of a power outage. The battery keeps the 5D operational for long enough to finish writing any data in memory to the drives and recharges itself automatically when the 5D is in normal operation. It is a clever feature and one we’d like to see more widely implemented by rivals. 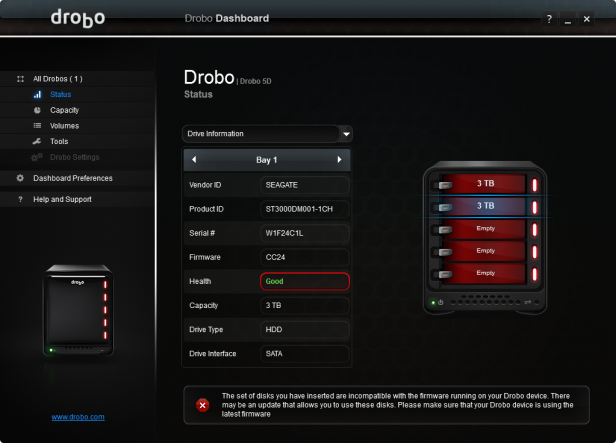 In principle setting up the 5D is a breeze. Its bays are not only tool-less, but tray-less so drives simply slide in and lock in place while BeyondRAID automatically configures them to maximise capacity with built in redundancy. Setup times are extremely quick with the 5D configuring five 3TB Barracuda drives in under thirty minutes.

The reason we say ‘in principle’ though is because it took several attempts to get our 5D to recognise the drives. Ironically they were supplied to us by Drobo, but first required a firmware update to identify them and once identified they were declared to be incompatible (below). It took several restarts before they finally were identified. 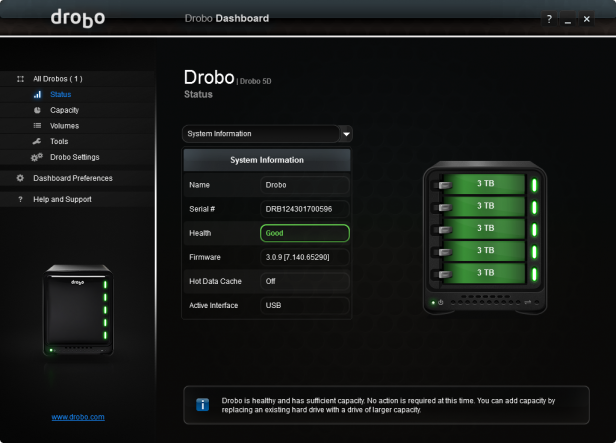 Searching online suggests this was a rare occurrence so we’re willing to give Drobo the benefit of the doubt, but it is worth checking your drives are on the company’s recommended list.

The good news is from this point onwards the experience couldn’t have been more user friendly. The user goes to drobo.com/start, picks their product, downloads the clear and concise Drobo dashboard and the setup wizard does the rest formatting the drives and assigning them with a drive letter. From there you’re good to go. Arguably it may have been nice to offer a browser-based dashboard, but as a local storage product this isn’t really necessary.