Opening a game engine for the first time can make you feel like you’re in a sweaty-palmed nightmare. But Dreams isn’t like that – not only is diving into the game engine and learning how to create stuff fun, you’ll also never feel lost in the navigation and controls. Moreover, it gives you access to a bunch of minigames that you can’t find anywhere else.

You may know Media Molecule for its previous creation, Little Big Planet, the cutesy platformer that partly relies on user-generated content. The developers have long been invested in bringing game-building tools to the masses – including all of us who are too impatient to learn Unity. Now, the team has really put that philosophy into action by delivering Dreams.

Dreams is a game engine and social network, which is sort of like the offspring of YouTube and Unity. Inside the game, content is divided into Dream Surfing and Dream Shaping. The first category lets you peruse other people’s creations and the latter allows you to go crazy and build your own stuff.

In the wrong hands, this title could have been a messy and confusing concept, but Media Molecule has nailed both the intro and the UI in Dreams. Bright scribbles and friendly characters guide you through your initial forays into the Dreamiverse before handing over the creative reins. There’s very little chance of getting lost. 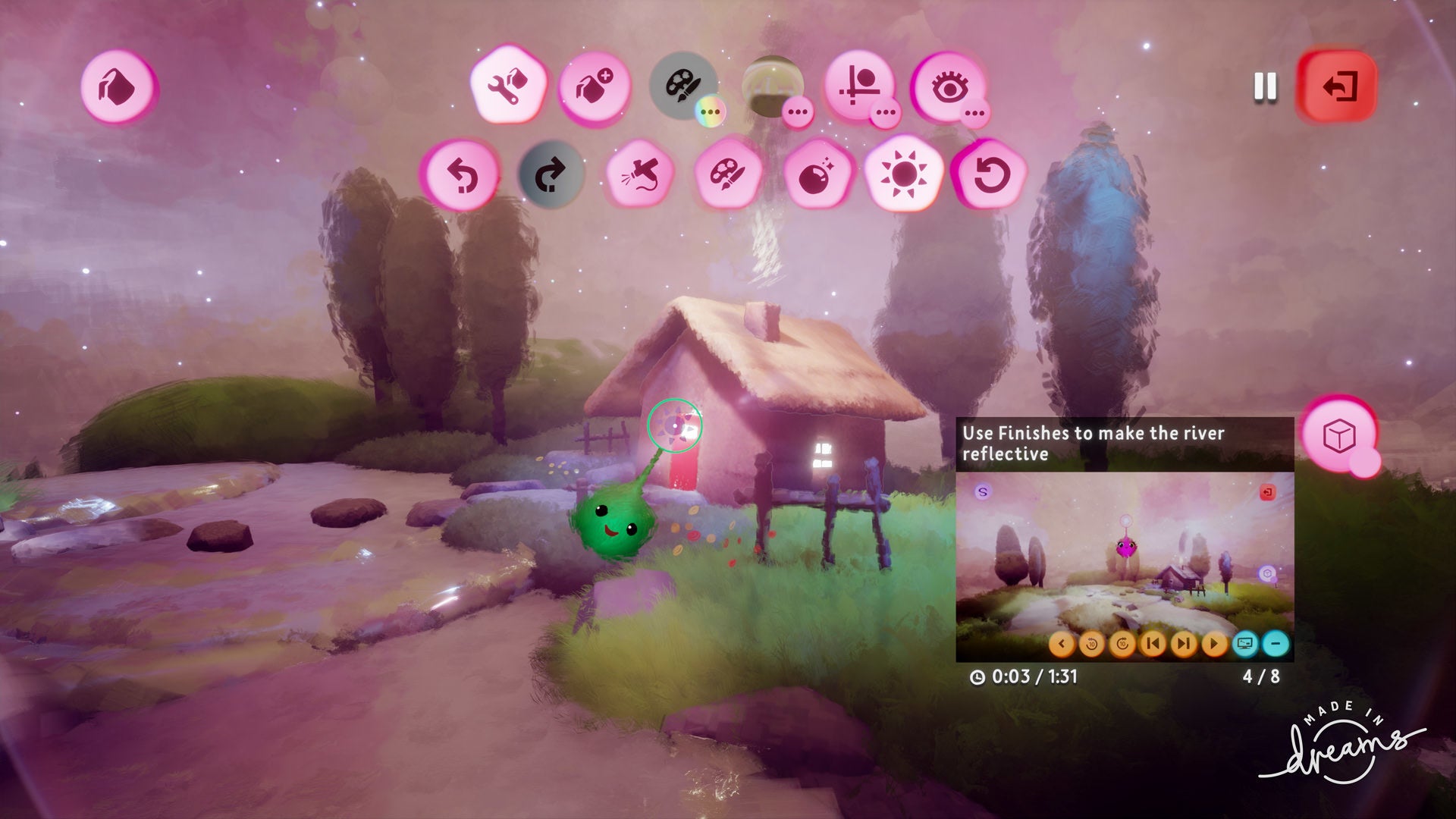 Once you’re past the vibrant intro, you’re given a nudge towards Dream Shaping. This is the game-engine part of Dreams that draws some of its genes from Unity. It’s a lot simpler than that software, but you’ll still need to watch a few tutorials before you begin making the next Stardew Valley.

Luckily, Media Molecule has provided a bountiful amount of lessons in the workshop section. The concept of tutorials might sound like a snore-fest, but these snappily narrated videos and follow-along sessions are genuinely entertaining – and that’s a real achievement.

By comparison, there’s a sea of Unity tutorials online but it can still be difficult to find one that’s both easy to follow and works well with the latest version of the software.

Once you’re rolling in Dreams it’s amazing how quickly you can pull something together. After only a few hours you can create a simple platformer, inputting your own design, characters and music. You’re also not limited to games, as you can create animation or even build a lushly detailed scene with the paint tools just for other Dreamers to oogle at. You can even borrow creations such as models and music from other Dreamers, giving them credit in your own levels so the philosphy of sharing this space with others is never lost. 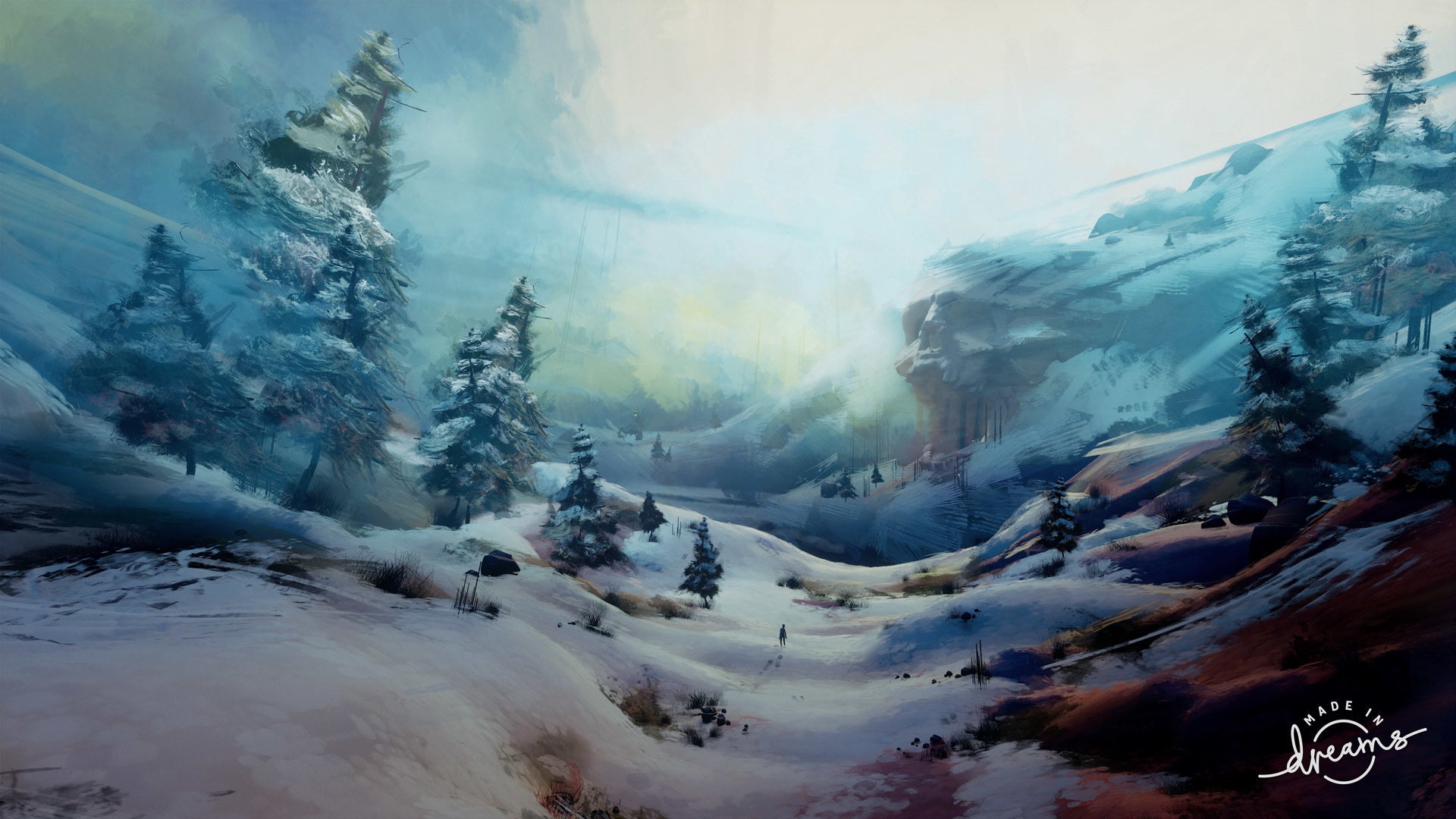 All of these tools allow you to be as lazy or as detailed as you like. Take the music-building option – you can create your own instruments and compose a new tune if you’re so inclined. But for those of us with the musical talent of a rusty spoon, there are plenty of ready-made sound effects and complementary melodies that you can use to build up a soundscape. Similarly, there are ready-built landscapes and characters for you to plonk into your own game.

Having all these tools in one place also means that features play nicely together. Because everything is built within the same engine there’s less chance that a rogue piece of code is going to break your physics.

The only significant downside to creating anything in Dreams is the size limitations, as there are restrictions on how much you can put into a scene – but this can be managed by building linked scenes in most cases.

All of this is just one half of Dreams. The other half is the social side, and it’s a bit of a jungle out there. 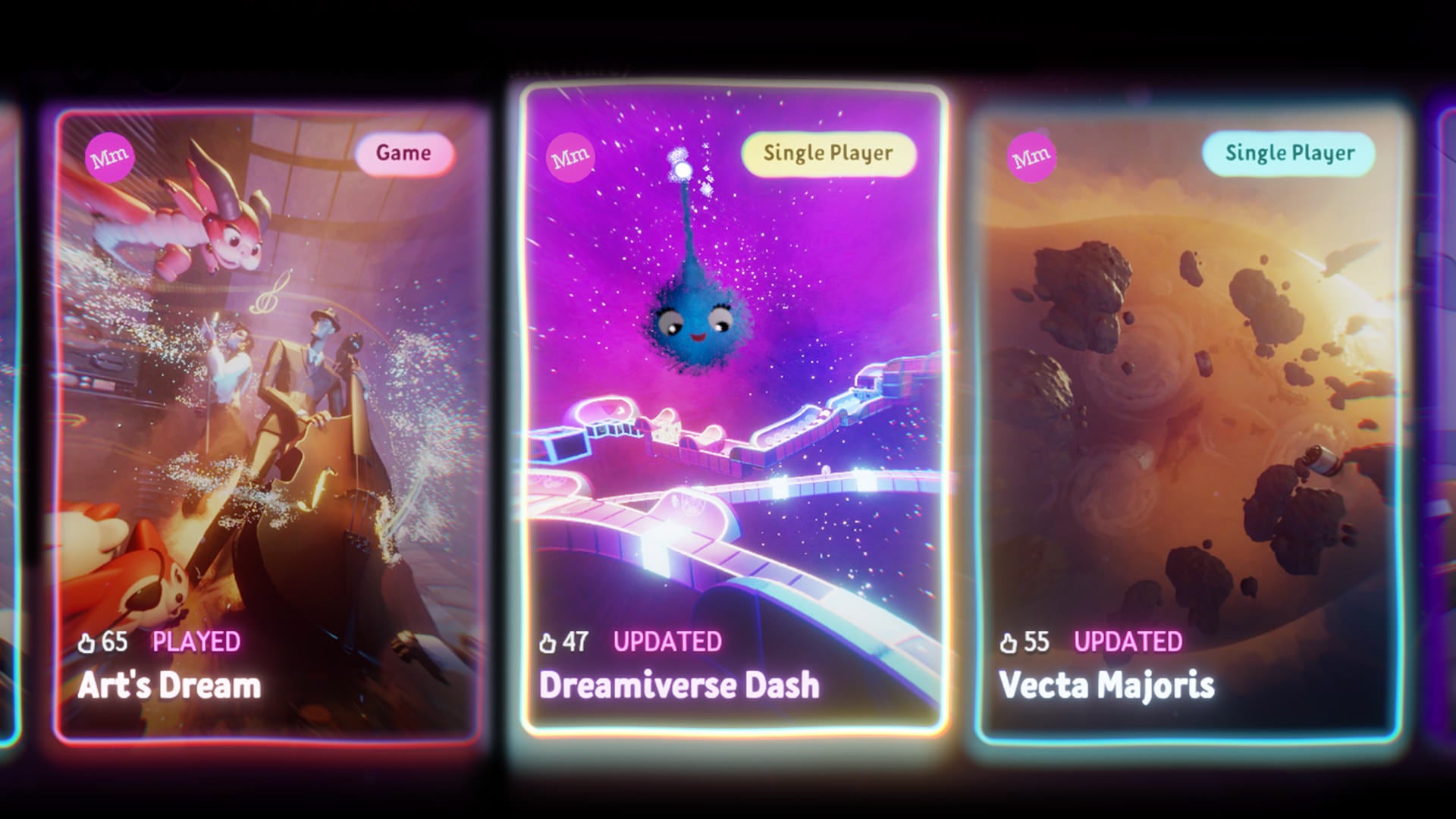 Dream Surfing gives you access to other people’s creations, which range from assets like music tracks and props to full-blown games. Media Molecule has actually created a playable Dream of its own to show off the versatility of its game-building engine. Called “Art’s Dream,” the two-hour adventure follows a down-on-his-luck musician working through some personal issues. It’s a sweet little tale that transforms from platformer into point-and-click adventure, and later an arcade-style shooter.

Of course, not everything is of the same standard. If you switch on “Auto-Surfing” and trawl through random creations, you’ll probably stumble across a lot of rough-around-the-edges first-attempts. It’s also worth pointing out that the comments section here feels like a hot mess – because of the string-shaped layout it’s not always clear who’s replying to who or what they’re even talking about.

But there is some joy to be had in stumbling across things completely randomly in the world of Dream Surfing. It harks back to the much messier days of the internet, where everything felt less tidy and curated. Besides, anyone who wants to walk a more conventional path can browse popular games via tags, suggestions and top-rated creations.

Media Molecule is banking on this social side taking off – after all, if no-one creates games there’s going to be a big gaping content hole in the package. Thanks to the six-month early access period there are currently loads of creations to enjoy, but it’s too early to say whether or not good-quality user content will explode or dwindle in the coming months. 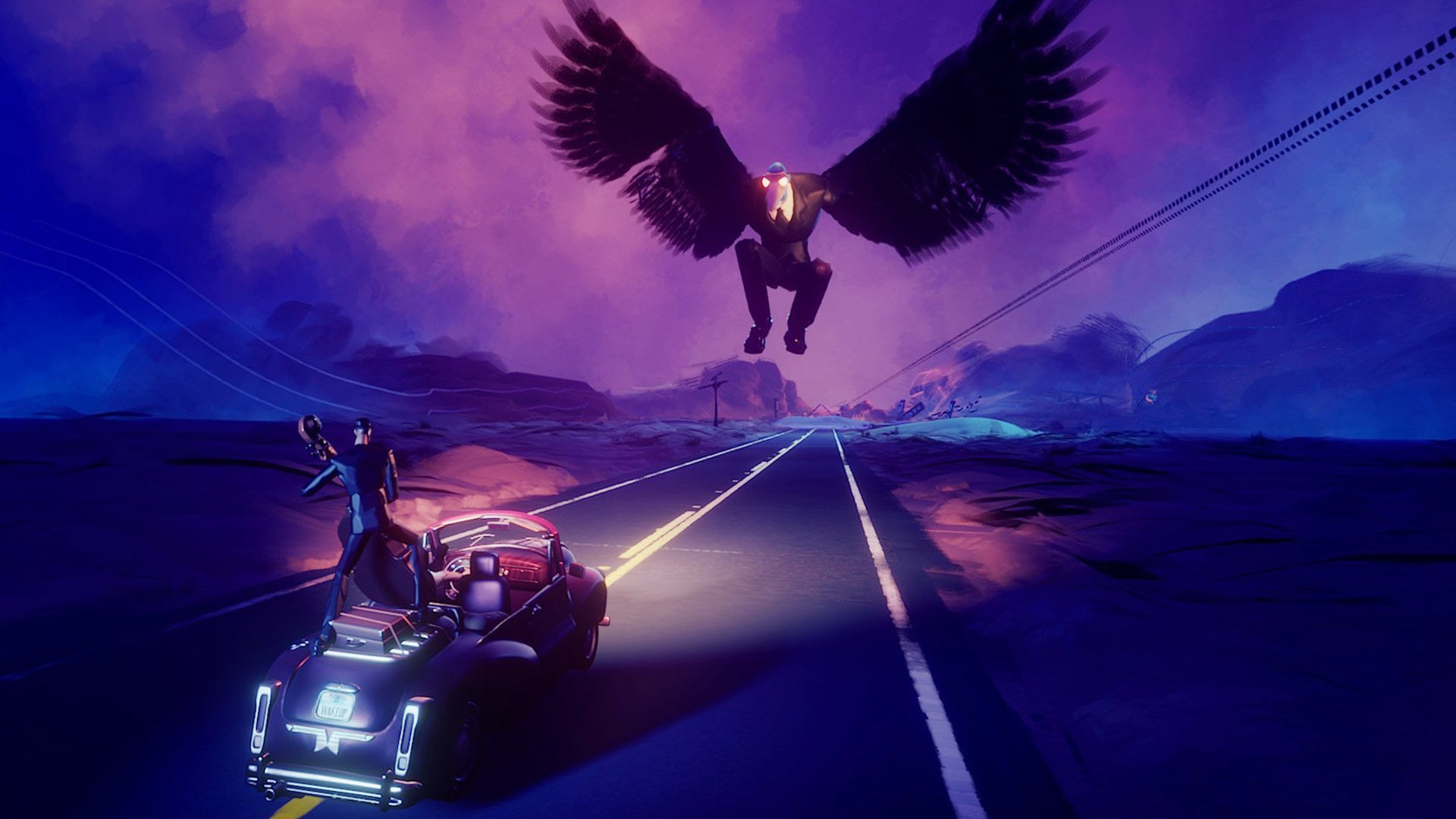 Regardless, you can bet that the algorithm and interface will change over time, as Media Molecule continues to tweak and finesse this section. The developers have also committed to developing the Dream Shaping platform, promising to deliver game-building options for VR and multiplayer online modes.

There’s one criticism that has repeatedly reared its head in discussion about Dreams, which is related to the controls. You navigate the world via your Imp, a googly-eyed cursor that can manipulate objects and possess characters – but this little dude is controlled via motion sensors in your DualShock, which can be hard to get to grips with. There is an option to turn this off, but that makes it much more laborious to navigate everything.

I’m torn on whether or not this is a good thing – Media Molecule has managed to cram in lots of handy shortcuts thanks to the reliance on motion sensors, but it seems a shame that movement is optimised in such a way that people with motor difficulties might struggle. Although I will say I got over the quirks of motion control after a few hours. 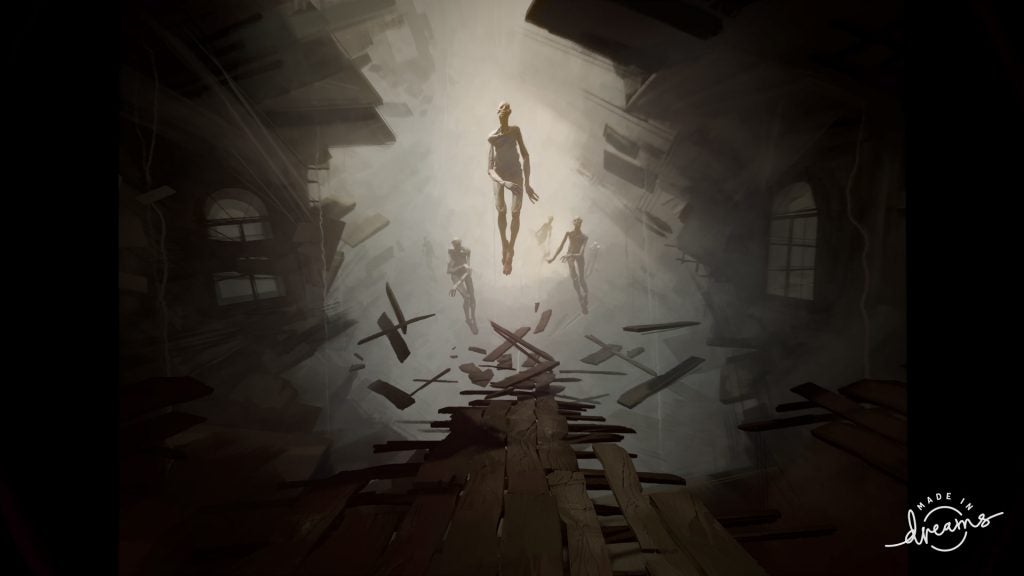 It’s kind of nuts that Sony decided to give Dreams the thumbs-up. If the title is a big hit then it could become an influential portal to other games and an easy creative outlet for individuals who don’t want to master Unity or Blender.

There’s even talk of monetisation and the possibility that user-made games could one day earn creators a little pocket money.

Should you buy Dreams?

The game-building element of Dreams is brilliant – you’ll have to trawl through a few tutorials but they’re all really fun and it’s so satisfying when you finally build something of your own. The social side feels less developed, but it may grow quickly in the coming months.

As such, anyone who’s buying it for access to other users’ games might want to wait until the collection has expanded even further – but if you’re looking to dive into some fun and basic game building, then grabbing it now will let you meet other creatives and allow you to learn alongside them as the platform (hopefully) blossoms.