In closed beta for PC

If the name didn’t give it away already, Dreadnought is about terrifyingly large ships making even larger explosions. The stars of the show in the five-versus-five battleship arena are titanic, super-sized cruisers designed to fulfil a very different fantasy to the likes of Elite: Dangerous. Dreadnought asks its players, ‘Why be an X-wing, when you could be a star destroyer?’

It’s a tempting proposition, and I’ve plunged into the game’s closed beta to see if the reality lives up to the fantasy.

The rules of engagement in Dreadnought are simple: each player takes charge of a single vessel with the objective of eliminating the opposing fleet. At the moment the game features two modes: Deathmatch and Last Man Standing. In the former the first team to reach 20 kills is the winner; in the latter every player only receives a single life. Action is conducted in third person, with players able to gaze upon their ships as they unleash hell.

Five classes of ship are available. The titular Dreadnought is the slowest, largest, and fiercest. These titans possess incredible firepower but lack manoeuvrability. Next is the Destroyer, lighter on armaments, but quicker and often hardier than its larger counterparts. For those who like to keep the enemy at arm’s length, the Artillery Cruiser is Dreadnought’s equivalent of a sniper. These ships can fire great distances but have almost no short-range capabilities. Next comes the Tactical Cruiser, which is the game’s only healing class. These can conduct remote repairs and help any fleet sustain massive damage and keep on ticking. Last but not least is the Corvette, a high-powered gunship that’s fast and deadly, but can be swatted like a fly if caught in a barrage. 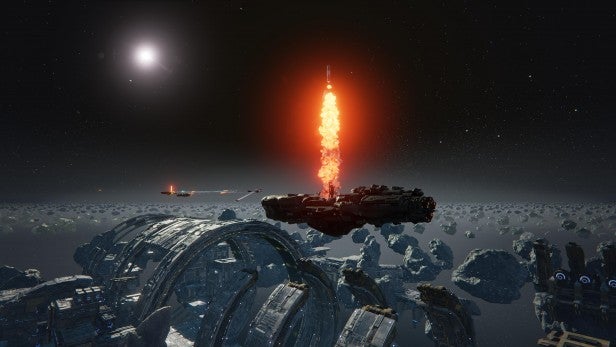 Each class plays very differently, as you would expect in any class-based shooter, but the most alien in feel is undoubtedly the Dreadnought. These beasts move through space as if it were tar-thick, and have an array of weapons, in addition to activated abilities such as nukes, anti-missile lasers, and plasma rams which are deadly at mid and long range. However, in terms of handling they’re about as responsive as the Millennium Falcon strapped to a 2-megaton asteroid.

And handling is, as I discovered, absolutely key. One of my biggest reservations in creating a dynamic experience with starships was the issue of space. Not outer space, but the three-dimensional arena itself. Cover and the shape of a physical map in any shooter is essential for providing opportunities for outmanoeuvring and respite from constant attack. A battleground where no one can hide is no fun at all.

Much to my surprise, Dreadnought actually manages to simulate the same effect using its own environmental obstacles. Many of the maps are planet-bound, and one frozen map includes snowy mountains, glaciers, and sprawling buildings that afford players cover from attacking craft. The effect is to make positioning paramount in any engagement. Popping your stern above the parapet of a protective valley allows pot-shots to be taken, but also makes you intensely vulnerable – other players can achieve missile lock, tractor beam you toward their force, or simply fire every gun at their disposal at the exposed nose of your fleet. 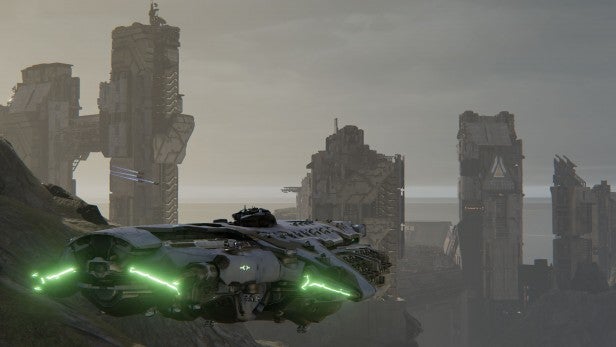 Travelling in groups and coordinating in some fashion is also important. The sight of a lone vessel turning the corner is intimidating, but when a Dreadnought and two Destroyers drift into view over a nearby ridge, it’s time to head for the nearest escape pod. Maybe you can try to jump away, maybe you can shunt power into your shields and pray for rescue, but what Dreadnought truly encourages is for players to not get caught in this situation in the first place.

It’s these games of hide-and-seek that make the Artillery Cruiser and Corvette classes such viable picks. Much like snipers in any shooter, it’s possible to position yourself in hard-to-reach locations for cover. Similarly, Corvettes can dive under buildings or around obstacles after quickly landing a set of deadly strikes. The ever-present game of rock-paper-scissors which underpins all strategic games is at play here, and I’m surprised, and impressed, that Yager has managed to maintain it in this format.

Related: Everything we know about Deus Ex: Mankind Divided

The result is a game of chess where the queen is armed with ballistic missiles. The pieces must be carefully, considerately, moved into position to make every strike count. Using your lightning-fast reflexes to save the day, as can happen in space sims or traditional shooters, is generally not an option. This isn’t a game about lightning-quick reactions, but the ability to make sound decisions in fleeting moments. It’s a refreshingly unique pace of battle in the current climate of twitch-based shooters and turn-based strategy. 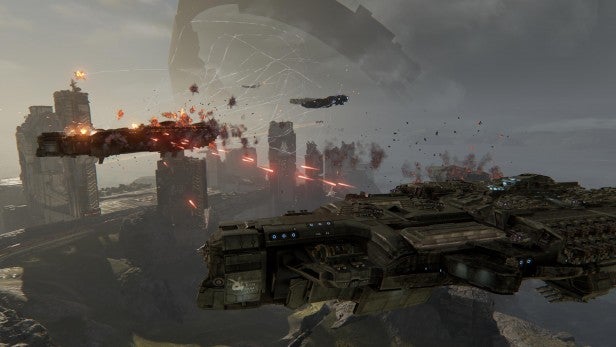 It’s this gentle tempo that allows Dreadnought to hit the micromanagement sweet spot; just enough to make you feel like you’re multitasking, but with enough time to consider the consequence of every choice. In addition to controlling lateral movement and vertical thrust, players must manage their four active abilities, as well as the energy system.

Each ship possesses a fusion reactor which allows the captain to shunt power into one of three subsystems: engines, shields, or weapons. When active, the ship’s energy reserves slowly drain until depleted. It’s a clever way of inducing those ‘she cannae take much more, captain!’ moments where you’re desperate for more energy to survive an incoming onslaught but the old girl just doesn’t have the juice.

A thoroughly engaging experience this may be, but I hope that Dreadnought will add some extra spice to its multiplayer matches before release with meaningful buffs and objects of interest. Perhaps a nebula in which players can hide from sight, or some kind of collectible buff over which both sides can tussle, each slamming power to the engines to reach the prize first. These are, however, wishlist items rather than core necessities. What really matters is whether Dreadnought delivers, and if it continues on its current trajectory then this third-person-space-sim-arena-battle-blend is definitely headed in the right direction.

The game is currently in a raw state; this is a genuine beta as opposed to a fully functional demo – bugs and all. For this reason I’d recommend that most people skip the beta and waiting for the game’s full release later in 2016, but it’s worth keeping an eye on developments in the meantime. Without a doubt Yager Development will be adding to its existing fleet and experimenting with all kinds of sci-fi wizardry before it goes public.