What is the DrayTek Vigor 2860n Plus?

DrayTek specialises in business focused routers and the ‘2860NP’ is its new, premium dual-band 802.11n router, which it hopes will keep it at the top of companies’ wish lists. For the uninitiated who just did a double take at the price for a router lacking 802.11ac, the reason is DrayTek’s famous focus on reliability and security as well as its integrated modem. With 802.11ac yet to be officially ratified don’t expect to see it on a DrayTek router any time soon.

As such the bigger question is, in a time where reliability and wireless speeds are rising rapidly in cheaper consumer products, is the premium paid for a DrayTek device still worth it? 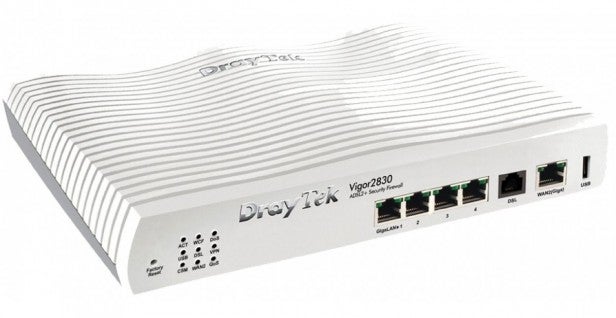 It would be fair to say style is not at the forefront of DrayTek’s design decisions, but for what the 2860NP sacrifices in looks, it makes up for in build quality and practicality.

Put succinctly, the 2860NP is rock solid. At 240.96 x 165.07 x 43.96 is one of the largest routers we’ve seen in recent times, though at 600g not one of the heaviest. Despite this it doesn’t feel hollow like most routers due to the thick casing, something it can offer since it ships with three external antennas.

Unlike most consumer orientated routers the 2860NP also puts its ports on the front for easy access, rather than at the back with the power socket. This makes a great deal of sense and is something we’d prefer more manufacturers did since trailing cables behind a router is inconvenient and messy.

Still looks never sell a DrayTek router, so what can the 2860NP do? The aforementioned dual-band 802.11n is obviously at the forefront along with backwards compatibility with 802.11abg but its integrated modem is arguably more interesting as it supports both ADSL and VDSL fibre optic broadband, including BT Infinity.

So what about all the ports on the front? For starters DrayTek addresses something we’ve long called for in consumer-focused routers: more Gigabit Ethernet ports. The 2860NP has six rather than the usual four and it is joined by a Gigabit WAN port should you wish to connect it to a cable modem. There are also VDSL/ADSL jack and dual USB ports, though they are limited to USB 2.0. 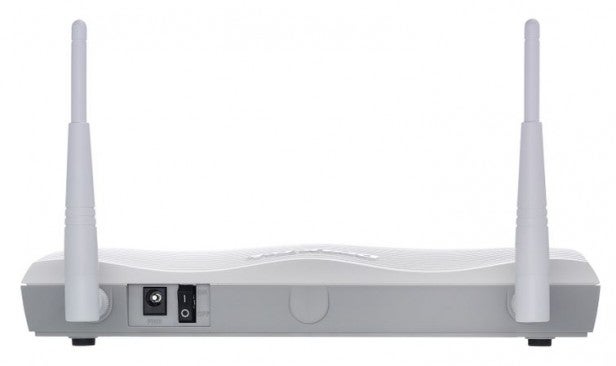 Additionally out of the ordinary functionality includes the ability to have up to four wireless SSIDs with numerous secure Guest modes, heavily customisable firewalls based on combinations of users, rules and restrictions and the ability to selectively apply QoS to specific users. There’s the option to create an ‘isolated VPN’ too, which prevents connected users from communicating with other users connected via a VPN. In short, privacy options are incredibly high.

There is also the ‘Commtouch filter’ that can block a variety of categories like nudity, drugs, games, social media and dating websites. The catch is to apply a blanket filter requires the ‘DrayTek GlobalView Web Filtering’ software, which runs from £24 to £85 per annum and we’ve seen consumer rivals like Smart Wi-Fi from Linksys offer similarly smart filters for free.

Elsewhere you’ll find more typical options such as support for WPA/WPA2 security and IPv6 and the USB ports can support the installation of 4G dongles, though there is a limited array of compatible models.