Launching in the shadow of Dark Souls back in 2012 for PS3 and Xbox 360, Dragon’s Dogma has gained recognition as a cult classic among hardcore RPG players. Set across a fantastical open world packed with strange monsters and sprawling cities, Dark Arisen takes the player on a flawed yet spectacular journey that can easily absorb hours of your life. Dark Arisen’s celebrated status is well deserved, and now we can finally play it on modern consoles.

During opening moments, Dragon’s Dogma makes it abundantly clear that it doesn’t take itself very seriously – and that’s definitely a good thing. After playing through an epic prologue sequence, I’m asked to create my character. With a multitude of tools at my disposal, I could conjure up true monstrosities of inhumane proportions. In the end, I went with a Strider. Armed with twin daggers and a bow, my agile warrior was capable of clambering upon even the largest of creatures.

There are plenty of other classes from which to choose, each of which can be levelled up and switched to from specific merchants spread across Dark Arisen’s world. I preferred vocations with improved agility, superseding the frustrating stamina system that makes traveling long distances an arduous chore. This is hampered further by a fast-travel system that is restricted to specific items, which feels asinine given how the game isn’t afraid of wiping the player out without warning, losing progress as a result.

Dark Arisen begins with your village being attacked by a rampaging dragon. After making a proper mess, the reptile literally steals your heart before fleeing the scene. This kickstarts the adventure, turning you into a heroic warrior known as the Arisen. Without a heart, you’re capable of disappearing into the rift and summoning companions known as pawns. Pawns are characters created by other players that are free to assist you in battle when called upon. 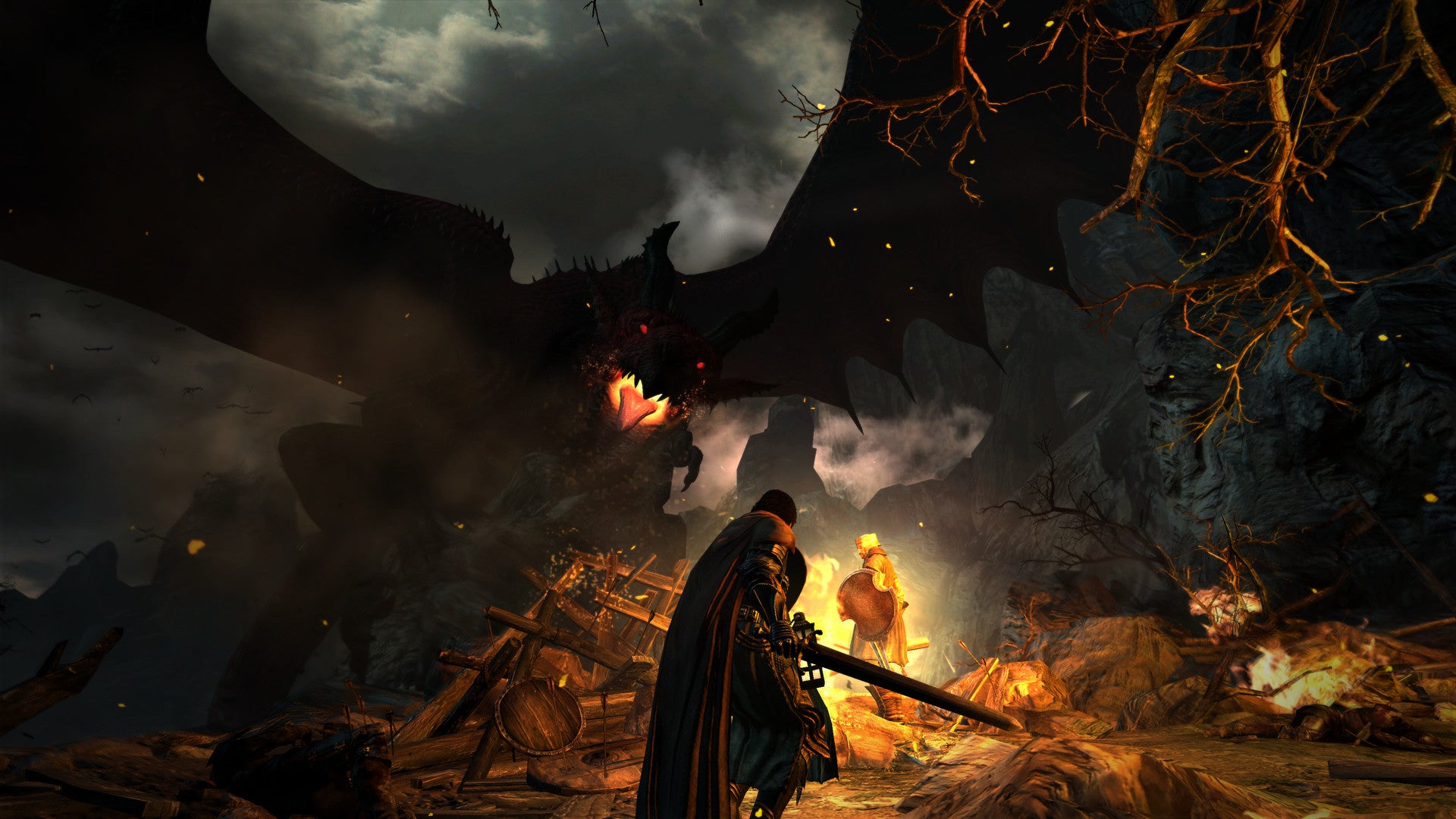 Making up the entirety of my party, ensuring all pawns were in possession of the right equipment and abilities was key to success in battle. One of these comrades is created by the player, performing in your troupe while simultaneously disappearing into the online world to help out other struggling warriors. This is a fantastic system, aping something you’d expect to see in MMORPGs but with finely crafted artificial intelligence instead of real players.

Pawns will always be supporting you in combat, whether it be through healing spells or shouting contextual tactics based on your enemy and environment. For example,  severing a giant lizard’s tail will cause it to constrict in pain, helpless to a barrage of attacks. Luring a cyclops into a vast body of water will slow its movements, while making it vulnerable to a devastating strike of lightning. Combining tactics in this way feels fresh and exciting, giving even the most pedestrian of encounters an epic sense of gravitas.

Combat in Dark Arisen, much like other action RPGs, varies greatly depending on the occupation you wish to pursue. Mages and Rangers will fight from a distance, while Knights and Striders get down and dirty by climbing enemies and focusing intently on weak points. Creatures come in various shapes and sizes, and thus require a range of strategies to take down. Much like Shadow of the Colossus, large baddies can be scaled, open to vicious slashes as they desperately try to shake you and your pawns off.

With the right combination of pawns, abilities and equipment, many battles can prove to be a trivial exercise of hacking away at adversaries until they fall to the ground. It may sound unexciting, but I was thrilled by the way in which my little decisions culminated in a confrontation that spanned several minutes. One particular highlight saw me storming a stronghold populated by an army of goblins and two towering cyclops. 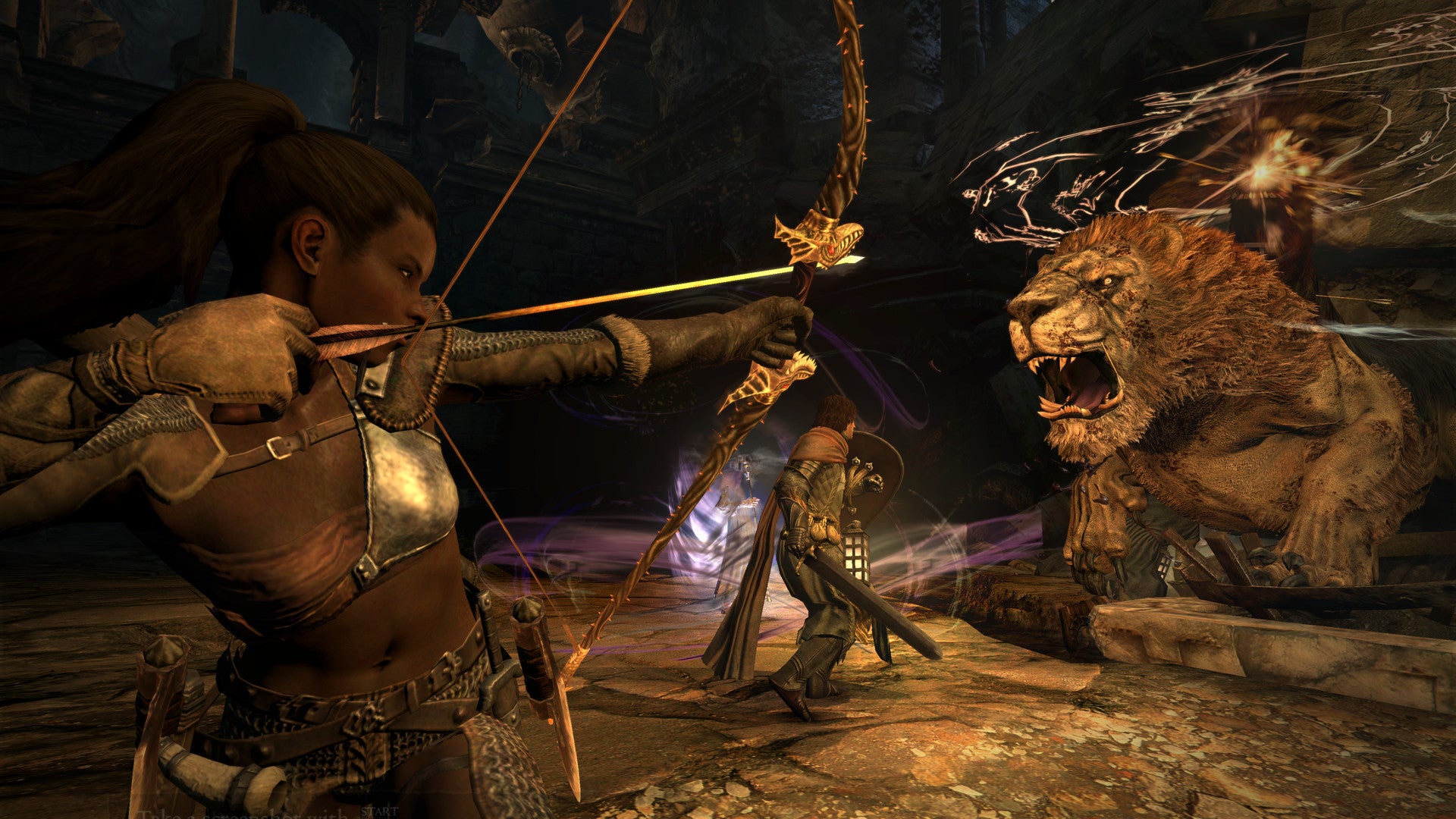 My team sprung into action, firing arrows upon the enemy while imbuing my daggers with powerful lightning magic. Armed and dangerous, I weaved through incoming artillery before climbing upon the monster’s back, cutting away as I did. After a bitter struggle, he finally fell – and I felt amazing. My pawns were battered and broken, but watching them emerge victoriously filled me with satisfaction. This is what Dragon’s Dogma does best: creating epic confrontations that feel genuinely natural in its world.

It’s good that Dragon’s Dogma’s procedural storytelling is so well executed, since the core narrative is clumsy and almost incoherent at times. The user interface does a mediocre job of indicating to the player which tasks are essential to the story and which are little more than generic side quests. Beyond tasks found on noticeboards in towns and cities, I spent much of my time taking shots in the dark with regards to which quests I tackled to progress through the main campaign.

This bungled presentation carries over to the rest of Dragon’s Dogma’s user interface, with its various equipment and item menus proving needlessly frustrating to navigate. It’s far too easy to become over-encumbered, and swapping items between allies proves to be needlessly time-consuming and hardly worth the effort. Why are items used and equipped in completely different menus? It makes no sense!

Many of these systems could have been streamlined, and I’m shocked to see that they haven’t been with the original release coming over five years ago. Having to jump through so many hoops just to effectively outfit your party is tiresome and proved to be a constant barrier to my enjoyment of an otherwise excellent experience. 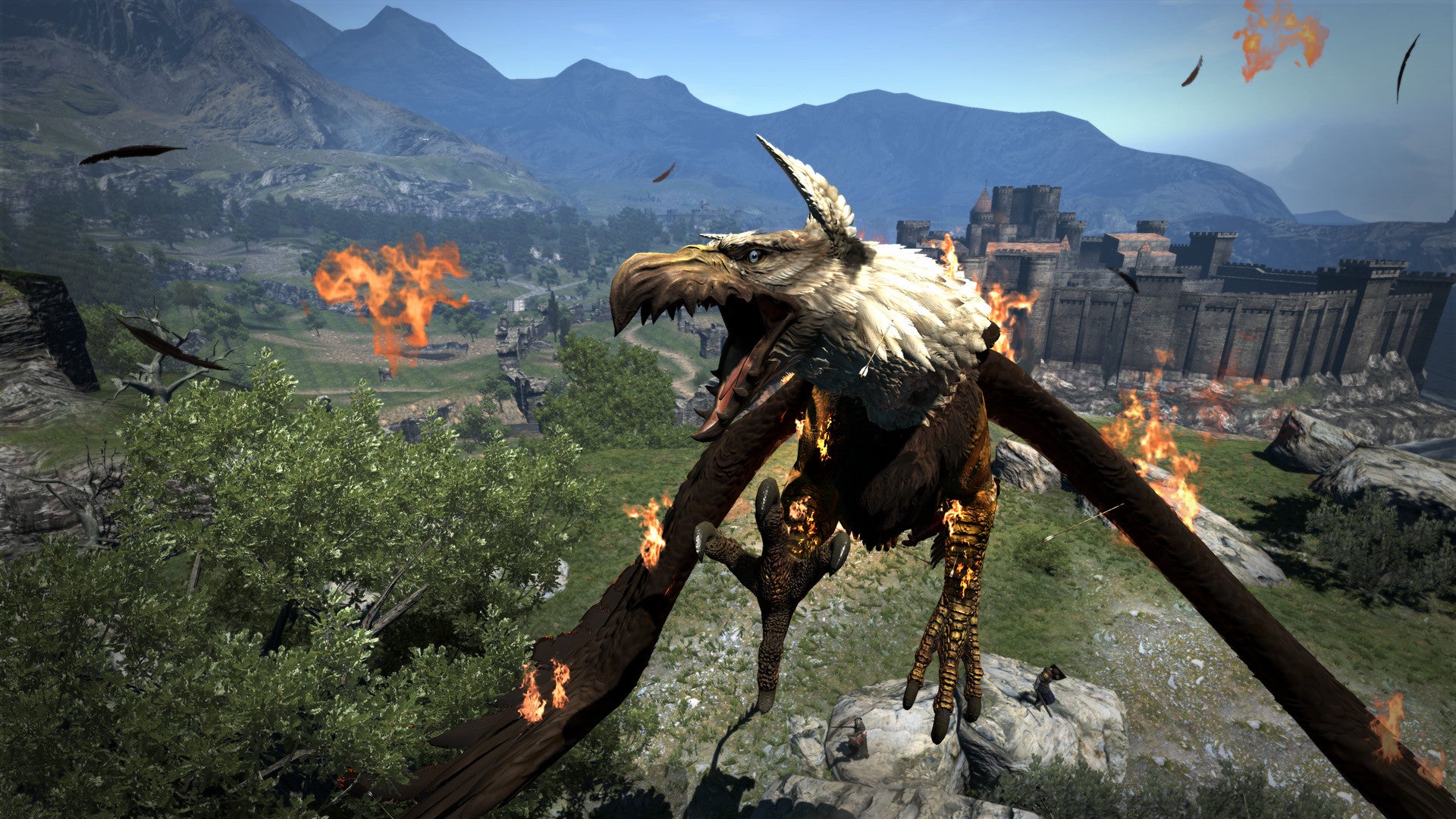 While many of its troubling blemishes remain untouched, Dragon’s Dogma has made the transition to modern consoles with flying colours. It runs brilliantly, presenting a plethora of transportive environments in which I couldn’t help but lose myself. A built-in photo mode makes it easy to capture spectacular battles as they unfold, although a few additional features wouldn’t have gone amiss.

Dark Arisen exclusive content is also available in the form of Bitterblack Isle. This formidable location isn’t for the faint-hearted, packed with high-level enemies capable of wiping your party with ease. However, with high risk comes high reward, and Bitterblack is absolutely filled with rare goodies just begging to be uncovered.

Dragon’s Dogma: Dark Arisen is a unique RPG brought to life by its fantastic pawn system and enthralling fantasy world. Forming a ragtag clan of allies before taking on gargantuan monsters is always a blast, helping you feel like a true soldier among a land of unimaginable terrors.

While held back by a handful of frustrating issues, the fiendishly addictive core at the centre of Dark Arisen is impossible to resist.