You may not remember how things were a decade ago, but Dragon Quest VIII: Journey of the Cursed King was the game Square-Enix hoped would put Dragon Quest on the Western gaming map in the way that Final Fantasy VII had done for Japan’s other blockbuster RPG series some nine years before. Sadly, it wasn’t to be.

Despite an excellent English localisation, fantastic voicework and some pretty revolutionary features for the genre, Dragon Quest VIII never sold in the numbers Square-Enix hoped. The series is still yet to really catch on over here, with the 3DS-only Dragon Quest IX a cult hit at best and Dragon Quest X unlikely to see a release in the US or Europe. If Dragon Quest VIII was Dragon Quest’s big shot, you could argue that it blew it.

Playing it again in this new 3DS version, it’s not hard to understand why. Where Western RPGs can rely on Tolkien-style high fantasy or the grim, gritty tropes of the modern genre giants, Dragon Quest is all a bit, well, twee. Anyone expecting the cinematic spectacle and teenage drama of Final Fantasy was bound to struggle with a game where the tone stays deliberately light and humorous and the storytelling low-key, with even the monsters often played for laughs. And in a genre that was keen to move forward, where complexity is often confused with depth, Dragon Quest VIII felt surprisingly retro – even over-simple. Just compare it to Final Fantasy XII, published here later in the same year. 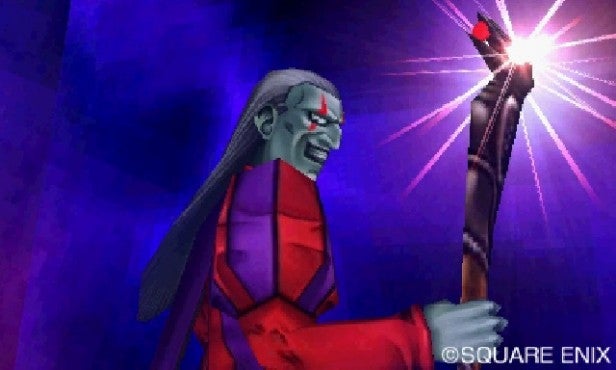 Yet time has been kind to Dragon Quest VIII. In fact, on the 3DS it might have found its perfect platform – maybe even its perfect audience.

For one thing, the game’s cel-shaded cartoon visuals shine on Nintendo’s handheld. True, the presentation isn’t quite as crisp as on the PS2, while draw distances could be longer, with objects, wandering monsters and even sizable items of scenery popping into view from time to time. However, the game’s world and its inhabitants still look bright, colourful and brimming with personality, the team’s artists doing a lot to extract maximum character from fairly scant resources.

And all this happens in a game where, breaking the JRPG mould, players are free to wander where they wish, either on or off the beaten track. Dragon Quest VIII’s fantasy world might not have the richness or detail of more recent epics like Final Fantasy XV, The Witcher III or The Elder Scrolls: Skyrim, but it’s still great to explore – even if the only thing you’ll find off the path less travelled is another bunch of monsters or a barely hidden chest. 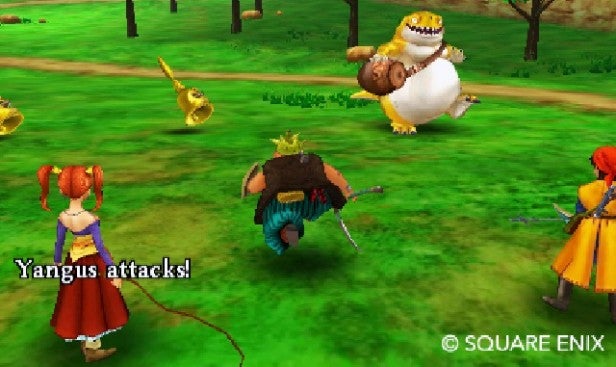 Now, about those monsters… Dragon Quest VIII, like many of its JRPG contemporaries, was still in thrall to the idea of wandering monsters, with every landscape and every dungeon crawling with a bunch of free-roaming skeletons, zombies, overgrown beetles, sentient bells, big-lipped slugs, dancing devils and more. These respawn and can be hard to avoid and, to make things worse, don’t even represent singular monsters. In fact, often what looks like an isolated slime knight will turn out to be three of them, with a dice-faced devil and a couple of walking trees thrown in for good measure. Every now and then this can result in a fatal shock.

What’s more, Dragon Quest VIII’s combat felt old-school even in 2006, and it feels positively retro by today’s standards. It’s classic turn-based stuff, with heroes and monsters taking turns to bash each other, with the order of battering dependent on your stats. As well as melee and ranged weapons there are spells at your disposal, plus special abilities with which to soften up or temporarily subdue the enemy. The fighting is simple and accessible, but not particularly tactical, and anyone expecting the camera flourishes and epic summonings of a Final Fantasy may be disappointed. As with everything, combat in Dragon Quest VIII works on a smaller scale. 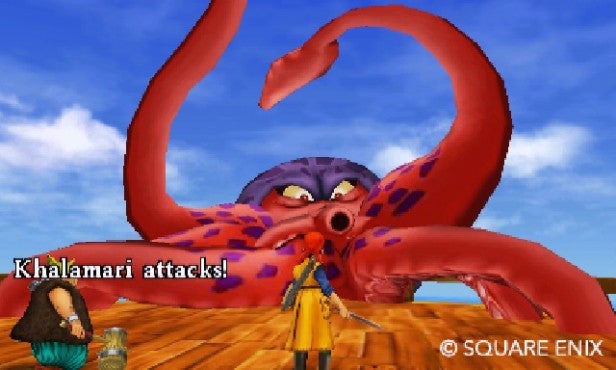 Even the character progression follows on in the same vein. Where Final Fantasy’s character progression grew increasingly baroque between FFVII and FFXIII, Dragon Quest VIII keeps things simple, with just your basic experience points, levels, new spells and preset stat upgrades, and a system of skill points with which to boost your character’s competence with specific weapons, unlocking new abilities on the way.

This isn’t, then, an RPG of real complexity or depth, despite a basic alchemy crafting system that allows you to hone and boost your fighting gear. It is, however, a really enjoyable, easy-going game, where the likable characters, cheerful tone, funny script and consistently strong voicework keep you coming back for hour after hour after hour. 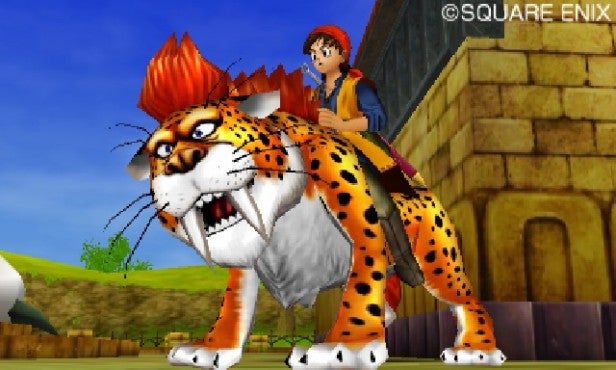 Dragon Quest VIII’s storyline never reaches the operatic highs of a Final Fantasy, but it’s always engaging. As the sole guard and champion of the titular cursed king – now a grumbling, little green troll – your central hero becomes the focus for a party of misfits, your central quest to find and destroy an evil sorcerer forming the framework for a string of good deeds. One hour might be spent trying to stop the evil Dhoulmagus – one of the genre’s finest villains – slaughtering the inhabitants of an abbey.  The next may be spent helping a broken-hearted king move on from his wife’s tragic death. This is not a game of ambiguities or dark, moral choices. You’re here to fight the good fight, explore and have fun.

And something about this spirit makes Dragon Quest VIII an almost perfect fit for the 3DS. You can pick it up and play it for 10 minutes or half an hour and feel like you’re getting somewhere, although it’s so ludicrously absorbing that you’ll more often struggle to put it down. Trust me – I’ve been sneaking in games while waiting for the kettle to boil or the dinner to cook or even in the spare 20 minutes before the afternoon school run. The results? Unmade drinks, inedible meals and sulky children waiting by the school gates. 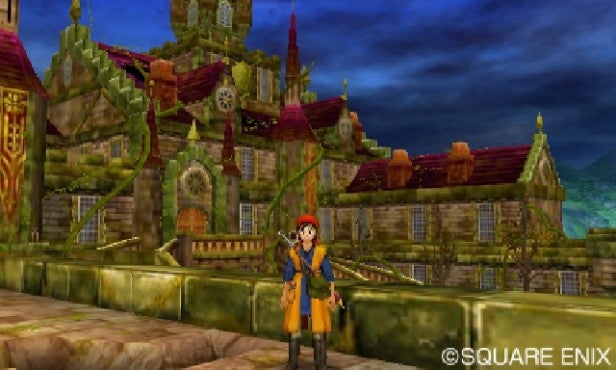 The 3DS version adds a few new twists, although oddly not the most obvious one: 3D. Twitch the slider up or down, it doesn’t matter – the image stays totally flat. Instead we get a photo mode plus a new series of photo challenges, some additional side-quests and two new playable characters in the latter stages of the game. None of this stuff transforms the experience, but it does make a very big and satisfying game even more so.

3DS owners will also appreciate some more practical improvements, including a neat use-anywhere quick save that leaves you less reliant on the normal chapel save points, and a fast combat mode to speed up the pace of fighting – something you’ll be grateful for in the busier dungeons.

This isn’t the best JRPG on the 3DS, where the Fire Emblem series reigns if you’re happy with some strategy, and where Bravely Second: End Layer triumphs if you prefer things a bit more trad. Yet Dragon Quest VIII isn’t all that far behind. This is the best way to enjoy one of Japan’s best-loved exports, beating both the PS4 original and the hamstrung, dialogue-free iOS and Android ports. And maybe, if enough of us buy it, we might have a decent shot at seeing the forthcoming Dragon Quest XI released over here.

If you have a 3DS, love RPGs and never played the PS3 original, consider Dragon Quest VIII an almost essential purchase. If anything, its easy-going style and accessibility make it a better fit for the handheld console than for the original platform, and you’ll struggle to find a JRPG that’s easier to pick up or harder to put down.

The quirky style and silly humour still ensure that it’s not a game for everyone, but if you can make some space for an adventure with imagination and real heart, give this one a go.