In Europe, we’ve had to wait a long time to play a Dragon Quest. Those of us who really started playing these things with Final Fantasy VII have long wondered what it would be like to play Japan’s other big RPG, but without a detailed knowledge of the language we’ve been left out in the cold. As a result, the release of Dragon Quest VIII – the first entry seen over here and the first on PS2 – couldn’t have been any more anticipated. 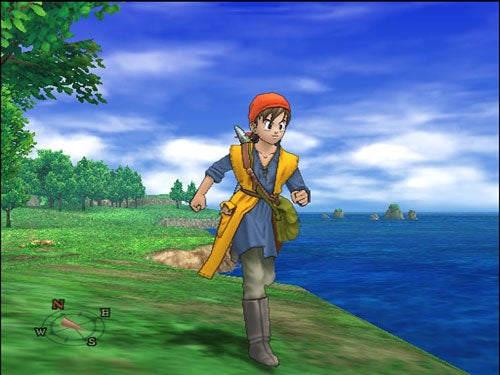 So it’s somehow fitting that, with Dragon Quest: The Journey of the Cursed King as it’s known over here, patience is a necessary virtue. To be totally honest, the first three hours are a bind. The action moves at a painfully slow pace and your two-strong starting party can be wiped out with ease, sending you straight back to the nearby town and forcing you to redo whole dungeons from the start.


To make things worse, the game hits you immediately with ludicrous numbers of that old Japanese RPG horror: the wandering monster. Even the simplest journey seems stretched to the point of misery. In effect, you’re made to feel like Dragon Quest’s whipping boy, and it’s at this point that the negative thoughts keep coming: “Haven’t RPGs got a lot further on than this? Shouldn’t I be having fun by now?” you’ll ask. From the simple turn-based combat to the basic character progression system, Dragon Quest feels like a Japanese RPG of early nineties vintage. It’s certainly less complex and more accessible than the Final Fantasy series has become, yet it’s oddly hardcore in its own way. It feels like it should be able to reach an audience that doesn’t usually play RPGs, yet it would lose most casual gamers within thirty minutes of the off. 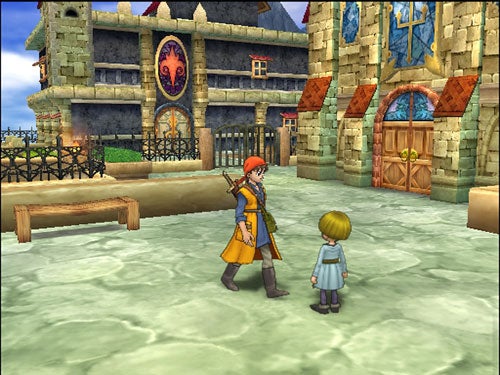 The fact that the game survives this slow start comes down to one thing: charm. For a start, Dragon Quest looks beautiful. Anyone can do cel-shaded cartoon graphics, but this is one of those rare games – Legend of Zelda: The Wind Waker being another – where thought and imagination make the difference between dull technique and bold artistic choice. Again, there’s something retro at work here. As anyone who has played the masterful Chrono Trigger – which shared the same artist, Akira Toriyama – will note, Dragon Quest brings the bright, colourful worlds of the classic Super Nintendo RPGs to vivid 3D life, and the change from the gothic sci-fantasy gloom of most PS2 RPGs could not be any more pronounced. The result is a storybook fantasy world you will want to explore, with its forests, trees, rivers, castles, beaches, caves and villages just waiting for your party to discover them. 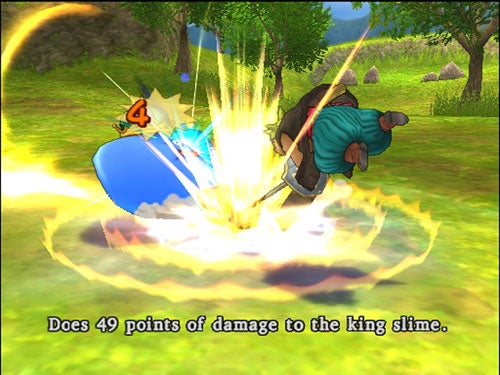 But the charm goes beyond that. There’s something wonderfully naïve about the whole enterprise; something unique about its big-eyed heroes and feisty heroines. Dragon Quest isn’t a story of dark ambiguities or sudden twists – it’s a game of simple values and primary colour emotions, told with a sense of humour and a knowing wink. The characterisation is the simple stuff of Star Wars – with a fiendish pantomime villain, a good-hearted hero, a gruff sidekick, a fiery redhead with an outsized cleavage and a lovable rogue with a secret sorrow – and you can pretty much guess the details of the plot. 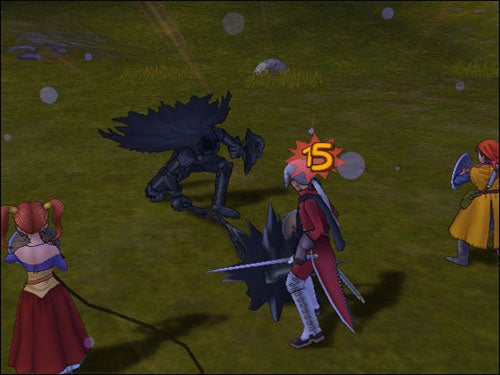 You might love Dragon Quest, or you might hate it, but a lot will depend whether you mind fighting a bunch of comical bats, slime-riding knights and oversized lips with eyes on stalks, or whether you’ll start crying for those good old orcs and goblins. Let’s just say that if you’ve found Final Fantasy a bit eccentric, then Dragon Quest might be one step too far down the road to nutsville. It’s childlike – maybe even childish – but if you can get past that then it’s also oddly wonderful.


It helps that the script localisation is such a solid bit of work, and that the voices are generally of an impeccable standard. It must have been tempting to bland out characters like the green-skinned, hunchbacked King Trode or the ludicrous, schizophrenic killer squid, Kalamari, for a western audience, but instead Square-Enix has maintained what I imagine was the playful tone of the original Japanese version. And while you may not die laughing at the outbursts of Yangus, played with a brash charm by thuggish comedian Ricky Grover, you’ll certainly sit there smiling. Other translators should take note. 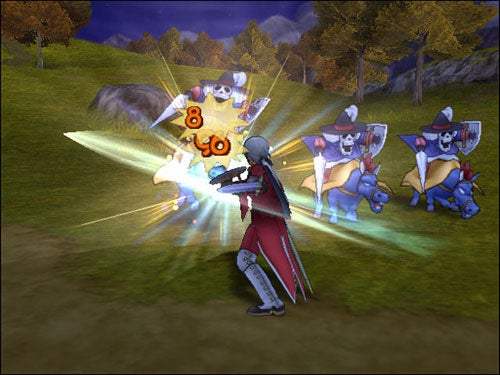 All this is very lucky, because you’ll need plenty of distraction to hide how slow the story progresses in the early stages, and how many hours it takes to get anywhere. Think of that great first act in Final Fantasy VII: the characters, the drama, the comedy, the odd little side stories, packed with emotion; the climactic moment in the Shinra tower. In Dragon Quest, it’s about nine hours before your party is fully assembled, another five hours before any spectacular spells or attacks start to creep in, and longer before it hits any kind of big dramatic high point. The story is even surprisingly linear – there may be plenty of towns and masses of characters, but side quests are few and far between, and though you may want to explore those green hills and rugged coastlines, you’ll be lucky to find more than the odd hidden chest or unique monster. 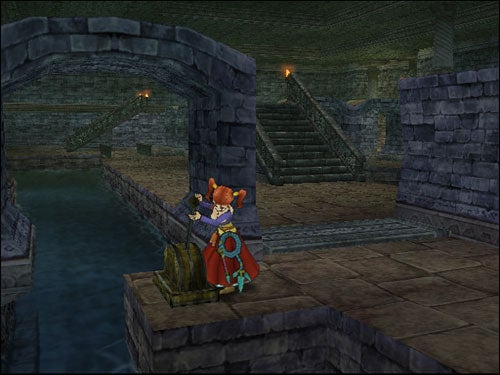 And now I come to mention it, doesn’t the action get repetitive? The combat is the only real source of challenge, and even there once you work out your parties optimal tactics for dispensing large groups of baddies, you can happily repeat these with only the odd rethink when you gain a new weapon or encounter a more difficult boss character. 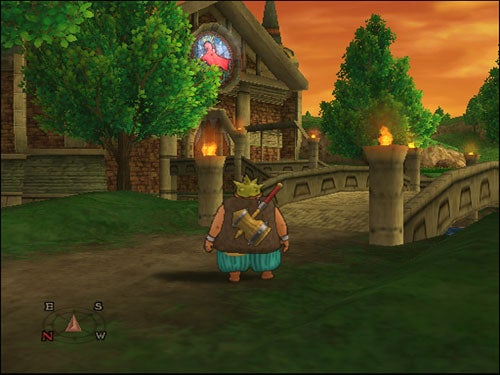 In fact, while I’m on the subject of repetition, let’s talk about the soundtrack. Yes, Dragon Quest has lovely orchestral themes and dynamic combat music, but there are times when you wish there was a little more variety. My poor wife has already started to dream the fight music, and I’m sure that my three week-old baby will regard it as a lullaby in years to come.


But here’s the odd thing: with all this said and done I’ve found myself hopeless addicted. Past the ten hour mark, with my heroes levelling up more frequently, some cool new weapons under my belt and access to the alchemy pot for fashioning my own magic items, the game had me under its spell. It had even thrown in zoom and instant evacuation spells that took the chore out of all that dungeon-hacking and back-tracking. Most of all, I could feel that killer charm had fully taken hold. By the time I found myself trying to heal a widowed king’s broken heart, I’d found the game and its characters almost pitifully likeable. I wanted to turn the next corner, try out new spells and special attacks, and see where that simple storyline goes next. 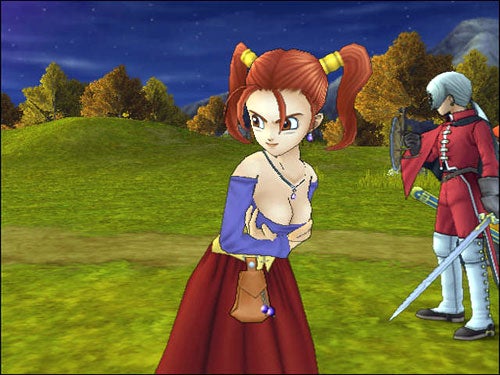 Like a classic children’s story or an old animated film, there’s something in the game’s lack of obvious sophistication that strips the Japanese RPG back to its most basic pleasures: building your characters’ powers and just finding out where to go and what to do next. It’s surprising how strong the pull can be.


One final testament to Dragon Quest’s strange power: I think there’s an awful lot that the game could do better, and I can’t really believe I’ll make it through the full 60 hours or so to the end. Yet on evenings and at weekends I’ve been neglecting games I’m sure are better – including the mighty Elder Scrolls: Oblivion – in favour of another few hours of this. Your response may well vary, particularly if you’re used to more sophisticated RPG fare, but if you have the patience and a mind open to wonder, this is one of the most enjoyable games I’ve played this year. 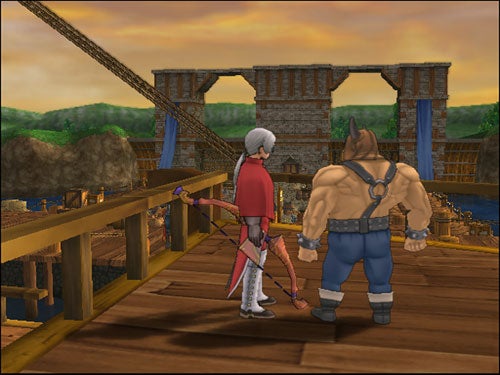 
It might look back to simpler times, but few RPGs of any kind are this engaging. Get through the first few hours and, provided you can stomach its wide-eyed charm, Dragon Quest will hold you captive with a strength you might not initially credit.