There’s something about Dragon Quest that seems to lend itself to hybrids. Maybe it’s the bright and breezy cartoon style. Maybe it’s the charming sense of humour, the way it doesn’t take itself as seriously as your average JRPG monster franchise.

On paper, the whole idea of a JRPG meets Minecraft clone mash-up sounds bizarre, but Builders makes it work. The first-person perspective of Minecraft is ditched in favour of a more distant, third-person view that’s reminiscent of classic 16-bit RPGs. The crafting core of Minecraft is borrowed then repurposed. You’re still mining for and harvesting materials, using these to craft useful equipment and building blocks. You use these blocks to construct increasingly sophisticated facilities and homes, so you can sleep, eat, fortify and craft more stuff. But Builders wraps this all inside an over-arching story, complete with quests, monsters and a colourful cast of friends, potential allies – and villains.

You’re the legendary Builder, awakening from an age-long slumber in a fantasy world. It’s a world in which the dark lord has triumphed, and where civilization has been torn down. Guided by a friendly deity, you begin to put the first blocks back into place, turning ruins into shelter, a shelter into home, then slowly finding and recruiting survivors to repopulate your nascent town.

These good folk will help you in your crafting, but also provide new ideas on what to build. With their aid you’ll take your town through a fantasy renaissance, rediscovering bronze, iron and steel, unlocking recipes for better food and stronger defences, not to mention furniture, horticulture and interior décor. 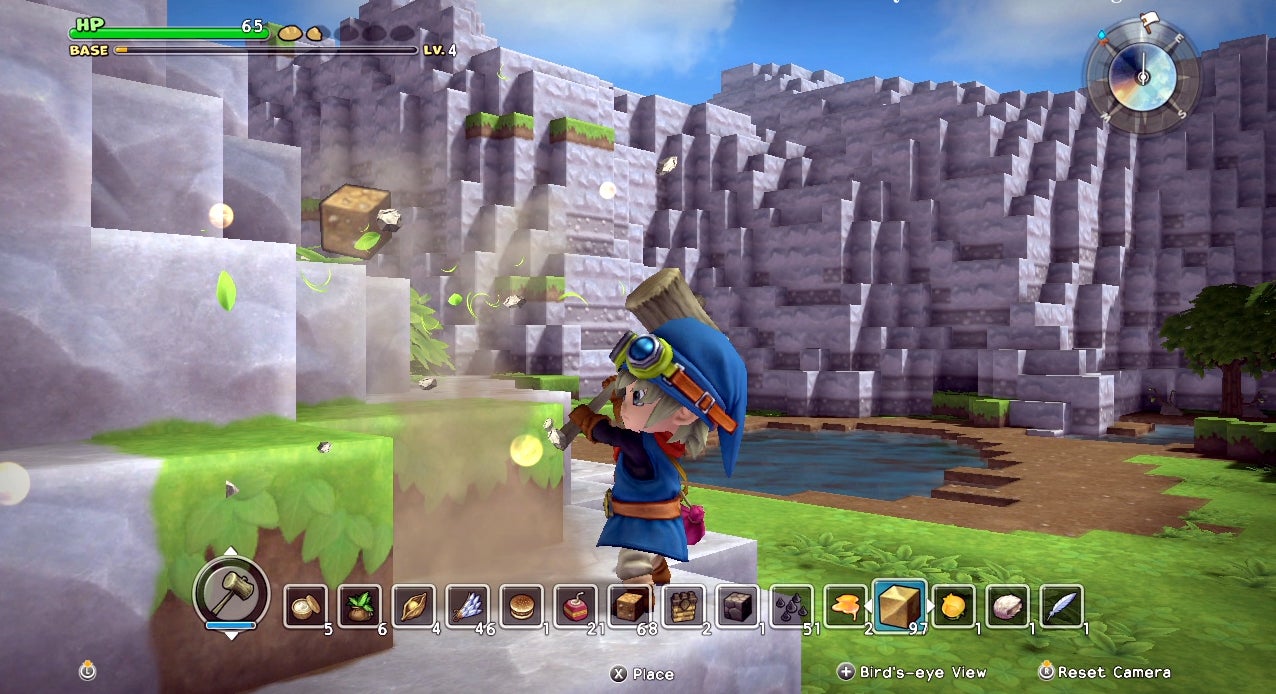 To make all this stuff requires the construction of new workbenches and forges, however; not to mention the gathering of raw materials to make it with. Some of these need to be mined, first using primitive tools then increasingly robust and effective new ones. Others need to be bashed, slashed and battered out of the increasingly aggressive monsters that roam the lands. Some will drop coloured oils; others fur, horn, cloth or meat. All of it can be harnessed to keep you and your comrades fed, clothed, armed and busy.

In the meantime, your new chums will give you quests. Sometimes they just want something built – but to build it will require the discovery of new materials, or the construction of something else first. At other times they’ve heard rumours of another survivor, who might bring new skills to the party. They might even need you to find an object that can be used and reconstructed to improve the town or its defences.

Either way, you’ll need to divide your time between battling monsters, mining and foraging, completing quest objectives and building up your town – not to mention cooking, eating and sleeping when you get the time.

This all builds into a series of enjoyable, absorbing gameplay loops – where you’re part wandering adventurer, exploring strange new lands, and part craftsman or construction worker, steadily beefing up your town. Your friends can be annoyingly insistent in their demands for an armoury or bedroom, but they’ll also produce food and materials you can use yourself.

Meanwhile, the passage of day into night and back again helps build a rhythm, where you return home for a nap and to avoid the more dangerous night-time monsters, then go out again for more when morning comes. 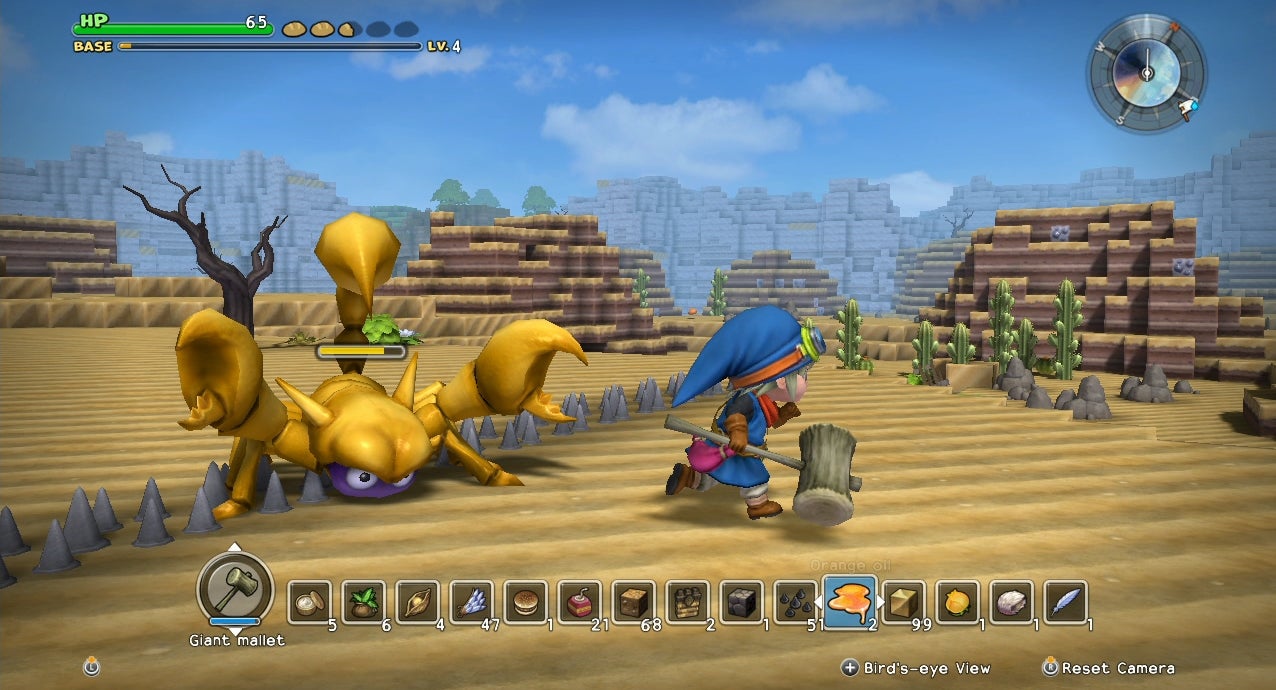 Every now and then, you’ll face a staged defensive battle, where waves of monsters assault your town until you and your compadres fight them off and slay their leader. Doing so will reward you with a health-enhancing seed or – occasionally – a teleportal, opening up new areas to explore. There you’ll find new monsters, plants and minerals, increasing the range of goods and structures you can build. You’ll find new friends and feel like you’re putting the world back on track. But don’t get smug: what might appear to be a story of steady triumphs is just one chapter of a much larger tale.

Dragon Quest Builders has its oddities, including a camera that becomes flustered in cramped spaces, your character’s inability to swim or even bridge bodies of water, and a very simple, underdeveloped combat system (think 16-bit Zelda with fewer moves). Yet the actual building works surprisingly well from the odd perspective, while the adventuring stuff is a lot of fun.

As in Minecraft or Monster Hunter, there’s little real character progression beyond additions to your maximum health. However, new arms and armour buff your attack and defence, enabling you to start taking on the larger beasties that try to do you harm. The game does a great job of teaching you what to build and how to build it, and key projects even come with their own blueprints. Lay one of these beauties on the ground, and you’re shown exactly what goes where, block by block.

The art style, meanwhile, works superbly on the Switch. The clean lines, bright colours and classic Akira Toriyama character designs look great both handheld and while docked, with the (unsurprisingly) blocky scenery juiced up with textures, lighting and effects. There’s little voicework, which is a shame given how well it’s used in the Dragon Quest Heroes games and the classic Dragon Quest VIII. But the score is classic Dragon Quest, with rousing marches and eerie music to fit your daily and nightly travails. 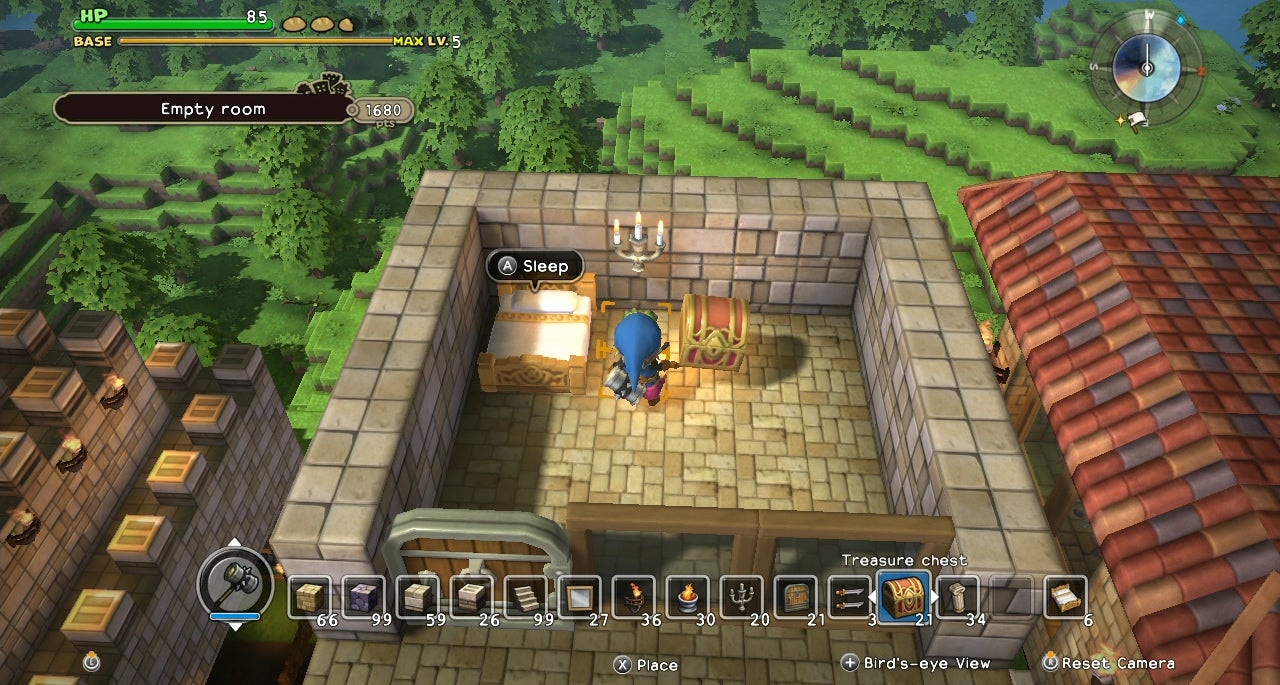 Most of this I expected from having played the PS4 original, but what I didn’t guess was how perfect a combo Dragon Quest Builders and the Switch would be – particularly in handheld mode. It’s a game that you can pick up and play for 20 minutes and still get something worthwhile done, where the rhythms of the action suit more casual, stop-and-start play.

Yet it’s also a game that can keep you absorbed for longer sessions, so that half an hour becomes an hour, then an evening, then one of those sessions that creeps into the dead of night. You’re always just on the verge of building, doing or discovering something, and just when there’s a hint that it’s growing repetitive, something happens and the tale takes a new turn.

And if you prefer a more creative experience without monster attacks and cataclysmic events, then completing the first chapter unlocks a more freeform sandbox mode, where you can build the town you want and see it settled. This adds more longevity to what’s already a pretty epic saga.

Verdict
Dragon Quest meets Minecraft clone might sound like an odd couple, but Square-Enix has made the two mesh together in ways that bring the best out of both. Builders works as an accessible action RPG and as a more objective-driven take on the mining, crafting and survival sandbox genre, all wrapped up in Dragon Quest’s lovable, upbeat cartoon style.

It’s another brilliant game for Switch, ideally suited to its drop-in, take-out style of gaming. For some, it won’t be dark or deep enough to satisfy – but why worry? If you’re after some creative fantasy escapism, Builders serves it up, block by block.