Screenshots for this review are taken from the PS4 version of the game.

The Switch is gathering more and more momentum with each passing month and it’s starting to be a lot less surprising when a big hitter from the Xbox One and PS4 gets ported over to Nintendo’s handheld hybrid, and now is the turn of Arc System Works’ brilliant fighting game Dragon Ball FighterZ to appear on the console. For the most part, it is a damn good version of a great fighting game.

Dragon Ball FighterZ is a tag-team fighting game, which basically means you pick three characters from the base roster of 21, each with their own fighting style whilst in battle and an attack that can be called in as an ‘Assist’ when they’re waiting on the sidelines. The key to success is figuring out which characters work best with each other – which characters can continue a combo after a certain move from another, or which assists will help you open up your opponent or bridge a gap in a lengthy combo string.

It’s a fascinating system, as a lot of the time you’ll find that most of the stuff you’re putting out is smoke and mirrors, trying to trick your opponent into letting their guard slip for a split second, landing that one hit and converting it into as big a combo as you can muster – burning through your metre that allows for teleports attacks, tagging in characters mid-combo and, of course, the spectacular super moves. It’s so versatile, giving you several options in almost every situation and really rewarding those who can process the fast-paced action and read or react to their opponent’s attacks with the tools and moves they have available. 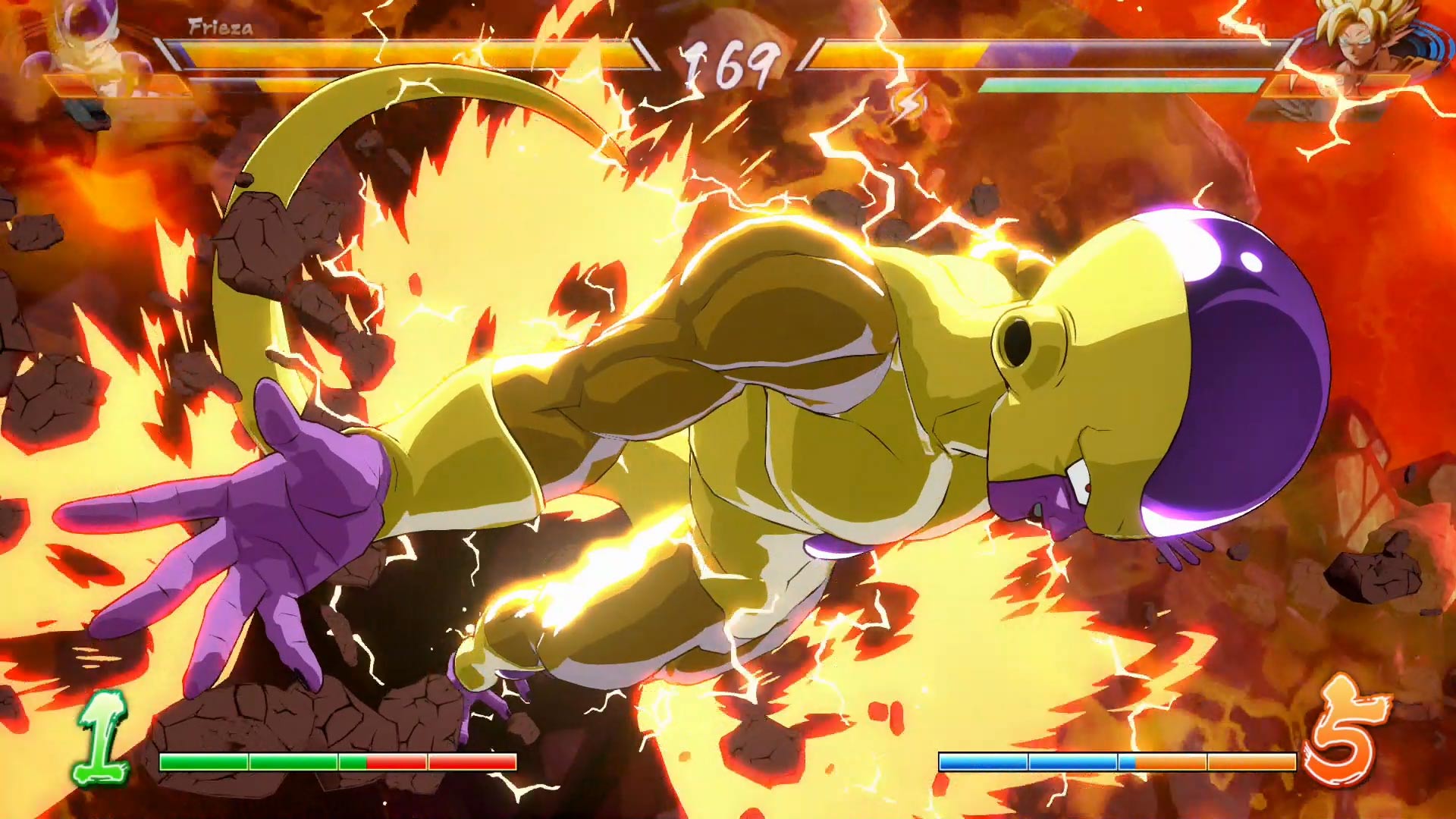 It’s a big, fully featured game too, with separate Arcade and Story Modes providing plenty for the solo player to do, a solid yet underwhelming suite of training tools and, of course, online battles. So far, these have been a bit more unstable than the PS4 and Xbox One version of the game, no doubt in part due to Nintendo’s less than stellar online track record, but also due to the Switch being a fully wireless console – most fighting games really need a wired connection if you’re going to take them seriously – and you just don’t know if someone is playing in handheld mode, sat on the toilet, far away from their router.

All of the content from the original release is present, however. This isn’t a cutdown port, it’s the full Dragon Ball FighterZ experience.

There are a few caveats, however. First of all, it doesn’t look as good as the other home console versions but only by a small amount – it’s still a really good looking game. Akira Toriyama’s legendary characters and art have been perfectly recreated in Arc System Works now trademark 3D-but-it-looks-2D style. This graphical downgrade is much more noticeable in handheld mode, where there’s fuzziness around the UI and a clear resolution drop.

The bigger issue is that during cutscenes, such as the start of matches and super moves, there are noticeable frame drops. Luckily, this doesn’t appear to be as serious an issue during the actual fights, as this would be a damning situation, but there is the odd judder during hectic moments and does show that this is very much a game that has been ported over to a less powerful system.

Perhaps the cheekiest thing about this version is that it doesn’t come with the DLC characters who have already been released for the other versions – you still need to pick up a Season Pass if you want to play as Broly, Cooler and Bardock, who is an extremely high-tier character and used by almost everyone who plays at a competitive level. It’s not surprising, but a touch disappointing that this isn’t a ‘complete’ edition of the game. The Season Pass is available right now, and instantly unlocks all the characters, but keep this in mind when you’re dropping fifty quid on the game – it’s an additional thirty pounds for the pass. 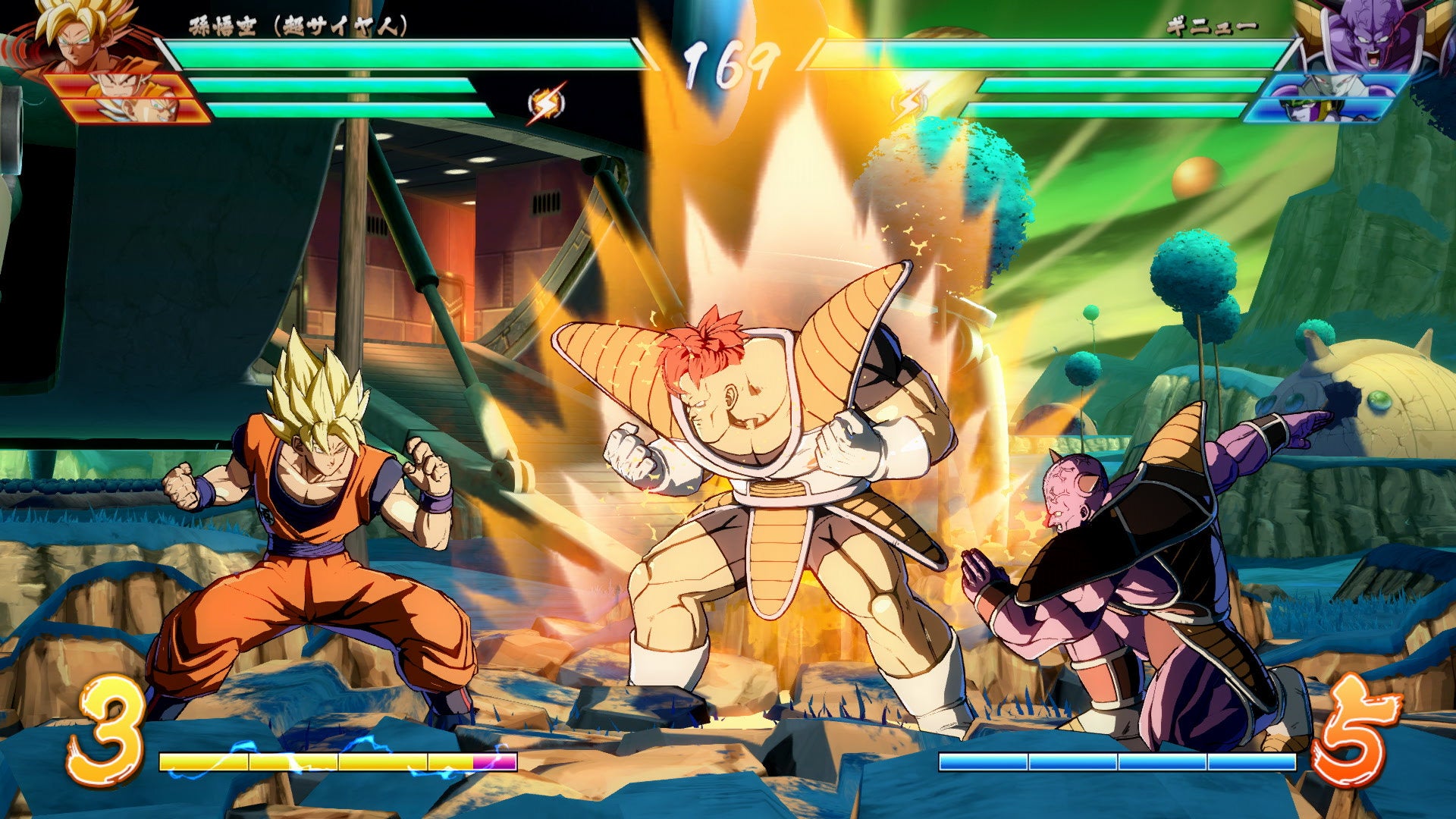 Then, there’s that issue with the character variance. Sure, a Dragon Ball super-fan is going to know all of the specific difference between the characters, but to anyone coming in fresh there’s an awful lot of spiky-haired lads wearing similar looking armour, and even the DLC characters haven’t really changed this. When you’re playing the game, they all have fairly unique movesets and are worth trying out, but to the outsider, watching the game, it can look a bit like “Pink Goku, Blue Goku, Big Goku, Goku’s Dad Goku, Evil Goku”.

Dragon Ball FighterZ is a brilliant game and easily among the, if not THE, best fighting games currently available for the Nintendo Switch. Where Marvel vs Capcom Infinite, unfortunately, dropped the ball, Dragon Ball FighterZ has more than picked it up and ran with it, providing an experience that is well worth seeking out no matter your skill level, or whether you just want to see your favourite Dragon Ball characters knocking several shades out of one another on Nintendo’s console.

Despite a handful of issues that have arisen with the port to Nintendo’s console, Dragon Ball FighterZ remains one of the best of the current fighting games. It’s certainly one of the most fun, is amazing to watch and is far and away the best, most perfect use of the Dragon Ball license.

FighterZ is easy to pick up and, should you wish to take it seriously, is a game with immense depth and freedom to express your style of fighting – defensive or offensive – through the roster and systems in place.

It’s a standout fighting game on Nintendo’s system, worthy of your attention if you’re a new player looking for something to get your teeth into, a hardened Dragon Ball fan or even a DBFZ veteran looking for a way of taking your practice sessions with you when traveling!