What is it about games that make us feel absolutely terrible at playing them yet still manage to keep us entirely enthralled? Downwell – a purposefully retro, retro, retro release – is utterly unforgiving, plays out at lightning speed and, unless you’re fully on board, can be over in a matter of seconds. Yet, the first thing that meets you after that untimely death isn’t a desire to shut the game down, but rather an urge to give it another crack.

That’s largely because, as a concept, Downwell is the very definition of straightforward. As the name suggests, you take charge of a little guy as he falls into the depths of a well (seemingly intentionally if the game’s opening is to be believed). And your sole job is to keep him alive.

Those enemies are many in number. Either crawling across said platforms or simply floating in the air, they all gravitate towards you as if being pulled in by magnets, meaning standing still for all too long simply isn’t an option. Some of these enemies – which range from bats and snail like creatures to beings that look like they belong in the sea – can be squashed simply by landing on them and, indeed, some of the opening stages can be completed solely by guiding your guy as he falls, using on screen buttons to direct him left and right so the only contact you make is as you squash their bodies beneath your feet. 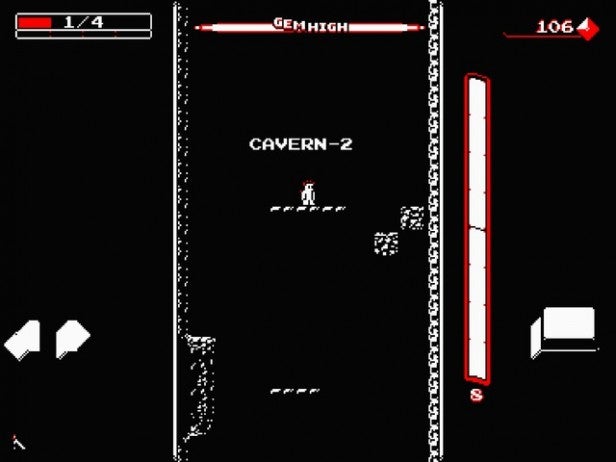 As you might expect, however, the further you progress through Downwell’s levels, the more populous those out to end your trip get. To meet this challenge, your own arsenal is given something of a boost, too. As well as bonuses and power ups awarded at the end of each of what appear to be randomly generated stages, secret rooms signified by large bubble-like shields on the tunnel walls also offer up goodies if you can halt your momentum enough in time to reach them.

Said bonuses range from exploding carcasses to take out multiple enemies at once to beefed up gun shoes, all ensuring you’re not left out of your depth – if you excuse the pun – as Downwell’s difficulty level ramps up.

Perhaps the most noteworthy part of Downwell, however, is the way it looks. We’re all used to retro games taking a pixel-art style that harks back to the 16-bit era, but those behind Downwell have decided to go back even further, serving up a game made up of just three colours – black, white and red – that wouldn’t have looked out of place in the early 1980s. It’s a decision that, even in what is now a highly saturated retro market, manages to give Downwell a level of distinction few manage to afford themselves. It’s an approach also complemented by the game turning the platformer on its head and tasking you with heading down, rather than simply running from left to right. 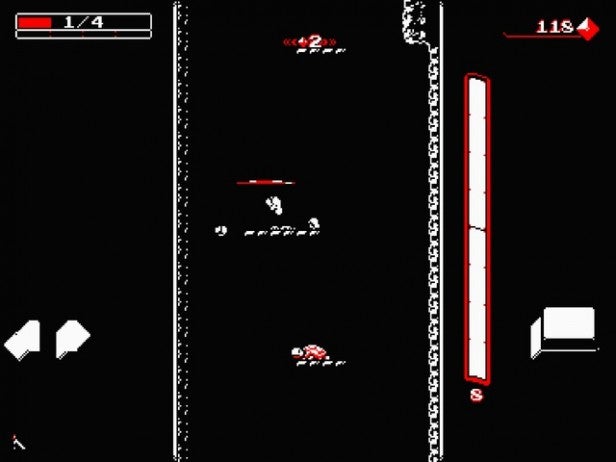 What the game lives and dies by, however, is its control scheme. With stages flying by at such pace, the ability to redirect your flight at a moment’s notice is crucial to the success of Downwell, and thankfully the whole thing is utterly responsive. It all means that death never feels convoluted or a matter of unfair play, but comes about because of your own glorious incompetence. As such, a restart is always the preferred course of action rather than simply giving up.

And that, more than anything, is the sign of a good game. Downwell most likely won’t sit well with an ultra casual audience, given it requires a certain level skill to even survive a few seconds, but it will play to platform fans who yearn for something a little different to a standard run-and-jumper. This is one fall into the deep, dark beyond that most people will be more than happy to take.

Verdict
More retro than even the most faithful of retro releases, Downwell is a 2D platformer flipped on its side and packed full of fast-paced action, with glorious and largely black and white visuals and an especially unforgiving level of difficulty at times.