What is the HTC Dot View case?

The HTC Dot View is a folio-style case that only works with the HTC One M8 and can display notifications for features like incoming calls and weather updates through the cover without having to turn on the smartphone’s display.

Priced at £34.99, it’s not exactly a cheap acquisition and retro nostalgia-inducing frills aside, we are not convinced that it’s the best HTC One M8 case to shell out on. 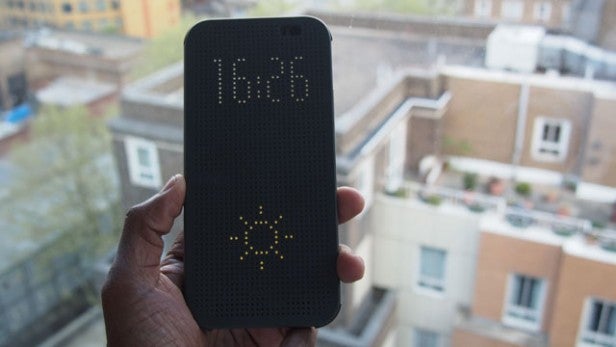 Hoping for something as slick as the M8’s metal chassis, it’s surprising that for an official case HTC has decided to go all plastic. It’s by no means tacky and it does have a kind of minimalist chic, but for £35 we hoped it would do a better job of accentuating the phone’s sleek styling.

At 12.6mm thick, it’s reasonably slim and doesn’t add significant bulk to the phone’s 9.35mm thick form factor. It’s slightly taller and wider than the handset but compared to a case from a manufacturer like Otterbox, the Dot View is not going make it look like you are carrying a tough phone in your pocket. You lose out on the rugged protection but it should be sufficient at guarding against everyday bumps and knocks.

It’s available in five colours and, as has become customary with phone manufacturers and ridiculous colour naming conventions, you have your pick of shades including Orange Popsicle, Baton Rouge and the Warm Black which is actually more charcoal grey. The latter does at least manage to compliment the silver finish on the M8. 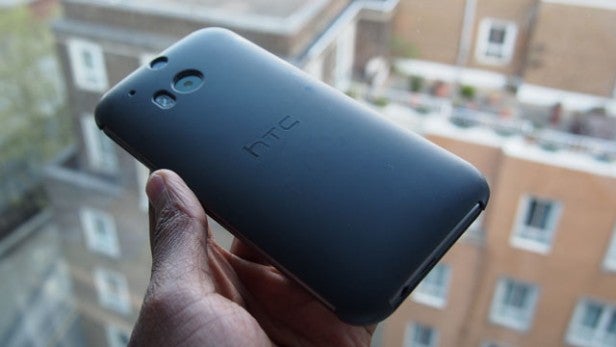 The case itself is made up of two parts. There’s the hard plastic shell on the back that clips onto the corners of the phone and leaves gaps to give easy access to the top, bottom and right edge where the volume rocker lies. Additionally, there are cut outs for the camera sensor and LED flash so you don’t need to take it out to put the UltraPixel camera to use.

Up front is the softer more mesh-like cover with rows of tiny holes that allow the screen to shine through. Behind the HTC logo lies a magnet that works in a very similar manner to the iPad Smart Cover turning on the display when you lift open the lid.

Holding the front and back together is a snap back hinge that’s one of the more troublesome design elements. It’s particularly a nuisance when you are trying to use the phone in one hand, forcing you to hold it in place behind the phone to prevent it from flipping back in front of the M8’s screen. 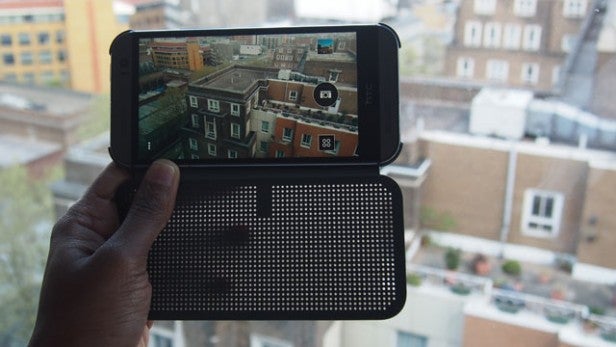 When it comes to taking photos it’s a frustrating experience as well. For portrait pictures you’ll need to prevent the lid from covering the camera sensor and in landscape mode holding the front flap whilst trying to balance the phone is far too fidgety, though of course this is an issue with most folio-style cases.

While the Dot View case might save your screen from fingerprint smudges it doesn’t prevent the perforated lid from leaving its smudgy mark. The display often looks grubby where the case presses up against it so you’ll find yourself rubbing it on your shirt or with a cleaning cloth regularly. 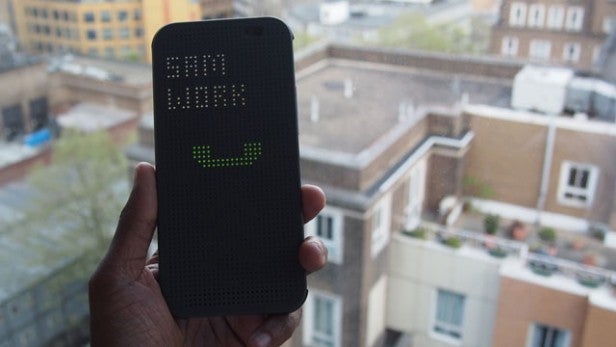 Currently, there’s really only a handful of things the Dot View case can do and they are all largely based around the M8’s core features. The lack of third party app support including Google’s own native applications is disappointing. HTC has made the software available as an app so there’s clearly potential for future updates enabling you to interact with Twitter or Facebook feeds.

What you can do at the moment is receive email notifications, schedule reminders, see weather updates all by simply making a very deliberate double tap on the front of the case or by pressing the standby button. The M8 then displays the dot matrix-style interface through the case.

It can also display volume level although you still need to actually touch the volume rocker to activate it. The most interesting feature is the gesture support to deal with incoming calls. When someone rings you, the screen will flash up with the contact and the option to swipe up to answer and swipe down to reject the call. Thanks to the proximity sensors in the phone, you can take the call without opening the case. 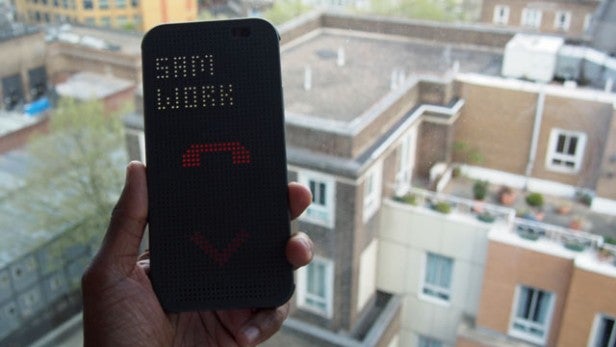 There’s very little to complain about the Dot View case in terms of the HTC One M8 features that it does work with. It responds well to gestures for answering or rejecting phone calls and taking a call with the cover on doesn’t dramatically impact on the call quality. The dot matrix UI definitely has a real retro charm about it, but there’s some obvious design issues that can make it a chore to use.

It’s difficult to see the notifications in bright sunlight for example and our issues with the snap back hinge, especially when taking pictures, can be frustrating.

Covering the M8’s metal body up with plastic instead of something more lavish just feels wrong as well.

Like Samsung’s S View case, the Dot View is a nice concept, but adding greater third-party app support would go some way to justifying paying more than £30 for it. For the same amount of money you could get a more protective case or one that doesn’t entirely hide away the M8’s great design.