I’m not sure why Pixelshard Games, the developers of hard-as-nails top-down tactics game Door Kickers, branched off to make a 2D side-scrolling shooter – but I’m glad they did. Door Kickers Action Squad is equal parts Rainbow Six Siege and Roll 7’s indie side-scroller Not A Hero, topped off with a healthy dose of style.

See, while Door Kickers hewed closely to realism — outside of the part where they put police officers in skull facemasks and outfitted them with military grade assault rifles — Action Squad takes its lessons directly from action movies. Here, an officer with a shield can turn a door into firewood, stunning everyone in a room, or an FBI agent can roll through gunfire unscathed, coming up shooting to save a hostage. Not that it matters if you don’t save the hostage. Action Squad is light on consequences and big on fun.

Stepping away from the real world a little bit is a smart move. As a fairly sheltered Englishman writing a video games review, it’s not really my place to discuss the role of the police departments in American society and the associated political minefield. Door Kickers itself definitely stumbled along at the wrong time, catching anger from several people for a positive representation of the police. By stepping into action movie territory, Action Squad avoids these criticisms, instead presenting a shooter where the police are mostly heroic, and only occasionally get blown up by a suicide bomber, or hacked up by a sneaky git with a machete emerging from an unnoticed doorway. 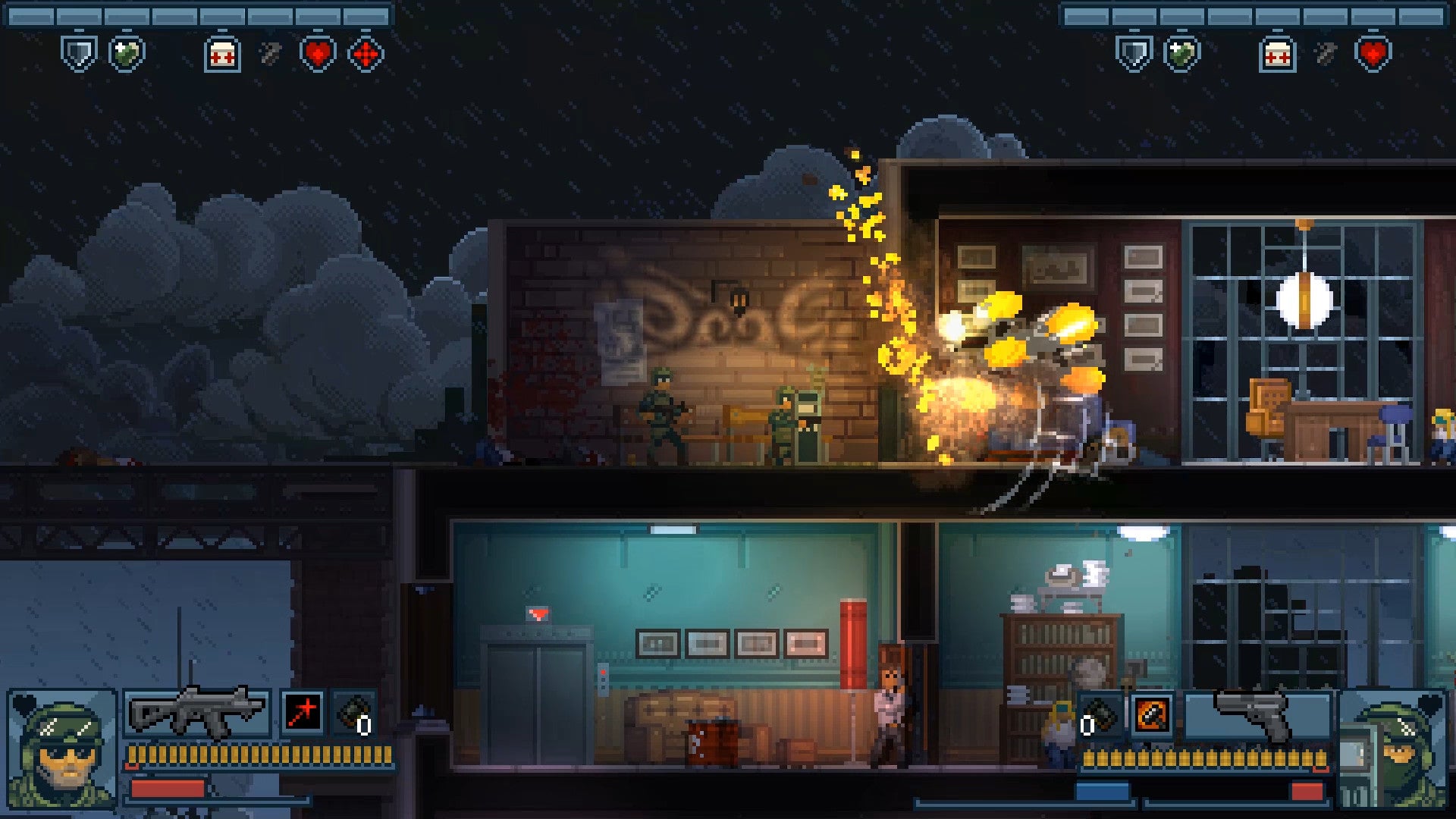 As such, the game occupies a unique niche that I wish had more inhabitants: a game with strong tactical gameplay that doesn’t put a grim veneer of ‘reality’ on it. Everything here sounds real: Agent Fergie — the FBI agent class, good with pistols and melee — can learn weaver stance, offering her better control while firing a pistol standing. The assault class, armed with short-barreled rifles and submachine guns, can learn a forward firing stance to reduce the recoil of their first shot. There’s an illusion of realism here, but mostly you’re charging from room to room, executing breaches with your co-op partner and diving through windows.

It’s fairly formulaic, outside of the more tactical focus. Between levels you can level up one of the five operator classes, each of which have different specialties. You can also outfit them with gear, whether that’s a bulletproof vest, flashbang grenades or even breaching charges. The customisation options are actually fairly light, with each class having a handful of different unlockable guns, often with one option which is objectively the strongest option for the class. Often, this gear lets you decide, subtly, which sort of operator you want to play. However, as the most efficient — and moral — way to play is to rescue hostages and clear out the criminals, you’ll often pick whichever gun does the most damage and the least recoil, to make sure it’s only bad folks who catch a bullet.

At this stage I’ve played through three quarters of the game with a single co-op partner, and while we started the game slowly picking apart these tactical puzzles room by room, as we got more familiar with our character’s capabilities and the game, we turned into tactical typhoons, assaulting rooms without remorse. Occasionally this lead to a lost hostage, and once or twice my eager door-opening led to my patient partner being killed — sorry! — but the fact the tempo of the game can be sped up or slowed down depending on your individual playstyle is a strong endorsement: if you want to take this like a tactical shooter or blast through it like Contra with an arrest warrant, Action Squad has you covered. 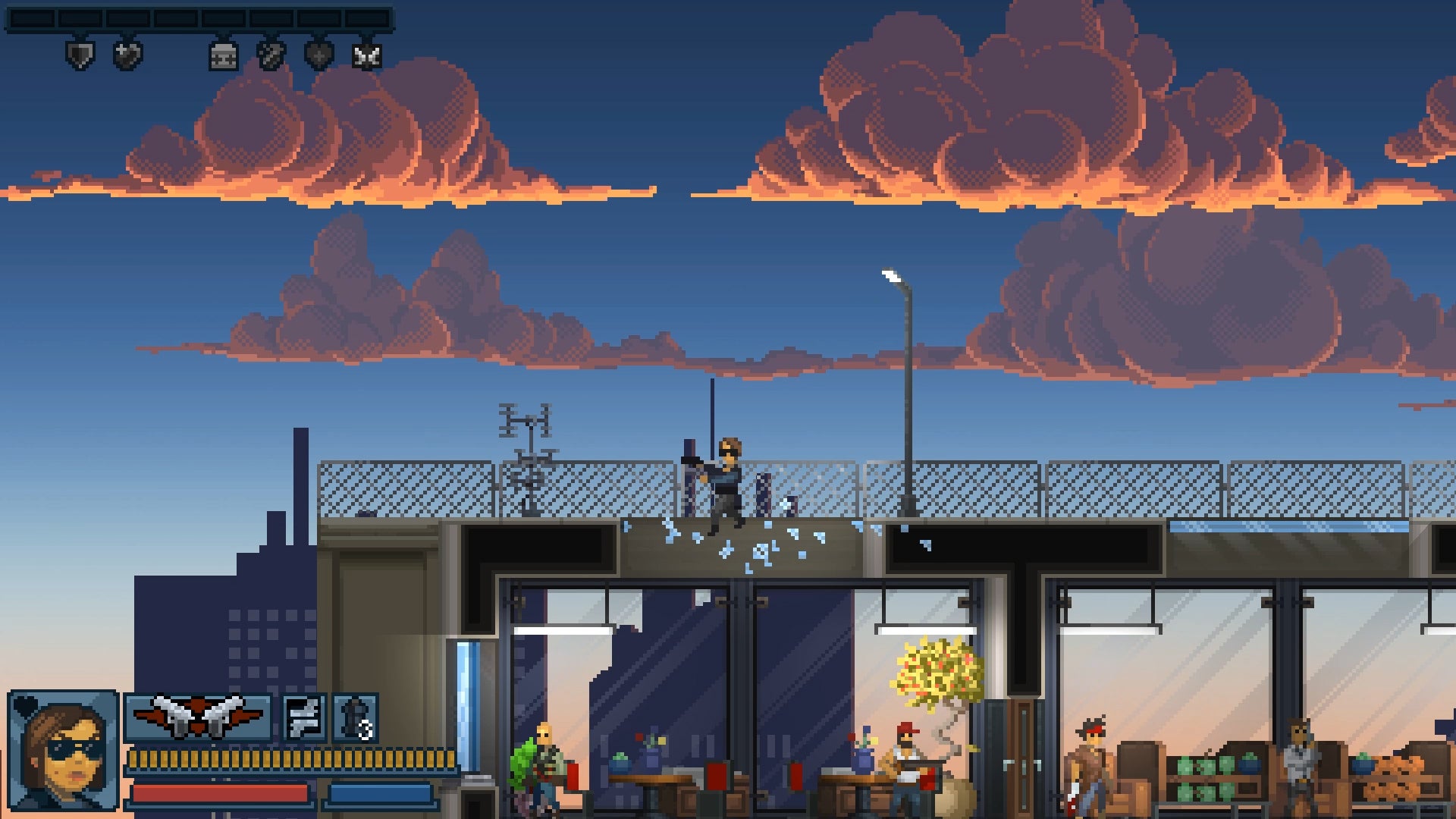 An addition to the action is your strategy bar, which fills as you rampage through the levels. The strategy bar allows you, with a press of a shoulder button, to quickly buy yourself a medkit, new grenades, an extra life, or even revive a dead teammate. It also gives you access to each character’s unique ultimate ability, whether this is an SMG for the shield user, or off-map sniper support. These abilties are rarely essential, but they add a little more depth to what’s going on, especially when you can slap on some replacement armour before breaching a tough room.

If I’ve been glowing so far, it’s because there’s something about the game that sits right with me. However, the limited customisation options do grate, and there’s not a lot of variety in the missions, so if the core loop of breaching room to room don’t work for you, it’ll get old long before the game’s generous selection of missions runs out. Most levels have you barrel through to kill criminals and rescue hostages, with the rare addition of scenarios where you have to arrest a high-profile target or defuse a bomb. The arrests are much the same, but the bombs put you on the back foot, with the constant bleep of a digital clock providing impetus for you to keep the tempo high before the entire level gets exploded.

Otherwise though, it’s much the same. Some of the gear you get to use doesn’t even seem worthwhile: frag grenades are pointless, because throwing a pineapple into the middle of a room filled with hostages doesn’t seem worthwhile. Instead, you’ll often stick with flashbang grenades because the best enemy is a discombobulated enemy, ready for you to dispatch them.

Door Kickers Action Squad is a great game, but outside of its generous helping of levels, it’s a little light on content. For the price, this is one of the better co-op titles I’ve played, and it offers a unique experience you’re not getting anywhere else. A surprising treat.