Love Doom? Have an HTC Vive or PlayStation VR? Then this one’s simple. Doom VFR will rock your world. It’s short and has a few annoying foibles, but it’s a whole new way to experience iD’s masterpiece in full-on virtual frickin’ reality. What more do you need to know?

Me and Doom go back a long way. I got hold of the original shareware demo back in 1993 and it absolutely blew my mind. There was an intensity to the experience unlike anything I’d played before, to the extent that I used to dream about travelling Doom’s demon-haunted spaces and sci-fi horror realms. Last year’s reboot had much of the same intensity, but VR takes it to a whole new level. Sure, it’s a little pixelated and blurry if you’re used to the crisp presentation on PC, but it’s so immersive – so in-your-face – that, at its best, it’s breathlessly exciting.

This isn’t a VR reworking in the style of Skyrim VR, but a kind of prequel or side story, starring a scientist caught in the demon assault on the Mars research laboratory. Unarmed and unprepared you soon suffer a ghastly fate, only to be resurrected in the body of a combat droid. It’s up to you to secure an accumulator that can create a chain reaction and close the gate to Hell. Only problem is that it’s in the hands of a prototype Cyberdemon, with a lot of obstacles – and hellspawn – standing in your way. 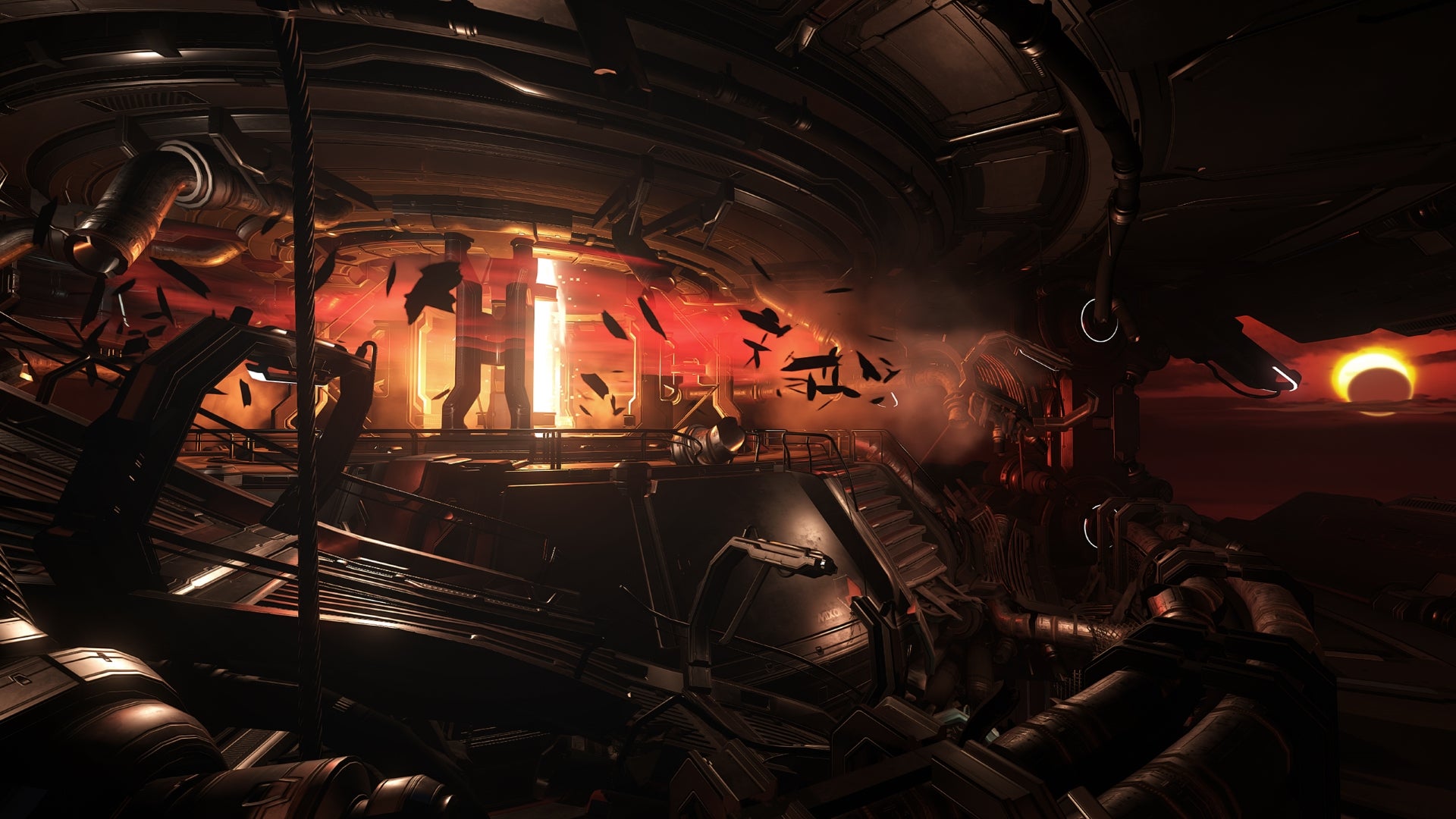 On PS4 the look and feel is broadly similar to the 2016 version, albeit with a reduction of texture detail and some of the more spectacular visual effects pulled out. The big change, however, is teleportation. Squeeze the L2 trigger or the trigger of your left Move controller, and a targeting arc appears to show your destination. Release and you teleport instantaneously. This is useful for zipping around the room, reaching platforms and avoiding charging demons, but it also plays a crucial role in combat.

Blast away at a baddy and stagger them, just like in Doom 2016, and they’ll waver on their feet and glow. This is your cue to teleport through them, instantly slaying them and scooping up health and ammo rewards. It’s a neat alternative to the Glory Kill mechanic, and one that ratchets up the thrills no end. Just like Doom 2016, Doom VFR is tight on health and ammo, while successive waves of spawning demons will soon wear down. If you want to survive, you need to get in close, keep moving and use your teleport to the max. 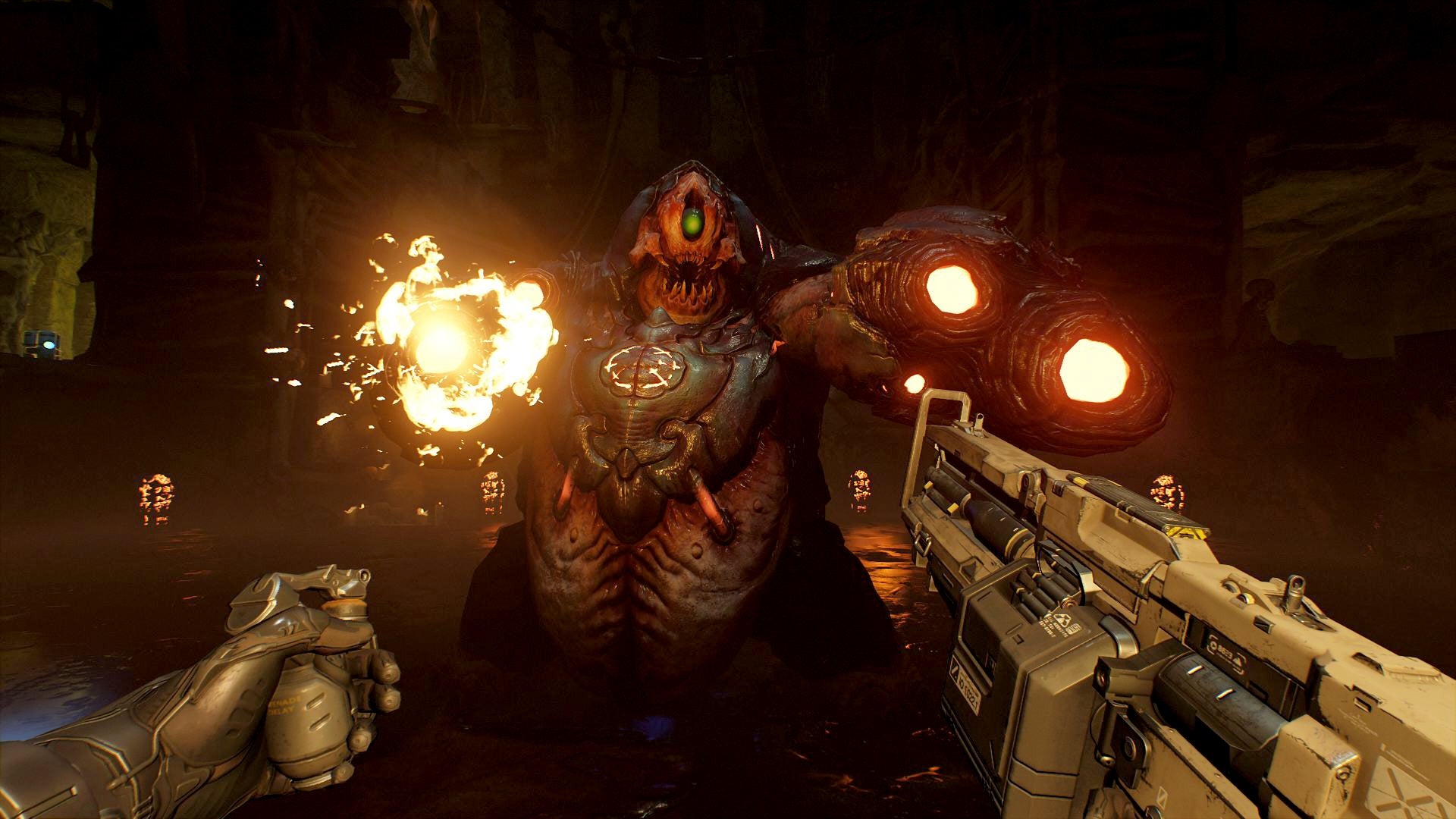 With the Move controllers, you’re limited to forwards and backwards boosts plus strafing boosts left and right, though these are mapped to the face buttons on one Move controller, and aren’t exactly intuitive. Instead, the game encourages you to spend your time teleporting with your left Move controller while shooting with the right.

Sadly, even with an instant turn-180-degrees function, this is a nightmare in the heat of battle, leaving you twisted up in knots, tripping over the headset cable, disoriented and occasionally facing in the wrong way entirely. You’ll notice because it’s suddenly obvious that the Eye camera can no longer see the Move controllers. This tends to result in death; not ideal.

Playing with the DualShock 4 is a little odd, in that your reticule stays central while your weapons look like they’ve been stapled to your head. All the same, it’s actually a much more natural way to play the game. You can aim precisely just by looking in the right direction and still move and rotate your view with the analogue sticks.

Move around at speed and start circle-strafing and you might experience some mild nausea, but even with that I found this the best way to play, easily completing sections where I’d really struggled with the Move controllers. And while your mileage may vary, I soon got used to the odd sensation; it feels like a natural extension of conventional FPS controls – even a little like playing with a keyboard and a mouse. Just expect a little discomfort and the odd minute where you might feel like you’re toppling over.

Once you find a scheme that clicks, Doom VFR is a big frickin’ joy to play. Sure, it’s really just a series of combat bubbles linked by exploration and light puzzle solving, but those bubbles are fantastic, iD repeating many of the tricks of the 2016 version in familiar locations, including the Argent Facility, the Necropolis, Titan’s Realm and the Lazarus Labs.

All your favourite monsters are here too, giving you the nearest you’ll (hopefully) ever get to going toe-to-toe with a Cacodemon or side-stepping charging ‘pinkies’. iD knows how to orchestrate waves of monsters, each bunch of hellspawn topped by the next until you know there’s something really big and horrible on its way. Use height, make space and make the most of your teleport, but you’ll still need to move and think fast to survive. 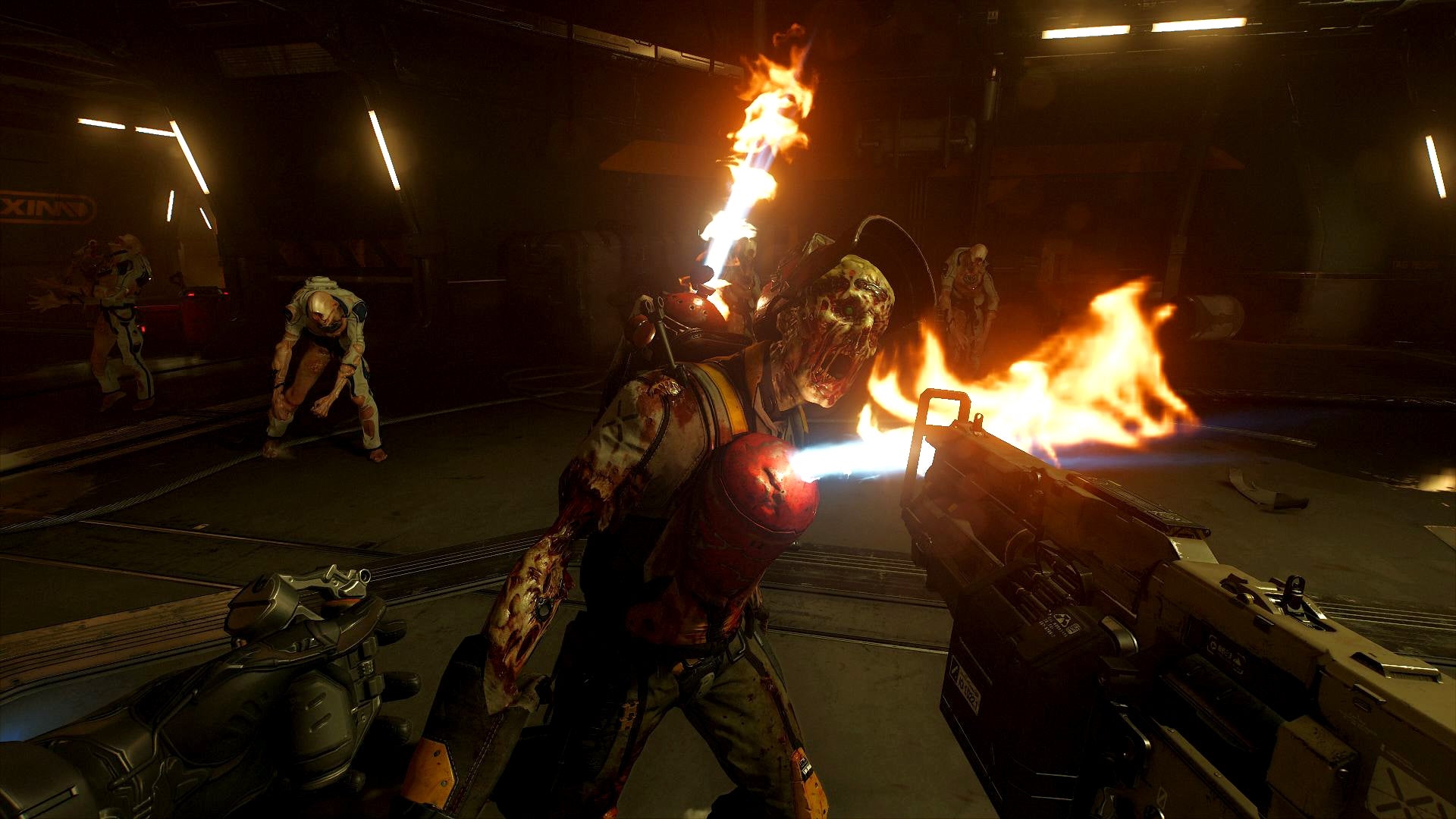 And what about those weapons? Who can resist circle-strafing Hellknights, letting loose with the super-shotgun, or giving Mancubi what for with a Gauss Gun beam? Each weapon has its own unlockable secondary fire mode, and each and every one packs a meaty punch. What’s more, Doom VFR brings some clever spins on old power-ups. Quad-damage and invulnerability do what you might expect, but Bezerk now gives you infinite insta-teleport kills before the timer runs out, clearing a room faster than just about anything bar the BFG. Don’t worry; the latter puts in an appearance as a dual-wield Big Frickin’ Grenade launcher.

Doom VFR is fairly short – you’ll probably clock four or five hours – and part of me wishes it was longer and a little more varied. I’d have liked more chance to explore the different neighbourhoods of Hell, and the few sections where you teleport to get around larger areas left me hankering for more. Yet it’s the kind of game you’ll want to return to on a higher difficulty level, while you can always replay earlier levels with your expanded loadout, or even try a few classic Doom levels in VFR style.

What’s more, I love the sheer insane intensity of the experience; it’s not a game built for two-hour sessions, but for shorter bursts of high-octane ultraviolence and demon-bursting gore. It’s actually too exhausting to play for much longer.

Doom VFR has a few control issues and won’t take you long to get through once, but if you’re a Doom fan with a compatible VR headset, it’s one of the best experiences around.

iD has bought Doom to VR without compromising the action or the hellspawn-slaying, nerve-wracking pace that makes Doom Doom, and a tiny bit of nausea here and there is a small price to pay. Do yourself a favour: Bring it on.