What is the Doogee Mix 2?

The Doogee Mix 2 is a Chinese phone. Like most Doogee models it appears to offer fantastic specs for the price, including a very large 6-inch screen, four cameras and a huge battery.

You get all the above for around $199, although those in the UK who want to avoid potential customs charges will find it sold closer to home for around £234.

This is a great handset for gamers and those who frequently stream video. However, it lacks the polish of big-name devices and doesn’t make the most of its hardware, particularly the cameras. 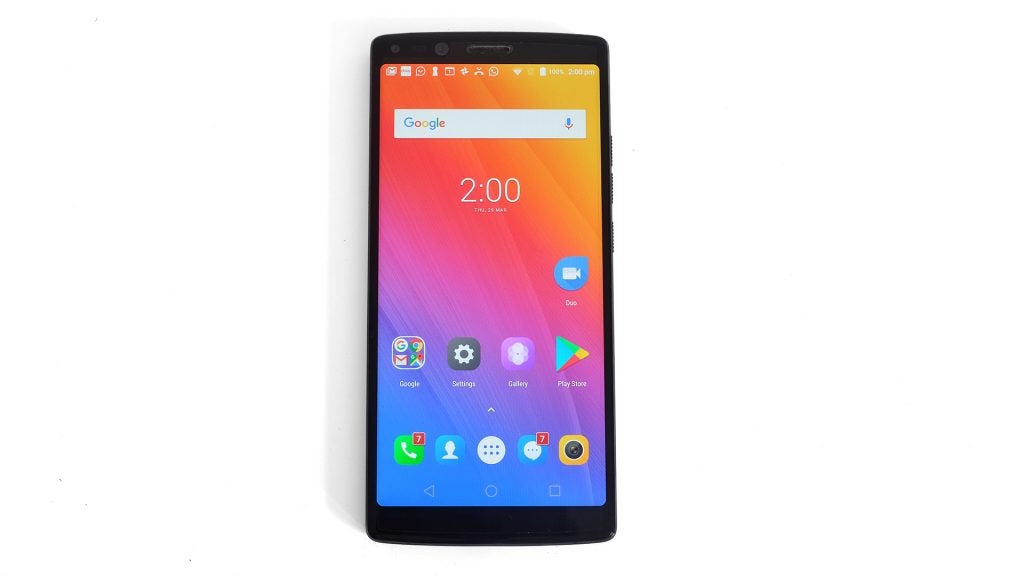 Those who ultimately end up buying the Doogee Mix 2 are likely to be disappointed when they open up its box. In the flesh, it looks rather different to the rendered images you see online.

Those images imply that the Mix 2 has almost no horizontal screen border, just like the Samsung Galaxy S8 and Galaxy S9. However, the reality is that there’s actually 2-3mm on each side of the display. I’m not so sure that Samsung or Sony would have got away with pulling such a trick. 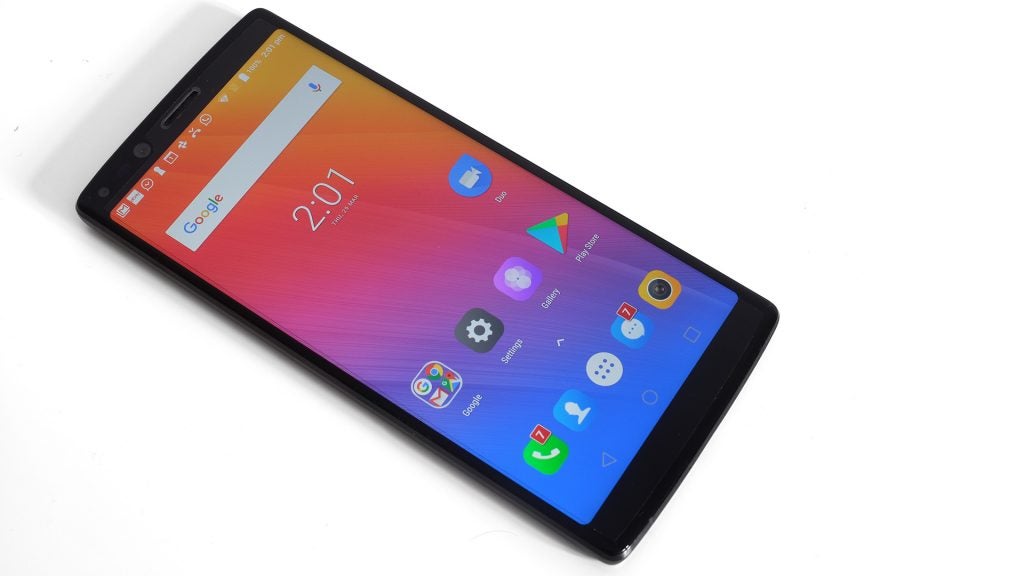 However, there’s still plenty to like about the Doogee Mix 2 design. It’s glass on the front and rear, with a 2.5D curved edge, and aluminium on the sides. This isn’t a particularly attractive phone, but it certainly isn’t made using cheap materials.

The other thing you’ll notice on first holding the Mix 2 is its weight. This is a heavy phone, weighing in at 239g. 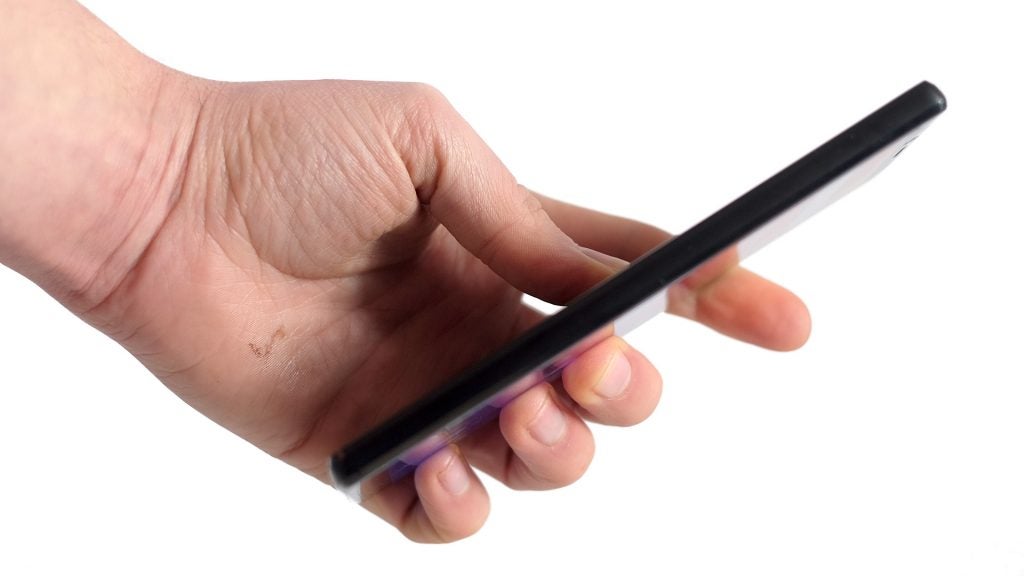 Normally, I get used to variations in a phone’s weight or size within about 12 hours. It took four days to become accustomed to the Mix 2’s heft, and it’s boxy shape doesn’t help matters either. However, it’s unlikely anyone will buy the Doogee Mix 2 expecting a dainty phone.

The screen on this device is one of the largest you’ll find at the price. And, following those complaints about the screen surround, much of the front of the device is actually taken up by screen since it has an 18:9 aspect. 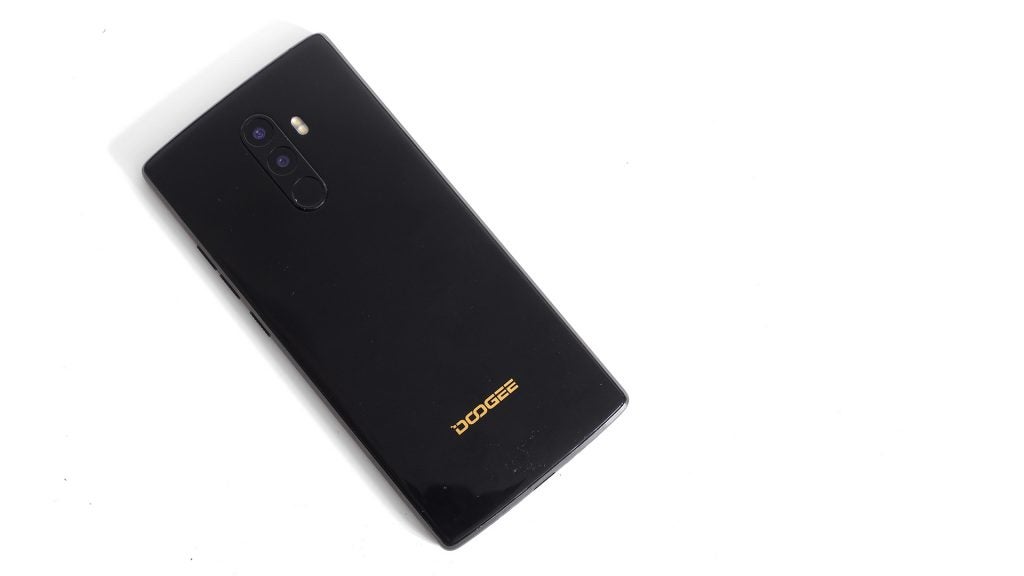 The Doogee Mix 2 also features a fingerprint scanner on the back. It’s well positioned and fairly fast in operation, but appears to be more picky about your finger’s position than most.

You’ll be surprised to discover 64GB of storage – not usual for this price; 32GB is the standard at £200/$200 – meaning there’s plenty of spare room for media and games.

It sounds huge, and appears so in person, but it’s really more a stretched 5.5-inch screen rather than the 6-inch screens of old. This isn’t a bad thing, since most folk find 6-inch 16:9 screens uncomfortably large. 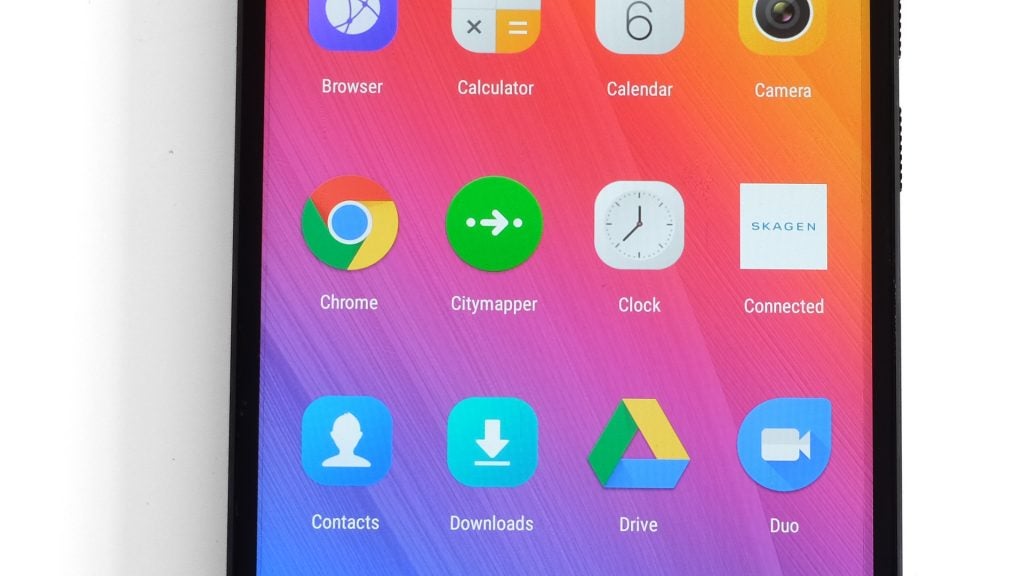 A screen such as this is superb for games in particular. For example, even  though YouTube videos tend to display black bars to the left and right of the image, you’re still left with an effective 5.5 inches of screen, which is enough to make videos look great.

There are a few issues, however. The colour temperature is quite cool, resulting in a slight blue skew, but this can be tweaked using the MiraVision part of the Settings menu. 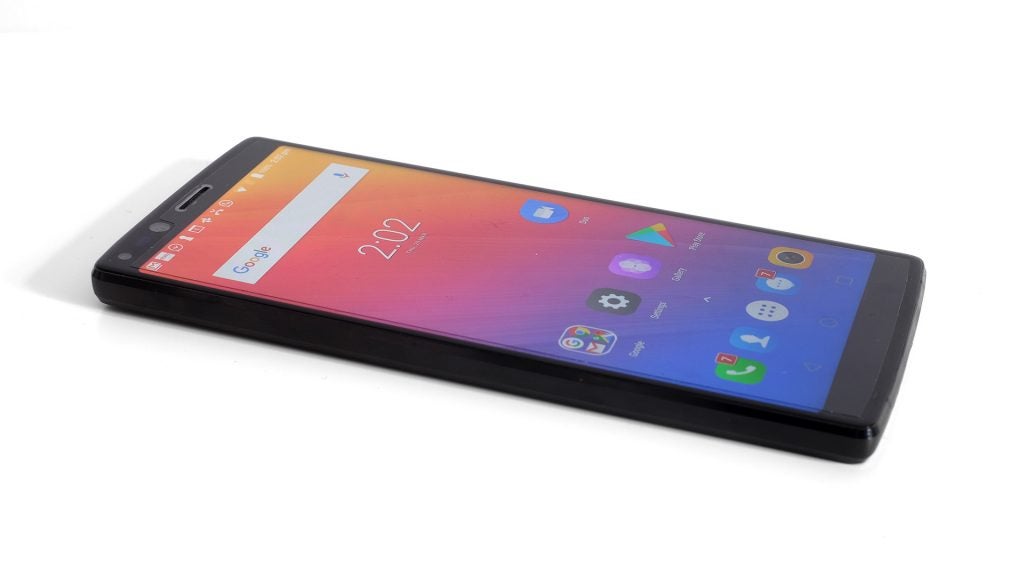 It lets you alter colour temperature, contrast and saturation, for example. Flick the colour temperature all the way over to the ‘warm’ side and you’ll achieve a look that’s  closer to that of a pro calibrated screen.

One area that isn’t so easily resolved is brightness. Sometimes the auto brightness setting is fine; at other times it makes the display far too bright. This is the sort of issue you tend to see in phones that haven’t been through quite enough rounds of software quality assurance.

The Doogee Mix 2 is a fairly new phone that runs a fairly old version of Android. It has Android 7.1.1, released in December 2016.

As such, it lacks Oreo features such as notification dots and the redesigned notifications style.

The biggest problem with the software doesn’t relate to the version of Android, however. Atop Android sits a MediaTek interface, which is designed to roughly follow Google’s style. There’s a vertical scrolling apps menu and no contentious extra ‘modules’ to get in the way. 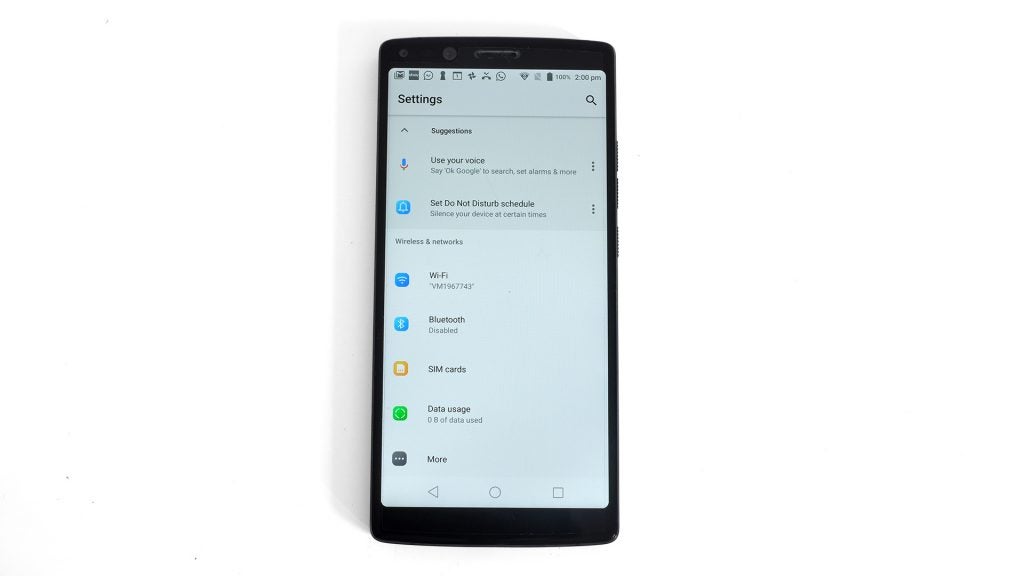 However, it makes very poor use of the Doogee Mix 2’s screen size. You can’t alter the number of rows of icons in the apps menu or on the homescreens, making the screen area appear wasted.

To be fair to Doogee, you can’t change these settings in the near-vanilla Android Moto G5S Plus either. But at least that phone uses five columns of apps menu icons. 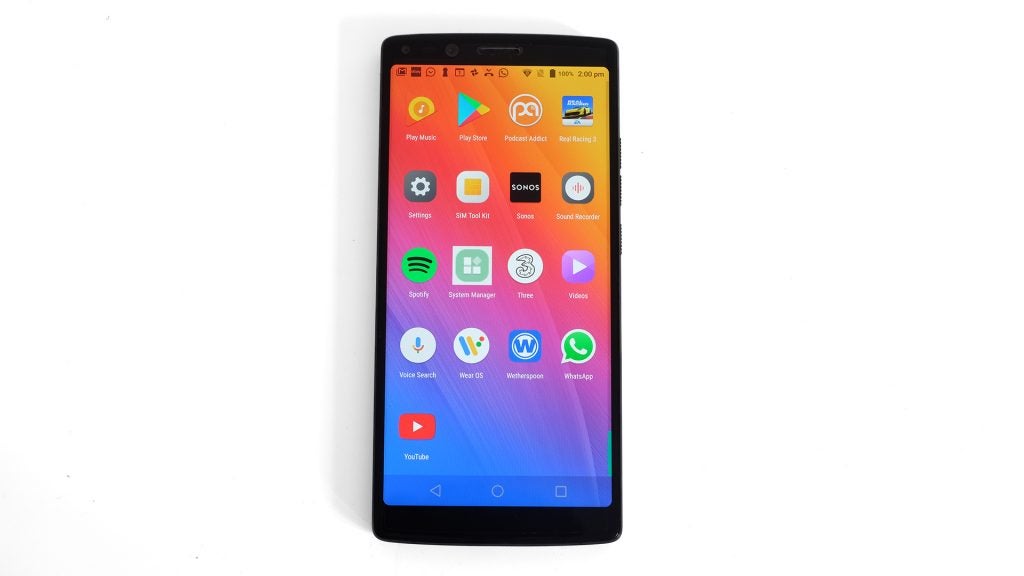 The Doogee Mix 2 uses a MediaTek Helio P25 processor. Like most mid-range processors of the moment, it has eight Cortex-A53 cores. Four are 2.6GHz performance cores, the other four are used when less power is needed. It scored 4032 points in Geekbench 4, roughly matching the Snapdragon 625 used by the Moto G5 Plus.

Seeing the ‘Helio’ brand mentioned initially caused worry. I’ve seen several phones with Helio chipsets that haven’t been able to run high-end games very well. Thankfully, the Doogee Mix 2 tackles titles such as Asphalt 8 and Real Racing 3 without issue. They run as smoothly as they do through a Snapdragon 625.

Speaker quality could be better, though. The sound is a little thin and the bottom-loaded grille is far too easy to block as you play. 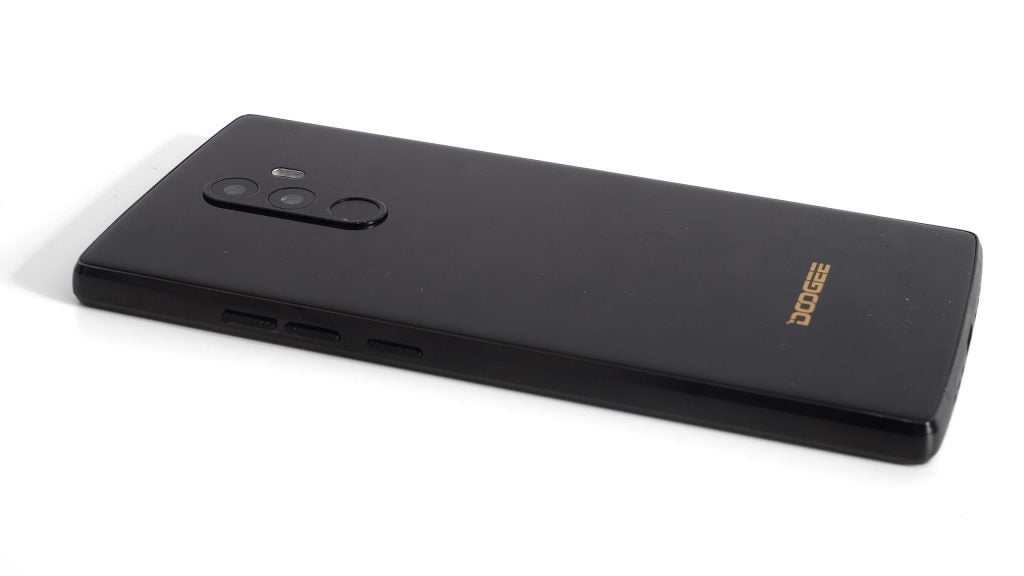 The dual-core Mali T880 GPU doesn’t have anywhere near as much power as a true high-end processor, but there are no distracting frame rate dips in the games I tried. Load times are longer than average, however, which is a shame.

There’s no obvious reason for this in the hardware. The 64GB storage writes at a respectable 197MB/sec and there’s a generous 6GB of RAM. However, it’s single-channel memory that appears to be of the DDR3, rather than the fast DDR4 variety.

The Doogee Mix 2’s performance is fine – but, ultimately, it doesn’t go above what we’d expect at the price. 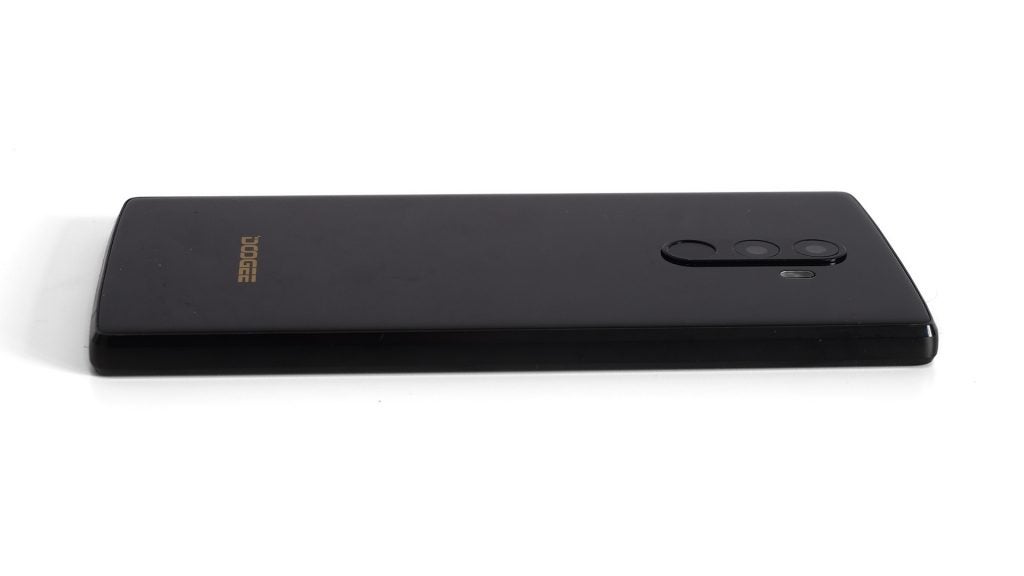 Doogee aims to wow us with the Mix 2 camera array. There are two cameras on the front and two on the back. On each side sits a normal lens and a zoomed-in unit for ‘lossless’ zooming.

It’s an excellent idea poorly executed, however. In many scenes, there’s barely any appreciable extra detail when using the zoom camera because it’s lower-resolution and neither lens is particularly sharp. It all seems a little pointless, although in well-lit scenes it is possible to notice some difference in terms of well-defined detail such as tree branches.

You can switch between 1x and 2x zoom using a button in the camera app. 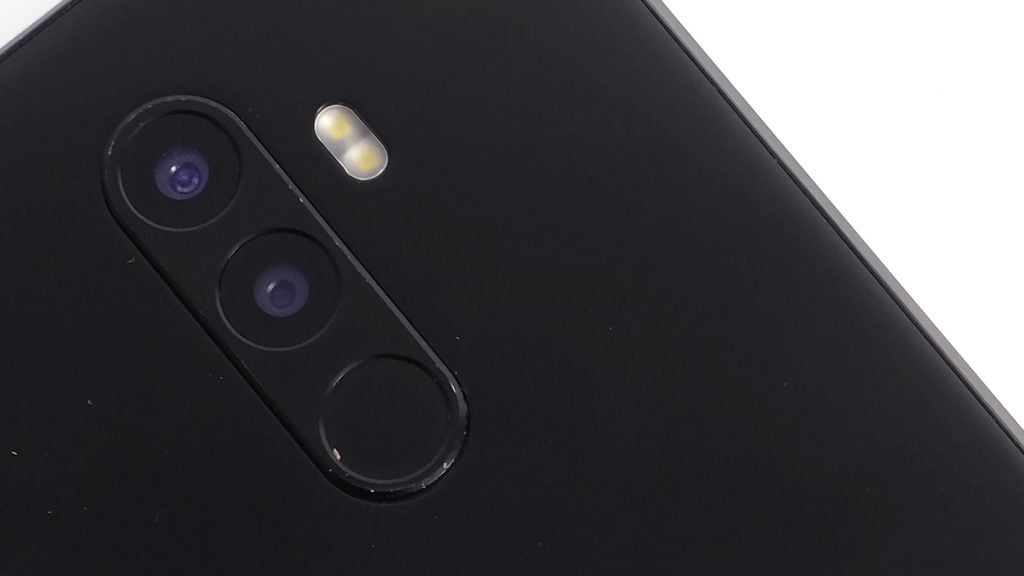 The front cameras aren’t much better: the zoomed-in view is really too “tight” to be useful. At arm’s length it only just about frames your face, because the normal camera has a fairly standard view rather than the ultra-wide one Doogee claims.

As with other elements of the phone, the cameras aren’t particularly well-thought-out.

Here’s a demo of the rear zoom in action: 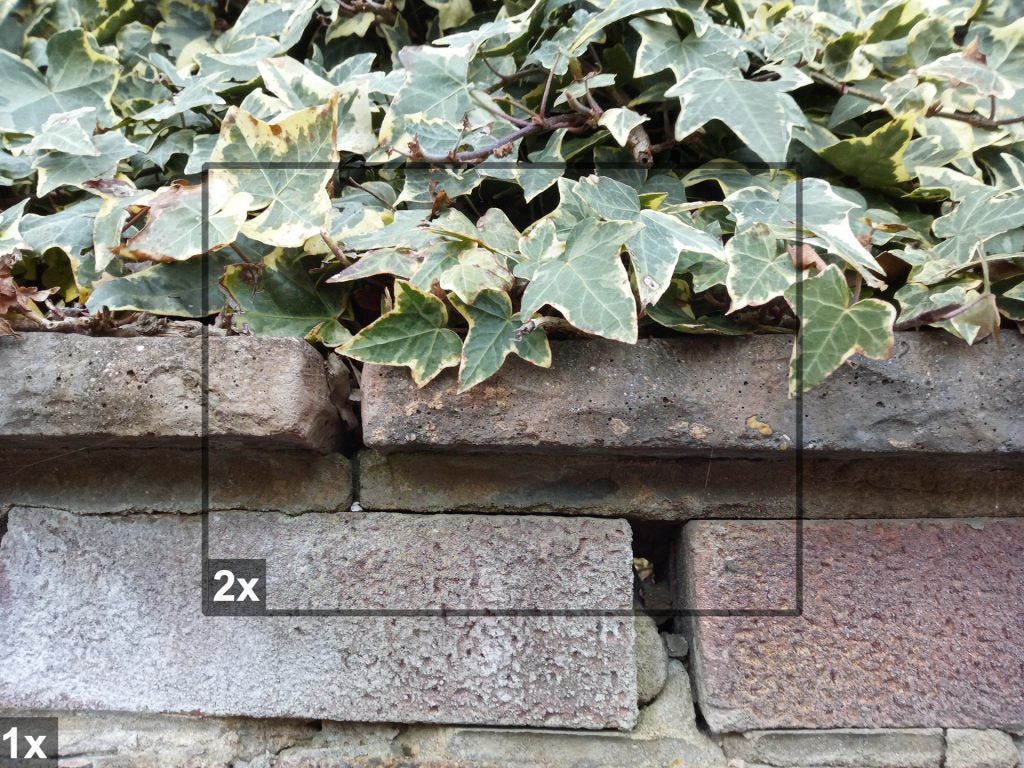 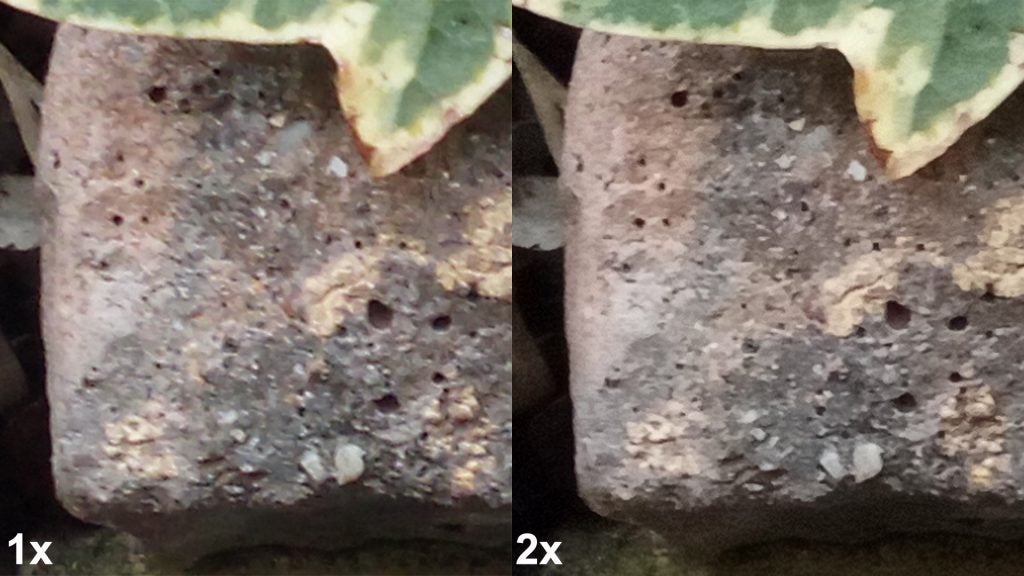 This tight crop shows the limited usefulness of the 2x zoom

The Mix 2’s main camera isn’t that great, either. It uses the OmniVision OV16880 sensor, a 16-megapixel chip with small, 1-micron sensor pixels.

And there’s little going on in the software to help it out. Image processing is poor, with no apparent Auto HDR optimisation and fine granular noise visible throughout images, even when shooting in good lighting.

You do get a separate HDR mode, which is manually engaged. However, it lacks subtlety. It’s like an HDR mode of a few years ago. Here are some sample shots: 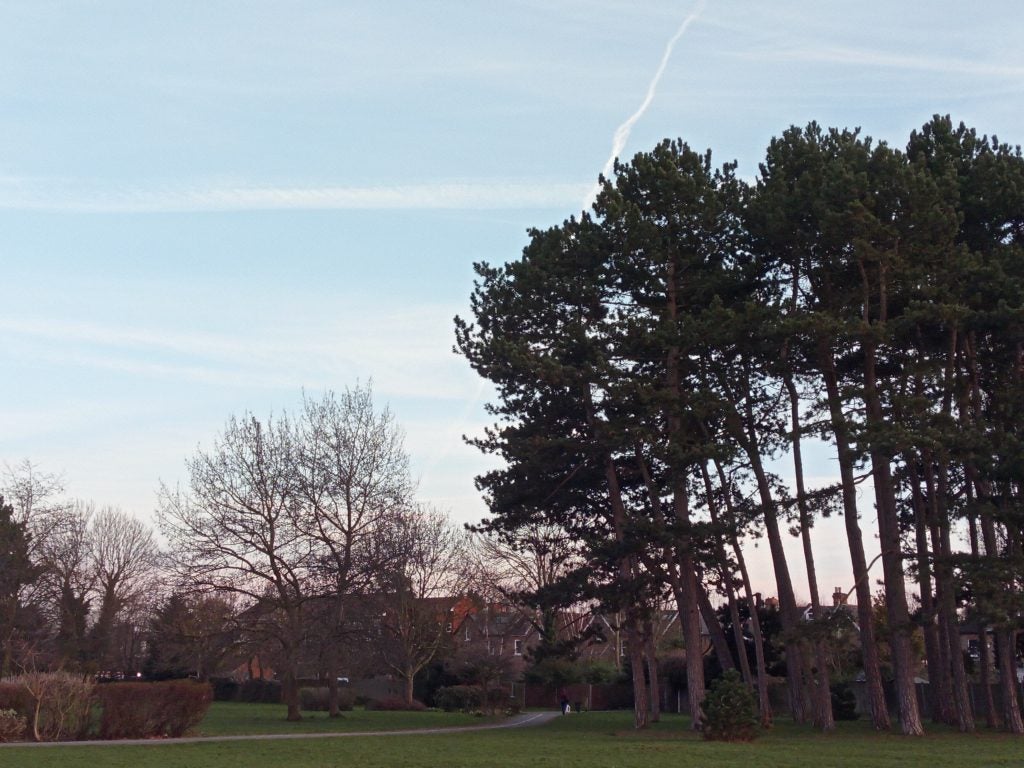 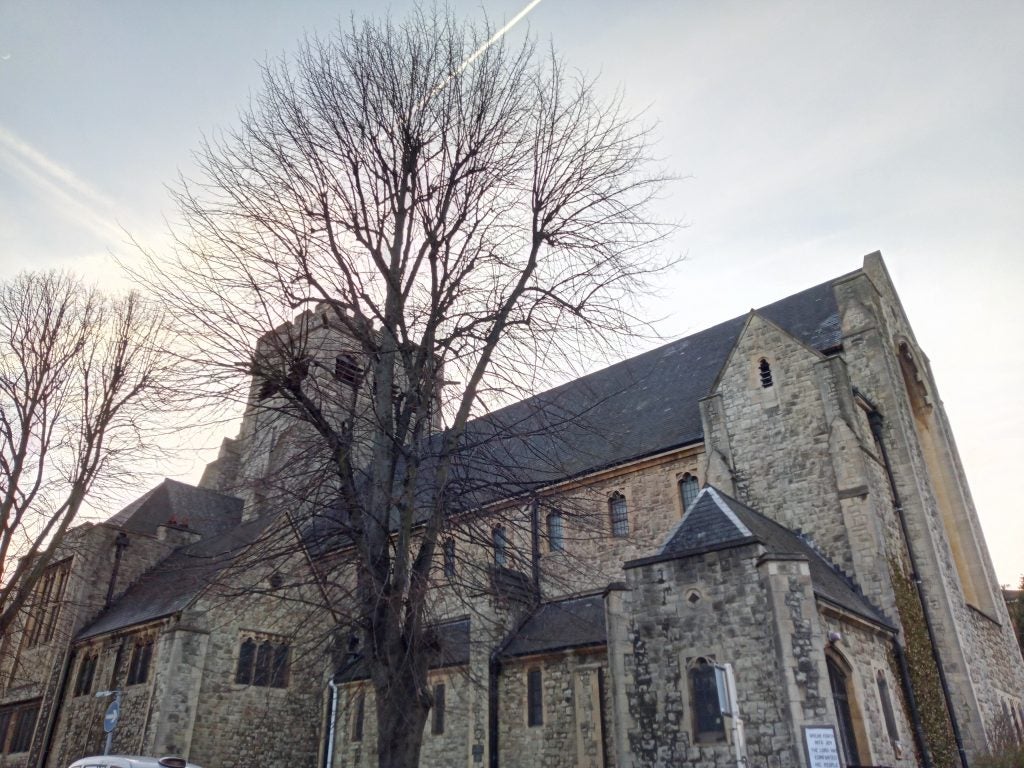 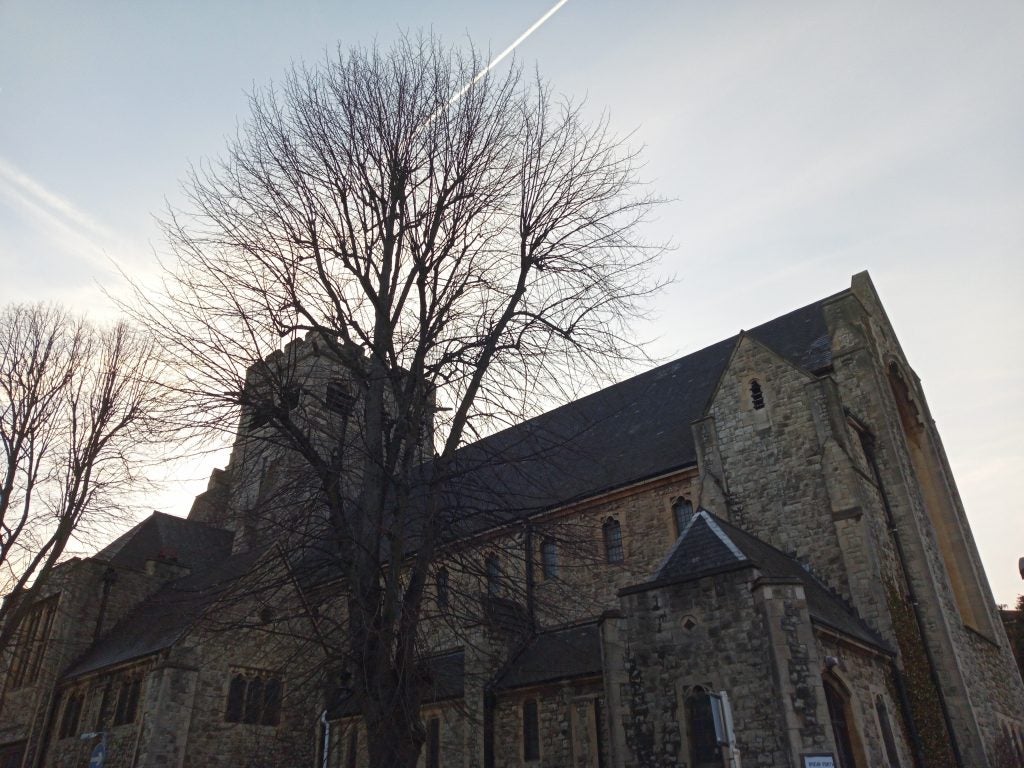 Here’s the same shot without HDR 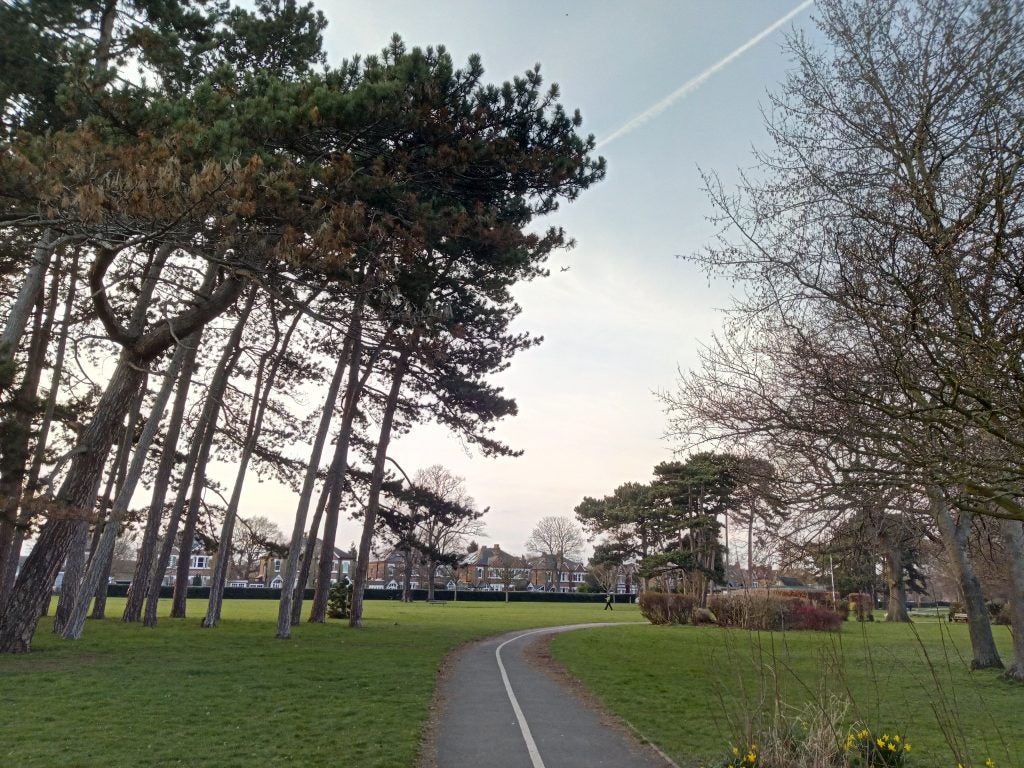 The Doogee Mix 2’s focusing is also problematic. You can shoot landscapes just fine, but when the subject is closer, the contrast detection autofocus is slow. On occasion, it doesn’t even lock on to the correct focus at the end of the process.

This is a flawed camera. However, you can still achieve some great-looking photos when shooting during the day with HDR engaged. And night image quality could be a lot worse. The Doogee Mix 2 retains a respectable amount of detail for a phone at the price.

1080p capture is the resolution limit for video. However, it’s the norm at this level. 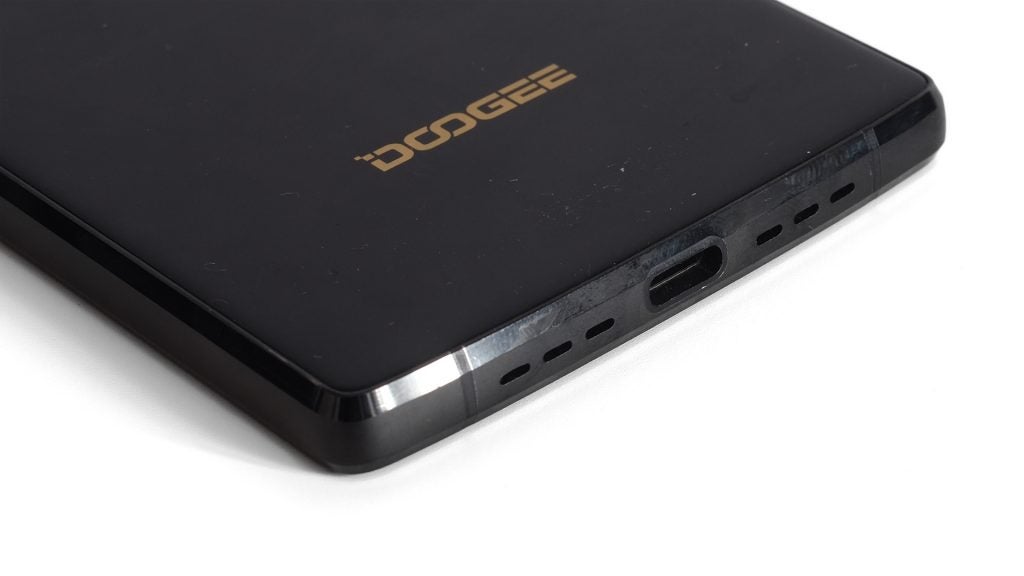 The Doogee Mix 2 is a phone you can hammer fairly comprehensively without it running out by early evening. By bedtime, I usually have a little over 45% charge remaining, after subjecting it to several hours of audio streaming, lots of WhatsApp and a few stints of web browsing.

Since this is a media-centric phone, you’re unlikely to get it to last two days. However, you will be able to partake in some YouTube watching on your way home from work with more confidence than you would, say, with the Moto G5S Plus.

Why buy the Doogee Mix 2?

The Doogee Mix 2 is a phone that delivers less than it appears to promise. It isn’t as “bezel-free” as it at first appears; its camera array is poorly designed; and the software could make much better use of the screen space.

The Doogee still has the benefit of a larger screen and a bigger battery. But you really have to care about the screen area for this phone to make sense.

This phone represents solid value, but some of Doogee’s claims ring hollow.