Available May 4 on Nintendo Switch

Nintendo’s move to re-release Wii U games on the Switch has given a second wind to the unsung heroes that didn’t get the love and attention they deserved first time round. With classics such as Hyrule Warriors, Bayonetta and even Captain Toad coming to the console, players will get to see how the company’s misstep still gave birth to some beautiful games.

Unfortunately, Donkey Kong Country: Tropical Freeze has hitched a ride on this wagon, despite not being particularly great upon first launch, four years ago.

There isn’t much new in the Nintendo Switch version of Tropical Freeze. Updated visuals look a little sharper, plus two-player is available thanks to the Joy-Con. An all-new ‘Funky Kong’ difficulty setting grants more hearts and infinite air underwater, as well as the option to skip a stage if it proves too difficult.

Unfortunately, players must choose their difficulty at the start of the game, and this can’t be changed, meaning if you reach a point of never-ending fury – which is likely – then you can’t decide to try out the more forgiving mode after the event. 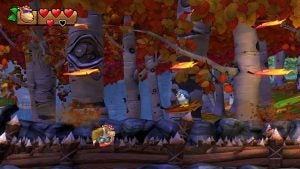 This makes it feel rather pointless. Essentially, you’re forced to either commit to having your hand held throughout, which only serves to simplify the whole game, or suffer through its most frustrating levels and mechanics because of a choice you made before experiencing a single level.

Outside of this, Donkey Kong Country: Tropical Freeze is very much as it was in 2014. The game remains a disjointed, frustrating, and often unfairly difficult 2D platformer that too often resorts to trial and error. Sadly, it fails to capture the magic of other titles of the same genre, and certainly fails to live up to the standard of other Nintendo exclusives.

Tropical Freeze’s biggest sin is inconsistency. When everything clicks it can feel great, with a solid sense of movement through its nicely presented levels. But too often it’s stunted by its own control scheme and bizarre mechanics, which deliberately hinder Donkey Kong’s movement and offer none of the flow you experience in New Super Mario Bros, or even more challenging experiences such as Super Meat Boy.

Donkey Kong is able to scamper around levels, but he isn’t able to run. Pressing a button while moving makes him roll (or when underwater, dive a bit faster), but you can’t hold the button to keep this momentum going. Instead, it only works for a couple of seconds before DK reverts back to his standard canter. This means timing jumps becomes trickier, and maintaining speed between jumps is more difficult too.

Learning to space a roll just before a jump, and not roll too soon so your momentum is lost, are crucial to surviving a level – alongside knowing about the “dead zones” that immediately follow a roll where inputs won’t work. Often you’ll fail, and there will many occasions when a mis-timed jump or misread button press will lead to a frustrating demise. 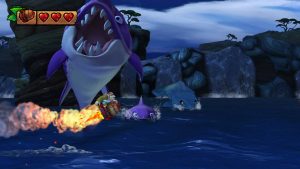 The problem is that rather than learning to overcome obstacles within a level, much of the time spent in DK’s jungle is spent figuring out how to get around a fiddly control scheme.

Inputs can feel unresponsive because of the bizarre roll system. Whereas other platformers have a basic sprint that allows you to zip around and suffer the consequences of your own over-exuberance, Tropical Freeze feels like it punishes you for not conforming to its bizarre rule set. As a result, what you get is an experience that by stripping away the ability to run actually takes away much of the fun.

Further exacerbating the situation is that the very same button used for rolling also makes DK slam his hands to the ground, which can break perishable floor tiles or make collectibles sprout from objects in the background. However, he only slams when stationary. Pressing the button with any forward push on the analogue stick will instead make the ape roll. There were plenty of times where I wanted him to do one action and instead did the other, including more than a few times where this meant I rolled off the edge of a platform to my death.

On the subject of difficulty, Tropical Freeze lacks the nuance of its contemporaries to the point where it can feel downright unfair, too. Often reverting to trial and error, there are many occasions where you’ll be well within your rights to feel that a particular death wasn’t your fault, especially during the on-rails sections and boss fights. The latter of those often devolves into an uninteresting cheap-fest that follows a familiar structure of the genre, but serves only to frustrate the player.

Bosses follow the same “do the same thing three times, boss changes tack, rinse and repeat three times until the boss dies” formula prevalent in most platformers, except that during the last round, the ante is upped so much that it’s exhausting. 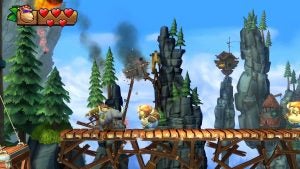 Again, this is another example of trial and error over a learning experience. On so many occasions there was simply nothing I could do but submit to the boss’ attack, hoping to find myself in a more fortunate position the next time round. This doesn’t make for an engaging experience; it makes for a tiresome one.

Tropical Freeze seems to borrow from old genre tropes while simultaneously misunderstanding them. While games such as Super Meat Boy – an eight-year-old game that still feels light years ahead of DKC: TF – offer bosses that will require far more attempts than those of Tropical Freeze, each death doesn’t feel beyond control; there’s always a reason the player perishes. In Donkey Kong Country, circumstance and fate will be your enemy on occasion, and that means the experience becomes annoying.

However, the game has redeeming qualities. Each Kong companion you recruit brings something different to the gameplay, as well as providing valuable additional hearts. The downside is that the barrels in which each Kong reside rotate between Dixie, Diddy and Cranky, with your choice being made the moment you pick up the barrel.

So, if you’re carrying Cranky and pick up the barrel while it has Diddy’s initials on the front, you have no choice but to swap them out. There’s no way to put the barrel down and keep Cranky, or simply replenish Cranky’s hearts. It’s an annoying quirk that again could be easily fixed if Tropical Freeze opted to use a few more inputs.

There’s a good variation of simple platform, underwater and on-rails levels, with a variation of each offered at a decent rhythm so you never feel like you’re playing one format for too long. 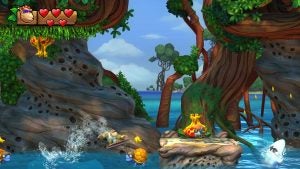 There’s also a good amount of enemy variety to keep things interesting. I do, however, wish more of DK’s other companions were used, with only Rambi the Rhinoceros brought along for the ride.

Considering all the amazing Wii U games still yet to come to the Nintendo Switch, I could have happily seen Donkey Kong Country: Tropical Freeze moved much further back in the queue. It’s simply an average 2D platformer that doesn’t deliver the level of fun or excitement you’d expect from a Nintendo-exclusive title – particularly one featuring some of the company’s most iconic mascots.