The first few minutes of Don’t Starve: Pocket Edition have much in common with the first couple of days at University.

Dropped off by your parents into a strange environment surrounded by typically hairy beasts (yes, everyone grows their first beard in college), suddenly you find yourself having to fend for yourself. No longer are your folks there to shovel food into your trap – you have to find your own grub, somehow heat it using a cooking device, and then spoon it into your mouth of your own accord.

Personally speaking, this was an especially scary time and it was touch and go as to whether I’d survive. Everything began to fall into place, however, when I discovered a magical kingdom just down the road called ‘ASDA’ and its ‘ready meals’ section. Suffice to say I haven’t looked back since, as my little pot belly will attest.

Life in Don’t Starve, however, is a little more complex. Rather than simply popping a macaroni cheese in the microwave, the world developer Klei Entertainment has created is devoid of macaroni. It’s even devoid of microwaves, would you believe it. Like that horrible feeling that sinks into your stomach when you realise you’ve left your flat without your mobile phone, Don’t Starve drops you into an environment seemingly out to get you at every turn, where every tool you use to stay alive has to be constructed by your own hands. 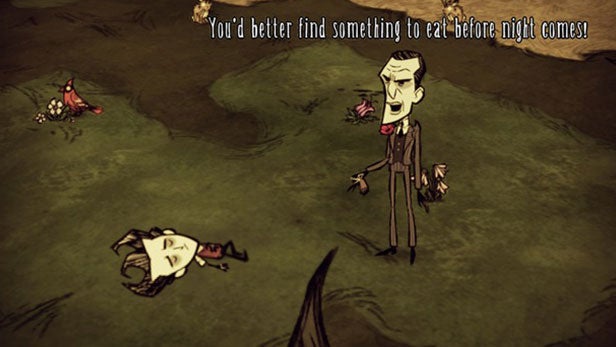 This serves as Don’t Starve’s challenge throughout but, quite perversely, it’s a hurdle that appears to be at its highest in those opening few moments. Presented with a world that seemingly has nothing to offer but flowers and the odd tuft of grass sprouting out of the earth, it’s your job to find some way of generating light and harvesting food before night draws in for the first time, lest your stay in your new inhospitable home be an especially short one.

Somewhat unusually for a mobile release (though entirely in tune with the game’s somewhat spiky nature), Don’t Starve gives you no advice whatsoever about how you achieve any of this, with success down to trying things to see what works. At a very basic level, simply tapping an object in range will cause you to interact with it, adding it to your arsenal of objects at the bottom of the screen. On the left are the ways you can interact with your world. Want to build a fire? You’ll need to collect the objects listed and away you go.

At some point or other, however, your run will likely come to and end, and success in Don’t Starve can be measured by just how long you can be resourceful for. It’s not only a question of eating to stay alive, but also staying safe so that what lurks in the dark doesn’t come out for your blood is another order of the day. 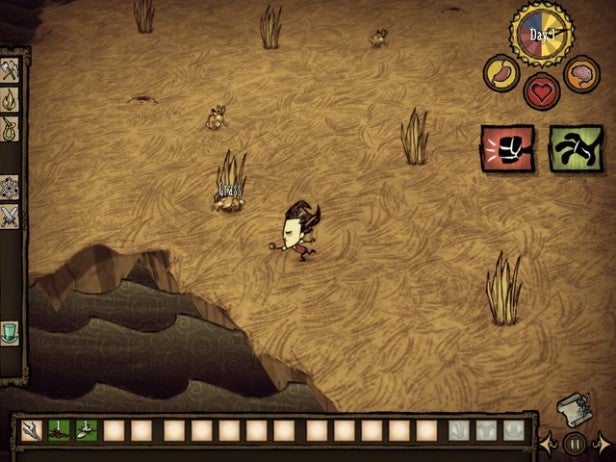 It’s the pressure that builds throughout your survival attempt, however, that is Don’t Starve’s signature. Whatever you’re doing, play is underlined by the slow, sinking feeling that your days – or, rather, seconds – or numbered and the end is nigh. It’s an atmosphere added to by the game’s slightly eerie, almost Monty Python style visuals that bring a comical edge to play, albeit in a rather dark style. Indeed, if you were to find a phrase that described Don’t Starve in a succinct fashion as possible, “odd and unnerving”  would probably do the trick.

In that respect, Don’t Starve: Pocket Edition is a distinctly unique prospect on mobile, with hand holding non existent and interaction intentionally limited. Yes, it has monsters out to eat you, and yes you’ll need to craft and fight to survive, but its open world delivery feels so alien to everything else on the platform that some folk will get it, and some simply won’t. For the former group, just like those first few days at university, there’s a whole lot here to explore, and much to learn.

Verdict
A unique open world experience on mobile, for some, Don’t Starve: Pocket Edition’s barren and unfriendly world will seem alien in every sense of the world, while for others it’ll seem like a refreshing change. Either way, the game’s black world makes for a memorable location and its hands off approach adds a genuine sense of peril to a game that’s, quite literally, out to get you.