On the non-combat side there’s good news and vaguely bad news. The bad? DmC is a fairly linear action game, and there’s little option to really explore the crumbling mansions and sinister facilities you’ll find inside. There are hardly any puzzles to solve and the focus is very much on the action. The good? Dante’s new weapons and capabilities make for some excellent platforming sections, with the new Dante easier to control and more responsive than the old. With abilities to grapple and swing from glowing blue hooks or grapple and tug glowing red ones, there’s more opportunity to interact with the environment, and chaining jumps, glides and grapples together is almost as much fun as chaining combos. 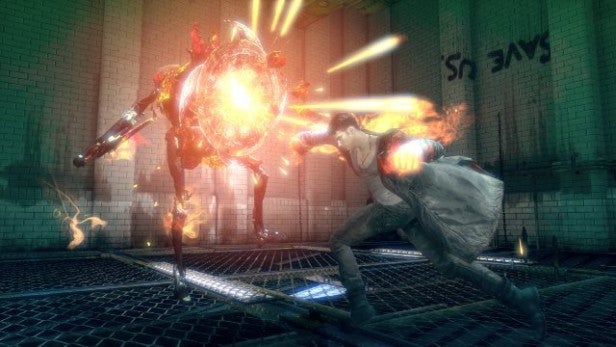 What’s more, Ninja Theory has remembered the other elements that made Devil May Cry work. Slain demons still release glowing red and green orbs in their death throes, and while DmC now uses a conventional checkpoint system, statues still allow you to spend those red orbs on health-giving stars and

The gameplay, then, is phenomenal. If you love Bayonetta and God of War III, then here’s a game to match them for action. Just as importantly, here’s a game that can meet them on sheer spectacle. DmC’s smartest conceit is that the world we know co-exists with the demonic plane of Limbo, where most of the action takes place. In Limbo all bets are off. Streets crack and explode. Evil goo bubbles up to the surface. Buildings distort and distances suddenly elongate. Evil slogans and taunts appear superimposed on the architecture, and posters and ads take a sinister new turn. 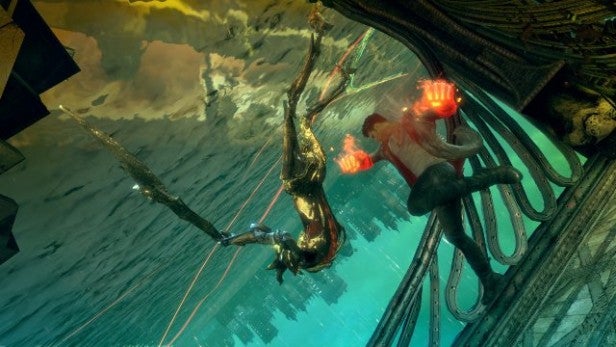 It’s a dazzling effect, and DmC makes the most of it with frantic dashes through a shattered city skyline and a surreal excursion through a demon disco. One or two of the bosses lack Capcom’s monstrous imagination, but others fit in exactly with the best from Resident Evil and Devil May Cry. With Heavenly Sword and Enslaved Ninja Theory delivered visually impressive games with stunning close-up character animation, but with DmC it has surpassed itself. Technically and artistically it’s as good as anything in the genre.

At roughly twelve hours in length, the game goes on for just the right amount of time, and there’s no tacked on multiplayer option. Instead, you have options to play again at a higher difficulty level and boost your rankings and status on world leaderboards by fighting more stylishly or discovering more of the game’s collectibles. There are special stages to unlock and complete, most requiring some impressive feat of combat, and once you’ve polished off the game once, you can start again with a remixed version, played normally or with fiendishly hardcore no death conditions. This is the kind of stuff that Capcom’s biggest fans demand. As with so much else in DmC, Ninja Theory hasn’t left them wanting, and there’s more DLC on the way. 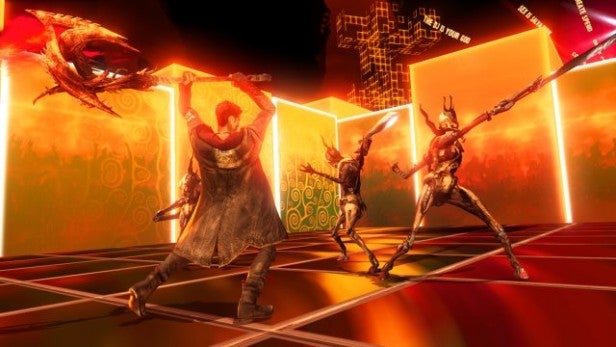 We’re sure that some Devil May Cry fans won’t like the new direction. DmC hasn’t got the camp qualities or bonkers baroque stylings of the Japanese original, and just as not everyone has taken to Daniel Craig’s Bond, so not everyone will take to the new, younger Dante. Some of the narrative’s attempts at characterisation and drama don’t quite come off – though many do – and there are some signs of a lack of ideas towards the end. Yet if you notice these minor flaws, it’s only because the overall quality level is so high. We didn’t expect it and we didn’t see it coming, but DmC is an exceptional action game. Miss it at peril to your soul.

A reboot of Batman Begins and Casino Royale quality, which manages to be both the best game in the Devil May Cry series and Ninja Theory’s finest effort to date. While some of the baroque weirdness and high-camp style of the original games has been lost in translation, DmC delivers a great world, an interesting story, fantastic visuals and combat to match Bayonetta or God of War. Hack and slash action games just don’t get any better than this.