Available on Xbox One (reviewed), PS4
Ninja Theory’s 2013 Devil May Cry reboot was controversial, but if you could look beyond its precocious young Dante and his cropped dark hair, you would find one of the slickest, smartest brawlers of recent years. DmC: Definitive Edition does the bare minimum to deserve its suffix, but the quality of the underlying game hasn’t changed. It’s neither as bonkers nor as brilliant as the majestic Bayonetta 2, but it’s the closest you’ll get on PS4 or Xbox One.

Graphically speaking, this is more of a full HD polish than a radical overhaul. It’s crisper, cleaner and smoother at a 60fps 1080p, but neither the upscaled models, flat lighting or medium-resolution textures are going to convince you that you’re playing a native next-gen game. In fact, it’s pretty clear that this is basically the PC version running on a console, with occasional tearing and the gentlest of frame rate dips on Xbox One. 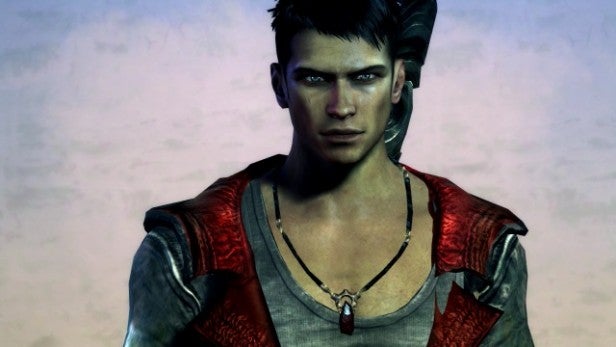 Oddly, this lack of high-res textures or higher detail models isn’t as big an issue as you might think. On release, DmC looked great because it had excellent art design, and that still shines through here. Despite their rubbery-looking skin, the characters and monsters are believable and full of personality, with Ninja Theory serving up Capcom’s signature creature style with its own shock twists. DmC also did a fantastic job of mixing real-world and demon world environments, flipping instantly from recognisable scenery to some hell-spawned, twisted variant, or frequently mixing both within the same frame. From its baroque-meets-gothic architecture to the way demonic elements literally shatter or tear their way through the human world, DmC can still dazzle even now.

The gameplay holds up even better. Like the original Devil May Cry quartet or Platinum’s two Bayonetta games, it’s primarily a brawler with elements of action-adventure, and one that asks you to combine melee weapons and ranged weapons in demon-crushing combos. The combat system isn’t quite as ingenious or skillful as Bayonetta’s, but there’s a power and flexibility to its combo system, and some real smarts in the way you combine different weapons, instantly accessible using trigger modifiers, to grab enemies, smash their defences or go in for the kill. With multiple baddies to tackle at any one time, there’s a real pace and ferocity to the action and a great sense of weight to every blow. 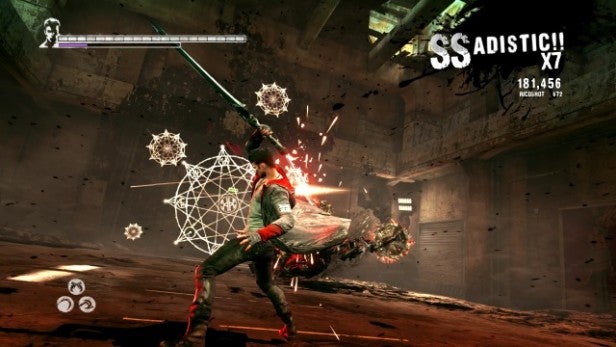 Some aspects fall flat, with some rather laboured – though spectacular – platforming sections and scripted sequences, but for the most part, DmC is as intense and absorbing a brawler as you could hope for. The worst thing you can say about it is that its attempts to be young, hip, shocking and snarky sometimes reek of a team that’s trying too hard – with a thumping nu-metal soundtrack to match. But do you know what? We’d rather have a distinctive effort that tries too hard than a tiresome, deferential retread of Dante’s PS2-era glories, delivered without the absurd, post-modern wit of the original three games.

What else does this Definitive Edition bring to the party? Well, this is basically the most comprehensive version of DmC imaginable, with all the DLC and extras added and unlocked. Those who hate new Dante can play through the whole game with a version modified to look like the old Dante – though the costume disappears during some key cut-scenes and never looks anything more than the same kid draped in Dante’s red coat and a wig. The Vergil’s Downfall DLC episode, exploring the back-story of Dante’s brother, also puts in an appearance, expanding and adding a little extra depth to the saga, even if it feels a little like a watered-down version of the main game. Still, throw in new Vergil themed Bloody Palace combat challenges, and there’s plenty to keep fans entertained. 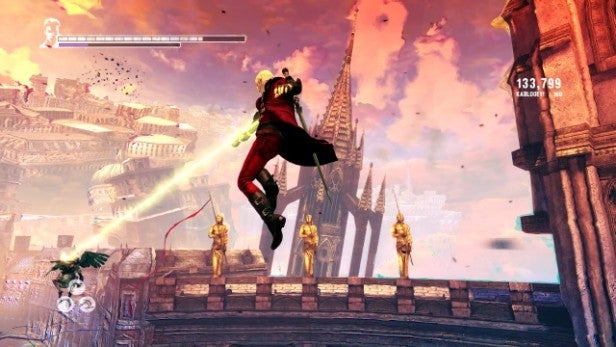 Beyond this, we get new Hardcore and Gods Must Die difficulty modes, so that those who find Dante Must Die a walkover (not us) can have something to get their teeth into. Yet perhaps the most pervasive addition is a turbo mode, switchable at each mission select screen, which speeds the action up by 20% throughout the game. DmC was never a slow or stodgy game, but with turbo mode engaged it feels faster and more exciting than ever before, coming close to Bayonetta in the sheer intensity of its action. Once you switch it on, it’s hard to switch it off, and old-school Devil May Cry fans may end up thinking that it makes DmC feel like it should have in the first place.

If you didn’t play or chose to snub DmC on its first release, this is a great chance to sort that out; it might not look as good as Assassin’s Creed: Unity or The Order: 1886, but it’s a formidable, ferocious brawler with plenty of style. If you’ve played it already, it’s a harder sell. As with so many of these Definitive Edition updates it’s questionable whether there’s enough new or fresh stuff here for a double dip, particularly given the lack of previously unavailable new content or significant graphical enhancements. Still, if you loved DmC on first release then turbo mode and the new difficulty levels might still make it worth your while.

Verdict
Neither the visual enhancements nor the added content transform DmC, but this is the best version available of a cracking and under-appreciated action game, with tweaks to bring it more in line with what Devil May Cry fans loved about the earlier chapters. As an action adventure/dark fantasy brawler it comes second only to Bayonetta 2, and it’s the closest thing you’ll find on PS4 and Xbox One.