What is the DJI Ronin-S?

The Ronin-S is DJI’s new single-grip stabiliser for DSLR and compact system cameras. It’s designed to help videographers, YouTubers and filmmakers of all levels capture smooth video pans, tracking shots and dollies on the move. You can also use it for moving time-lapse and panning videos, or multi-frame panoramic photos when stood on its own integrated tripod.

The standard tripod mount means the Ronin-S’s 3-axis gimbal can accommodate almost all system cameras up to a weight of 3.6kg. It features built-in controls, allowing the user to pull focus and stop/start recording on a handful of compatible cameras. Its accessory mounts support optional add-ons such as microphones, LED lights and external monitors too.

A companion mobile app also lets you adjust performance and motion speed, creating up to three user presets that can be quickly cycled through by tapping a button on the handle. Holding down the button, meanwhile, engages a fast-reacting Sport Mode. 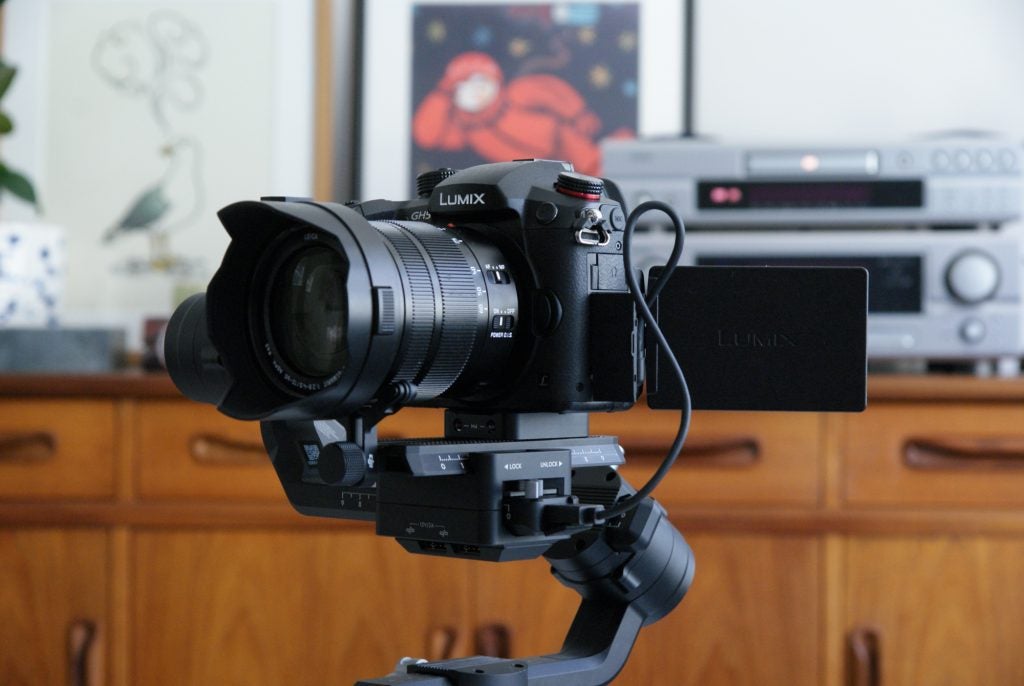 The Ronin-S impressed us before we even saw it, coming packaged in a tough, lightweight polystyrene carry case that provides ample protection for all its components. Closing via a neat twisting clasp, it’s a nice touch from DJI that means buyers won’t have to immediately shell out more cash for an optional protective case.

The product itself comes in three main parts: the 3-axis gimbal, a handle/battery, and a handle extension that unfolds to form a tripod. These fit together in quick, tool-free fashion, but once you’ve mounted your camera (after first fitting it to a quick-release plate via its tripod mount) you’ll need to make a few tweaks to the gimbal to get the balance right across various axes.

How you do so is adequately outlined in the included quick start guide, but beginners may find that consulting DJI’s online video tutorials helps them get to grips with the balancing basics quicker.

We suspect that once you’ve owned and used the Ronin-S for a while, this balancing process – which needs to be performed every time you change the camera, or the lens on the camera – will become second nature. However, we found it tricky to remember the correct order when re-assembling the gimbal while out and about, without the guide to hand.

Again, you don’t need tools for this: most of the gimbal adjustments are secured using levers, while the mounting plate attaches to your camera via a screw that can be turned with a small coin, if you don’t have a flathead screwdriver to hand. 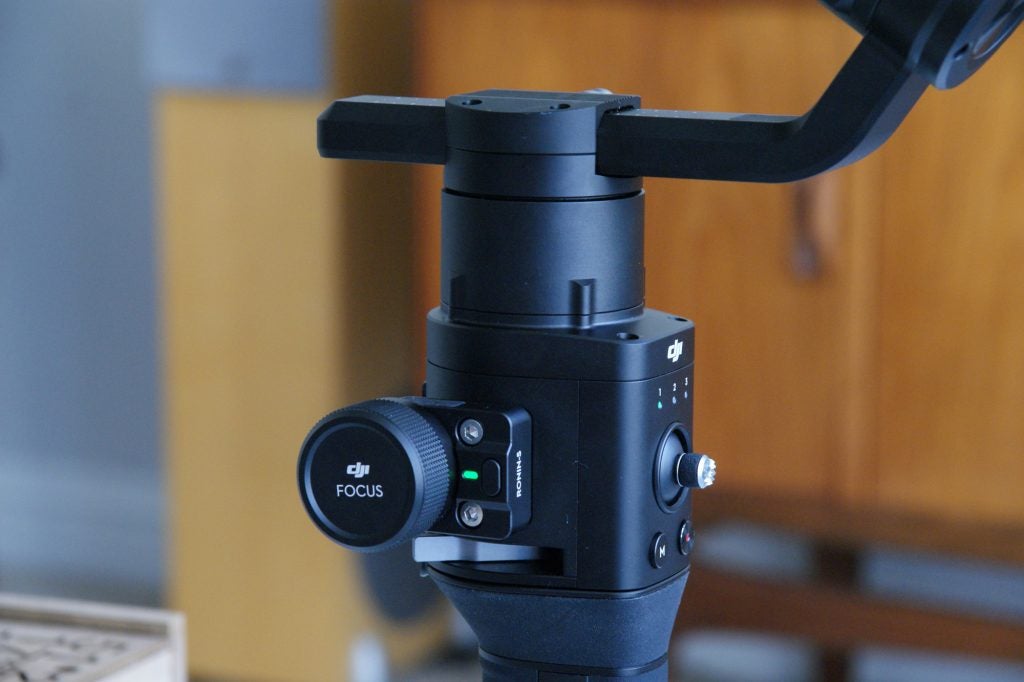 Being mostly made of metal, the Ronin-S is sturdy and solid. The downside to this is that it’s heavy. A weight of 1.8kg might not sound much, but you’ll be adding at least a camera and lens’ weight to that, plus holding it up at sometimes awkward angles.

We found that resting the handle extension on a thigh helped relieve the strain during lengthy sessions, but expect your arms to get a nice free workout while you’re shooting. If you’re shooting with heavier cameras, or are planning on mounting accessories such as an external monitor on the gimbal, you might be better off with a two-handed gimbal such as DJI’s own Ronin-M.

One clever point of note about the gimbal design is the angled roll motor, offset to allow you to see the camera’s rear screen – at least most of the time. Most gimbals put the roll motor right behind the camera, blocking your view.

The handle and extension are covered in a rubber-textured material for added grip, and the exterior parts of the product appear to be weatherproof. DJI’s promos show the Ronin-S being used in a heavy snow shower, even if the company doesn’t make any specific claims to waterproofing.

However, the ports aren’t water- or dust-proof, so you should ensure that the rubber covers are in place when shooting in inclement conditions. With its strong motors and DJI’s always-impressive stabilisation algorithm, the Ronin-S does a fantastic job of keeping your camera stable. The exact speed with which the gimbal shifts the camera depends on your personal settings (input via the app), but suffice to say you can wave it around to an almost comical degree and still end up with stable, smooth footage.

In general use, the Ronin-S will move the camera to follow the movements of the gimbal: point it up, left, right or down and the camera will follow smoothly, allowing you to follow and track subjects. You can increase its sensitivity and speed instantly by holding the M button and engaging Sport Mode.

Alternatively, holding down the trigger at the front keeps the camera pointed in its current direction, no matter where the gimbal moves. Tapping it twice re-centres the camera, and tapping three times flips it round towards the user (aka “selfie mode”). A thumb joystick on the back of the handle can be used to make manual camera moves, if more precision is required. 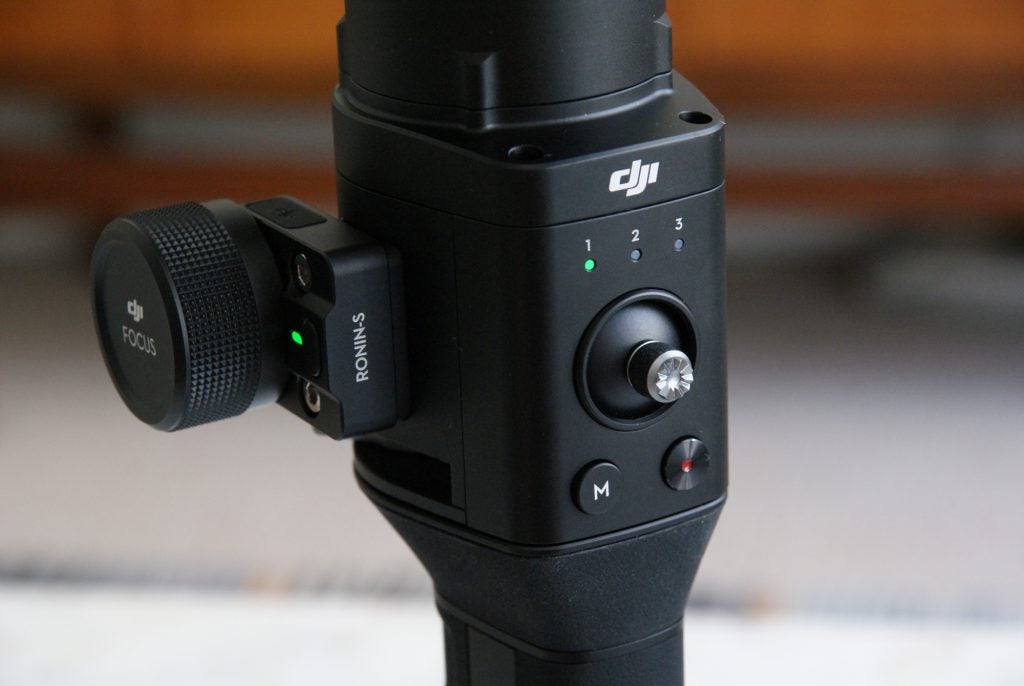 You can hold the gimbal in three main ways: normal, flashlight and underslung. This provides for superb flexibility; it’s easy to hold it high, at waist level or very low to the ground. The relatively small size increases that further by allowing you to get it into positions two-handed gimbals couldn’t manage.

We mounted a Panasonic GH5S for the purposes of this review – and, right now, this camera and the original GH5 are the most closely compatible with the Ronin-S.

With the included MCC cable, you can use the Ronin-S’s on-board controls to take photos, start/stop video recording and pull manual focus (depending on the lens). For users of the Canon 5D Mark III, 5D Mark IV and 6D Mark II, Nikon D850, and Sony A7S II and Sony A6300, only stop/start recording and photo capture is supported – and for the Sony cameras that requires an awkward IR blaster setup. Other cameras aren’t officially supported at all, but it does seem like firmware updates will increase the list before long. Watch this space.

Something that doesn’t disappoint is battery life, which DJI claims lasts up to 12 hours per charge. That seems about right: in all our time with the Ronin-S, the battery never dipped below two of its four indicator bars. The battery charges via the handle’s USB-C port, and it takes around 2hrs 15mins for a full top-up. 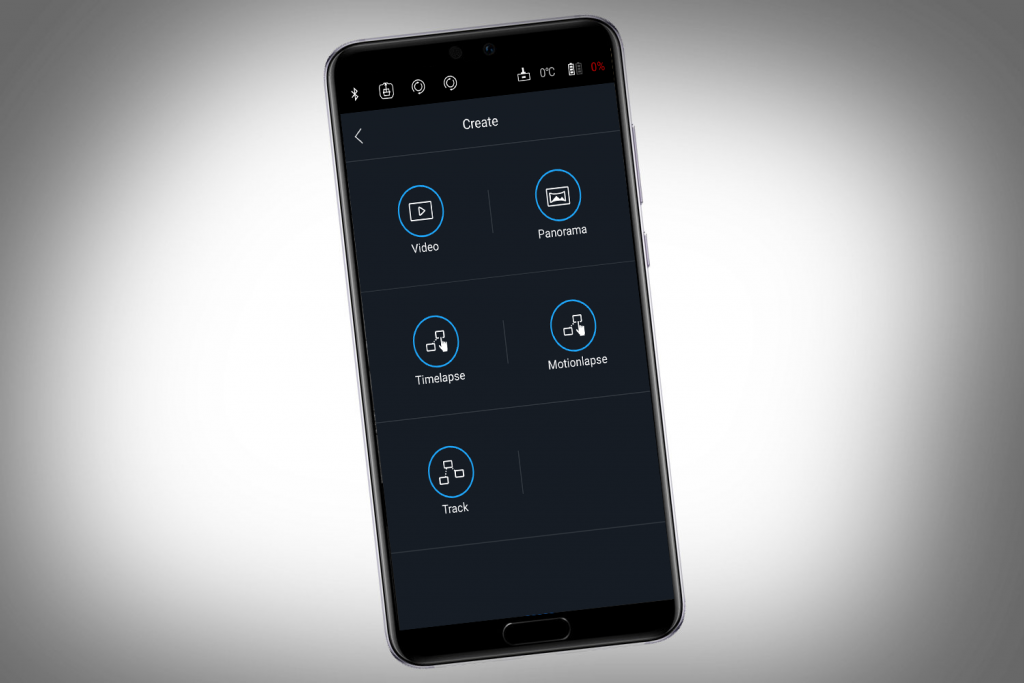 If you want to get the best out of the Ronin-S then the app is an essential download. It’s available for devices running Android 4.4 or iOS 9.0 and above (sorry, Windows phone users).

Its main job is to help you ensure the gimbal is properly set up before each use, with the Auto Tune feature handy for checking the balance whenever mounting a new camera or lens.

However, the app also helps you customise the performance of each of the three user preset modes, and opens up a range of creative shooting modes that let you shoot time-lapse, hyper-lapse and motion time-lapse videos, plus panoramic photographs. You can also use it to remotely control the gimbal’s movements, even when someone else is holding the Ronin-S or it’s perched on its tripod.

It’s a fairly straightforward app on the surface, although dipping deeper into the settings reveals a wealth of options for determining the gimbal’s behaviour. Tweak a few settings and you can even make the gimbal endlessly roll as you move forward. Take a look at our sample video to see that in action.

Why buy the DJI Ronin-S? 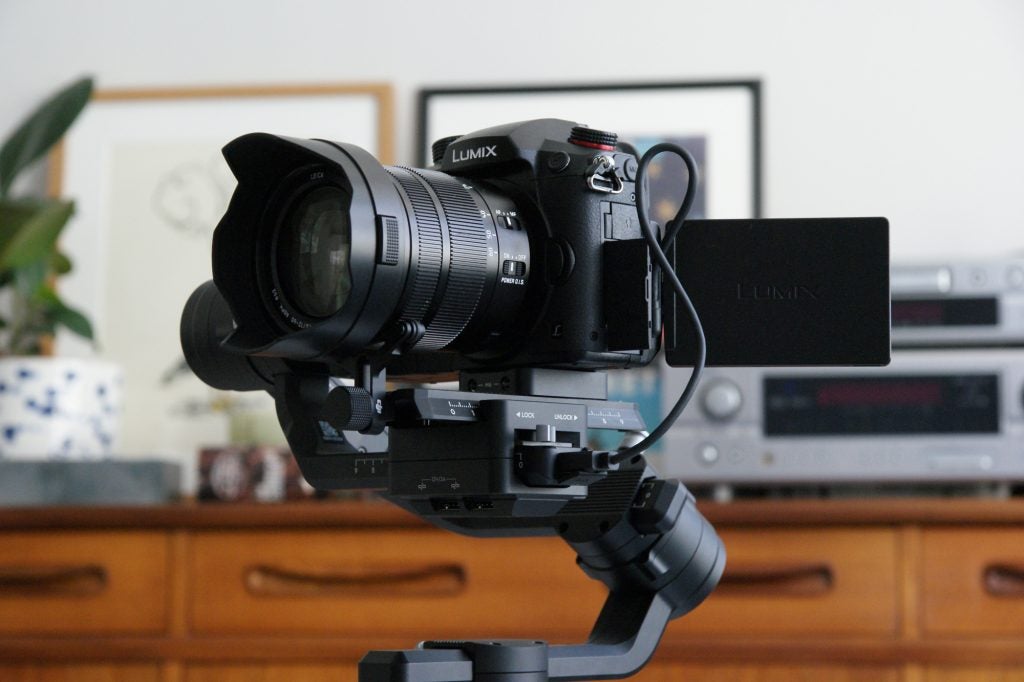 Considering its build quality, performance and features, the Ronin-S is the best ‘affordable’ 3-axis gimbal we’ve tried for cameras of this size.

While £669 isn’t what most would consider cheap, it performs like a professional quality product and is packed with thoughtful design touches and flexibility. It’s a one-stop shop for on-foot filmmaking, basically, even if it isn’t without some small issues.

It’s a little on the heavy side and isn’t (yet) fully compatible with enough cameras, which does make it something of a niche buy. It certainly isn’t a product that will hugely benefit everyone who occasionally uses their system camera for video, but enthusiasts will adore it – and rightly so.