I’m in flames. Again. This is going to be a very familiar situation over the course of my time with Divinity 2: Original Sin.

Almost a year after its retail release on PC, the sequel to Divinity: Original Sin, hailed as one of the 2017’s best RPGs, has come to consoles. It’s entering a small market. Traditionally, CRPGs with their top-down view and complex management systems have been PC games, as the C for “Computer” in the acronym implies. Much like many strategy titles, they are now carving out a console audience for themselves.

Even with games like Pillars of Eternity and Diablo 3 available on consoles, Divinity: Original Sin 2 adds an important game to a small selection of others just like it.

Set several thousand years after the first Divinity, the sequel throws you right into the action. Your character has been taken captive because they’re a versed wielder of the Source. The word used in the world of Rivellon for such people is “Sourcerer”, which should tell you what type of energy the Source is. (Anyone else notice a missed opportunity for a cooler name for people who use the Star Wars’ Force here?)

Using the Source apparently creates rifts in the Void, which separates the world of demons from Rivellon, letting demons called the Voidwoken run wild, and so all Sourcerers are outfitted with magic-suppressing collars and shipped off to Fort Joy, a prison colony. 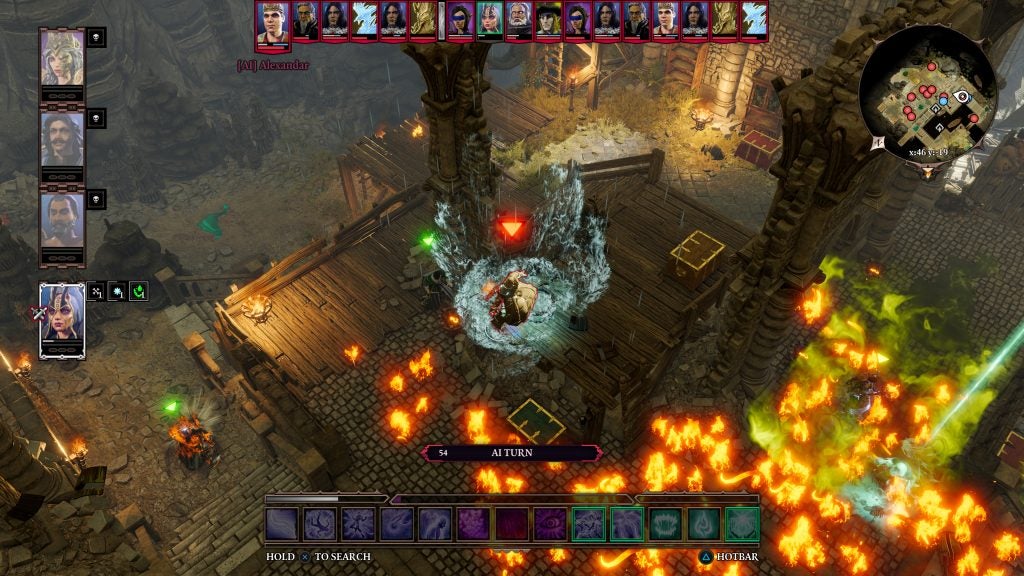 Once escaped, the real story has only just begun, as your character has a vital role to play in restoring the barrier between worlds. D:OS 2 is essentially another take on the story of the Chosen One, and while confidently told, nothing revolutionary. It sometimes comes close to the world-building in Dragon Age but takes its plot down far more sprawling and complex paths.

Sprawling and complex are incidentally the two words that describe D:OS 2 best. This is mostly due to how closely the game plays by the rulebook of pen and paper role-playing games. If you’ve ever played Dungeons and Dragons or Pathfinder, you should feel at home with how your character’s attributes influence your progress and how battles are conducted.

You can either construct your character from scratch or use an origin hero. Origin characters represent each of the different races and classes of Rivellon and have their own backstory you can follow through several additional quests. The origin characters you don’t pick appear as possible party members, although you can’t invite everyone into your group – up to three of them can assist you in your adventure. If you like, you can play with up to three friends in online multiplayer, too, even though you’ll perhaps want to follow the old RPG rule to never split the party unless absolutely necessary.

Divinity: Original Sin 2 doesn’t feel like much of an adventure at first, mired on an island with nowhere to go. What Divinity 2 does, however, is to show how each goal can be broken down into a myriad of small tasks, and how many different ways there are to accomplish them. Investing your time is very rewarding. Every NPC is different, and while some quests are RPG classics, the strength of the presentation alone hooked me to the point I wanted to explore every nook and cranny. There is so much of Rivellon to see, but you can also miss a lot unless you’re willing to backtrack and take a closer look. 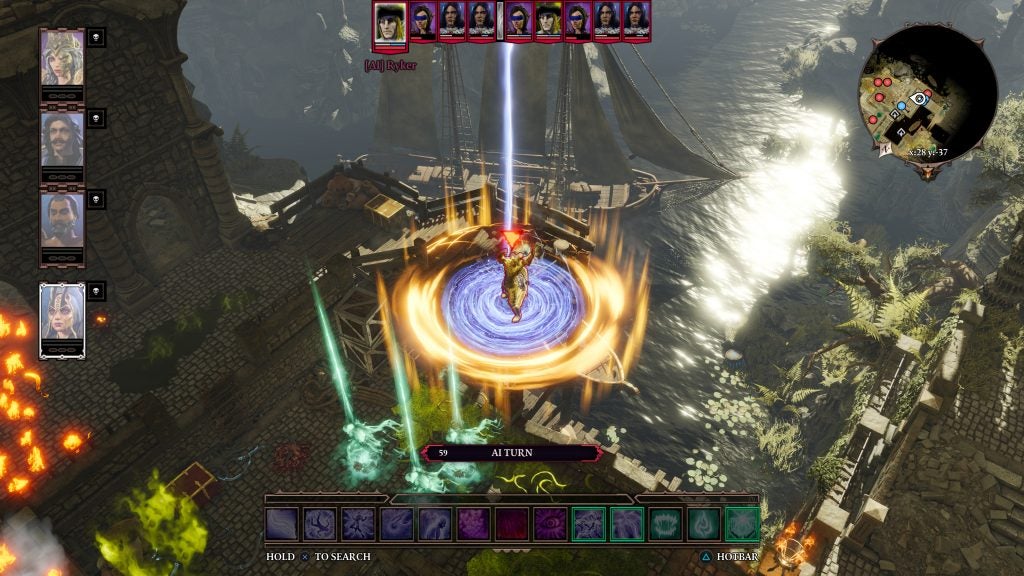 Something as straight-forward as getting to know the population of Fort Joy and finding a way out can thus take up to 20 hours alone. Some of the quests you solve here will have consequences hours later in the game, which keeps it constantly fresh and surprising. The trade-off for such surprises is Divinity 2’s frustrating refusal to tell you much of anything.

Every quest in painted in very broad strokes – it’s how you stumble around looking for the right person to talk to or the right way to go that you end up with a lot of sidequests, which will all equally pull you in because they’re interestingly written and worth following up on to the point where you resurface after several hours, only to remember you’ve done nothing to further the main quest and are still not sure how.

Especially in the beginning, such freedom can seem overwhelming. Should I feed my elven companion a limb to unlock a dead person’s memories? Should I take a witness statement from a farm animal? Bribe someone into giving me information? Beg, borrow and steal? All options are valid, not all of them are right, and so getting used to many possibilities also means accepting failure.

Of course, you can also load a save and try again, but unless you want to do that many times, you should accept that Divinity: OS2 was not designed to let you win, but to force you to make decisions. 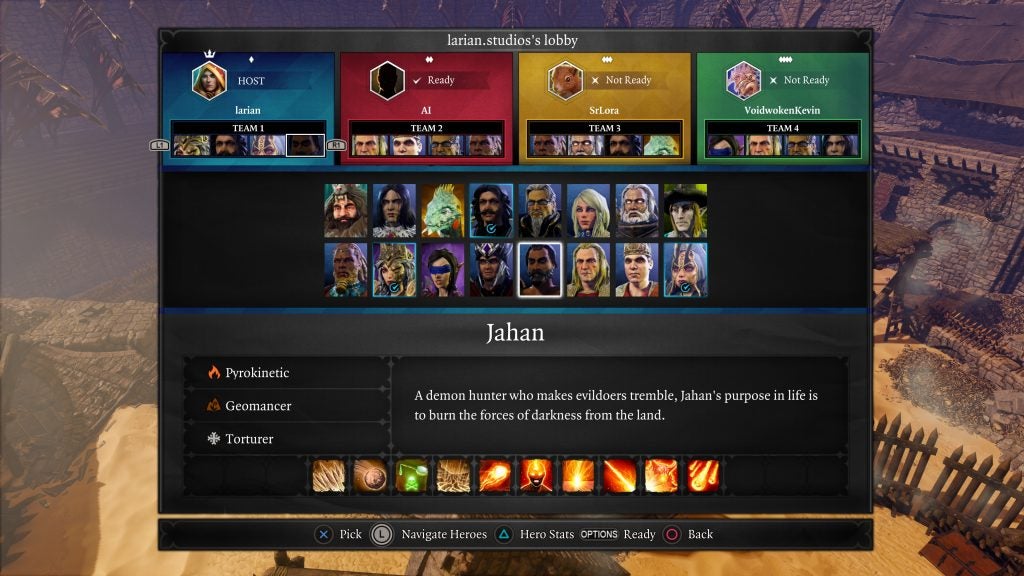 This is true for the round-based combat, as well. Even at the easiest difficulty setting, encounters can be challenging, especially if your party is in a state where avoiding it altogether would’ve been the healthier option. Once in battle, every move costs AP, which need to be managed smartly. If you end your turn early, AP can transfer to the next round, but you will need all of them often between moving into the range of an enemy and then actually attacking.

Here the flames mentioned earlier come in. And the acid. And the electricity. This game makes fantastic use of the elements in a way that your typical RPG’s elemental magic never does since a lot of damage is done from afar. Dousing a group of adversaries in oil and setting them on fire is a viable strategy to victory for both sides, and so is putting out fires using the rain, electrifying puddles and so on.

The enemy AI is smart and often reacts by mirroring your actions so that winning often comes down to simply being faster. While being stronger is important, especially since an enemy just one or two levels above you can easily crush you,  the influence of magical and physical amour is also not to be underestimated. Removing the armour and upholding your own adds another layer to battles. It’s another aspect in which Divinity: OS 2 feels difficult to grasp at first, even though battles actually never take all that long.

It’s a game you have to put a bit of time into to truly learn. Unfortunately, it’s the console UI that often hampers this. In the PC version, descriptive text (of which you’re going to read a lot) appears on hover, the hot bar is a long stretch across your screen. In the console version, every description only appears at a button press and takes up a lot of the screen. You have to switch characters often, but during quests as well as for inventory management, and on consoles this requires going into at least two different menus, if not more. 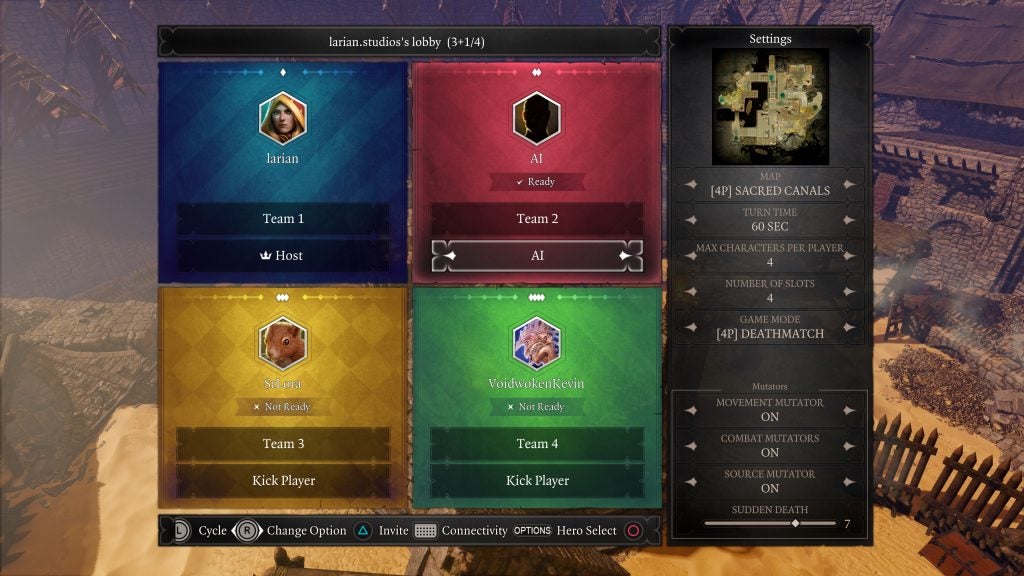 The hotbar is split into three parts, which you have to navigate with your shoulder buttons. Add to that the old problem of playing a CRPG when you’re 30 feet away from your screen – you can zoom in, but Divinity was not designed to be looked at up close. It also zooms back out at any opportunity.

Overlook these little niggles and Divinity: Original Sin 2 is the best RPG to make it to consoles since The Witcher 3. It’s vast, engaging and surprising. The willingness to accommodate many different types of play may have its drawbacks, but once you’ve understood the systems and given thought to what kind of hero you want to be, you can sink literally hundreds of hours into your life on Rivellon.