Dissidia Final Fantasy NT is shameless fanservice in the best possible way. Bringing together a roster of beloved characters from the series’ greatest games to duke it out in spectacular battles. It’s nonsensical at times, and embraces every second of its own excess with a fast, fluid battle system and almost overwhelming potential of options upon first glance. Watching Cloud and Lightning clash in the skies of Alexandria is initially a blast, but sadly, can’t detract from its more shallow components.

Team Ninja has crafted a 3v3 fighter where quick reactions and mastering the nuances of each hero is key to victory. All 28 brawlers play differently, possessing unique skills and ways of movement that change how you approach each match.

Divided into four classes – Vanguard, Assassin, Marksman and Specialist – Dissidia’s cast encourages experimentation and expects you to learn from experience, instead of relying on a never-ending series of combos in a move list. It’s refreshing, and stands out among its peers as a result. 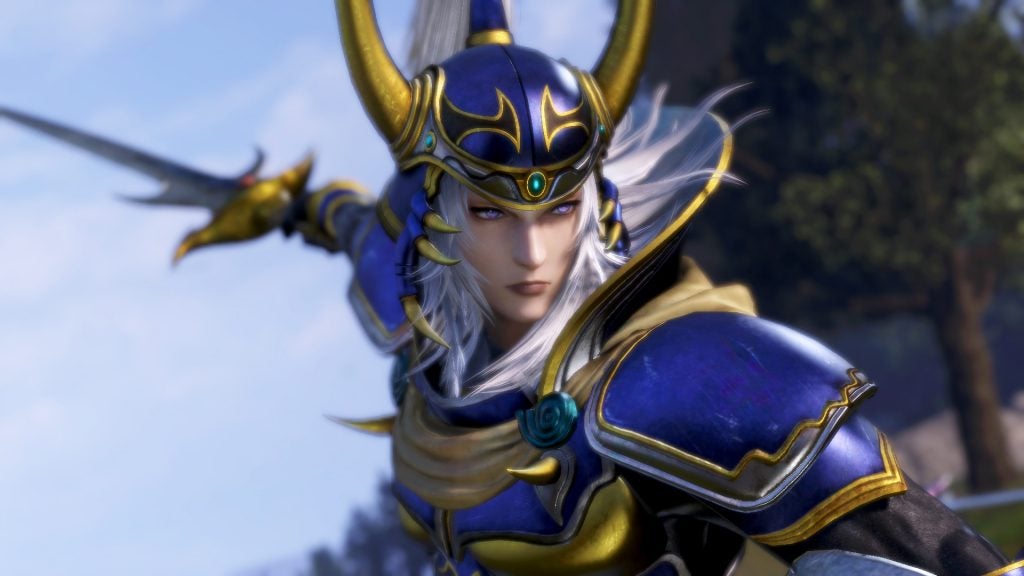 Battles are fought in two different variants that either see players battling foes until all three lives are depleted, or protecting a fluorescent core acting as a base. They each take advantage of Dissidia’s acrobatic combat and manoeuvrability in exciting ways, often requiring precise teamwork to emerge victorious.

It’s unfortunate, then, that beyond the story mode, these are the only game types available at launch. Although they never quite grew stale for me, a greater sense of variety would have been welcome.

Combat is almost rhythmic, too. Attacks come in two forms: Bravery and HP. Once your opponent’s Bravery Gauge is depleted, they’re left vulnerable to a flurry of HP attacks and inevitable incapacitation. This leaves the enemy with one less life while they spend precious seconds reviving.

I found executing a string of combos and watching as my attack sent someone soaring across the stage incredibly satisfying, particularly when a real person was on the receiving end during online play.

Dissidia provides a relatively seamless online experience that’s only hampered by the aforementioned lack of modes. Matchmaking was snappy and I seldom had trouble finding other players with whom to throw down. 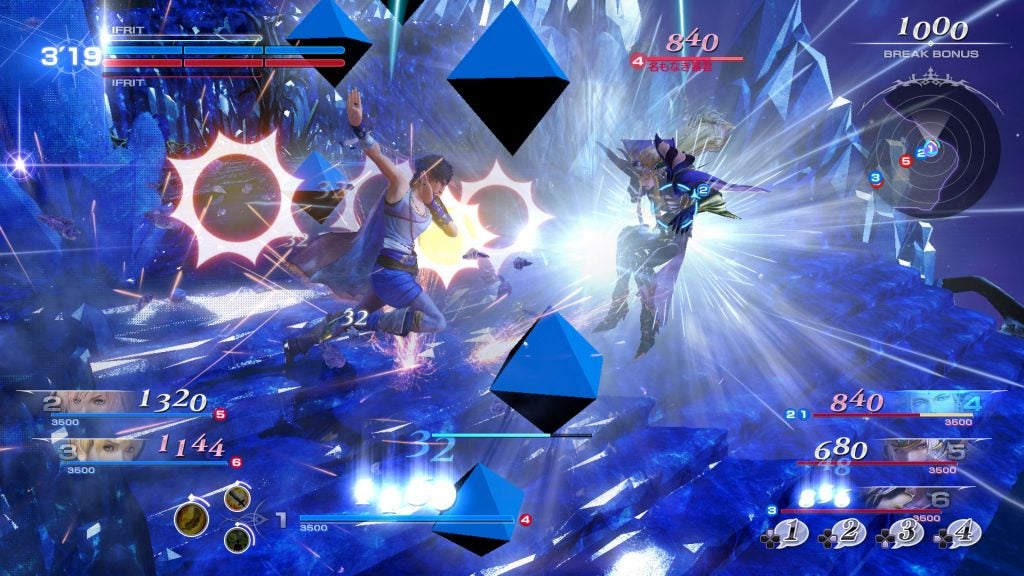 Pedestrian encounters are spiced up further with the addition of EX Skills. These special abilities can damage enemies with nasty status effects; or buff allies with extra damage output, HP Regen or myriad other abilities that are unlocked as you progress. Dissidia ties experience to each character, meaning you’ll need to invest reasonable time to figure out what they’re all truly capable of. This is a double-edged sword: climbing the ranks is rewarding on one hand but an arduous grind on the other.

Of course, it wouldn’t be Final Fantasy without the appearance of summons. Dissidia knows this, and makes the mythical creatures a core component of every fight.

You can choose from a selection of summons prior to each battle, with players left to vote for their favourite online. These include Ifrit, Ramuh, Shiva and the legendary Bahamut. Every summon is introduced with a beautiful animation, before they execute their attack after stomping onto the battlefield in spectacular style.

I was shocked at how influential summons were at turning the tide of battle, battering enemies with unflattering ailments and huge damage. Summons are activated by attacking a core that appears at random on the battlefield, leading each team to scramble towards it in a desperate grasp for power.

The above adds an extra dynamic to each battle, forcing me to adjust my strategy on the fly – even it means leaving myself vulnerable.

Alongside new skills, Dissidia places a significant focus on cosmetic unlocks as a core pillar of progression. Nearly every successful battle will leave you with handfuls of gil to spend, or lootbox-esque treasures to open containing nothing but optional cosmetics and the occasional music track.

The dedication to Final Fantasy’s prestigious history is admirable, with a flurry of icons, skins and voicelines for each hero almost reaching the point of absurdity. However, it’s also superficial and adds little to the overall experience. I’d prefer the RPG elements from previous Dissidia titles made a return, since this could certainly add a bit more longevity. 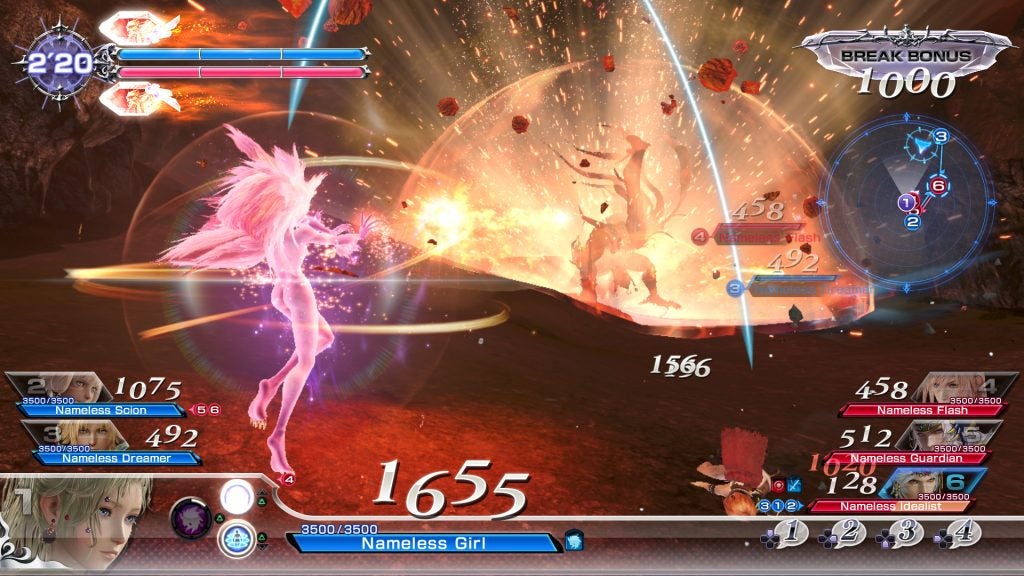 The Story mode is a brief yet enjoyable affair, with an obvious focus on fanservice over narrative coherence.

Taking place after the events of past Dissidia games, the many faces of Final Fantasy act as warriors to the goddess known as Materia. You work together to conquer an evil force that’s threatening to engulf the world as we know it.

It’s fun, silly and features plenty of cutscenes with personalities I had never expected to see clash in utterly ridiculous situations. I must admit, lending voices to those who have been silent in my head for decades proved jarring at first.

One interesting aspect of Dissidia’s solo campaign is how new scenes and fights are unlocked.

Items known as Memoria are required, which can only be earned by playing either online or through Gauntlet – Dissidia’s equivalent of arcade mode. Your only method of chipping away at Dissidia’s narrative is by honing your skills through other means.

Personally, I found this to be a neat idea, making each major story encounter a welcome challenge in testing how far I’d come.

It’s a shame the yarn unfolds far quicker than I’d have liked, coming to a conclusion after only a few hours of play. It’s an expected length for most fighters, but Dissidia’s noticeable lack of modes makes it a far harder pill to swallow.

Extra scenarios are unlocked in Gauntlet mode while progressing through the story, forcing you to play as a specific trio of characters. This restriction puts a creative spin on the usual battles, as you discover how an unexpected team compliment each other in exciting ways. 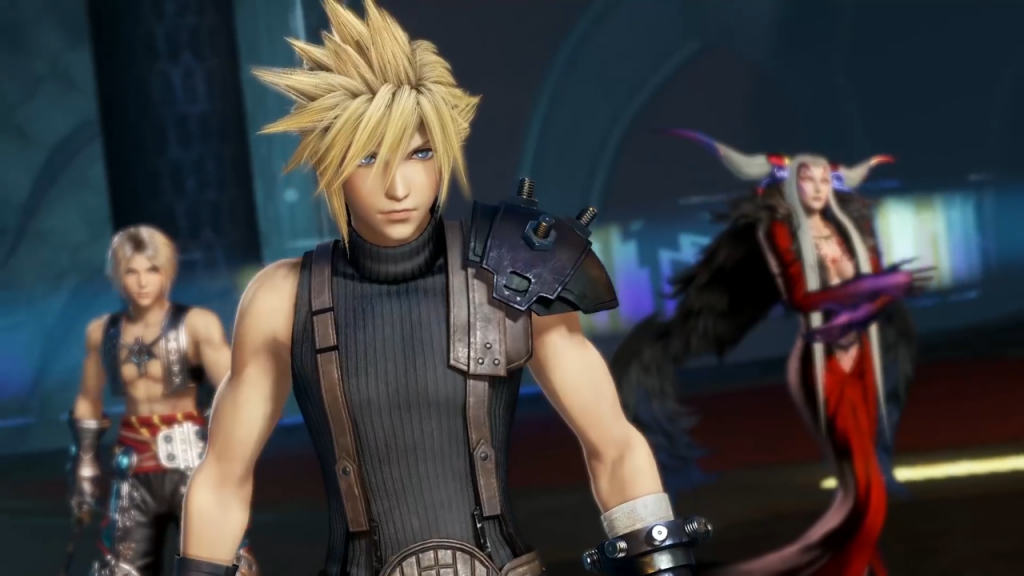 Its fast, frantic battle system makes it easy to pick up and play, but also difficult to master once you delve into the inner workings of each hero.

Unfortunately, it’s held back by a distinct lack of modes and progression options beyond a ludicrous number of cosmetic goodies.