On all sorts of levels, Disneyland Adventures is a pretty impressive achievement. Frontier Developments – the studio behind the excellent Kinectimals series – has done a fantastic job of taking the original Disneyland from Anaheim, California and turning it into a virtual theme park on the Xbox 360, complete with all the scenery, landmarks, shops, restaurants and attractions of the real thing.

There are cheerful families and happy children everywhere you look, and it’s all done in a beautiful cartoon style that, in some ways, makes it feel even more Disneyland than Disneyland itself. And – unlike some real-world Disney parks – it’s impossible to go anywhere without seeing a friendly Disney character, just itching to greet, chat to, hug and even dance with the younger gamers the title is clearly aiming for. There’s no sixty minute wait to meet a princess here; Cinderella and Sleeping Beauty are out and about in Fantasyland, just hanging. 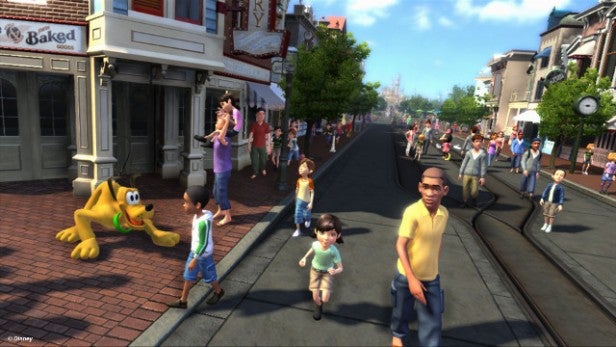 In short, Disneyland Adventures has Disneyland down, but what about the Adventures? Well, these come in two forms. Firstly, many of the characters you interact with have quests for you, which generally involve collecting a number of items and bringing them back, or going to find another character on their behalf.

Some even have a gift for you to use, like a camera you can use to take snapshots of your Disney favourites, or a magic wand you can wave to bring the scenery to life. Cleverly, the game finds ways to use these tools in ongoing missions and individual quests.

Secondly, a good number of Disneyland’s rides (and we’re sure we haven’t discovered them all) have been turned into multi-stage mini-games. Big Thunder Mountain, for example, becomes a chase after, and then over, a runaway ghost train. While Pirates of the Caribbean is a lavish, four-stage affair featuring a boat ride through the bayou, a barrel-dodging rapids-race through a skeleton-haunted cove, swordfights on a pirate ship’s deck and – finally and rather breathlessly – a sneaking mission through a pirate’s port complete with fruit-throwing, pose-copying and bomb-deflecting escapades. 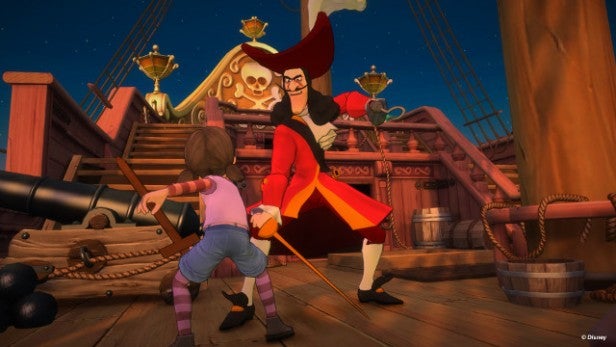 Not all the mini-games are equally successful, and some overstay their welcome, but the best are crammed with ideas, enjoyably varied and packed with collectables and alternate paths to encourage replay. You can’t fail any of them, but there’s always room to get a higher score and a nice bonus badge to prove you’ve got it. They can also be enjoyed by two-players at once, with the game handling drop-in, drop-out cooperative play.

The Kinect controls work well. In the park you simply wave your hand left and right to rotate your avatar and your view, and then point forwards to start walking. A simple set of gestures controls your interactions with characters and the tools at your disposal. In the ride mini-games you’ll have to compensate for a little lag, but most of the games use a simple set of leaning, jumping and ducking movements, with the occasional point to fire a blaster or hitting motion to wield a cutlass, and it’s all quite intuitive stuff. 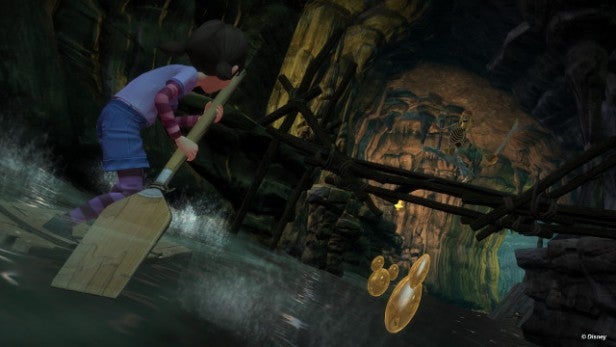 Looked at in the cold light of day, it’s easy to pick faults with Disneyland Adventures. It is repetitive, the tasks can get samey and it’s not the most sophisticated adventure. Yet, at the same time the urge to finish quests, buy new clothes and accessories and find new areas and attractions is pretty compulsive, and the game has a nice light RPG feel that keeps you hooked. Most importantly, it gives younger members a family a chance to interact with digital versions of characters they know and love, and explore a place that many will have dreamt of going to. If you have or are getting Kinect, there isn’t a better Christmas present you can give them than that.

Verdict
Disneyland Adventures lives up to its title, giving you a beautifully detailed recreation of the park and a range of enjoyable adventures inside it. As a grown-up you might grouse about the repetitive gameplay or the shortcomings of the controls, but the kids will be too busy high-fiving Goofy, taking snaps and pushing for a better rating on Space Mountain to listen. One of the finest family games to hit Kinect.