Finished Toy Box levels can be uploaded to Disney’s servers for sharing with the wider community, though Disney is taking the sensible precaution of approving new levels first, presumably to make sure they’re age-appropriate and copyright-safe.

In a way, though, the real joy of the Toy Box is in using it exactly like a toy box, combining characters and objects from all kinds of Disney and Pixar films, so that Sulley can race Jack Sparrow in Cinderella coaches, or help Mr Incredible mop up palace guards from Aladdin and zombie marauders from Pirates of the Caribbean.

Throw in the amount of stuff to collect and play with and the challenges found within the pre-made levels, and there’s an awful lot of content just here. 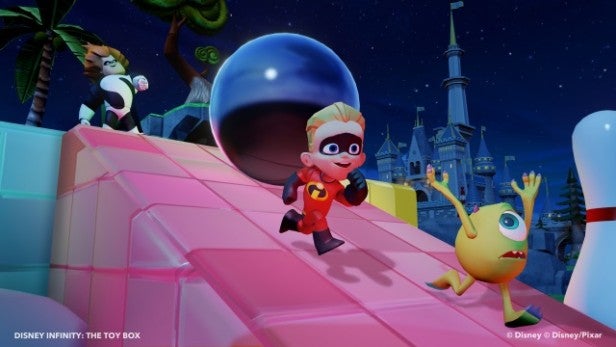 The big strength of Disney Infinity is that you already know the characters and the worlds, and Avalanche has done a great job of simplifying properties as different as Monsters U and Pirates of the Caribbean so that they can all share a single visual style and cartoon look.

Disney Infinity is not the most graphically stunning or technically accomplished game you’ve ever seen, but it’s got atmosphere and pizzazz. Use of material from the original soundtracks also helps, and while it would have been great to have the original cast voices involved, it’s not hard to imagine the costs of getting the likes of John Goodman, Billy Crystal, Johnny Depp and Tom Hanks working on a project of this scale. Their stand-ins do a thoroughly likeable job. 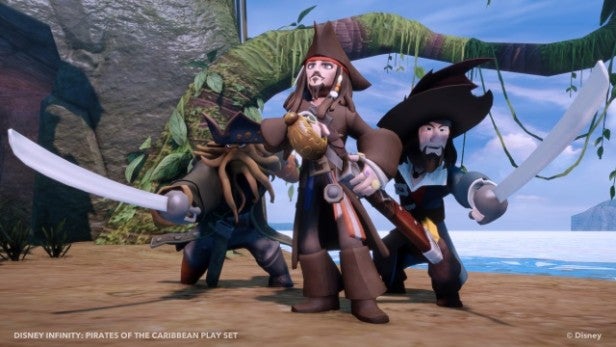 If we have any reservations about Disney Infinity, then these come down to the ongoing costs. The starter pack isn’t exorbitant given what you’re getting, and playsets shouldn’t be too bad given that you get two figures and a whole new adventure. We’re a little dubious about the power disks, but at least they give you an extra at what should be a pocket money price. However, £12 per additional figure is ridiculous and £25 per triple pack is no great improvement.

To be fair, you can get enough gameplay just out of the starter set with no extra outlay, but this means no co-op play in the playsets (only characters originating from that world can take part in a specific playset adventure) and a host of optional objectives and challenge missions you won’t be able to do.

In reality, to get the most out of the starter set you’ll need to pony up an additional £25 for the villains or sidekicks packs. Is that too much? Maybe not, but when you compare it to, say, a Lego game where you get co-op and a vast cast of playable characters bundled in, you have to think twice. Those plastic figures are all very nice, but how much are you prepared to invest? 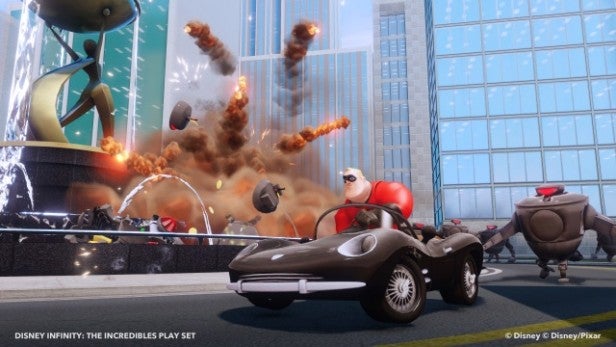 This might be a fault with our PS3 rather than with Disney Infinity, but it certainly caused tears before lunchtime – and not just amongst the younger family members. Secondly, some of the larger environments seem to struggle with co-op split-screen play. One large downloadable Disney level was almost unplayably jerky.

Verdict
It’s easy to write off Infinity as Disney does Skylanders, but with its emphasis on expansion and creativity that doesn’t do it justice. The starter pack is expensive, but with three sizable adventures and an awful lot of stuff to make and do, it’s actually well worth the outlay. The real value of Disney Infinity – and the real cost – will be in what comes next. Those add ons soon mount up and it’s disappointing that you need to splash out more just for co-op play. Will new playsets improve on what we’ve seen already, and will the community create stuff to match what Disney has done so far? Who knows, but there’s plenty of potential, and Disney Infinity is off to a promising start.

Previous
Disney Infinity: Out of the Toy Box Review