Available on Xbox One, PS4, Xbox 360, PS3, Wii U. Disney Infinity 3.0 required
We’re not usually keen to review toys to life game expansion sets, but Rise against the Empire is an exception. This is the reason many people will either have bought or will buy Disney Infinity 3.0; the pack that brings the characters, worlds and set-pieces of the original Star Wars trilogy to the game.

Cynics might argue that Disney was a little disingenuous about this while promoting Infinity 3.0, featuring Rise against the Empire heavily in the advertising even though the Star Wars starter pack featured Clone Wars material. Still, we’ll let that slide. If you want to share the Star Wars Episode IV to VI experience with the kids in toys to life form, Rise against the Empire is a playset worth paying out for.

Roughly £26 nets you figures of Luke and Leia in Episode IV garb plus a transparent Death Star, unlocking the Rise against the Empire campaign. Darth Vader, Han Solo and Chewbacca are also available, at roughly £12 to £13 a pop, while other Infinity 3.0 Star Wars characters are also playable once you’ve found their token in the game.

All the figures are beautifully designed in the usual Infinity way, heavily stylised and not always a close likeness for the original actors, but distinctive enough to be recognisable at a glance. And while purists might scoff at the idea of Ahsoka Tano or Kanun Jarrus turning up in the original trilogy timeline, kids who’ve collected the figures and spent time upgrading the characters will probably think differently. 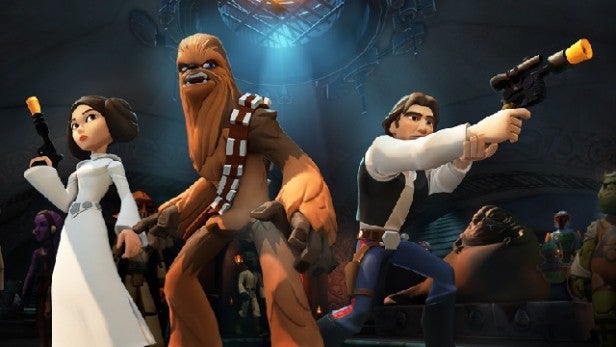 What’s more, Star Wars purists face a lot worse than that from Rise against the Empire. You might say that the campaign is loosely based on the first three Star Wars films, presenting a bizarre, alternative and heavily abridged version. Here Han, Luke, Leia and the droids are together from the opening crawl, the entire second half of The Empire Strikes Back is dispensed with in one cut-scene, Han is never frozen or rescued while Return of the Jedi has just one location: Endor. If you thought Lego Star Wars played fast and loose with the Star Wars storyline, you ain’t seen nothing yet.

What’s left is three large hub areas full of missions, linked and concluded by a series of set-pieces covering the bits you really want to see in any Star Wars games. You’ll spend some of your time ridding a Jawa tribe’s sandcrawler of rampaging Tusken Raiders, rounding up young Tauntauns or dressing keen Ewok agents as stormtroopers for surveillance work, but you just know you’ve got the trench run and the battle of Hoth waiting for you down the line.

Missions focus heavily on combat, platforming and collecting, with time trials and races plus air and space combat to mix things up. You’ll get hands-on with many of your favourite Star Wars vehicles and get to ride around on Banthas and Tauntauns. If you’re a long-term Star Wars fan, Rise of the Empire bends over backwards to make some of your dreams come true. 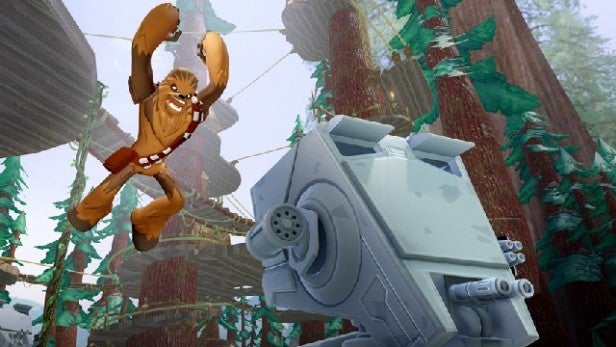 Some of this stuff is brilliant. The Death Star trench run and the escape through the asteroid field are played on-rails in the style of the ancient Star Wars arcade games, but with a more complex set of Starfox-esque manoeuvres and sections that expect you to focus on dodging obstacles or evading incoming fire.

The hand-to-hand combat isn’t as sophisticated as it was in the starter pack’s Twilight of the Republic campaign, with less varied enemies and fewer combos, but there’s recompense in more responsive blasting, turning some scenes into mini third-person shooters. Space combat is basic by Rogue Squadron or X-Wing standards, but it’s fast-paced, entertaining and often spectacular. The racing and time trial sections are consistently good fun, too.

Some sequences or missions are less satisfying. There are a lot of lazy ‘track down five critters and bring them here’ objectives, while driving around Hoth as a glorified taxi driver isn’t much fun – unless, like us, you do it as Darth Vader and run over passing rebel scum while driving across base.

The battle against the AT-ATs on Hoth – part boss fight, part standard wrap the rope around their legs trick – is laboured, with a nasty time limit and no midway save. Failing the mission means having to drive halfway across the Hoth map to find the mission-giver and restart it. That’s a recurring source of annoyance with those rare missions that you don’t polish off on your first or second try. 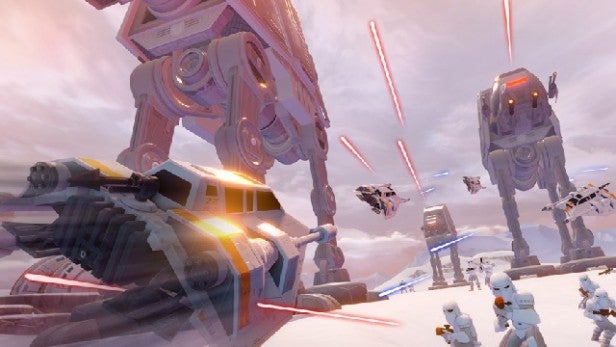 Overall, there’s a slight lack of imagination in the mission design – a problem we’ve found time and time again with Infinity’s campaigns. When the missions are good, they’re very good, and some of the best stuff happens when the developers take Star Wars tongue-in-cheek, Lego Star Wars-style. Yet there’s a little too much bland, forgettable busywork here. Younger gamers might not mind, but their Star Wars-loving parents will.

What constantly brings Rise against the Empire up from mediocrity, however, is the sheer Star Wars-ishness of the whole thing. True, we don’t get the original actors or even the original story, but watching cartoon Snowspeeders race across the icy surface of Hoth while the soundtrack swells in the background earns the game a lot of goodwill.

Ditto for charging Banthas through squadrons of stormtroopers, ducking and diving through the trees on a speeder-bike on Endor, shooting wamp-rats from your T-16 or firing that final, decisive proton torpedo down the Death Star’s exhaust port. Fans can also enjoy some fantastic in-jokes, ranging from wry lines of dialogue to some deeply lovable bits of interior design. 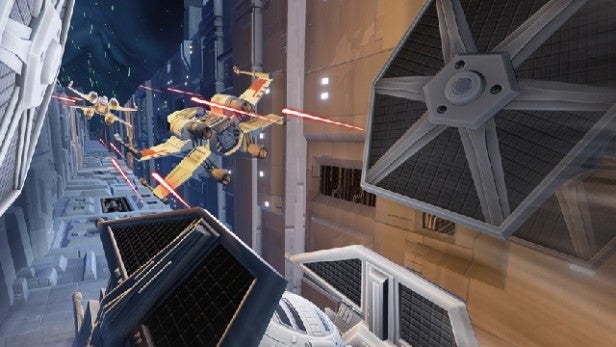 And when the whole thing’s over, after roughly six to eight hours of play? Well, a lot of it has decent high-score chasing replay value, while you’ll still have a whole new load of Star Wars characters and stuff to play with inside Infinity 3.0’s more creative modes. As always, part of the point is collecting the materials you can use later to make your own Star Wars worlds, then share them online.

Let’s face it. If you didn’t find the hairs rising on the back of your neck when you saw the Episode VII trailer, or you never catch yourself humming the Imperial march, then Rise Against the Empire isn’t for you.

If you did and you do, however, you’ll happily turn a blind eye to what’s rubbish, pony up for all the figures, then pretend that you were doing so ‘for the kids.’ Isn’t that really what Disney Infinity is all about? Needless to say, it’s an expensive habit, though, so be aware that your wallet will be drained.

Verdict
Love Star Wars? Rise against the Empire is an essential expansion for Disney Infinity 3.0. In fact, it’s all the justification you need to pony up for the Star Wars starter pack. Only like Star Wars? It’s a tougher sell.

The gameplay is occasionally brilliant but often closer to average, and the amount you’ll spend on starter pack, playset and additional figures builds up pretty fast. It’s worth buying for the Star Wars goodness, but the gameplay isn’t always so inspired.