Available on Xbox One (reviewed), Xbox 360
No developer has fused music and gaming with such consistent brilliance as Harmonix. After Frequency and Amplitude we had Guitar Hero, and the rest is history. Guitar Hero begat Rock Band, then two sequels and several spin-offs, one of which – The Beatles: Rock Band – is one of the best efforts to mix gaming and mainstream culture ever made. Then, with Dance Central and its sequel, Harmonix made arguably the best reasons to have Kinect – though the competition wasn’t exactly what you might call tough. Harmonix knows and loves gaming inside out, and the same applies to music. What, then, might you ask, is it doing with this?

Disney Fantasia: Music Evolved is an oddity. It’s a Kinect powered rhythm action game tied into Disney’s 1940 animated classic, featuring a mix of classical pieces – some familiar from the movie – and modern rock, pop and R&B. The actual gameplay is somewhere between conducting and playing an electronic drumkit through a weird Minority Report-style gesture interface, As sparks fly towards floating icons on the screen you make sweeping or punching gestures with your hands, flailing in different directions to match the beats, or sweeping them upward, downwards, left or right then holding, keeping the phrase going while your other arm sweeps and punches out another. 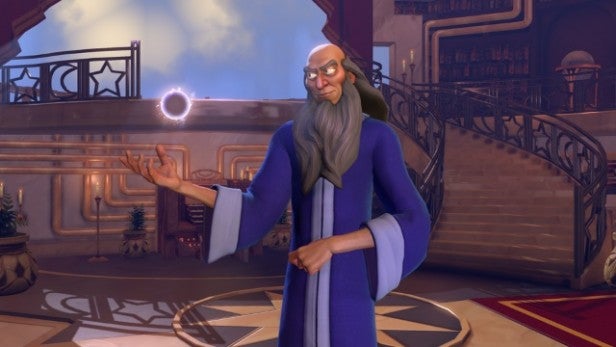 There’s no getting around it: like most Kinect games, Fantasia will make you look like a plonker. You’ll look less like Herbert Von Karajan conducting the Berlin Philharmonic, and more like someone crazy trying to ward off a swarm of angry wasps. At first you might find it difficult. You’ll miss beats. The instruments will fade in volume. The realms in the background will dissolve out of view. Soon enough, however, you should crack it, and there’s something genuinely magical about sweeping crescendos out of the air with a dramatic upwards gesture, or holding a note with one hand while swiping phrases into being with another. Once it gets going, Disney Fantasia is Harmonix on top form.

The single-player campaign introduces you gently to the game’s repertoire of actions, putting you in the shoes of the Fantasia sorcerer’s new apprentice, before introducing your quest: to rid the land of Fantasia of a hideous polluting noise. The land is split into five themed realms, and in each you’ll find two songs, some side-activities and a musical spell. Complete your goals in the two songs, polish off a couple of the side activities and you’ll activate the spell, driving the noise out of that realm forever. 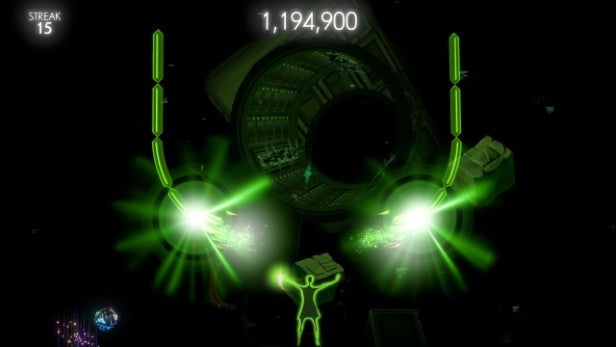 And it’s here that Fantasia plays its trump card: the remix. At key points in each song you get a chance to pull off a punch and flick gesture that racks up a bonus multiplier, helping boost your growing score. Reach a score target, and you get the chance to flick in more than one direction, and this is where things get interesting. Flick one way and the song keeps playing in its standard, familiar form, but flick another and you call in a remix, switching instruments, rhythms, effects and even genres. From there on in you can call in elements from both mixes, transforming, say, Lorde’s Royals into a stunning piece of chamber orchestra-backed pop, then bringing back the heavy beats into the mix.

You see, Disney Fantasia isn’t just about blindly following the beats, but about interacting with – even getting creative with – the music. Open up the alternative mixes and you can cast compositional spells, which are basically simple but intuitive toys to play with the samples in the mix. One lets you pull a rhythm apart into pieces, then stitch them back together in a loop. Others let you play with the pitch of a melodic phrase, or add effects by moving your hands. Another still has you shifting both the melody and the rhythm by tilting and moving your hands as if you were playing some strange virtual accordion. 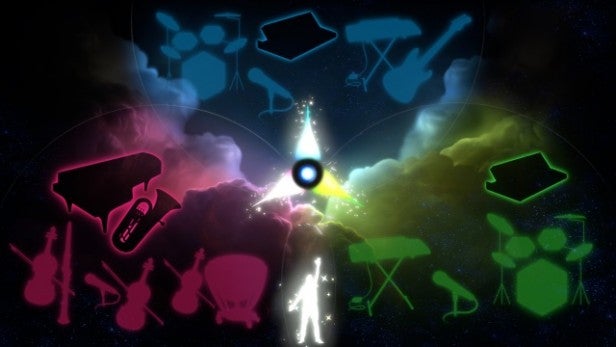 When you’re happy, you drop your hands to the side, then bring them together in a clap. Hey presto! Disney Fantasia goes away and adds your contribution to the mix. All in all, your performance of a song won’t be the same as anyone else’s. You can even record and store one version of each track, preserving your efforts for posterity. Sure, there’s not always that much room to maneuver when you reconstruct your sample, but – like all of Harmonix’s best work – it makes you feel like a participant in the music, not just a passive listener.

And while this is going on, you’ll find plenty else in the realms to keep you busy. Each is yours to explore using simple gesture commands and your Kinect-controlled probe, the muse. There are hidden hotspots, where you’ll be pulled in to perform some other magical, musical task, plucking notes from clams or mushrooms, or pulling samples together to give a defunct machine its voice. Completing these tasks might unlock another part of the spell, or potentially add a new hotspot to the realm. You’ll also find parts of the scenery that respond to the muse’s touch, or to a shaking gesture. Some transform the realm before your eyes, others simply do something fun. If you have kids, they’ll love this stuff. If you’re not too old and grumpy, you might do too. 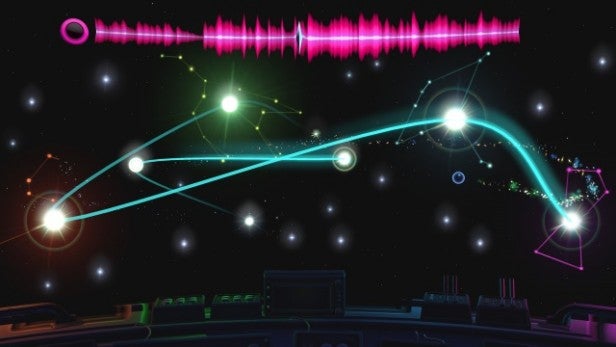 Rid a realm of noise and you unlock a new realm, giving you a total of ten in total, each with two or three songs, plus more hotspots, secrets to discover and mixes to unlock. And each is beautifully presented. Whether it’s wintry landscapes, undersea reefs, fantasy kingdoms or capsules floating in space, you’ll find little touches that might startle, surprise or make you laugh.

It all works so well, of course, because Harmonix knows and cares so much about music. Some of the tracks – Queen’s Bohemian Rhapsody, Mussorgsky’s Night on Bald Mountain – lend themselves perfectly to melodramatic Maestro turns, but you’ll be surprised at how well Elton John’s Rocket Man, Cee Lo Green’s Forget You, Depeche Mode’s Enjoy the Silence or Kimbra’s Settle Down work in the game. And while some of the remixes are just too weird or quirky to really work, there’s always something fascinating in exploring them, pulling different instruments in and out. Eight-bit arcade versions of symphonic classics? Electronica pop hits? Rock favourites rearranged for a brass ensemble? Forget You remixed as an eighties movie theme? You’ve just got to try it. 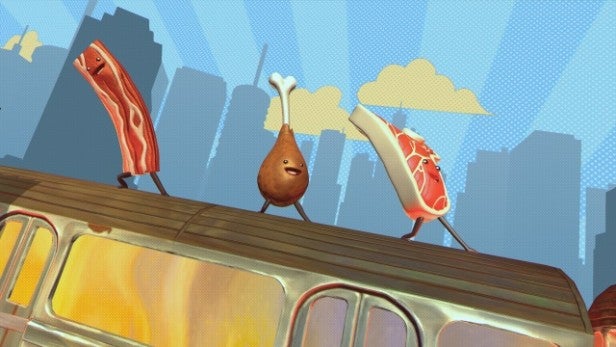 Length will be an issue for some people. We cracked the campaign within around four hours, though without unlocking every spell fragment or doing more than a handful of songs in the additional five realms. Completing the game, discovering all 33 songs and unlocking every mix is going to take you a lot longer, and when you do so, you’ll find each song and mix has been added to the song library, meaning you can tackle them at any time, and even play in a shuffle mode, switching from one track to the next without needing to flick between realms.

Throw in fun two-player multiplayer – cleverly activated with a handshake gesture – and Fantasia isn’t as short as first appears. What’s more, the game launches with genre-specific remix packs and additional DLC tracks, so if you like the game you can easily bulk it out. Did we mention it had Let it Go from Frozen? When your kids find out, they will. 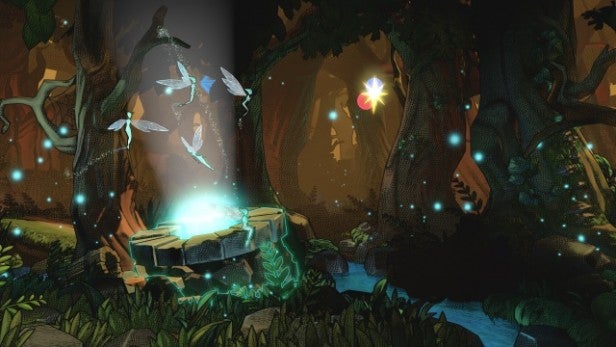 As with all Kinect games, the motion controls bring occasional moments of frustration. Harmonix has been fairly generous, and even younger players will push through a challenge in a handful of goes (more experienced players will take them on the first try). Getting songs perfect and achieving really high scores, however, can mean mastering sequences of gestures of bewildering subtlety and speed, and it’s hard to tell whether it’s you or Kinect that can’t keep up. To be perfectly honest, it’s probably a bit of both. Tapping buttons in rapid succession is easy. Pulling off gestures with precision is not.

We also found it much easier to play standing up than sitting down. While you can play seated, Kinect has a little more trouble tracking your arms – or possibly your more restrained gestures prove more awkward to analyze. To be clear, we’re not talking game-ruining stuff, but it’s worth mentioning. 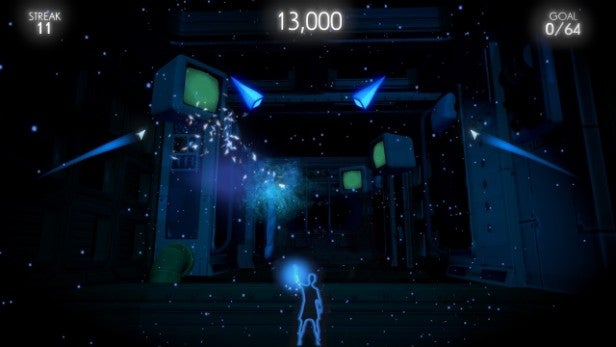 If Disney Fantasia has any failing, it’s that there’s little here for the score attack merchants that obsessed over Guitar Hero for months on end. There are no difficulty levels – though songs and mixes are rated for difficulty – and no online leaderboards that we can see right now. It’s a game you play for the experience, not the challenge, though that won’t stop some pretty feisty in-house competition for the highest score on The Nutcracker Suite or Message in a Bottle.

Verdict
The Guitar Hero score attack crowd might go away disappointed, but this is a genuinely magical musical experience, and one of the best applications of Kinect. Even when you’ve burnt through the short single-player campaign, you’ll keep coming back to explore the realms and try new remixes, conjuring and conducting your way through bizarre collisions of classical works and Carribean rhythms, or chamber music deconstructions of rock and pop hits. It’s a game of exploration, both of the realms and of their music, and brilliant fun for music-loving kids and would-be maestros alike.