Available for PS4 and Xbox One

When it came out in 2012, Dishonored was positively showered with critical acclaim and awards. In a market stifled by long-running franchises, it felt truly fresh and original, combining an arresting, steampunk art-style and general vibe with properly open-ended gameplay that cleverly melded stealth, action and semi-magical abilities. Now that publisher Bethesda Softworks has announced that Dishonored 2 is in the pipeline, this Definitive Version of the original game offers a timely (and keenly priced) means of reacquainting ourselves with the city of Dunwall before its successor arrives. The Definitive Edition has been the beneficiary of a graphical makeover for the Xbox One and PS4, and includes the three slabs of Dishonored DLC that augmented the vanilla game.

If you immersed yourself in Dishonored’s bizarre and beguiling world in 2012, you should probably pause to weigh a few pros and cons before investing in the Definitive Edition. The upscaled version looks good, but not so good that it in any way feels like a different game.

In the Definitive Edition, there’s an extra crispness that’s particularly obvious when you’re confronted by water, but slightly disappointingly, the game runs at 30fps, rather than 60fps, and given its stylised, comic book-influenced art-style, extra realism was never going to be particularly desirable. And one element of the visuals actually jars: upping the resolution of the characters’ faces has somehow made them look slightly leathery and weird. 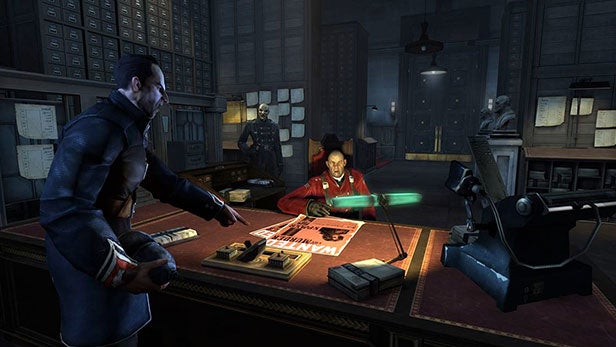 Meanwhile, none of the gameplay has been tampered with in any way whatsoever, which makes sense, since it was and is thoroughly excellent. Few games before or since have offered such a great amount of player-control over how you approach each mission – it is possible to take an all-guns-blazing-and-swords-clashing approach, but the sheer number of enemies makes that hazardous, and that approach alters the world to your disadvantage, bringing extra swarms of hostile rats and plague-infested “Weepers”. Or you can take a completely non-lethal stealth approach. Most of us will pursue a course that lies somewhere in between, but Dishonored has loads of replay value thanks to its very nature.

Because of great systems that let you pick your character’s powers and perks, you can experiment with all manner of play-styles, but the fact remains that in gameplay terms, the Definitive Edition is identical to the original, so if you explored all those avenues first time around, it’s probably not worth splashing the cash once again. However, if you ignored the downloadable content before, then you might well want to buy the Definitive Edition. 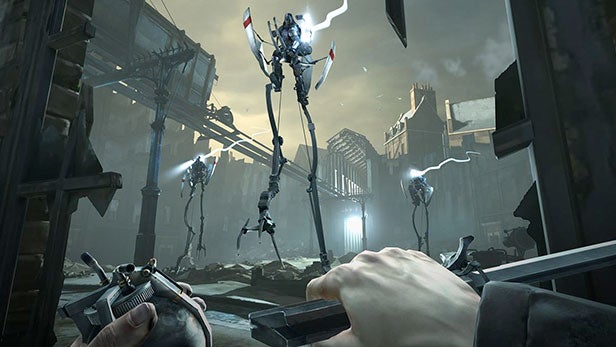 There are three chunks of DLC: Dunwall City Trials, The Brigmore Witches and The Knife of Dunwall. The last two, in particular, are great: they are pretty substantial, take an already superb story in new directions, and add a couple of choice gameplay twists.

In both The Brigmore Witches and The Knife of Dunwall, you play the assassin Daud, who killed the Empress at the start of the original game, leaving the character you play in that – Corvo the bodyguard – to take the blame for her assassination.

Playing as Daud gives a great new perspective on the story, particularly when he begins to question whether he did the right thing. And his skills differ significantly from those of Corvo – he has a great wrist-mounted bow, and the “corrupted bone charms” that give him perks can lead to some very strange attributes indeed.

Dunwall City Trials is fun, too: while it doesn’t provide a fat extra chunk of storyline, it does contain some fiendish, at times puzzle-like, challenges. 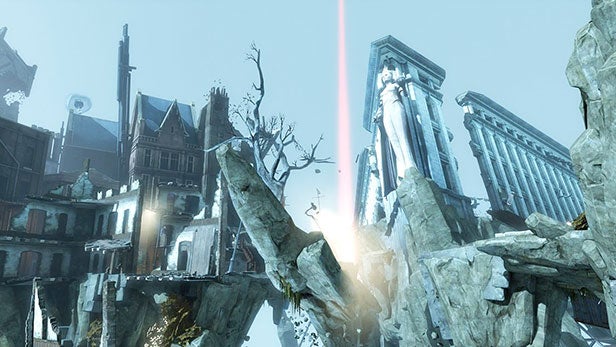 If you bought Dishonored the first time around and subsequently collected the DLC, then you’re bound to be disappointed by the Definitive Edition. Its extra graphical sharpness isn’t sufficiently substantial to leave you feeling that anything new has been brought to the party.

However, if you missed out on the DLC – which is exemplary in both quality and quantity – then it is well worth investing £25 in the Definitive Edition. Dishonored remains a great game, which still manages to feel fresh and original in gameplay terms three years after release. Returning to Dunwall will leave you fully primed for getting hold of Dishonored 2 when it arrives.

Verdict
It’s great to be back in Dunwall – but only if you missed the DLC first time around.