It’s almost impossible to come to Dishonored without huge expectations. It’s a game you can’t disentangle from the history of its makers, or the heritage of the games that inspired it. Its creative team includes alumni from System Shock, Deus Ex, Half-Life 2 and Arx Fatalis.  Its developer Arkane’s last job was providing creative services on BioShock 2, and before that it worked on a cancelled spin-off of the Half-Life series.

All these games, along with Bioshock, Thief and Thief 2, are in Dishonored’s bloodline, and in a way its seen as the next natural heir to the System Shock/Deus Ex/Thief legacy, fitting in with Bioshock and Deus Ex: Human Revolution. In fact, it ticks all the same boxes: freedom of action, open level design, tools you can experiment with, a player-centric approach to gameplay and story. 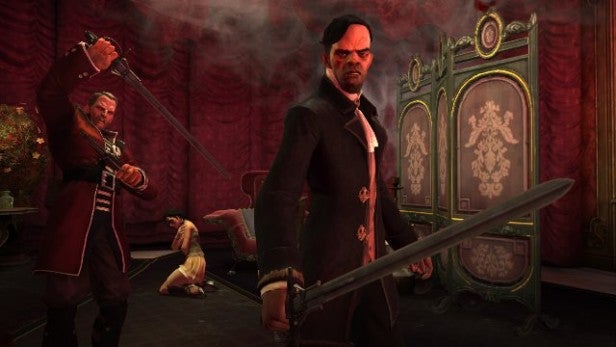 The danger with all these expectations is that they can be a burden. Either you get a game that ends up disappointing, or one that ends up in thrall to its influences, and fails to transcend them. Dishonored doesn’t always escape the latter trap, but it’s more than a sop for Deus Ex/Thief nostalgia. It’s a game that’s not afraid to demand that you think, and one that actually rewards you when you do so.

Vengeance is thine!
The premise is a variation on the classic revenge drama, kicking off with Corvo, bodyguard to the Empress of a steampunk fantasy empire, framed for her murder, imprisoned and sentenced to death. Luckily, Corvo is helped to escape by a rebel faction, so that he can become an assassin, striking out against the targets who made him for a patsy, rescuing the Empress’s daughter and helping put the realm back to rights.

It all takes place in the Imperial capital of Dunwall – an ingenious vision of a fictionalised London, where Victorian ironwork mixes with 18th Century style, and where an explosion of Whale oil based technology has accelerated a social and industrial revolution. To add further spice, Dunwall is in the grip of a mysterious plague, spread by unusually vicious rats and leaving its victims in a zombie-like state. What’s more, there’s further conflict between the establishment and the enigmatic ‘Outsider’ – a being with supernatural abilities who can grant magic powers to his human followers. 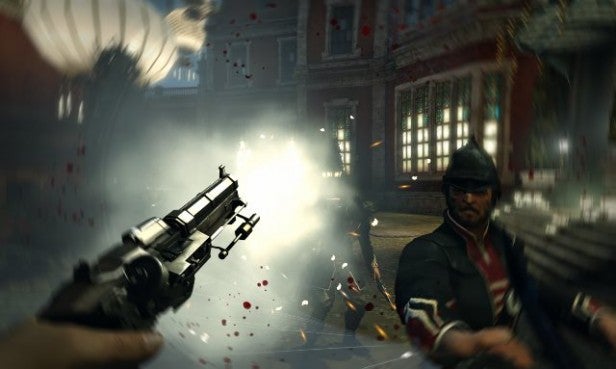 Beyond this, Dishonored is a series of missions, each taking place in an area of Dunwall, and each with a specific objective or target. The clever thing is that how you achieve your goal is pretty much up to you, and that there’s always more to a mission area than the portion where the decisive action must take place.

For instance, to get into a high-class brothel where two dissolute parliamentarians are loitering, you could simply find your own way through, or do a favour for a local gangster and let him open up a route for you. To infiltrate, you could attempt a frontal assault, use stealth to sneak in through a window, or creep in through a vent in the form of a rat. Even assassinations have their own optional methods: a knife to the throat, a crossbow bolt through the temple, or how about a nicely staged accident? The choice is always yours.

Weapons and Powers
Meanwhile, Dishonored takes a leaf from the System Shock and Bioshock rulebook by mixing vaguely recognisable weapons with magical powers. Crossbows, pistols, traps and blades are your mainstays, but Corvo starts off with a nifty short-range teleport power, and before long can earn other arcane talents. Dunwall, it turns out, is full of runes – whalebone objects imbued with magic power – and by collecting and spending these Corvo can unlock new magic powers. Want to slow time? Possess animals? See through walls? Knock over foes with gusts of wind? Get the runes and you can make it happen.

What’s more, all these abilities can be upgraded, allowing you to hop further distances, posess people as well as creatures, and pause time altogether for a moment. Throw in weapon upgrades, sight upgrades and damage upgrades, plus a collection of whalebone charms that deliver bonus offensive and defensive perks, and you can’t really fault Dishonored for a lack of toys. 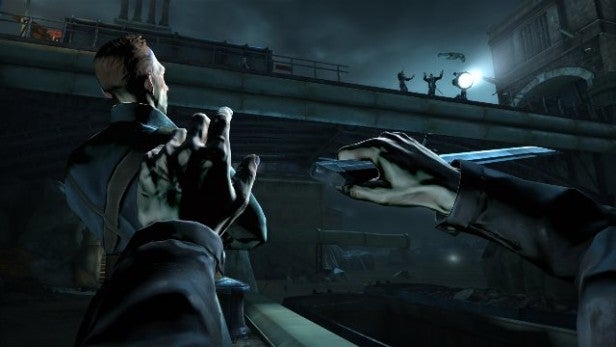 The great thing is how it all comes together. If you want you can try the most direct line, though, you’ll have a shorter and less satisfying game. The real pleasure in Dishonored is exploring each locale, accepting and completing side-missions, tracking down the runes and finding new ways in and out of government buildings and luxurious mansions.

However you play you will die occasionally, but here death doesn’t seem so much like the end as an opportunity to try again with a different, smarter approach. For every situation there seem to be three, four or more solutions, some bloody, some stealthy and some smart. And the more effort and imagination you put in, the more runes and charms you find, the more puzzle pieces you can put together, and the more powerful Corvo becomes.

Style and Atmosphere
The other vital thing is atmosphere. Just like Bioshock, Dishonored creates a distinctive world and peoples it with weird and often grotesque characters. The art style is painterly rather than photorealistic, with deliberately caricatured figures and an expressionistic use of light, texture and colour.

Artistic director Viktor Antonov once used his architectural skills to create the oppressive, soviet style of Half Life 2’s City 17. Here he’s created a city that merges 17th to 19th Century British design with elements of fascist architecture, neo-gothic and art nouveau. The world is packed with journals, letters, books and plays for you to read, not to mention posters and pamphlets. Put all together, it makes Dunwall a convincing and compelling place to visit. 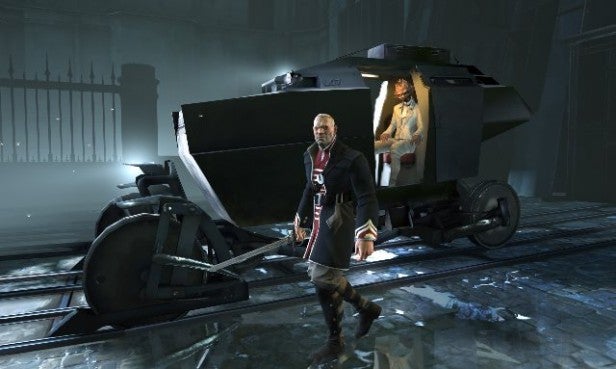 For all these reasons Dishonored is a stunning game. If you want a game that leads you by the nose from encounter to encounter it’s not the one for you – in fact there’s so little shooting that you can’t even call it a first-person shooter. The more you put into it, however, the more immersive it becomes. Like Deus Ex and like Thief – and to a lesser extent Bioshock – it’s a game that says “here’s a world, now get lost in it.”

Breaking the Illusion
Of course, the illusion doesn’t always work. With so much exterior and interior detail Dunwall has had to be carved into chunks, and you’ll see loading screens as you enter certain buildings or move from one area into another. Despite hiring in some big Hollywood names, including Susan Sarandon, Michael Madsen and Carrie Fisher, stilted voicework and animation sometimes fails to bring the tale to life. In terms of visual design it’s Bioshock’s equal – and its superior in terms of gameplay – but it never quite hits the same level of narrative power. 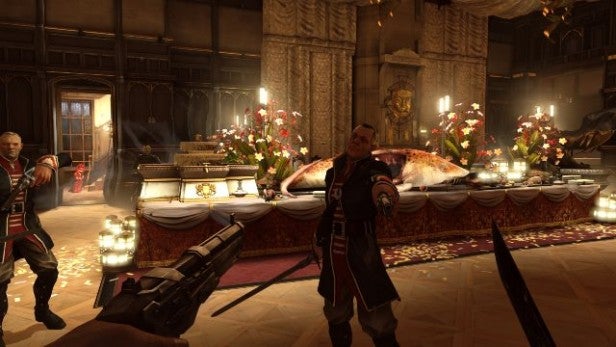 The AI systems have their own odd moments of absurdity, as characters see you from a distance if you’re on the same level, but seem oblivious to your antics if you’re just above their direct line of sight. Meanwhile, objects and characters occasionally get stuck in jerking physics-engine glitches. It’s also odd that, while choices at one point affect opportunities and outcomes later on, a character in one section will welcome you with open arms even though you’ve acted against them in the last mission, leaving witnesses behind.

Length and Value
Finally, we can’t review Dishonored without mentioning the issue of length. There are reports of players cracking the game within five hours, but we really don’t know how they did it. There are nine missions in all, and we’ve spent two to three hours in some of them alone. Throw in the obvious replay value, trying different approaches at harder difficulty levels, and any question of value seems moot. Rush through Dishonored and you won’t make the most of it, but then isn’t the same true of good food, good drink, travel and most of life’s other pleasures? 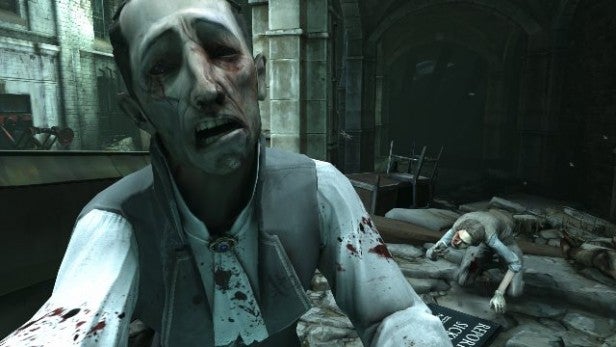 Cynically, it’s tempting to see Dishonored as the sum of its influences, and you will experience periods of Déjà vu as you recognise elements from Thief, its sequel, Deus Ex and Bioshock. And that’s without mentioning a close visual kinship with Half Life 2. Yet the strength of Dishonored’s setting and its gameplay allows it to transcend this. If it’s a game in thrall to other games, at least it’s a game in thrall to some of the very best games, and one that frequently reaches the same kind of level.

Verdict
The problem with being hyped as the heir to Deus Ex, System Shock and Thief is that you have to live up to the billing, but Dishonored hits all the right spots. It’s a game full of choices where those choices seem to matter, packed with interesting tools, and set in a world the likes of which you’ve never seen before. It doesn’t equal its influences in every single respect, and a few minor flaws affect its impact, but when all is said and done this is – with certainty – one of the finest games you’ll play this year.