Budget tablets were once depressing things. They had rubbish displays, often terrible touchscreens and none of the high-end feel of the tablets budget buyers wished they could afford. The Disgo Tablet 9104 wants to change that. It’s a 9.7in Android 4.0 ICS tablet that uses the same display panel as the iPad 2 – according to Disgo at least.

Design
Also very iPad 2-like, the Disgo Tablet 9104 has an aluminium rear. There’s something about the cool touch of metal that seems so much snazzier than dull old plastic, and it helps to make the tablet feel a bit more upmarket than the majority of cheap Android tablets. 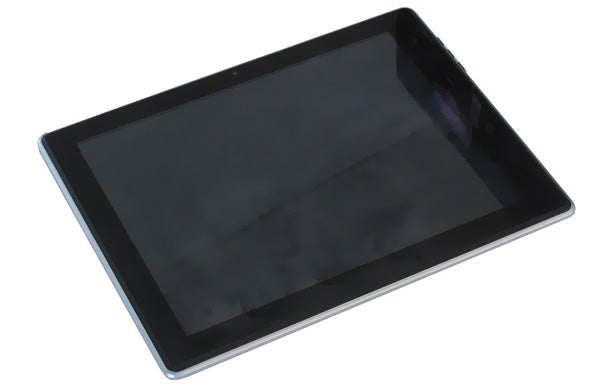 However, closer inspection reveals that it doesn’t look or feel quite like a top-end device. A tap on the rear rings a little hollow, where premium tablets tend to feel denser, more solid, and there’s little-to-no careful styling going on here.

There’s a whiff of compromised pragmatism here – Disgo seems to have exhausted itself packing-in the fancy back and “iPad 2” screen panel, lacking the extra energy needed to really make the most of them. 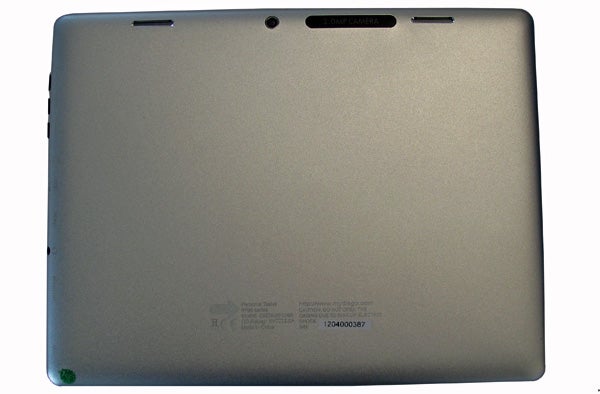 These slight missteps continue on the front, too. There’s an odd double bezel, the glass front popping out of the aluminium rear by approximately 2mm. Those used to gazing (possibly longingly) at iPads will exclaim “what’s going on here?”, but it’s actually something we got used to pretty quickly during testing.

What we found less easy to forgive is another aspect of the glass front. The Disgo 9104 does not used toughened glass, and a half-firm press on it causes an “oil slick” effect, which happens when layers within the screen come into contact with each other.

The Disgo Tablet 9104 represents a step up from the plastic-bodied budget Android tablet standard, but the same limited design methodology remains – it lacks cohesion.

Connections
What budget tablets like the Disgo Tablet 9104 often do better than big-name alternatives is in including plenty of connections. Along the right edge – when held horizontally – the tablet offers a pinhole mic, microSD card slot, headphone jack, miniHDMI, miniUSB, separate power jack and physical buttons for power on/off and volume control.

A couple of these once again show the Disgo up as a cheaper model. Hardly any tablets use the miniUSB/cylindrical power jack combo seen here – most big-name tabs feature a proprietary socket that handles battery charging and data transfer.

Also, the most prominent of the lot, the 3.5mm headphone jack – which sticks out a bit – rests under where you hands naturally rest when held in landscape. This is, of course, doubly annoying as there’s a good chance you’ll want to connect a headphone cable too. In portrait aspect the tablet feels pretty great in-hand, though. It’s 600-odd grammes, making it suitable for one-handed use for short periods.

From a purely function-led perspective, the Disgo Tablet 9104 provides the goods. It comes with 16GB of internal memory – a lot at this price – and with a memory card slot on-hand, boosting that by an additional 32GB will only cost roughly £20-30.

By the latest standards, it’s not particularly high-res, but is far, far better than the TN-based panels that have been the budget Android tablet staple. Viewing angles are great, colours are fairly vivid and accurate. Its glossy finish is even more reflective than that of the new iPad, but it’s otherwise a joy to gaze upon. 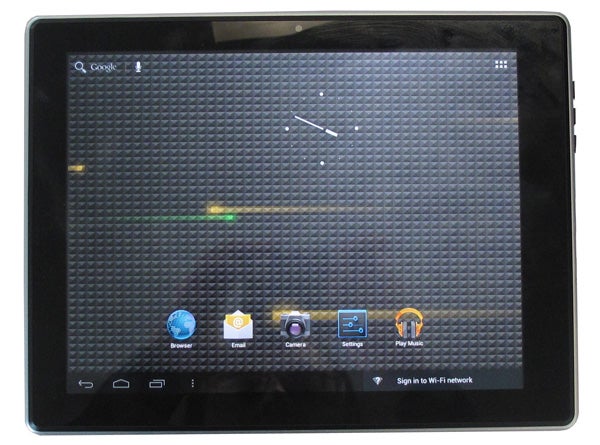 Video Playback and Performance
To support the good screen, Disgo has included fairly wide codec support in the 9104 tablet, although performance was oddly patchy. 1080p MKV files encoded at high bit-rates played back near-flawlessly, but it chugged through our basic DivX and Xvid SD-quality samples, rendering them unwatchable.

It would be easy to point the finger at the limited power of the single core 1.2GHz Boxchip Cortex A8 1.2GHz processor, but it should have easily enough grunt to handle these videos. It’s much more likely a problem of software optimisation – or lack thereof.

However, the core Android 4.0 Ice Cream Sandwich OS runs fairly smoothly, with just some slight, occasional signs of slow-down that we didn’t find too irritating. This decent performance is as much down to the 1GB of RAM as the processor – budget tablets often offer just half the amount, which tends to cause stuttery lag in Android.

Apps and Games
With a good screen and reasonable performance, day-to-day flicking around Android doesn’t feel too compromised, but there’s a big gap in its main apps menu. The Disgo tablet 9104 doesn’t have the Google Play app store pre-installed, and lacks all of Google’s official apps.

In its place, the Disgo 9104 offers a link the SlideME Market, a third-party solution. It lacks Google Play’s (admittedly limited) gloss, and its app selection is relatively poor. Android game staples Angry Birds, Cut the Rope, World of Goo and Fieldrunners are all absent, forcing you into some hack-like fiddling to get anything but generic-feeling apps and games on the tablet. 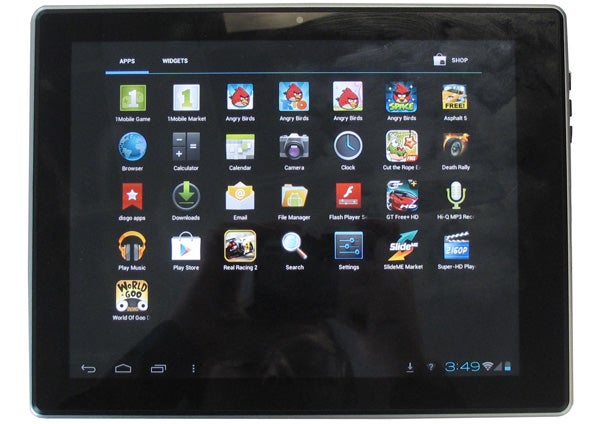 We tried installing an APK file of the Google Play market on the Disgo Tablet 9104, but it crashed upon loading each time. Manual installs of individual APK install files are possible, but working this way also wipes out the casual carefree appeal that’s of massive importance when using a tablet. And it rules-out being able to get hold of most paid-for games unless you’re an incorrigible pirate – the biggies rarely appear on third-party stores. In Disgo’s favour, it does include a web portal featuring a handful of useful essentials, accessible directly from the tablet, to get you started.

After checking these out, we spent what seemed like an age flicking through SlideME’s wares, and found very little recognisable. That within the top 10 games is an Angry Birds rip-off called Angry Birds – Pigs out, which is incidentally nothing like the real thing – is a sad indictment of the store’s wares.

Switching to the 1Mobile Market, another third-party store (installed manually), we were able to find and download many more popular games. It shamelessly apes the Google Play UI , but it’s not well optimised for tablets at present and so looks a bit ropey. Just like the bodywork, a closer inspection of the tablet’s software reveals the compromises you have to accept with the Disgo Tablet 9104. 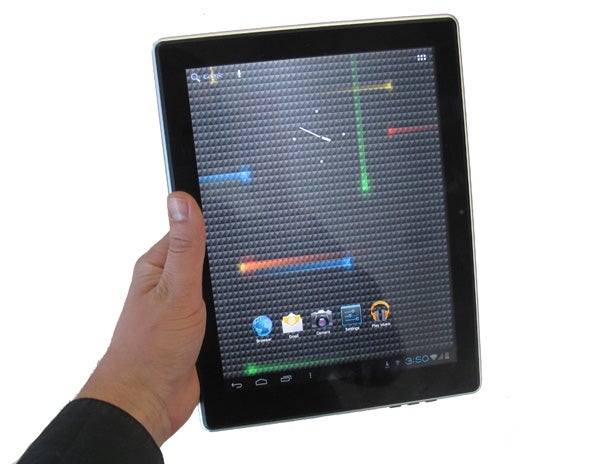 After an hour or so’s fiddling, we got a fair selection of apps and games installed including – naturally – every Angry Birds title. Here’s how they fared –

World of Goo worked well with some slight slow-down. Gameloft’s GT Racing proved incompatible, as did Real Racing 2 and Asphalt 5. Cut the Rope Experiments ran well, along with the earlier Angry Birds games, although there were occasional frame drops. Angry Birds Space showed some noticeable slow-down throughout, although not to the extent that the game became unplayable.

One of the few 3D games we got to work was Death Rally. It ran, but frame rate was an issue here too – a slight jerkiness taking some of the joy out of play. There’s a reason why almost all top-tier tablets from last year used dual-core processors, and this is it.

Battery Life
The Disgo 9104 has a non-removable battery, its power source hidden away behind the seamless aluminium backplate. It’s a 7000mAh unit, which is roughly the same size as the battery of the iPad 2. However, it only gets you around five hours of use. What we found more annoying, though, is that it’s incredibly slow to charge, taking hour after hour to creep up to full capacity.

Cameras
Keen to offer all the visible features it can, the Disgo Tablet 9104 has two cameras, a 2MP rear sensor and a VGA-quality user-facing one. For the rear one in particular, we wonder why they bothered. It uses a fixed-focus sensor, quality is poor and the slow-to-update preview display is reminiscent of the camera of a £30 phone.

The user-facing camera isn’t any better, but its presence makes a lot more sense, allowing for video calling. We’d have gladly traded-in the rear camera for Bluetooth connectivity, which is not included here.

Value
Selling for less than half the price of a 16GB new iPad, the Disgo 9104 has a pretty attractive calling card. Turn off the hyper-critical eye and its metal rear and high-quality IPS display will impress – although the latter in particular is beginning to age rapidly.

However, the longer you spend with the device, the more its other niggles start to grate. Without Google Play support, your access to top app and games is limited, and we found that its single-core 1.2GHz Boxchip processor didn’t quite have the power to get apps running as smoothly as we’d like. Keep an eye out for previous-generation Honeycomb devices, or consider the recently-announced Google Nexus 7. It may have a smaller screen, but its resolution is higher, it has the full backing of Google and it’s much, much more powerful.

Verdict
The Disgo Tablet 9104 is a big improvement on most previous budget tablets. The staple awful screen has been replaced with a good one, and the aluminium rear plate feels great in-hand. However, other serious complaints remain. There’s no Google Play access, build quality has its flaws and the CPU shows its limitations a little too often. When tablets are getting continually cheaper, it’s not a great choice.