“What a difference a day makes, twenty-four little hours…” Stanley Adams wrote these famous lyrics in 1934, but their relevance has struck once again in the world of technology. On Wednesday the Nexus 7 was unveiled as we were putting the finishing touches to this review and now Google has completely changed the game for budget Android tablets.

Design
As such it is with new eyes that we look at the Disgo Tablet 8104. On paper the company appeared to have put together a package of excellent value: a 10.1in Android 4.0 Ice Cream Sandwich tablet with HDMI and USB connectivity, a microSD expansion slot and 1.2GHz processor for just £150. Then again, even before the Nexus 7 appeared cracks appeared close up. 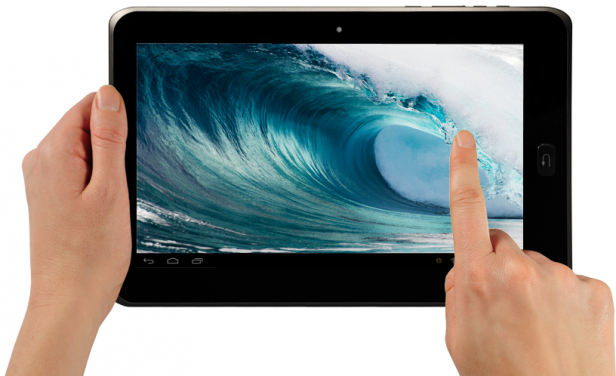 Out of the box the Disgo Tablet 8104 is immediately underwhelming, even considering its price. At just 645g it is surprisingly light (considering its screen size), though this is in part because of cheap build materials. We can compromise a great deal for a budget RRP, but the 8104 has an entirely plastic construction with a thin, textured back that does its best to make the tablet feel brittle and sound hollow.

Equally uninspiring is the unusual button layout. Disgo dumps the typical trio of front mounted Home, Menu and Back buttons in favour of a single back button with small On/Off, Menu, Volume and Home buttons positioned along the right side.

Features
In terms of connectivity things do improve. The Tablet 8104 has mini HDMI, a 32GB compatible microSD slot and headphone jack, though the choice of mini USB and charging via a barrel power connection is bizarre in an era when it has been replaced almost wholesale with microUSB. Looking inside the 8104 gives a similar sense of unease as Disgo has decided to stretch Android’s efficiency to the limit with a single core 1.2GHz Corex-A8 based processor, 512MB of RAM and 4GB of usable onboard memory.

Given this combination we booted up the 8104 with some trepidation and immediately saw the next compromise: the screen. Despite its large number of inches the display has just a 1,024 x 600 resolution and, while pixels aren’t the “be all and end all” that the new iPad may suggest, the screen quality is also low. Viewing angles are narrow, particularly vertically (in landscape mode) and colours are dull and washed out. Again this shouldn’t be a surprise and could be lived with, but a further major shortcoming is the screen’s responsiveness. 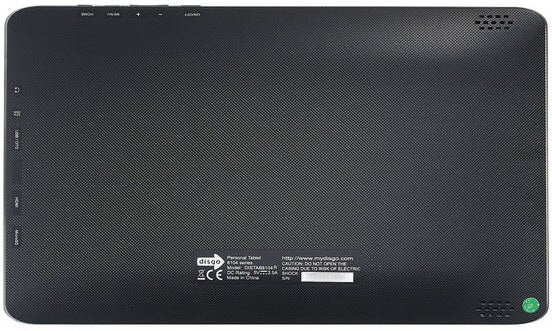 While response to swiping gestures is good, the 8104 has a major problem recognising taps, either confusing them with swipes or ignoring them all together. This is particularly noticeable when hitting smaller icons or tapping links and the result is a quick loss of faith as you start to double and even triple tap everything in order to play safe. Worse still the 8104 will often register contact with its bezel as taps on the screen which totally throws off your navigation. We’d expect this from a resistive touchscreen, but the Tablet 8104’s front is capacitive.

Come to terms with the erratic screen response and you will run into your next issue: the absence of the Google Play market store. This is a strange move from Disgo given the 8104 has a vanilla installation of Android 4.0 so we can only assume the company found a small saving in not including it. This comes at considerable detriment though as common apps like Gmail and Google Maps are missing and while the SlideME Market is included it is largely restricted to minor third-party submissions.

Remarkably we actually found Disgo’s own browser based ‘Disgo apps’
store more useful even though it contains just 19 apps at the time of
review. Most of these are essentials like Facebook, Twitter, LinkedIn,
TuneIn Radio, Skype and eBay, but it hardly allows for much exploration
and it is likely no coincidence that Angry Birds Rio is the only game
listed.

Performance
On its limited hardware Angry
Birds Rio remains playable, but there are frequent frame drops and more
complex levels introduce a level of stutter that quickly becomes
frustrating. This is reflected throughout the performance of the 8104
with menu navigation remaining reasonably fluid (at least when taps are
recognised), but web browsing can be torturous on more complex sites –
particularly when zooming in and out. To put this in context the 8104
scored just 2,995 in AnTuTu (premium phones like the dual core Galaxy Nexus and quad core Galaxy S3 hit over 6,000 and 12,000 respectively) and the £129 single core 1GHz Cotex-A8
Scroll Excel running Android 2.3 achieved 2,824 back in January.
Consequently you’ll get by on the 8104, just don’t expect to do anything
in a hurry.

Incidentally Adobe Flash support is provided though
it is largely pointless given the horsepower available and we found the
micro HDMI output of little use for video output, though it does allow
pictures to be shown off easily. 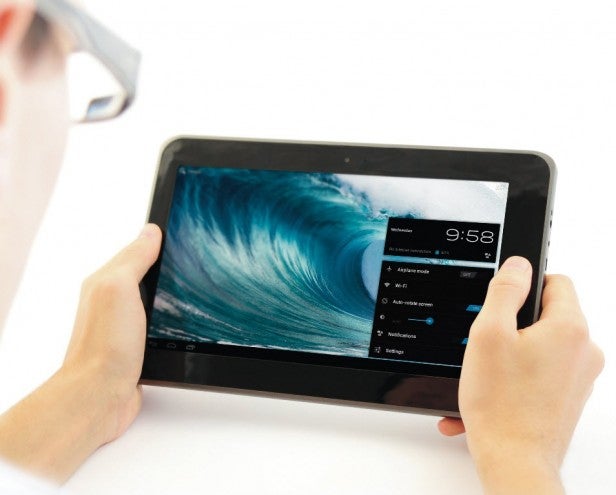 As
you might expect these pictures won’t be taken on the 8104 as it features
just a VGA front facing camera for video conferencing. The results are
extremely pixelated and good lighting is essential, but it will get you
through a Skype conversation. As such it does a job. Battery life? Again
the 8104 underwhelms compared the vast stamina we have come to expect
from this category of device. Disgo quotes up to five hours and in
practice this is about right. We found the 8104 would just about see out
the day with light to medium usage and this should be enough for most
people.

Value
All of which brings up to price and it
is here where Google has dealt Disgo and so many other budget Android
tablet makers a blow. Prior to the arrival of the Nexus 7 the 8104’s
£150 asking price meant that many of its shortcomings were acceptable
for such a small outlay. After all the screen is poor but can be lived
with, the build quality is second rate but isn’t a priority, the battery
life lasts a day and you can get the basic apps and even side load apps
via a microSD card or wait for the launch of the
Amazon Android Appstore in the UK later this year. In short: you could
get by. 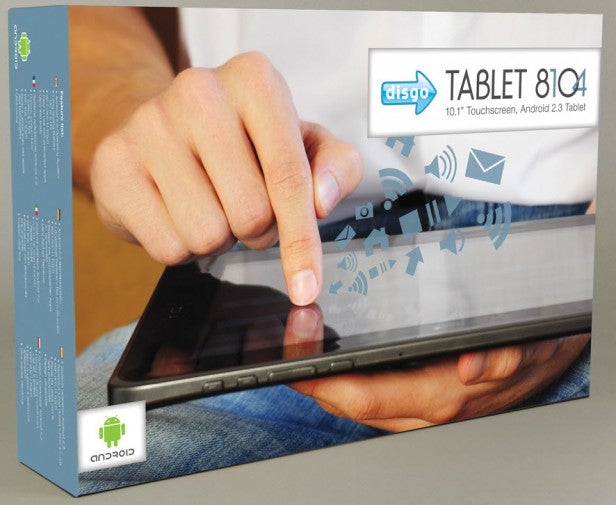 Following
our Nexus 7 preview however we have found the Asus-made device to be a
game changer. It blows away the 8104 in every area except screen size,
yet makes up for this with a higher quality IPS panel and larger 1280 x
800 native resolution. Disgo isn’t the only manufacturer to be hit, the
keenly priced
Kindle Fire is likely to be the biggest name casualty, but that will
be of little comfort to Disgo as its 8104 has been rendered obsolete.

Verdict
The
Disgo Tablet 8104 is a low quality device which aims to succeed on
price alone. Build materials, screen response and performance are all
substandard and the strange decision to remove the Google Play backfires
as the company provides less than 20 apps in its own store and third
party solutions are obscure. On the plus side the 8104 can be used for
rudimentary web surfing and key apps like Facebook, Twitter and Skype
are available. At £150 this used to be enough… until the Google Nexus 7
came along.