Available on PC through Steam
I’ve seen a lot of tutorials for a lot of shooters in my time, but I can’t remember another one where ‘don’t be a dick’ is laid down as the key gameplay principle. Splash Damage means it too. Almost everything in Dirty Bomb is designed and structured to encourage you to not be a dick wherever possible. This is an objective-based game that actually makes players care about objectives, and a class-based game where playing a role and using your abilities is important.

‘Don’t be a dick’ even seems to extend to the game’s own business model. Dirty Bomb is free to play, but it neither makes things impossible for those who won’t pay for extras, nor goes all-out on pay-to-win tactics. Like Blizzard’s Hearthstone and Heroes of the Storm, you can have a good time playing without paying anything at all. 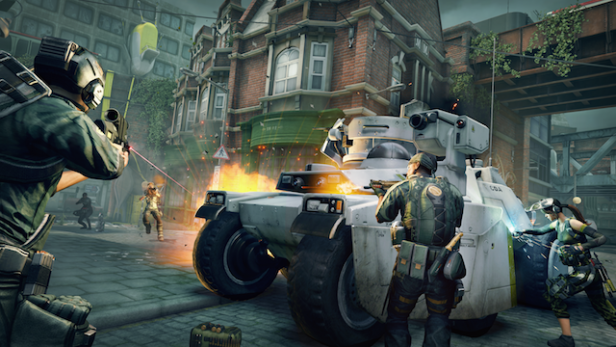 This is also a return to roots for Splash Damage after the innovative but disappointing Brink. Like Mirror’s Edge, Brink was ahead of its time, combining FPS gameplay with parkour-inspired movement to mix things up a little. Unfortunately, like Mirror’s Edge, Brink never quite came together as a whole, and didn’t reach the kind of audience it deserved. Dirty Bomb is a more conservative online shooter, but one that still has its own ideas.

It’s not hard to see how it links back to Wolfenstein: Enemy Territory and Enemy Territory: Quake Wars. Like them it’s an objective-based shooter, where one team has to complete a series of objectives – destroy this, plant explosives here, grab this, enable that – while the other team works to stop them. Also like them, it’s heavily class-based, requiring and encouraging players to adopt and then play a role, using character-specific skills.  Dirty Bomb hits you with a cast of heroes rather than a smaller number of classes, but they all still fit into general medic/assault/heavy weapons/engineer/sniper moulds. 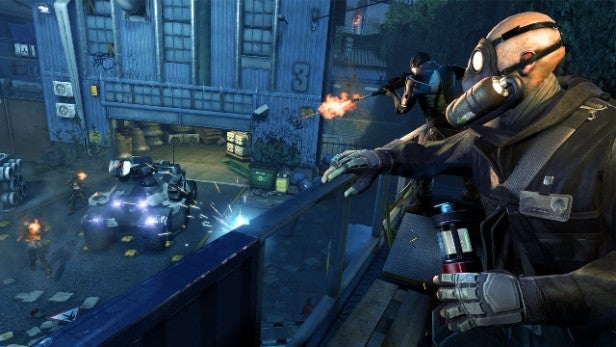 Where it gets more innovative is in how the individual characters work out, and how this plays into the game’s business model. Dirty Bomb has 19 different Mercs to pick from, and you pick three to take into any match. These you can swap between with each respawn, just by tapping the F1 to F3 keys.  Each has a main and secondary weapon plus two abilities, activated by pressing the Q and E buttons.

Cleverly, these differ from Merc to Merc, so that Aura, the standard Medic, comes with a deployable health station and a set of resuscitating defibrillators, while Sawbonez has tossable health packs instead of the health station. Other characters come packing different airstrike options, turrets, grenades or mines. What’s more, different Mercs can work with each map’s interactive elements at different speeds, repairing machinery or disarming or planting explosives. In a game where objectives need to be completed quickly, often under enemy fire, fast interactions can be a real advantage. 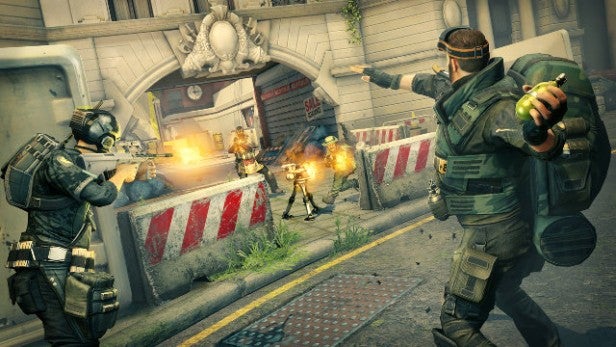 Two Mercs are permanently unlocked for every player, while another three are temporarily available on a rolling roster. To unlock another Merc permanently, you’re going to have to pay up. Here’s the good news: you don’t necessarily need real money. Performing well, doing your job, sticking with the team and completing/defending objectives will earn you XP, new levels and credits. Completing missions, like winning three games or using the same character so many times, will also earn you credits. With time and effort, you can rack up enough to purchase a new Merc.

What’s more, you’ll also be rewarded with boxes full of goodies, including Loadout cards which work as variants on the basic Merc, providing them with different weapons, abilities and perks. These are graded in order of rarity and potency from Lead to Obsidian, though it’s worth noting that choosing the highest available might mean missing out on a favourite weapon or ability. 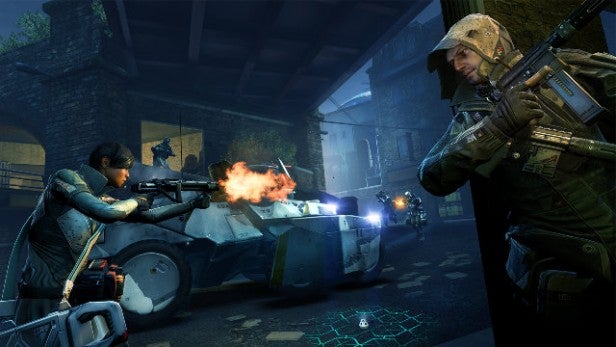 You can, of course, just save yourself the bother and pay up for this stuff, or for Credit Boosters which multiply how many given credits you earn while active. In a way it’s pay-to-win, and some disgruntled players are already noting how long it takes to amass enough credits to unlock characters and Loadouts, but Dirty Bomb doesn’t seem to rub it in your face. No character seems so overpowered that you can’t take them down through skill or force of numbers. It’s a bit like Hearthstone, where paying out for cards will help you build a stronger deck, but there are ways and means of building an effective roster without splashing out, even if you just stick to the rotating Mercs and boost them up with Loadouts.

What’s more impressive is that this really doesn’t look and feel like a free to play shooter. Sure, the graphics are slightly dated – I suspect Splash Damage has opted to cater for a wider audience rather than implement the most spectacular visuals possible – but they have the kind of clean looks and arty style that the developer brought to Brink. In fact, there’s something Time Splitters-esque about the overall look. The setting – a post-apocalyptic London – also helps. With its mix of accents and its twisted takes on familiar-looking locations, Dirty Bomb doesn’t have the tired, generic feel that spoils so many of its rivals. 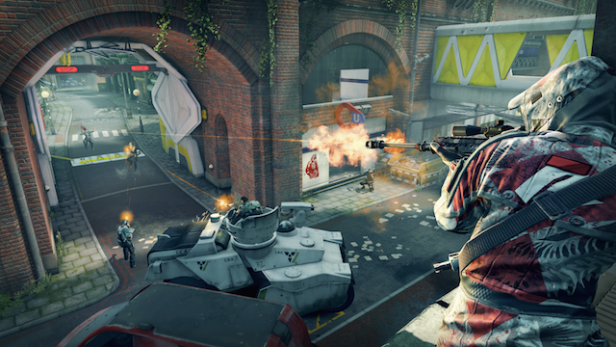 Movement and combat feel good too. Lighter characters sprint fast, dodge quickly and jump high. Heavier characters don’t but pack a meaner punch. Some of the weapons lack heft and impact, but there’s a nice balance between lightweight SMGs, assault rifles and carbines, and snipers don’t seem overpowered with one-shot kills. In a lot of ways, Dirty Bomb feels like a return to run-and-gun, shoot-from-the-hip blasting after years of CoD and Battlefield. Call it backward-looking, but it feels like a smart move.

And there’s just as much intelligence in the map design. At first, Splash Damage seems a little too hell-bent on funnelling both teams towards each other, creating choke points where one team dominates while the other gets wiped out over and over again. Spend more time with the game, though, and you soon discover alternative routes, sneaky shortcuts and ways of outflanking the other team that might take a while, but can disrupt their strategy.

See also: PS4 backwards compatibility – Can I play PS3 games on my PS4? 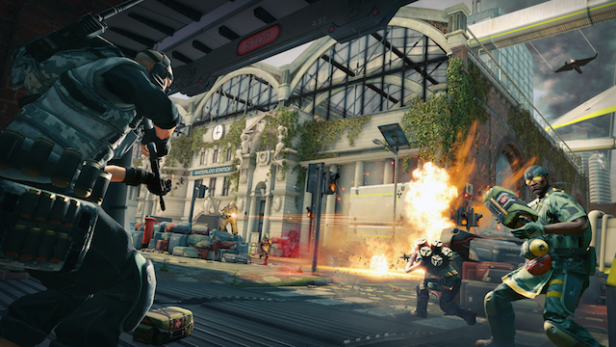 Yet perhaps the biggest compliment I can play Dirty Bomb is that the whole ‘Don’t be a dick’ mantra seems to work. Players really are working together, focusing on objectives and supporting each other in the kind of sensible, organic way they do in co-op shooters like Destiny.  There are fewer players focusing on headshots or the Kill/Death ratio, and more focusing on making sure that their team wins. This is rarer and harder than you might think, and we hope Splash Damage can keep it going.

We’re not going to pretend that Dirty Bomb will be the next big thing in shooters or that it’s a genuinely revolutionary game. And while we’ve been told that this open beta is effectively the launch, there are still things that need tweaking. A few individual weapons could do with a mild boosting or nerfing, while some airstrike-style weapons seem painfully overpowered, particularly in missions where a slow-moving vehicle needs to be escorted, or where a key objective lies in fairly open ground. All the same, the bare bones of Dirty Bomb are very strong, while what’s hanging off them is already well developed. It’s solid, enjoyable, mostly well-balanced and entertaining – which is more than you can say for some paid-for shooters when they launch.

Verdict
Dirty Bomb is off to a promising start. It’s very slick, feature-packed and polished for a free-to-play shooter, and while there are elements of pay to win in the business models, you can still have a good time and build up your Mercs without splashing out a lot. Most of all, in returning to its team-based, objective-based roots, Splash Damage has crafted a fast-paced, enjoyable shooter where everything meshes to get players to work together.  It’s definitely worth your time.