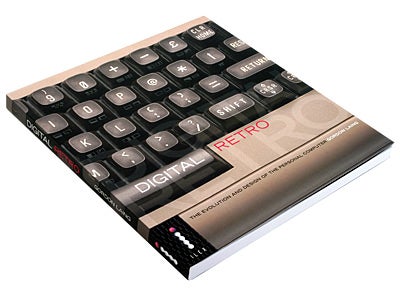 Like myself, Gordon Laing is a former Editor of Personal Computer World magazine. Also like myself, Gordon has owned, used, borrowed or reviewed just about every personal computer to hit the shores of the UK, and a few that didn’t. Needless to say, Gordon knows his stuff when it comes to the history of personal computing, and I’m pretty sure that Digital Retro was as much a labour of love as it was a commercial venture for him.


Before I get onto content, let me say that this is a beautifully designed book, and it wouldn’t look out of place on even the most style conscious technophobe’s coffee table. Even my wife had a flick through the pages and said that she really liked it. That said, having lived with me for all these years, she’s probably not completely indicative of her gender – this is where I get a barrage of email from indignant female techno-junkies! Hey, it might be a cliché, but it does tend to be boys that obsess about computers and gadgets more than girls.


Anyway, as I was saying, the book is beautifully designed, with a huge selection of illustrations for each hardware landmark. The layout of the information is also very clear and well structured. The text is broken up into categories – there’s an introduction to the hardware, a rundown of the company history and the technical specifications. Gordon then throws in a “What happened next” section that explains how the product developed through its lifetime. Finally, there’s a “Did you know?” section where Gordon recounts interesting snippets of information surrounding the device. 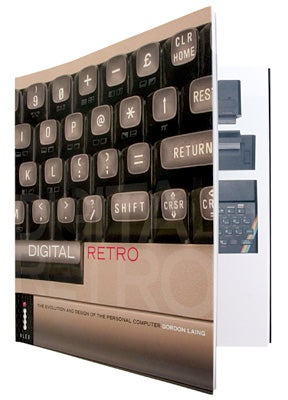 Digital Retro covers the period from 1975 through to 1988, but some of my favourite hardware is conspicuous by its absence, like the NEC PC Engine. This was a groundbreaking machine that launched in 1987, although it never saw a European release and I had to import mine direct from Japan. It was the size of a couple of CD cases and knocked the competing products from Nintendo and Sega into a cocked hat, but I digress. Gordon’s story starts with the MITS Altair 8800, a machine that cost almost $500 pre-built in 1975, and runs all the way through to the NeXT Cube which sold for a not insignificant $6,500 in 1988.


Flicking through the pages you’ll find some instantly recognisable boxes like the Apple II, the Atari VCS and the Sinclair ZX-81. But it’s the more obscure hardware that puts a smile on the face of those that are geeky enough to recognise it. Take the Oric-1 for example, a machine that most modern computer users will never have heard of, but I can still remember wandering into WH Smith, setting up a loop using the “Zap” sound effect and watching the sales staff trying to figure out how to make it stop.

This book also brings back memories of the playground arguments that used to rage every day. The “my computer is better than yours” argument seemed to continue for years, spanning a multitude of hardware, but there were two instances that will always stand out. First there was the Sinclair ZX Spectrum vs. the Commodore 64 debate – this was a very hard fought battle, and although most Spectrum owners knew deep down that the Commodore was a more powerful machine, they did have the advantage of a wider and cheaper software base. The second landmark battle was between the Atari ST and the Commodore Amiga – I was an Atari ST owner, and although I would never have admitted it at the time, the Amiga did turn out to be the better machine, but it was also far more expensive.

Gordon conducted hundreds of interviews with the people behind most of the machines in this book, many of which threw up question marks as to who was actually responsible for the hardware that eventually made it to market. One really interesting aspect of Digital Retro is that if you read it cover to cover, you’ll notice just how incestuous the personal computer industry has been over the years, with many key figures moving around the industry from one company to another.


The beauty of a book like this is that you can just dip into it at random and while away half an hour reminiscing. Flick through to the ZX-81 page and I guarantee that memories will flood back of spending hours typing in code from a magazine, only for the 16KB expansion pack to fall out, resulting in all your hard work going to waste. Or maybe you’ll go all misty eyed at the thought of hearing your Intellivision blurting out “Mattel Electronics Presents – B17 Bomber” from the bizarre sounding, but very innovative at the time, Voice Synthesis Module.


Digital Retro is a truly great book, and I’m not just saying that because Gordon Laing is an old friend of mine. Personal relationships aside, had I seen Digital Retro while wandering around a book shop, I would have definitely picked it up, definitely smiled with amusement and recognition and definitely carried it to the counter and handed over some hard earned cash so that I could take it home with me.


Digital Retro retails for £19.99, but you can get it from Amazon, via Gordon’s own portal for a very reasonable £13.96. If you’ve been caught up in the world of the personal computers for years like me, or even if you have a passing interest in the development of the home computer, Digital Retro is a “must have” item.


If you’ve been mucking around with computers for years, Digital Retro is the sort of book that will spark off memories of achievements and frustrations in equal measures. The slick design and illustrations make it an attractive coffee table book for anyone, whether you’re a sucker for technology or not.